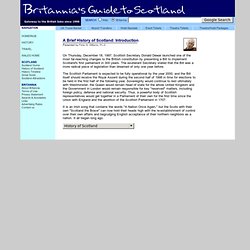 The exuberant Secretary stated that the Bill was a more radical piece of legislation than dreamed of only one year before. The Scottish Parliament is expected to be fully operational by the year 2000, and the Bill itself should receive the Royal Assent during the second half of 1998 in time for elections to be held in the first half of the following year. Sovereignty would continue to rest ultimately with Westminster; the Queen would remain head of state for the whole United Kingdom and the Government in London would remain responsible for key "reserved" matters, including foreign policy, defense and national security. 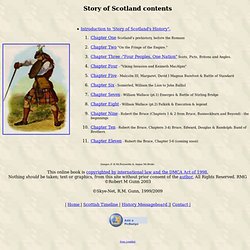 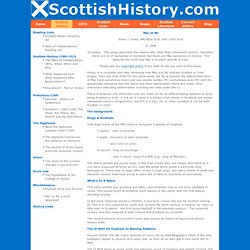 Innes, MA(Hons Scot. Hist.) FSA Scot Synopsis: This essay describes the reason why other than nineteenth century migration, there are no O' surnames in Scotland, but there are Mac surnames in Ireland. This debunks the myth that Mac is Scottish and Mc is Irish. Please see my copyright policy if you wish to cite any part of this essay. Firstly, it is complete and utter nonsense that Mac and Mc indicate Scottish or Irish origins.

There is however one distinction you can make as far as differentiating between a name being Scottish or Irish. ScottishHistory.com. Scottish History (scottishhistory) A Brief History Of Scotland. Undiscovered Scotland: Home Page. Scotland's History - Explore 5000 years of Scottish history. History of Scotland. Scotland was first decisively settled after the end of the last glacial period (in the paleolithic), roughly 10,000 years ago. 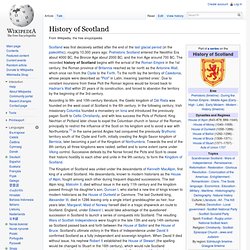 Prehistoric Scotland entered the Neolithic Era about 4000 BC, the Bronze Age about 2000 BC, and the Iron Age around 700 BC. Газета «Английский язык» № 16/2008. Scotland For Visitors -History - Timeline - Vikings to 12 Century Scotland. Edinburgh history timeline 17th century. 1600: Scotland adopts the Gregorian calendar. 1603: The Union of the Crowns: James VI of Scotland becomes James I of England. 1614: John Napier invents logarithms and publishes a book promoting their use in mathematics. 1615: The Jesuit John Ogilvy is hanged for saying Mass. 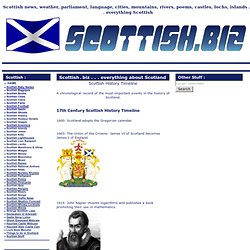 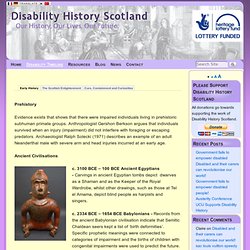 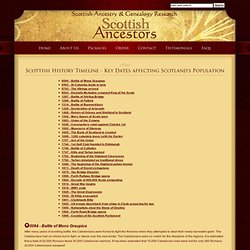 The Caledonians had no choice but to fight, or starve over the next winter. The Caledonians were no match for the discipline of the legions. It is estimated that a total of 20,000 Romans faced 30,000 Caledonian warriors. It has been estimated that 10,000 Caledonian lives were lost for only 360 Romans. 20,000 Caledonians escaped! Columba, after being banished from Ireland, landed in Iona and established a monastery in which the strict regime of prayer, religious study and self-denial he practised became the Celtic way for future monks and christianity in Scotland. Gazetteer for Scotland: Scottish Timeline. Timeline of prehistoric Scotland. Scottish History: Time Line. Skyelander's COMPLETE Scottish History Timeline. 1601 Lowland "Adventurers" in Isle of Lewis are soundly defeated. 1602 Battle of Glenfruin. 1603 Union of the Crowns James VI of Scotland becomes James I of England, bringing about the Union of the Crowns. 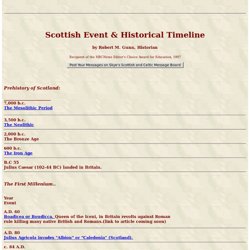 This was not an altogether welcome move in much of Scotland or England. 1605 Renewed attempt to colonise the Isle of Lewis by Lowland "Adventurers". 1607 MacKenzie of Kintail aquires Lewis from the MacLeods of Lewis by no MacLeod heir and by marriage to a MacLeod of Lewis. 1609 "Statutes of Iona". 1614 Islay granted to Campbell of Cawdor by Crown. 1617 James VI (on his only return to Scotland) tactlessly lectures his countrymen on the "superiority of English civilisation". Scottish History Timeline. 84 AD The Romans defeat the native people at Mons Graupius. 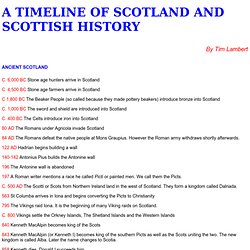 However the Roman army withdraws shortly afterwards. 197 A Roman writer mentions a race he called Picti or painted men. We call them the Picts. C. 800 Vikings settle the Orkney Islands, The Shetland Islands and the Western Islands. SINCLAIR HISTORY AND GENEALOGY: Timeline of Scottish History. The Sinclair family has played a major role in the history of Scotland. 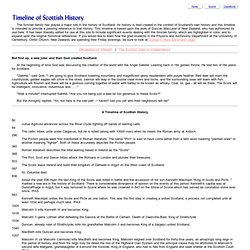 Its history is best viewed in the context of Scotland's own history and this timeline is intended to provide a passing reference to that history. This timeline is based upon the work of Duncan MacLeod of New Zealand, who has authorized its use here. It has been liberally edited for use at this site to include significant events dealing with the Sinclair family, which are highlighted in color, and to expand upon the original historical references.

If you would like to learn how the grad students in the Physics and Astronomy Department at the University of Canterbury, Christ Church, New Zealand, are spending their Friday evenings, be sure to look at Duncan's "Beer Seminars" page! Declaration of Arbroath | The Scottish Wars of Independence. Scottish history timeline. Some Dates in Scottish History from 1745 to 1914: 1746 The second Jacobite rebellion failed when the supporters of James III's son Charles Edward--the legendary Bonnie Prince Charlie, helped in his wanderings by Flora Macdonald-- were defeated by the forces of the Duke of Cumberland (son of George II) at the battle of Culloden. Severe reprisals earned Cumberland the sobriquet of "butcher. " 1747 Act of Proscription, repealed 1782, banned Highland dress and martial music.

English was imposed in the schools. 1740s-1761 Scottish votes were largely controlled by Duke of Argyll, using a system of bribery and influence-peddling. 1750-1780 period of economic growth, with population increase, rising farm prices, and improved agricultural methods and communication, including roads and canals. Scotland For Visitors -History - Timeline - Beginning to St Ninian.

A Timeline of Scottish History Scotland has a long and intriguing history. This timeline chronicles the major events in Scotlands history starting at the beginning and reaching the birth of St Ninian in A.D. 350. Pre Romans- See article below(its easier than explaining) A.D 79 - Julius Agricola begins the Roman conquest of Northern Britain A.D. 84 - Battle of Mons Graupius A.D. 85 - Start of the building of a line of forts between the Clyde and the Forth by Agricola A.D. 105 - Romans forced out of Southern Scotland A.D. 126 - Disappearance of the 9th Legion A.D. 127 - Completion of Hadrians Wall A.D. 139 - Antonine Wall begun A.D. 143 - Completion of Antonine Wall A.D. 180 - Romans retreat behind Hadrians Wall A.D. 196 - Maetae overrun Hadrians Wall A.D. 208 - Emperor Septimius Severus rebuilds Hadrians Wall and invades Caledonia A.D. 350 - St Ninian is born (it is believed that this date is accurate)