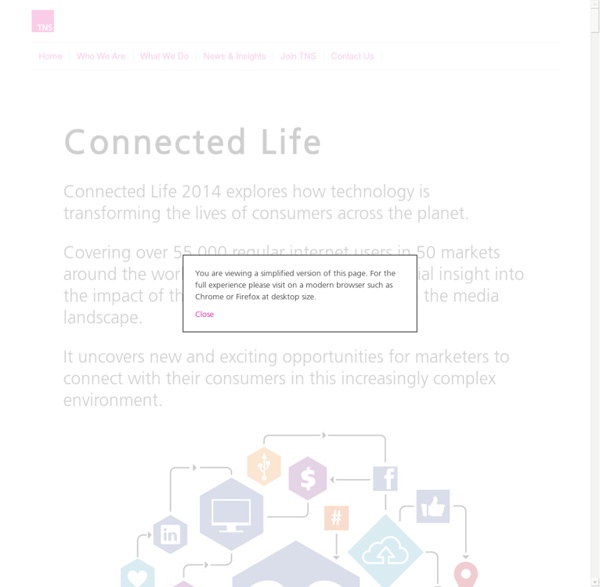 Click here to go to the latest Digital Life website, The largest global study into people's attitudes and behaviours online. Click here to watch our new animation about the 6 Digital Lifestyles. Do you have a question about Digital Life? Why not tweet us it. @tns_global How this study is defined (caveats)

Beyond digital - Connecting media and entertainment to the future Connectedness is pervading consumers’ daily lives, and they continue to crave even more. People check their phones continuously, virtually anywhere they find themselves. Maintaining their digital connections is more important than ever before.

revisit revisit is a real–time visualization of twitter messages (tweets) around a specific topic. You can create your own twitter wall at a conference or an ambient display at your company or whatever use you come up with. In contrast to other twitter stream tools, it provides a sense of the temporal dynamics in the twitter stream, and emphasizes the conversational threads established by retweets and @replies. The brandgym blog Cake brand Mr Kipling may be about to ditch the slogan its been using for almost 50 years, according to an interview given by the CEO of brand owner Premier Foods, Gavin Darby. He admitted it is "possible" that the strapline – "Exceedlingly good cakes" – may be missing from a forthcoming marketing campaign, according to reports here. [For non-UK readers, Mr Kipling make a range of traditional British cakes sold in boxes in supermarkets, with the most famous one probably the cherry bakewell. Yes, British cuisine at its best.]

How To Create A Viral Meme [Infographic] Online backup company Mozy has released an infographic that breaks down the history of the meme, how to create a viral meme, and the monetary payoff of these internet characters. It starts with the origins of memes, which were defined in Richard Dawkins’ 1976 book The Selfish Gene and are short for the Greek word ‘mimeme’ meaning ‘imitated thing.’ The infographic shows one of the first known LOLcats from the 1870s, created by Harry Frees, who took photographs of his pet cats and added text to turn them into greeting cards. It also lays out the ingredients of a viral hit, looks at the money in memes, and examines the top six types of meme. You can check out the infographic below:

Infosthetics: the beauty of data visualization The beauty of information aesthetics: Visual Poetry 06 by Boris Müller. " Boris Müller's newest 'visual theme' for a annual international German literature festival. 2006 the theme consisted of beautiful visualizations of the poetry texts themselves. Each word corresponded to a numerical code by adding the alphabetical values of its letters together. This number was mapped onto the position on a circle, and marked by a red dot. Gray lines connect the dots in the sequence the words appear in the poem.

Broadcast moves beyond the TV set as 17% of consumers get network content on multiple screens People who watch a network’s video online also spend 25 percent more time watching that network on their television sets, according to a new comScore study. From the report: Ten thousand people participated in the comScore study. That finding comes from one of the first studies using a new method that examines how a single group of people consume video across TV, the Internet and mobile devices. 12 Inspiring Visual Search Engines 12 Inspiring Visual Search Engines We all know that a picture is worth a thousand words. Beyond the usual lines of text and blue links, visual search engines can present results and relationships that are more quickly grasped, as well as flexible ways to browse and explore. As the web becomes increasingly image- and video-based, it just makes sense to scan certain results visually. Here are 12 visual search engines, each providing a different set of benefits we enjoy.

Statistical Visualization For his book The Visual Miscellaneum, David McCandless, along with Lee Byron, had a look at breakups on Facebook, according to status updates. They looked for the phrase "we broke up because" in status updates, and then graphed the frequencies over time. Why they couldn't just look at updates to relationship status, I'm not sure.

Mobile Devices and News Consumption: Some Good Signs for Journalism By Amy Mitchell & Tom Rosenstiel of PEJ, and Leah Christian of the Pew Research Center Each of these technologies offers a separate set of features, conveniences and potential uses. But less is known to date about how people use these devices — whether they behave differently on different platforms and what the move to mobile might mean for news and journalism and the notion of a common experience or public square. Past research found much of the desktop news experience was built around search — people looking for what they need or want to know right now, which tilted influence (and revenue) toward aggregators such as Google.

Work » GOOD » Driving Is Why You're Fat Infographic Aug 10, 2010| Infographics Exercise more and lose weight. Still, many people spend most of their time either behind a desk or driving to or from where that desk is located. A few states buck that trend with large cities that allow for more walking, biking, and commuting via public transportation, but are their citizens any more fit? This is a look at how people get to work in various states, alongside those states' obesity rates.

indiemapper is free - Axis Maps Blog by David Heyman on January 5, 2012 With the start of 2012, we’ve decided to make indiemapper free to use. Since indiemapper launched in 2010, our business has grown and changed to where supporting and maintaining indiemapper is no longer a major part of what we do at Axis Maps every day. We’re making indiemapper free so that it can continue to exist as a useful tool for map-makers while freeing us up to be as awesome as possible at our custom cartography business. State of the Media: U.S. Digital Consumer Report Born sometime between the launch of the VCR and the commercialization of the Internet, Americans 18-34 are redefining media consumption with their unique embrace of all things digital. According to Nielsen and NM Incite’s U.S. Digital Consumer Report, this group—dubbed “Generation C” by Nielsen—is taking their personal connection—with each other and content—to new levels, new devices and new experiences like no other age group. Platforms For Digital Access Consumers have more choices than ever for accessing their digital content. As more devices become increasingly connected, the ability to access the same pictures, videos or music files across multiple devices has become a valuable feature.

The 4 distinct personalities of connected consumers Connected consumer. It's nearly impossible to separate these two words today. Whether it's checking out online reviews of products on a tablet, comparing notes with friends on Facebook about what to buy, or pulling up a smart phone app to see whether a nearby store has a product on the shelves -- or multitasking several things at once -- everything about what it means to be a consumer is changing.