Dopamine, its aftermath, constructive ways of dealing with addic

Nootropics. Cycloserine. Cycloserine (4-amino-3-isoxazolidinone) is a drug sold under the brand name Seromycin. 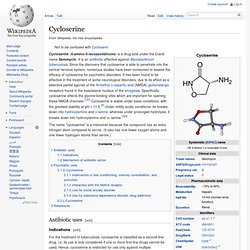 It is an antibiotic effective against Mycobacterium tuberculosis. Since the discovery that cycloserine is able to penetrate into the central nervous system, numerous studies have been conducted to assess the efficacy of cycloserine for psychiatric disorders. It has been found to be effective in the treatment of some neurological disorders, due to its effect as a selective partial agonist of the N-methyl-D-aspartic acid (NMDA) glutamatergic receptors found in the basolateral nucleus of the amygdala.

Specifically, cycloserine affects the glycine-binding sites which are important for opening these NMDA channels.[1][2] Cycloserine is stable under basic conditions, with the greatest stability at pH = 11.5.[3] Under mildly acidic conditions, ite breaks down into hydroxylamine and D-serine, whereas under prolonged hydrolysis, it breaks down into hydroxylamine and DL-serine.[3][4] Antibiotic uses[edit] Selegiline. Medical uses[edit] 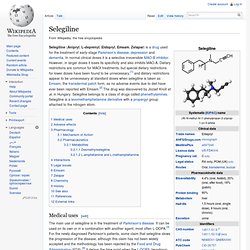 Benzofuranylpropylaminopentane. BPAP may also refer to the mode of mechanical ventilation known as BPAP or BPAP (-)-1-(Benzofuran-2-yl)-2-propylaminopentane ((-)-BPAP)[1] is a drug with an unusual effects profile. 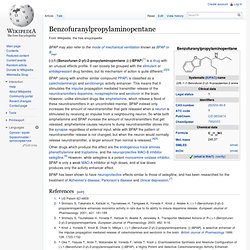 It can loosely be grouped with the stimulant or antidepressant drug families, but its mechanism of action is quite different.[2][3] Other drugs which produce this effect are the endogenous trace amines phenethylamine and tryptamine, and the neuroprotective MAO-B inhibitor selegiline.[6] However, while selegiline is a potent monoamine oxidase inhibitor, BPAP is only a weak MAO-A inhibitor at high doses, and at low doses produces only the activity enhancer effect.

BPAP has been shown to have neuroprotective effects similar to those of selegiline, and has been researched for the treatment of Alzheimer's disease, Parkinson's disease and clinical depression.[7] Amantadine. Amantadine (trade name Symmetrel, by Endo Pharmaceuticals) is a drug that has U.S. 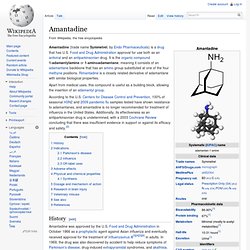 Food and Drug Administration approval for use both as an antiviral and an antiparkinsonian drug. It is the organic compound 1-adamantylamine or 1-aminoadamantane, meaning it consists of an adamantane backbone that has an amino group substituted at one of the four methyne positions. Rimantadine is a closely related derivative of adamantane with similar biological properties. Apart from medical uses, this compound is useful as a building block, allowing the insertion of an adamantyl group. According to the U.S. History[edit] Amantadine was approved by the U.S. Indications[edit] Parkinson's disease[edit] Dnld/ExpertGuidelines_000.pdf. Welcome to the Trichotillomania Learning Center. Dermatillomania. Excoriation disorder (also known as dermatillomania, skin-picking disorder, neurotic excoriation, acne excoriee, pathologic skin picking (PSP), compulsive skin picking (CSP) or psychogenic excoriation[1][2]) is an impulse control disorder characterized by the repeated urge to pick at one's own skin, often to the extent that damage is caused. 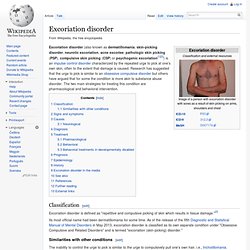 Research has suggested that the urge to pick is similar to an obsessive compulsive disorder but others have argued that for some the condition is more akin to substance abuse disorder. The two main strategies for treating this condition are pharmacological and behavioral intervention. Classification[edit] Excoriation disorder is defined as "repetitive and compulsive picking of skin which results in tissue damage. Dermatillomania - Skin Picking - Causes. As you sit before your favorite mirror, picking endlessly and by the hour at the skin on your face, neck, scalp, arms, shoulders, or wherever, you may wonder where did this strange behavior come from, in the first place. 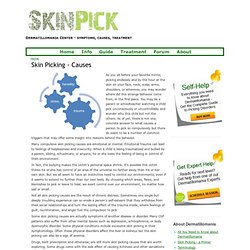 You may be a parent or schoolteacher watching a child pick unconsciously or uncontrollably and wonder why this child but not the others. As of yet, there is not one, concrete answer to what causes a person to pick so compulsively but there do seem to be a number of common triggers that may offer some insight into reasons behind the behavior. Many compulsive skin picking causes are emotional or mental. Emotional trauma can lead to feelings of helplessness and insecurity. When a child is being traumatized and bullied by a parent, sibling, schoolmate, or anyone, he or she loses the feeling of being in control of their environment. In fact, the bullying makes the victim's personal space shrink. Skin Picking - Dermatillomania. Compulsive Skin Picking - Dermatillomania. Written by M. 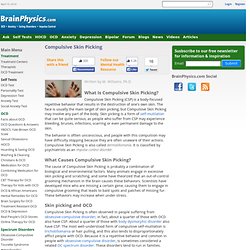 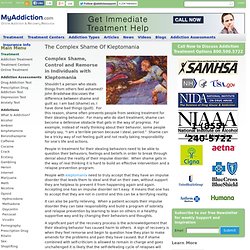 John Bradshaw discusses the difference between shame and guilt as: I am bad (shame) vs. I have done bad things (guilt). Self-Esteem. Obviously, increasing a person’s self-esteem is not as easy as repeating positive statements over and over again, such as “I’m a good person.” 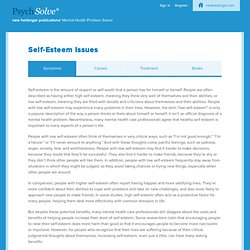 Real improvements in self-esteem come from challenging the self-critical thoughts that caused the problem in the first place and engaging in behaviors that have been avoided. These “lifestyle tests” are the prime focus of cognitive behavioral therapy. Cognitive behavioral therapy (CBT) is a form of treatment that combines elements of both cognitive therapy and behavior therapy. Cognitive therapy examines the way people’s thoughts about themselves, others, and the world affect their mental health. Behavior therapy investigates the way people’s actions influence their own lives and their interactions with others. The CBT treatment for self-esteem focuses on addressing the causes of the problem. Sexy-people-take-action. Sexy people please our aesthetics.

Charisma Arts. Compassionate-Mind Social Confidence. Get Out of Your Mind & Into Your Life. Borderline Personality Disorder. Borderline personality disorder is characterized by emotion dysregulation, meaning quick, frequent, and painful mood swings that are beyond the control of the person with the problem. 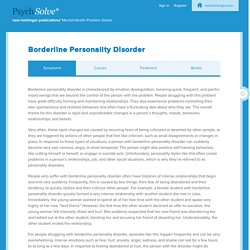 People struggling with this problem have great difficulty forming and maintaining relationships. They also experience problems controlling their own spontaneous and reckless behaviors and often have a fluctuating idea about who they are. The overall theme for this disorder is rapid and unpredictable changes in a person’s thoughts, moods, behaviors, relationships, and beliefs. Autoimmune Neurological Disorders. Today's most exciting frontier of OCD research stems from a remarkable finding reported in 1997 by psychiatrists Susan Swedo, Judith Rapoport and colleagues at the National Institutes of Mental Health. Neurobiology. Imagine being unable to control your thoughts and feeling powerless until you perform specific acts or rituals. This is the situation people with obsessive-compulsive disorder (OCD) confront daily.

According to Dr. Jeffrey Schwartz’s March/April 1997 Science & Medicine article, entitled "Obsessive-Compulsive Disorder," scientists have discovered new evidence that explains some causes of OCD. Self-Help Article: Mindfulness. By Dr. Jeffrey Schwartz There are very effective treatments available for treating obsessive compulsive disorder, and the suffering from the symptoms can be very profound--even to the point where people seriously contemplate ending their lives through suicide in an attempt to escape them.

There are now ways to treat this disorder effectively, combining both the use of medication as well as things you can learn to do with your mind itself. Mental training can be really effective in helping people with obsessive compulsive disorder change not only their functioning and the pragmatic clinical course of the disorder, but also as we're going to see change the brain itself. This brings us to the second aspect, perhaps as important as the first: the profound implications of medical science demonstrating that what people do with their mind affects how the brain works. Another important brain structure for understanding OCD is the caudate nucleus. Four Steps.

If you have obsessive thoughts and compulsive behaviors, you will be relieved to learn of significant advances in the treatment of this condition. Over the past twenty years, behavior therapy has been shown to be extremely effective in treating obsessive-compulsive disorder (OCD). The concept of self-treatment as part of a behavioral therapy approach is a major advance. In this manual, I will teach you how to become your own behavioral therapist. Dr. Gorbis' Intensive OCD Program: It Works! By Eda Gorbis, Ph.D., M.F.CC. with Daniel Anan’yev, B.S. An intensive program that I developed at the Westwood Institute for Anxiety Disorders, Inc. for the treatment of patients with Obsessive Compulsive Disorder (OCD) combines modern exposure treatment with self-analytical writing.

This program has consistently and significantly improved the condition of OCD patients who have been treated with it. Schwartz Technique for Rewiring Compulsions.