Feeling unproductive? Maybe you should stop overthinking.  - Adolos. In order to get something done, maybe we need to think less. 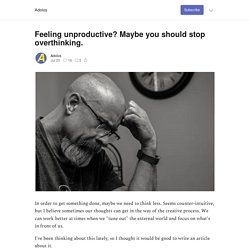 Seems counter-intuitive, but I believe sometimes our thoughts can get in the way of the creative process. What should the EU be? Le foto delle vie piene di untori - Giap. This is why everyone is hoarding toilet paper. The world was a strange place even before the COVID-19 pandemic, but it's gotten stranger still. 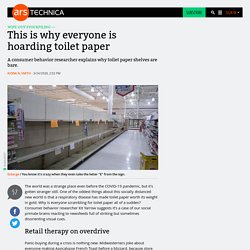 One of the oddest things about this socially distanced new world is that a respiratory disease has made toilet paper worth its weight in gold. Perché in Lombardia mancano le mascherine protettive? Fontana e Gallera non raccontano tutta la storia. Trump's most die-hard media supporters are proving that owning the libs is more important to them than the lives of their fellow Americans during the coronavirus pandemic.

Country Comparison - Hofstede Insights. Engadget is now a part of Verizon Media. Revealed: Facebook, Google's soft-money 'blackmail' to stall Euro fake news crackdown. Comment Facebook and Google used grants and other funding to academics and journalistic organizations to pressure a group of experts in Europe to water down proposals on fake news, it was claimed yesterday. 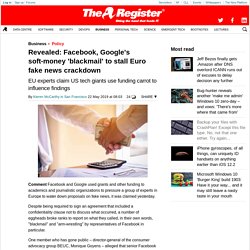 Despite being required to sign an agreement that included a confidentiality clause not to discuss what occurred, a number of eggheads broke ranks to report on what they called, in their own words, "blackmail" and "arm-wrestling" by representatives of Facebook in particular. One member who has gone public – director-general of the consumer advocacy group BEUC, Monique Goyens – alleged that senior Facebook staff threatened to create problems if the group of experts pursued an effort to investigate whether the US tech giant was abusing its market power. 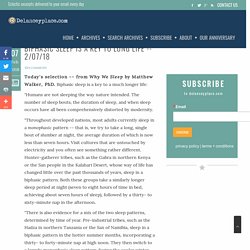 Biphasic sleep is a key to a much longer life: "Humans are not sleeping the way nature intended. The number of sleep bouts, the duration of sleep, and when sleep occurs have all been com­prehensively distorted by modernity. "Throughout developed nations, most adults currently sleep in a monophasic pattern -- that is, we try to take a long, single bout of slumber at night, the average duration of which is now less than seven hours. 15 Months of Fresh Hell Inside Facebook. 'We're all passengers in a billionaire hijacking' says the critic who has the world's richest people buzzing. The real lesson of Facebook's Apple dust-up shows why Zuckerberg's 'hacker way' is even more dangerous than we thought.

This Is Your Brain Off Facebook. Benvenuti a Ojmjakon. The internet is going to hell and its creators want your help fixing it. If ever there was doubt that 2018 is the year of fear, it was confirmed by a panel discussion involving the two men that are credited with inventing the internet and the world wide web. 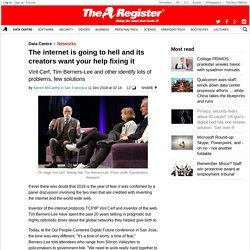 Inventor of the internet protocols TCP/IP Vint Cerf and inventor of the web Tim Berners-Lee have spent the past 20 years talking in pragmatic but highly optimistic tones about the global networks they helped give birth to. Today, at the Our People-Centered Digital Future conference in San Jose, the tone was very different. "It's a time of worry, a time of fear," Berners-Lee told attendees who range from Silicon Valleyites to policymakers to government folk.

"We need to work really hard together to fix it; we've got to get to where the internet is a net benefit to humanity. " The Brexit Fantasy Goes Down in Tears. For the past two and a half years, James O’Brien, a popular London talk-radio host, has been arguing that the “Leave” vote in the 2016 Brexit referendum was a tragic mistake. 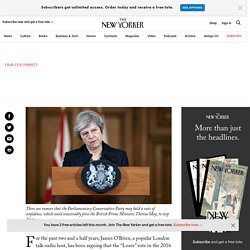 On Thursday morning, as the British Prime Minister, Theresa May, was preparing to defend in Parliament the controversial withdrawal deal her government has made with the European Union, O’Brien’s show received a call from a Leave voter named Bill, who said he owed the host an apology. “I was wrong, I was wrong, I was wrong, I was wrong,” the man began to say, in an accent that placed him firmly outside the British élite. “I’m an old-fashioned git, really, I suppose . . . For some reason, I thought we were better off, but, clearly, I was wrong.” As Bill made this admission, his voice broke and he started crying. At this stage, nobody knows for sure. It’s an almighty mess, and, as O’Brien pointed out to his distressed caller, it isn’t entirely the making of the ordinary Britons who voted Leave. Restaurante Japonés en Madrid Izakaya Hattori Hanzo 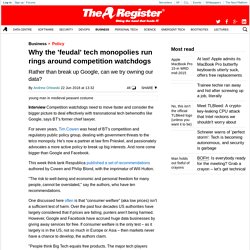 For seven years, Tim Cowen was head of BT's competition and regulatory public policy group, dealing with government threats to the telco monopoly. He's now a partner at law firm Prieskel, and passionately advocates a more active policy to break up big interests. And none come bigger than Google and Facebook. This week think tank Respublica published a set of recommendations authored by Cowen and Philip Blond, with the imprimatur of Will Hutton. "The risk to well-being and economic and personal freedom for many people, cannot be overstated," say the authors, who have ten recommendations. Il male di vivere - val kilmer ''bourdain sei stato un egoista, non hai pensato a tua figlia'' Cristiano Ogrisi per www.movieplayer.it. 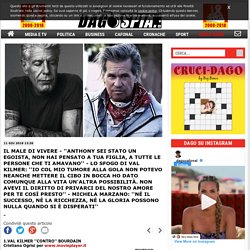 Perchè Young Signorino ha successo? Ecco perché va di moda essere ignoranti, il politologo tom nichols: tutta colpa degli anni settanta… A leaked look at Facebook’s search engine for influencer marketing. I asked Apple for all my data. Here's what was sent back. Last week, I asked Apple to give me all the data it's collected on me since I first became a customer in 2010 with the purchase of my first iPhone. 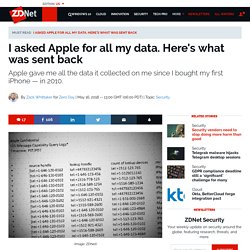 That was nearly a decade ago. As most tech companies have grown in size, they began collecting more and more data on users and customers -- even on non-users and non-customers. The recent Cambridge Analytica scandal revealed just how much tech companies have on us -- enough to figure out who we might vote for at the ballot box, for example. Commento di Michele Serra in merito alla... - L'Amaca di Michele Serra. Una vita dominata dal lavoro vale la pena di essere vissuta? Immaginatevi un mondo in cui il lavoro abbia preso il sopravvento su tutto. 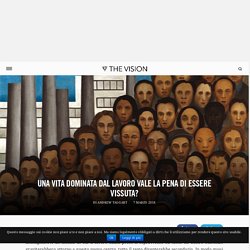 L’errore che ho commesso con la mia amica in lutto. The Internet has serious health problems, Mozilla Foundation report finds. Facebook plans crackdown on ad targeting by email without consent. TechCrunch. This is why our phones are making us miserable: happiness isn't the same thing as pleasure, and our brain knows it. Facebook’s Silence on the Cambridge Analytica Scandal. Some time, about 10 days ago, Facebook was notified that there were major stories planned in The Guardian, The New York Times, and on British television about Cambridge Analytica. These stories would allege that the company built its initial models of American voters with data ferried out of Facebook by an app built by a Cambridge psychology researcher.

And that when informed that this data existed, the company’s response was, at best, pro forma. The stories came out last Friday and Facebook’s shares have been in free fall since the markets opened this week. 8 signs you're in a strong relationship — even if it doesn't feel like it. Busting a move can be good for your relationship.Flickr / Vladimir Pustovit Here's the thing about relationships.

Sometimes they're candlelit date nights, walks through grassy meadows, and feeding each other cake at your wedding. But sometimes they're doing the dishes, comforting a screaming baby, and fighting over whose turn it is to do the dishes or comfort the screaming baby. Every 2 days we create. This eQuoo app games you to into learning useful psychological skills. Mental health is one of the biggest issues of recent times, with Kendall Jenner, Emma Stone, Lady Gaga and even The Rock opening up about their mental health issues.

Even the royal family has got in on the act, setting up the Heads Together charity. And it’s not just a fleeting issue. The World Health Organisation says depression will overtake cancer as the world’s main ‘global disease burden’ by 2030. So it’s not surprising that meditation apps like Calm are going gangbusters amongst consumers. However, meditation and brain training apps are targeted towards cognitive skills. So it’s interesting that a new app has launched to tackle the thornier problem of how to improve your emotional intelligence. eQuoo is an emotional fitness game that aims to teach you psychological skills in a fun and engaging way. This is what your smartphone is doing to your brain — and it isn't good. Meditation is taking over Wall Street and Silicon Valley — here's how to start a daily habit.

Hawking suffers from ALS (Amyotrophic Lateral Sclerosis or Lou Gehrigs disease), which has rendered him quadriplegic, and is able to speak only via a computerized voice synthesizer which is operated by batting his eyelids. David Silverman/Getty Images Artificial intelligence and increasing automation is going to decimate middle class jobs, worsening inequality and risking significant political upheaval, Stephen Hawking has warned. In a column in The Guardian, the world-famous physicist wrote that "the automation of factories has already decimated jobs in traditional manufacturing, and the rise of artificial intelligence is likely to extend this job destruction deep into the middle classes, with only the most caring, creative or supervisory roles remaining.

Business Is Bad? Blame the Millennials. Tesla Motors Inc. will likely charge owners of its forthcoming Model 3 sedan to use the company’s network of Supercharging stations, which is free to owners of current models, Chief Executive Officer Elon Musk said Tuesday. “Free Supercharging fundamentally has a cost,” Musk, 44, said Tuesday during Tesla’s annual shareholders meeting, held at the Computer History Museum in Mountain View, California. “The obvious thing to do is decouple that from the cost of the Model 3. So it will still be very cheap, and far cheaper than gasoline, to drive long-distance with the Model 3, but it will not be free long distance for life unless you purchase that package.” Musk did not provide further details as to what the package may cost consumers. Parar el reloj y vivir intensamente. Sicuri che i vostri amici siano davvero amici vostri? - Oliver Burkeman. El gráfico que muestra que en España tenemos horarios muy raros.

LUMA's State of Digital Media at DMS 16. The Man Who May One-Up Darwin. Science reveals what it may say about your personality if you're still friends with your ex. This chart shows the age when most people feel the least happy. L’arte del kintsugi insegna l’importanza della fragilità. Ding is more important than Shakespeare, says VC living in self-contained universe.