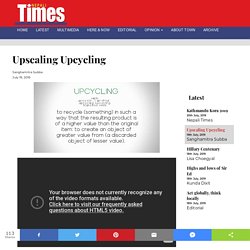 While some of them are recycled, many cannot be rebottled in Nepal and end up as shards of glass on the banks of rivers and around landfill sites. Doko Recyclers has been collecting garbage house-to-house in Kathmandu to covert organic waste into fertiliser and recycle other material. Now, it has launched a new brand for upcycled products called Tatwa, which takes unrecyclable imported beer, wine and liquor bottles and converts them into candle holders, drinking glasses, tumblers, glass containers and even toothpick holders. (5) Nepal Earthquake: How Facebook is Catalyzing Grassroots Mobilization. Nepal’s Aid System Is Broken. So These Lifesavers Hacked It. Landline to online. Africa marked the end of World War I two weeks after Europe because it took that long to get out the message that the war had ended. 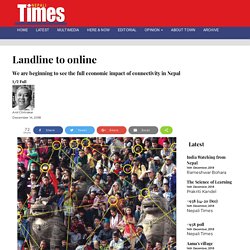 Months after the end of World War II, Gurkha soldiers were still in the jungles of Burma looking out for Japanese troops, unaware that a peace agreement had been signed. When British officers asked them how they found their way back, one of them produced a road map of London. Today, they would use Google Maps. In a recent episode of James Corden’s The Late Late Show, the CBS late night talk show had to make a real effort to explain to younger members in the audience what a ‘letter’, ‘envelope’, ‘postage stamps’ and ‘mail boxes’ were. Indian Prime Minister Narendra Modi elaborated on his connectivity strategy in an address to Nepal’s Parliament on his first visit to Nepal in 2014 with the acronym ‘HIT’ standing for highways, information and transmission lines. Nepal moves from aid to enterprise. As human beings, we are creatures who measure. 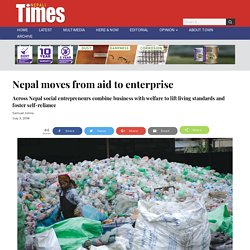 We count. Nepali Times Buzz. Milijuli Nepali has been sharing stories of hope and survival from villages affected by the 2015 earthquake Pics: BBC Media Action After his village was devastated by the earthquake two years ago, killing 15 of his neighbours, Bir Bahadur Tamang needed an engineer who could tell him about seismic-resistant designs. 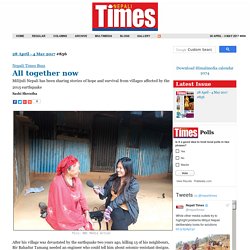 But like many other families in earthquake-affected districts, Tamang, the former chair of Satyadevi village of Dhading district, had never met an engineer. Still, he got all the information he needed on building safer homes using salvaged material from Milijuli Nepali, a radio program syndicated through local FM radio stations. The State of FinTech in Nepal. Nepal is a landlocked country with China to the North and India to the South, East, and West. 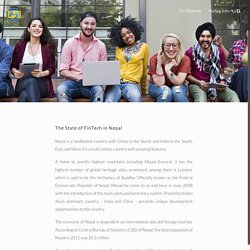 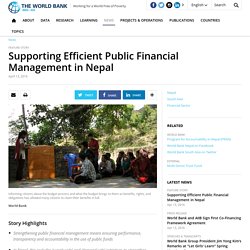 He had no knowledge that he was even entitled to this payment until a civil society organization came to his village and raised awareness about these rightful entitlements. In another district, Palpa, it used to take weeks for government school teachers to receive their salary. Now, teachers receive their salary on the same day that the District Treasury Comptroller Office (DTCO) issues their cheques, due to the introduction of the Treasury Single Account (TSA). Meanwhile, for communities in Baglung, the municipal budget no longer signifies lengthy, confusing and arbitrary numbers. Learning from 25 April. 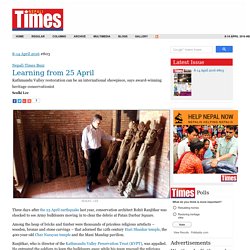 Among the heap of bricks and timber were thousands of priceless religious artefacts – wooden, bronze and stone carvings – that adorned the 12th century Hari Shankar temple, the 400-year-old Char Narayan temple and the Mani Mandap pavilion. Ranjitkar, who is director of the Kathmandu Valley Preservation Trust (KVPT), was appalled. He entreated the soldiers to keep the bulldozers away while his team rescued the religious objects from the Malla-era temples. The Army relented and Ranjitkar and his colleagues mobilised the local community and volunteers for nine days, digging out and carrying the fallen items from the ruins into the courtyard of Patan Museum for safe-keeping. Nepali Times Buzz. Nepalis who return home after garnering international exposure bring with them new skills and ideas. 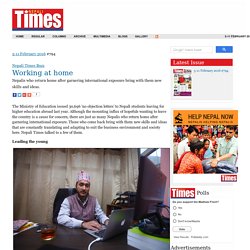 The Ministry of Education issued 30,696 ‘no objection letters’ to Nepali students leaving for higher education abroad last year. This Sherpa Woman Is the New Face of Adventure. At National Geographic, our definition of adventure is a broad one, spanning exploration and conservation, the pushing of the boundaries of human potential, cultural boundary breaking, community building, and humanitarianism. 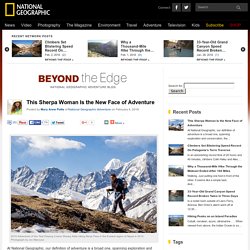 Our 2016 Adventurer of the Year honorees reflect this diversity, from Dawn Wall climbers Tommy Caldwell and Kevin Jorgeson to Okavango wilderness protector and wildlife biologist Steve Boyes to the brave women of the Afghan Women’s Cycling Team. But there can only be one People’s Choice, chosen by weeks of voting and support from all of you. Nepali Times Buzz. As a freezing winter set in and the government had still not provided relief to survivors of last April’s earthquake, Abiral Karki and his colleagues decided to take matters into their own hands by collecting clothes and buying blankets for the victims. 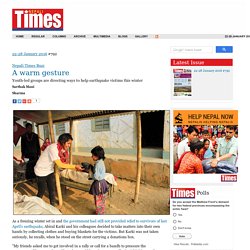 But Karki was not taken seriously, he recalls, when he stood on the street carrying a donations box. "My friends asked me to get involved in a rally or call for a bandh to pressure the government,” he remembers. “But what would have been more effective? Waiting on the government to take action or doing something yourself?” Alternative post quake housing. More than 600,000 buildings were destroyed during the earthquake of April, 2015. Nine months later the biggest challenge is still to rebuild the houses. As survivors brave the winter and snow, many worry they will end up with the same unsafe houses rebuilt from salvaged material that will once again put their lives at risk. Power to the people. “Seeing that a normal person like me could do something like that, the spirit of entrepreneurship emerged.” Dec 31, 2015- Bir Bahadur Ghale had a simple dream: to light up his village in Gorkha.

As he started envisioning an electricity-empowered society, he took the idea and spread it all across Nepal. Today his company, Hydro Energy Concern Pvt. Ltd., helps light up villages in 18 districts. The beginningI am a village kid from Barpak and had no aspirations until I moved to Kathmandu in grade eight. Miraculous saves. Documenting tragedies whether natural or manmade is difficult for a filmmaker. How do you tread that fine line between being inquisitive but not intrusive, especially at a time when the wounds are still raw for survivors. Bhagyale Bachekaharu (Nepal Earthquake: Heroes, Survivors and Miracles) which last week won the Best Documentary Award at this year’s Kathmandu International Mountain Film Festival is an example of how to treat such subject matter with sensitivity and empathy and walk that fine line. The film directed by journalist Ganesh Panday is not only an important documentation of the April earthquake that devastated central Nepal, but also a testimonial to the value of ethical reporting in the media.

Using footage and photographs taken during the first few days after the disaster, and combining them with interviews conducted later with victims, their families and rescue workers, Panday has made a film that humanises the tragedy without being voyeuristic. In 5 Minutes, He Lets the Blind See. This video is not currently supported on your browser. Advertisement Continue reading the main story Video. Rise of the Facebook crusader:  After the devastating earthquake in April, a new generation of aid workers emerged in Nepal – young people using social media to help save lives and rebuild the country. By Sue Carpenter Published: 23:06 GMT, 15 August 2015 | Updated: 04:39 GMT, 17 August 2015 When the devastating earthquake struck in Nepal on 25 April, I turned to Facebook to see what news I could glean from friends who live there.

Thankfully, they were all safe. For me, it felt very close to home. "Like Roaring Earth" Rise of the Facebook crusader:  After the devastating earthquake in April, a new generation of aid workers emerged in Nepal – young people using social media to help save lives and rebuild the country. 6 Stories Of Resilience From Around The World That Will Warm Your Heart. Nepal: 100 Days Since the Earthquake (Part 1) Power of young people: Maximizing their contributions. Laughing it off. Quake victims waiting to be discharged from Trauma Centre. Nepal: Three months on, volunteers show no sign of weariness. Nepal earthquakes: What I saved from the rubble - BBC News. If you could save just one object from an earthquake, what would you choose? The quiet warrior. Nepal’s quiet green revolution. Mechanised farming and cooperatives are increasing productivity, empowering women and creating jobs. The Ultimate Do-It-Yourself Challenge: Life After An Earthquake : Goats and Soda.

Murals of hope. Volunteer Camp for Post-earthquake Recovery. The baby who lived. Moving out of darkness together. Stories of Nepal. Life in post-quake situation after a brush with death. 50 quintals of organic seeds sent to Nepal. Shaking Up the Status Quo in Nepal. Supporting Relief in Gorkha, By Dr Parun Sekhri - PHASE Worldwide. When disaster struck: Nepalese volunteers in aid action. After the Earthquake, Nepal Braces for Monsoons. Those Twilight Zones. Finding salvation in the stories of Nepal&apos;s survivors. 12 interesting ways you can help Nepal (post Earthquake). The traditions that the earthquake couldn’t shake. Ruby Valley; a call for your help. Nepal earthquake: why I had to return to a devastated country in crisis. Welcome to Forbes. IMPORTANT: Giving to the living. Preparing to be prepared. Bright lights on a dark day.

Guest Commentary: Taking the long view on recovery in Nepal. Nepal earthquake: Resilience on top of a mountain. NASA's Radar Found 4 Men Trapped in Rubble in Nepal By Their Heartbeats. Nepal earthquake: Britain gives shelter to 65,000 displaced people - BBC News. Use Data, Not Nepotism, to Deliver Aid in Nepal. Nepal’s Mountain Bikers Are Getting Aid to Isolated Quake-Hit Villages. After a Massive Earthquake, Rebuilding it Right in Nepal. Nepal’s Only Billionaire Begins His Own Earthquake Aid Program - India Real Time.