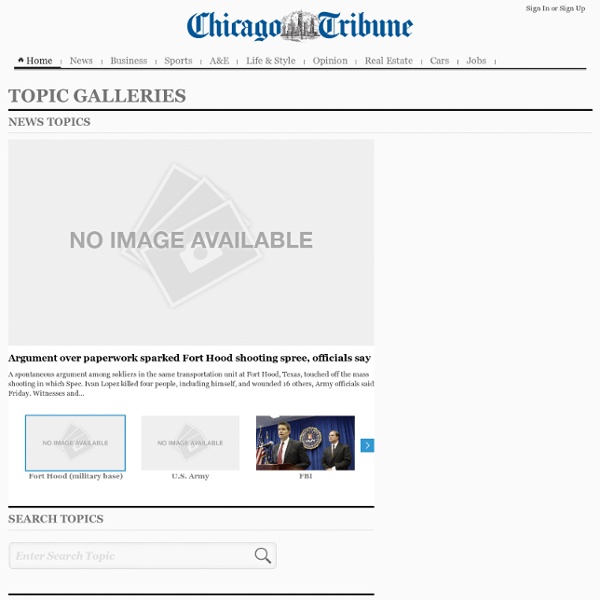 Preserving Cabrini-Green's images In the sharp sun of an April afternoon, Nate Lanthrum walks through the remains of Cabrini-Green giving away what he has taken. He looks out of place, a white guy carrying a $1,500 Nikon D700 camera, but the residents are used to him by now and greet... Blackhawks thrilled to have Brent Seabrook back Starting with Game 6 Sunday, Brent Seabrook's timeout will be over and the defenseman will be back on the ice — so long as he promises to play nice. The Blackhawks have done pretty well in Seabrook's absence, winning all three games the NHL... NFL draft preview: Defensive ends As the NFL draft nears — it takes place May 8-10 — we're taking an 11-day, position-by-position look at what's out there and what the Bears need. In May 1974, Tribune delivered 2 Watergate bombshells Obama denounces racist comments reportedly made by NBA owner Cubs can't take advantage of Brewers' injuries Northwestern women win at Wrigley Blackhawks thrilled to have Brent Seabrook back

First glimpse inside Fukushima reactor A radiation-distorted image from inside damaged reactor No. 2. Photo: AP Radiation-blurred images taken inside one of Japan's tsunami-hit nuclear reactors show steam, unidentified parts and rusty metal surfaces scarred by 10 months of exposure to heat and humidity. The photos - the first inside-look since the disaster - showed none of the reactor's melted fuel or its cooling water but confirmed stable temperatures and showed no major ruptures caused by the earthquake last March, said Junichi Matsumoto, spokesman for plant operator Tokyo Electric Power Company. Pipes and grates in the reactor's containment vessel were seen in some images. Other photos were dark and blurry.

What Pushed Anders Behring Breivik Over the Edge? Watching the international media on the web and TV change gears Friday, as information started to fasten to the fact that the worst terrorist act in Scandinavia since the 3rd Reich was perpetrated by a right-wing Christian zealot, was fascinating. This, rather than what Pam Geller , Steve Emerson, Daniel Pipes, Dennis Prager, David Horowitz, CNN , Fox News and many others were touting for hours as most likely an act of Muslim Jihad in a country that is way, way too liberal. I was keyed into paying attention to how this meme might have to morph fairly early in the afternoon, by an item carried by Michael Rivero at What Really Happened , about the major event at the youth camp the day before the massacre:

Addressing Big Development Challenges with Financial Innovation At CGAP, we believe that financial innovation has great potential to help solve big development challenges in access to energy, water, education, health and agriculture. We’re calling this concept Digital Finance Plus. There is increasing evidence from Kenya, Tanzania, Pakistan, Bangladesh and elsewhere that shows that even a basic mobile wallet that allows people to save and transact brings benefits. But the story clearly is far from over. We all need this financial innovation to work harder and go further in order to really make an impact on people’s lives. 404 Project CGI: Richard/Trigg Case: CORRUPTION UNLIMITED We need help raising awareness on this case. Corruption Unlimited. The Kelly Marie Richard Case

The Rise and Fall of Bitcoin In November 1, 2008, a man named Satoshi Nakamoto posted a research paper to an obscure cryptography listserv describing his design for a new digital currency that he called bitcoin. None of the list’s veterans had heard of him, and what little information could be gleaned was murky and contradictory. In an online profile, he said he lived in Japan.

The news coverage of the Norway mass-killings was fact-free conjecture I went to bed in a terrible world and awoke inside a worse one. At the time of writing, details of the Norwegian atrocity are still emerging, although the identity of the perpetrator has now been confirmed and his motivation seems increasingly clear: a far-right anti-Muslim extremist who despised the ruling party. Presumably he wanted to make a name for himself, which is why I won't identify him. His name deserves to be forgotten. Discarded. Deleted.

Parents Insist Vaccines Killed Their Sick and Fragile Toddler Photo taken at protest outside Ministry of Health An extremely sick toddler died in Renaix, Belgium last week after receiving his MMR vaccination from the ‘Kind en Gezin’ Child and Family Health Centre. The toddler, the second to die in Belgium in less than six months, suffered a cardiac arrest after receiving the MMR vaccination given to him by a G.P. despite warnings from his father that he was still unwell. Xandro just 18 months was recovering from RSV (Respiratory Syncytial Virus) a respiratory infection involving his lungs and breathing passages (1) and his father was worried that he was not well enough to receive the vaccine. Cedric Sanspuer, Xandro’s father, told reporters that his son had remained a sick and fragile child since his illness and that he had asked the G.P. to give him a thorough examination before giving him the vaccine. According to Mr.

Protecting Soil Fertility: Protecting Life There is much discussion in the development arena about the struggle ahead to feed the seven plus billion, of the methods proposed towards food security, building resilience, safeguarding water resources and so on. But few stop to ponder the basic ingredient in all of this: the very land under our feet, and the starting point of all agricultural productivity. At the European Development Days, EuropeAid hosted a Lab session dedicated to the relevance of soils in development policy, featuring the release earlier this year of the first Soil Atlas of Africa. In many places, it can take up to 2000 years to create a mere 10 centimetres of fertile soil, which can be washed or blown away in a matter of hours in a severe storm, or depleted in a few years of poorly managed land and water use.

CGI in Canada & USA: How Far-Reaching is CGI? CGI Announces that David Johnston Will Resign from Its Board of Directors July 23 2010. HighBeam David Johnston to leave CGI for governor general post July 15 2010. CBC

These claims question the legitamency of the second hand source of information have recieved from a website. It would not be too hard to fake the government shut-down for political reasons. They lend themselves to a commonn sense based analysis, (how could an organzation as advanced and powerful be dumb enough to shut itself down?) What reason would they have to shut down their government. by tstjohn Oct 8