Toronto startup brings electricity and solar water purification to Nepal. When two concurrent earthquakes ripped through Nepal in April, Jason Gray felt the aftershocks back in Toronto. The co-founder of SunFarmer, a Toronto startup that offers long-term financing for solar energy systems in underserved regions, has spent the past two years setting up projects around the country and understood what a natural disaster of this scale meant for the people on the ground. "Unfortunately Nepal has a history of being a difficult place to do business and a difficult government to deal with, [so] it's been difficult for many of the relief agencies to work with them and get relief aid into the country," Mr.

Gray says. Story continues below advertisement He also had to make sure his team in Nepal was accounted for, a challenge when cellphone access, dependent on an energy grid that is limited in the best of times, had been completely destabilized. Thankfully, everyone was fine. These relief efforts are often the difference between a natural disaster and a national calamity. Around 50,000 quake-affected families to be removed from government list of beneficiaries. Around 50,000 earthquake-affected families will no longer be eligible to receive the government grant to build new homes after they failed to sign agreements with the National Reconstruction Authority within deadline. 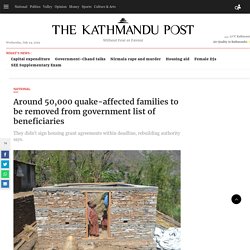 Rebuilding Nepal, Four Years After the Quake. Three-quarters of destroyed homes are either fully rebuilt or being repaired after Nepal’s devastating 2015 earthquake. 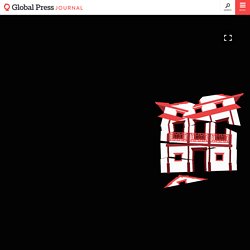 But gaps in government assistance show that a full recovery may never materialize. The ground has settled since a 7.8-magnitude earthquake killed nearly 9,000 people in 2015, but life for many people in Nepal remains precarious. The Record - A Ghost Settlement in Gorkha. In Gupsi Pakha in Gorkha district, about 2,750m above sea level, there are 573 identical, evenly spaced, two storeyed brick buildings. 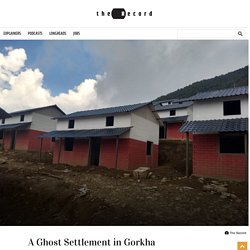 They are painted red and white, with blue tin roofs, and each building has three small windows and a door. From afar, the buildings look complete. Inside, they are decrepit. The unplastered walls contain a sprawl of construction materials and debris, the buildings mere skeletons of what should be ordered space, two rooms and an attic.

The settlement looks eerie, makeshift. The women desperate to leave Nepal. Image copyright Getty Images The trafficking of Nepali women increased rapidly after the 2015 earthquake, and social media has been making the traffickers' job even easier, discovers Vicky Spratt. 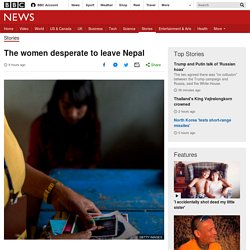 The sound of laughter and singing echoes around the building, mixing with the beeping horns of the traffic outside. The walls are draped with vibrant orange, turquoise and pink silk scarves all made as a form of therapy by the survivors who live here. This is a safe house in Kathmandu for women who were trafficked into prostitution and are now being supported as they try to return to their normal lives. Four years after Nepal’s deadly earthquakes, survivors continue to live in disarray. Apr 24, 2019- By the time Maite Pasang Sherpa reached his house after the earthquake struck, it was already too late. 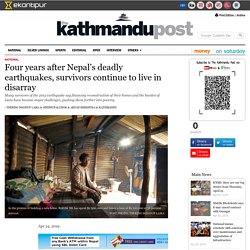 He stood in front of his home, now collapsed to the ground. In front was the lifeless body of his eldest daughter, just nine years old. Inside the rubble of his home were two more bodies: his youngest daughter, who was five, and his aunt. Maite lost consciousness. It has been four years since the deadly earthquakes ripped apart Listikot Ward 1, where Maite and his wife Pema have been living all their lives. After living in a temporary shelter for three years, Maite and Pema finally began building a new house last year. “My family has already spent four years in a temporary shelter. Deconstructing reconstruction. The Department of Archeology is responsible for most of these violations of heritage conservation norms. 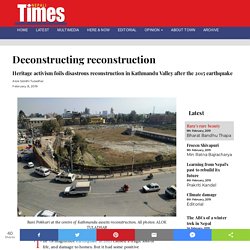 The public and activists had to directly intervene to stop the inappropriate rebuilding of Rani Pokhari under the supervision of Kathmandu Metropolitan City, while the Department of Archeology watched in silent complicity. Using tarpaulin sheets to hide the reconstruction from public view, the City started building cement retaining walls around the 17th century pond that holds great religious, cultural and architectural significance.

Not only was the use of concrete illegal as per the Ancient Monuments Preservation Act, the City planned to turn the site into a commercial park. Learning from Nepal’s past to rebuild its future. Despite new tools and automation, Nepal’s artisans have gone back to traditional methods to rebuild monuments destroyed and damaged in the 2015 earthquake. 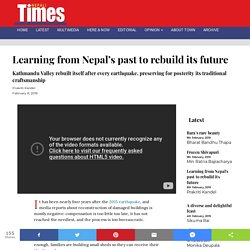 In the Chwechhen neighbourhood of Patan, detailed carvings adorn almost every piece of architecture. A crumbling old temple in the square has now been lovingly and painstakingly restored to its former glory, using old techniques, raw materials and tools. Dharma Dutta Bajracharya (pictured, above) is one of the woodcarvers, and has been chiselling figures of deities into wood since he started as an apprentice to learn the craft from his father at age 13. Woodcarvers like Bajracharya lost much of their business when the earthquake and Indian Blockade reduced tourist traffic to a trickle. 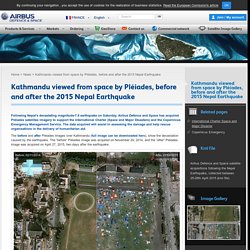 The data acquired will assist in assessing the damage and help rescue organisations in the delivery of humanitarian aid. The before and after Pléiades images over Kathmandu (full image can be downloaded here), show the devastation caused by the earthquake. The “before” Pléiades image was acquired on November 29, 2014, and the “after” Pléiades image was acquired on April 27, 2015, two days after the earthquake. Before, 02/11/2014 After, 27/04/2015 Want to insert this comparison on your website ? Post-quake development in epicentre of April 25 temblor. Locals of Barpak village rebuilding their own houses as no government help was forthcoming. 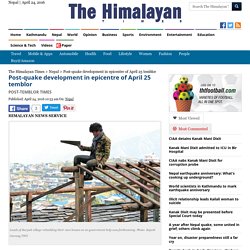 Photo: Rajesh Gurung/THT Business Nepse surges by 2.55pc Increased attraction to the stocks of commercial b... Opinion Life lessons from earthquake No matter how much we criticise the government and... Science & Technology Nepal earthquake anniversary: What’s cooking up underground? There were no foreshocks or any other significant ... ‘30,000 plus tremors in 365 days’ Photo: THT World Seychelles says helping worldwide probe into Malaysia’s 1MDB fund The Seychelles is helping an international investi... 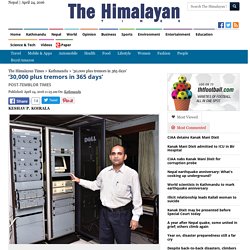 Art & Culture Shakespeare more popular abroad than in Britain On the 400th anniversary of his death, Shakespeare... Opinion Life lessons from earthquake No matter how much we criticise the government and... Entertainment Beyonce releases surprise album ‘Lemonade’ as much-anticipated TV special airs Beyonce cemented her status as the queen of surpri... Automobile German automakers to recall 630,000 cars German news agency dpa is reporting that several o... Quake-induced geohazards. Nepal Three schools running classes at one temporary learning centre Ever since the April Earthquake flattened school b...

Sports Anfield stunned as old friend Benitez conjures comeback The Kop never forget their own and Rafa Benitez re... Business Nepse surges by 2.55pc Increased attraction to the stocks of commercial b... : The April 25 earthquake and its powerful May 12 aftershock not only damaged the man-made structures and buildings but also induced geohazards including landslides and avalanches in the affected region. The Gorkha earthquake sequence affected sources of water and blocked streams and rivers at many places. Several valley-blocking landslides were reported from Myagdi to Dolakha.

Scientists pinpoint unbroken section of Nepal fault line and show why Himalayas grow. Stirred, not shaken. On National Earthquake Safety Day, it is worth remembering that 25 April 2015 was not the Big One everyone had feared. First aftershock of new year, epicentre in Sindhupalchok. Magnitude-5.5 fresh earthquake shakes west Nepal. Nepal Avalanche Carried Half the Force of an Atomic Bomb. NEW DELHI — The avalanche that buried the popular hiking village of Langtang in Nepal this past spring struck with about half the force of an atomic bomb, according to a study published this week in the journal Science. A strong earthquake on April 25 touched off the avalanche, sending stone, earth and snow cascading down onto the village, which was crowded with backpackers, guides and their families.

About 350 people were killed, many of them foreign tourists. Government to hand over Rs 200K to half a million families. Reconstruction Bill passed unopposed. Bordering on helplessness. Bigger Earthquakes May Be Coming to Nepal. Nepal earthquake led to fewer landslides. NEW YORK: The deadly Nepal earthquake of April this year which killed thousands led to fewer than expected landslides, says a team of international scientists. 5.3 ML quake shakes Kathmandu Valley. Why was the Nepali earthquake so devastating? Because of its government’s political failings. Light aftershock recorded after 14 days, epicentre in Rasuwa - The Himalayan Times. Claire Burkert: Looking at "Himalayan style" following the earthquake in Nepal. The heart of the matter, part 3.

Nepal schools after the quakes