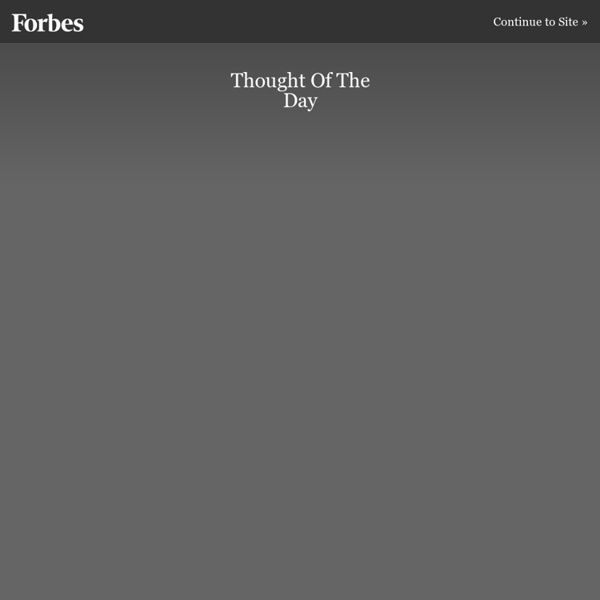 3 Leadership Lessons We Can Learn from Gen Y A third of U.S. employees feel chronically overworked. 52% of U.S. families say work interferes with their family or home responsibilities. More than 54% of U.S. Americans say they will look for a better job once the economy improves. I could prattle on with statistics like the above.

“Minority Report” Scanners Are Coming: Company Receives $15 Million to Develop Long-Range Facial Recognition Technology They might not light up our eyes, but long-range facial recognition cameras are sure to light up computer databases with our whereabouts, criminal records, possibly even our shopping tendencies. Ever heard of a company called Digital Signal Corporation? Neither had I. Well, remember the movie “Minority Report,” how cameras everywhere would scan Tom Cruise, instantly recognizing him to either welcome him into the shopping mall or send the cops after him? The same sort of facial recognition technology is exactly what Digital Signal Corporation is into–except these guys are for real. Why Do People Persist in Believing Things That Just Aren't True? Last month, Brendan Nyhan, a professor of political science at Dartmouth, published the results of a study that he and a team of pediatricians and political scientists had been working on for three years. They had followed a group of almost two thousand parents, all of whom had at least one child under the age of seventeen, to test a simple relationship: Could various pro-vaccination campaigns change parental attitudes toward vaccines? Each household received one of four messages: a leaflet from the Centers for Disease Control and Prevention stating that there had been no evidence linking the measles, mumps, and rubella (M.M.R.) vaccine and autism; a leaflet from the Vaccine Information Statement on the dangers of the diseases that the M.M.R. vaccine prevents; photographs of children who had suffered from the diseases; and a dramatic story from a Centers for Disease Control and Prevention about an infant who almost died of measles. The result was dramatic: a whole lot of nothing.

What is a Hacker? Copyright © 2001 Eric S. Raymond As editor of the Jargon File and author of a few other well-known documents of similar nature, I often get email requests from enthusiastic network newbies asking (in effect) "how can I learn to be a wizardly hacker?". Back in 1996 I noticed that there didn't seem to be any other FAQs or web documents that addressed this vital question, so I started this one. A lot of hackers now consider it definitive, and I suppose that means it is. Still, I don't claim to be the exclusive authority on this topic; if you don't like what you read here, write your own.

The Ultimate Do-It-Yourself Challenge: Life After An Earthquake : Goats and Soda Video by Rajneesh Bhandari and Pierre Kattar for NPR Their houses are in ruins. They are trying to salvage what they can to start rebuilding. And they're doing it alone. Top 10 Generation Y Trends for 2012 Is the recession a reset button or a stop-consuming-now moment for Generation Y? What is the influence of Andy Warhol’s famous quote “In the future, everyone will be world-famous for 15 minutes,” in 2012? Why is baking cake important for millennials? Why are we all becoming Technoholics in the near future? In this Top 10 Generation Y Trends for 2012 article, I discuss 10 trends for 2012, concerning generarion Y. Find them below:

ehci - Project Hosting on Google Code ehci can also be used as an open source head tracking library IdeAs - Please Contribute 07/20/10 - New release 0.7. Bug fixes. In development environment the program hasn't crashed so far. Corrections in RANSAC iteration have been done. 10 Global Values That Are Old and Stale, and How to Replace Them  Two hundred and thirty remarkable people from North and South gathered in Reykjavik from April 9-12 to share actions for effective change on the issue of "the power of love and compassion in governance." Why Iceland? Consistently rated the most peaceable of all countries in the world by the Global Peace Index, Iceland has reduced its military expenditure to zero, has no armed forces, and has reduced the inequality gap between rich and poor. That's a good start.

Life Lessons From Benjamin Franklin Benjamin Franklin was a man of action. Over his lifetime, his curiosity and passion fueled a diverse range of interests. He was a writer (often using a pseudonym), publisher, diplomat, inventor and one of the Founding Fathers of the United States. Nepal’s quiet green revolution Mechanised farming and cooperatives are increasing productivity, empowering women and creating jobs Best job in the world: Sabita Chaudhary, 25, drives a transplanter seeding a rice field in Morang on Tuesday. Twenty-five farmers would have spent two days to transplant rice in this 1.5 hectare field that she finished in just one hour. Sweat trickling down her face, brow furrowed in concentration, Sabita Chaudhary steers her power transplanter with precision, seeding paddy in neat rows on a flooded field. The seedlings are stacked in trays at the back of the machine which plants them over 1.5 hectare land in one hour, a job that would have earlier taken 25 people two days to do. Even as Nepal’s annual rice production keeps dropping due to the shortage of farmland, fragmentation of holdings, labour shortage and falling productivity due to government neglect, here in the plains of eastern Nepal there is a quiet green revolution happening.

Millennials: Confident. Connected. Open to Change. - Pew Social & Demographic Trends Executive Summary Generations, like people, have personalities, and Millennials — the American teens and twenty-somethings who are making the passage into adulthood at the start of a new millennium — have begun to forge theirs: confident, self-expressive, liberal, upbeat and open to change. They are more ethnically and racially diverse than older adults. They’re less religious, less likely to have served in the military, and are on track to become the most educated generation in American history. Their entry into careers and first jobs has been badly set back by the Great Recession, but they are more upbeat than their elders about their own economic futures as well as about the overall state of the nation.

Seeing Machines Track and understand faces like never before with faceAPI from Seeing Machines – now available for license. faceAPI allows you to incorporate Seeing Machines world class face tracking technology into your own product or application. faceAPI provides a suite of image-processing modules created specifically for tracking and understanding faces and facial features. These powerful tracking modules are combined into a complete API toolkit that delivers a rich stream of information that you can incorporate into your own products or services. Seeing Machines faceAPI is the only comprehensive, integrated solution for developing products that leverage real-time face tracking.

It is so different in France... Dress code is important but you need to be good too ! Having the "right" dress code means (for me) I know where I am and I know why I am here today... by librio69 Mar 8

Interviewing is more art than science. To be effective, interviewers feel a need to come up with a killer question. To fulfill their task, they need to do their best to understand who you are. They are particularly interested in what unsettles you, as that reveals your character. Enrol someone to ask you a wide range of questions before you interview. The practice will make you feel more confident going in so that, when you get asked a question that you haven't prepared for, you will be more comfortable by rohanlight Mar 8

Thes tips might be a litle off or weird. They definetly are not normal but they just might help you land a job. by kyrstin1995 Mar 7

this tells you that you need to be prepared when you walk in a interview. and its better to know what you are doing and look smart by kingj Mar 7

This is a good article, it says you should always be prepared with questions to ask. Its always better to be over prepared than under. by emanietta Mar 7

I'd like to but I think I've got some reading to do first. I'll come knocking later on! by spark Apr 5

you're welcome - onlyI had to add a sub pearl as I put too many content on the main one....such a loooooong story, and still ongoing If you wanna join, feel free by laetsgo Apr 5

:-) // Agree. Whizzkid daughter and a proud dad who finds it all quite 'amusing'... (I bet not). // Cool Acta pearl you guys got together! Thanks! Just what I was looking for. by spark Apr 3

arf ! didn't mean it against you ! I wrote the comment on my own pearltree relative to the subject of #anonymous. And this story seems so far fetched to me... by laetsgo Mar 26