Studying the Effects of Playing Violent Video Games. The Making of the Fox News White House. Bill Gates says poverty is decreasing. He couldn’t be more wrong. Last week, as world leaders and business elites arrived in Davos for the World Economic Forum, Bill Gates tweeted an infographic to his 46 million followers showing that the world has been getting better and better. 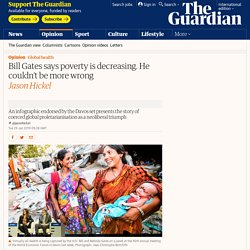 “This is one of my favourite infographics,” he wrote. Psychology's Replication Crisis Is Real, Many Labs 2 Says. Read: Online bettors can sniff out weak psychology studies. 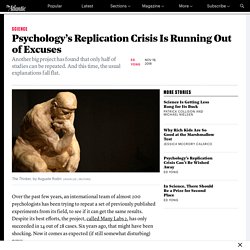 But other intuitions were less accurate. In 12 cases, the scientists behind the original studies suggested traits that the replicators should account for. Why Econ Classes Barely Mention Behavioral Economics. Read: Richard Thaler wins the Nobel in Economics for killing Homo economicus. 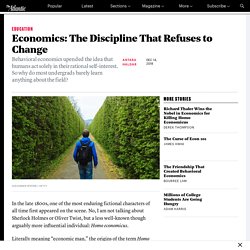 But despite the fanfare, Homo economicus remains a stubbornly persistent part of the economics curriculum. While it is fashionable for most economics departments to have courses on behavioral economics, the core requirements in economics at many colleges are usually limited to only two substantive courses—one in microeconomics, which looks at how individuals optimize economic decisions, and another in macroeconomics, which focuses on national or regional markets as a whole. Life's Headwinds and Tailwinds. Forecasting Instability: The Case of the Arab Spring and the Limitations of Socioeconomic Data.

Log In - New York Times. There’s no significant connection between your personality as a teenager and a septuagenarian — Quartz. Why Facts Don’t Change Our Minds. The Point Of Trump's Biased Media Survey Isn't To Survey People. President Trump speaks during a news conference at the White House on Thursday. 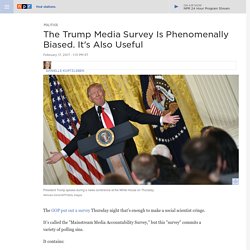 Nicholas Kamm/AFP/Getty Images hide caption toggle caption Nicholas Kamm/AFP/Getty Images President Trump speaks during a news conference at the White House on Thursday. This is what Trump voters said when asked to compare his inauguration crowd with Obama’s. This pair of photos shows a view of the crowd on the National Mall at the inaugurations of President Barack Obama, above, on Jan. 20, 2009, and President Donald Trump, below, on Jan. 20, 2017. 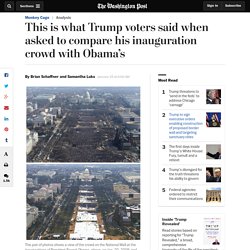 The photo above and the screengrab from video below were both shot shortly before noon from the top of the Washington Monument. (AP Photo) Fascinating Observations of Life in the West by an Iraqi Anthropologist. Until now there have been very few authoritative anthropological studies about the Western World, of which we know very little aside from inaccurate media representations and what we see in TV and film which can be hardly representative of the reality of Western culture. 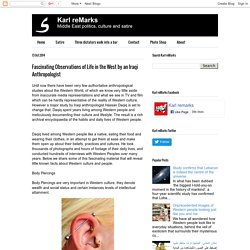 However a major study by Iraqi anthropologist Hassan Daqiq is set to change that. Daqiq spent years living among Western people and meticulously documenting their culture and lifestyle. The result is a rich archival encyclopaedia of the habits and daily lives of Western people. Daqiq lived among Western people like a native, eating their food and wearing their clothes, in an attempt to get them at ease and make them open up about their beliefs, practices and cultures. He took thousands of photographs and hours of footage of their daily lives, and conducted hundreds of interviews with Western Peoples over many years. Body Piercings Body piercings are also important in establishing gender roles in Western culture. Internet searches create illusion of personal knowledge, research finds. Searching the Internet for information may make people feel smarter than they actually are, according to new research published by the American Psychological Association. 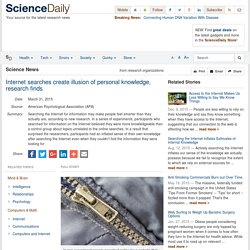 A new theory for why Trump voters are so angry — that actually makes sense. The Post's Dan Balz explores some of the factors behind President-elect Donald Trump's victory against his Democratic opponent, Hillary Clinton. 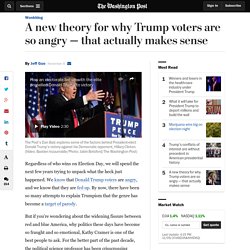 Students hear a lecture at the Johann Wolfang Goethe-University on Oct. 13, 2014, in Frankfurt am Main, Germany. Thomas Lohnes/Getty Images hide caption toggle caption Thomas Lohnes/Getty Images. Theory of Knowledge. Replication studies: Bad copy. For many psychologists, the clearest sign that their field was in trouble came, ironically, from a study about premonition. 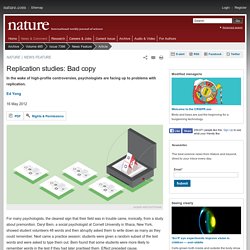 Daryl Bem, a social psychologist at Cornell University in Ithaca, New York, showed student volunteers 48 words and then abruptly asked them to write down as many as they could remember. Next came a practice session: students were given a random subset of the test words and were asked to type them out. Bem found that some students were more likely to remember words in the test if they had later practised them.

Effect preceded cause. Bem published his findings in the Journal of Personality and Social Psychology (JPSP) along with eight other experiments1 providing evidence for what he refers to as “psi”, or psychic effects. Positive results in psychology can behave like rumours: easy to release but hard to dispel. Why psychology isn't science - latimes. Psychologist Timothy D. Wilson, a professor at the University of Virginia, expressed resentment in his Times Op-Ed article on Thursday over the fact that most scientists don't consider his field a real science.

He casts scientists as condescending bullies: "Once, during a meeting at my university, a biologist mentioned that he was the only faculty member present from a science department. Psychology&#8217;s brilliant, beautiful, scientific messiness. Today, sitting down to my Twitter feed, I saw a new link to Dr.

Alex Berezow's old piece on why psychology cannot call itself a science. Is psychology a “real” science? Does it really matter? - The Curious Wavefunction. White-privilege.pdf. How Western media would cover Baltimore if it happened elsewhere. A woman faces down a line of Baltimore police officers in riot gear on Monday during protests after the funeral of Freddie Gray. (Chip Somodevilla/Getty Images) If what is happening in Baltimore happened in a foreign country, here is how Western media would cover it: International leaders expressed concern over the rising tide of racism and state violence in America, especially concerning the treatment of ethnic minorities in the country and the corruption in state security forces around the country when handling cases of police brutality.

The latest crisis is taking place in Baltimore, Maryland, a once-bustling city on the country’s Eastern Seaboard, where an unarmed man named Freddie Gray died from a severed spine while in police custody. Black Americans, the country’s largest minority ethnic group, are killed by state security forces at a rate higher than the white majority population. Nacirema Lesson.pdf. Miner-1956-BodyRitualAmongTheNacirema.pdf. Psychology experiments are failing the replication test – how is this surprising?