Nepal:The Quake That Shook Everest. Life After Earthquake in Nepal Full Documentary. Nepal earthquake: Drone footage of Kathmandu devastation. Nepal earthquake: UN launches $415m appeal. Frustration is growing in parts of rural Nepal over the pace of relief efforts, with some badly-affected villages yet to receive any assistance. 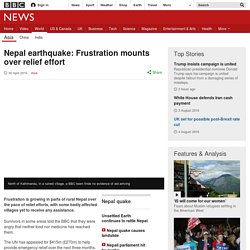 Survivors in some areas told the BBC that they were angry that neither food nor medicine has reached them. The UN has appealed for $415m (£270m) to help provide emergency relief over the next three months. Meanwhile, a teenage boy has been rescued alive after spending five days trapped under rubble in Kathmandu. Nepal earthquake: 'Terrible destruction' at epicentre. Nepal still struggling to rebuild after earthquake.

Nepal one year after the earthquake. Moment Nepal earthquake hit - BBC News. Nepal earthquakes: Devastation in maps and images. Thousands of people lost their lives and thousands more were injured in a 7.8-magnitude earthquake that hit Nepal's capital Kathmandu and its surrounding areas on 25 April. 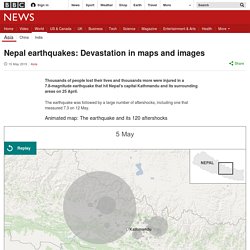 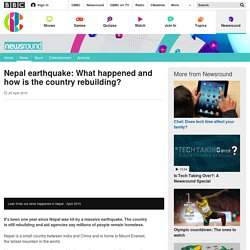 The country is still rebuilding and aid agencies say millions of people remain homeless. Nepal is a small country between India and China and is home to Mount Everest, the tallest mountain in the world. It is a very poor country and many of the houses there were not built to cope with an earthquake of this size. Guide: Why do earthquakes happen? Nepal earthquake: How is country faring one year on? Image copyright PA As Nepal marks the first anniversary of its devastating earthquake, the BBC Nepal's Surendra Phuyal assesses how the country has been coping. 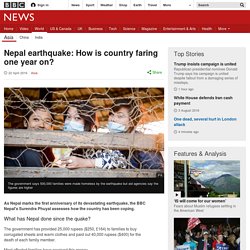 What has Nepal done since the quake? The government has provided 25,000 rupees ($250, £164) to families to buy corrugated sheets and warm clothes and paid out 40,000 rupees ($400) for the death of each family member. Most affected families have received this money. The Himalayan nation has also assessed the loss and damage caused by the quake, but has yet to officially kick start its much-delayed reconstruction mission. Image copyright AFP The National Reconstruction Authority (NRA) was only set up in December 2015. The authority is seeking 811 billion rupees ($8bn) to implement its reconstruction programme for the next five years. Nepal earthquake: The pictures taken by you then and now. Image copyright Kashish Das Shrestha One year after a massive earthquake hit Kathmandu and its surrounding areas, we return to some of those we spoke to at the time. 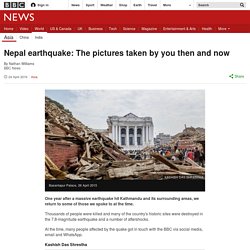 Thousands of people were killed and many of the country's historic sites were destroyed in the 7.8-magnitude earthquake and a number of aftershocks. At the time, many people affected by the quake got in touch with the BBC via social media, email and WhatsApp. Kashish Das Shrestha. Nepal earthquakes: Devastation in maps and images. Why the Nepalese quake was so destructive. The earthquake, which wreaked havoc in the Kathmandu Valley of Nepal on Saturday about noon local time, was the strongest quake in the world so far this year. 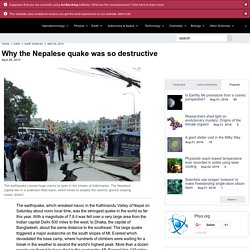 With a magnitude of 7.8 it was felt over a very large area from the Indian capital Delhi 500 miles to the west, to Dhaka, the capital of Bangladesh, about the same distance to the southeast. The large quake triggered a major avalanche on the south slopes of Mt. Everest which devastated the base camp, where hundreds of climbers were waiting for a break in the weather to ascend the world's highest peak. More than a dozen people are feared to have died in the avalanche. Mt. The worst damage reported so far occurred in the Nepalese capital Kathmandu, where many buildings collapsed and at least 524 people lost their lives. Nepal earthquake destroys Kathmandu valley's architectural treasures. Many of Kathmandu valley’s most historically important buildings have been destroyed in the earthquake that struck on Saturday, killing more than 4,000 people. 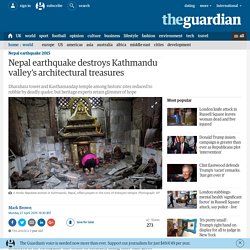 But heritage experts say glimmers of hope remain. The Dharahara, a 60-metre white minaret tower built in in 1832 has been destroyed, while the Kasthamandap, a three-storey wooden temple in Durbar Square, has also been reduced to piles of wood and rubble. Nepal earthquake moves Kathmandu but Everest height unchanged – experts. The earthquake that devastated Nepal and left thousands of people dead shifted the earth beneath Kathmandu by up to several metres south, but the height of Mount Everest likely stayed the same, experts said Tuesday. 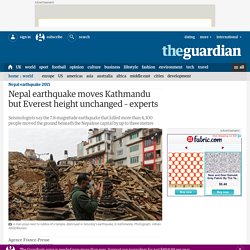 The massive 7.8-magnitude quake on Saturday was the Himalayan nation’s deadliest disaster in more than 80 years, killing more than 4,300 people and causing massive destruction. According to seismological data, the ground beneath the capital Kathmandu may have moved about three metres (10 feet) southward, said University of Cambridge tectonics expert James Jackson. 'People have nothing left': scale of Nepal quake devastation emerges. Helicopters have been crisscrossing the skies above the mountains of Gorkha district in Nepal, ferrying the injured to clinics, and taking emergency supplies back to remote villages near the epicentre of the weekend earthquake that has killed more than 4,400 people across the region. 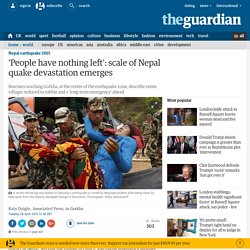 Around noon on Tuesday, two helicopters brought in eight women from Ranachour village, two of them clutching babies to their breast, and a third heavily pregnant. “There are many more injured people in my village,” said Sangita Shrestha, who was pregnant and visibly downcast as she got off the helicopter. She was quickly surrounded by Nepalese soldiers and policemen and ushered into a waiting van to be taken to a hospital. The little town of Gorkha, the district’s administrative and trading centre, is being used as a staging post to get rescuers and supplies to those remote communities after Saturday’s magnitude 7.8 earthquake.

Some villages were reachable only by air after landslides blocked mountain roads. Nepal earthquake: tour operators axe trips in fresh blow to fragile economy. Nepal faces a big hit to its economy as tour operators continued to cancel bookings to the country after a deadly earthquake struck at the weekend. 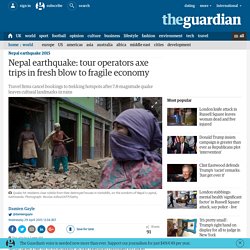 It welcomed nearly 800,000 tourists in 2013, whose spending contributed at least 2% to its GDP. Now many countries are advising against all but essential travel to Nepal as it struggles to recover from disaster. With many ancient temples and popular backpacking trails obliterated, a devastating blow to Nepal’s cultural heritage could be compounded by a jobs crisis if tourists go elsewhere. The quakes have also scuppered government plans to promote Nepal, which boasts the world’s highest mountain as well as ancient Hindu and Buddhist heritage, as a hotspot destination for mountaineers, rock climbers and spiritual adventurers. A graphical guide to the 25 April 2015 earthquake in Nepal.

The Guardian’s view on the earthquake in Nepal: it will be a long road back. Four days have elapsed since the first tremors of the earthquake rocked Kathmandu and the hundreds of towns and villages that cling to the steep green hillsides of Nepal. The UN now reckons 8 million people could be affected, more than 1 million are hungry, and the most urgent need is for body bags. Readers of some newspapers, however, could be forgiven for imagining that the real story was the fate of the hundred or so western climbers caught up in the avalanches and ice falls that the shock triggered on Everest just as the short climbing season began. Most of these have now been helicoptered out. But help of any kind has yet to reach many of the villages at the epicentre of Saturday’s earthquake.

This callous disproportion between Everest as a playground for a certain kind of privileged westerner and the poverty of their hosts is nothing new. As the UK’s Disaster Emergency Committee appeal that was launched this morning emphasises, the priority is for cash. Nepal earthquake: learn lessons or more will die in future disasters, warns expert. Thousands more Nepalese people will die in future earthquakes and the country will slide further back into poverty if the government and the international community do not learn the lessons of Saturday’s disaster, a risk-management expert has warned. More than 5,000 people are now known to have died in the magnitude 7.8 quake, although the Nepalese government warned on Tuesday that the death toll could reach 10,000.

Katie Peters, a research fellow at the Overseas Development Institute (ODI), said that although significant progress had been made in retrofitting schools and hospitals and training people how to respond to earthquakes, more needs to be done to mitigate the effects of future natural disasters. Peters, who works with Nepalese government on disaster risk, said that failure to invest in “building back better”, improving infrastructure and making sure everyone was as prepared as possible for quakes would prove costly.

Kathmandu, Nepal, before and after the earthquake – in pictures. Nepal earthquake day three – in pictures. Tourist films moment Nepal hit by earthquake - video. Nepal earthquake: authorities struggle to cope despite international aid efforts. A huge international aid operation is being mobilised to help the victims of the earthquake in Nepal, which has left tens of thousands of people homeless and raised fears of food and medicine shortages and an increased risk of waterborne and infectious diseases. As the death toll from Saturday’s quake passed 4,000, the Nepalese government said it was struggling to cope with the aftermath of the disaster and reach those cut off in remote areas. “We are overwhelmed with rescue and assistance requests from all across the country,” said Deepak Panda, a member of the country’s disaster management agency.

Lila Mani Poudyal, the government’s chief secretary and the rescue coordinator, appealed for more help from the international community, saying Nepal was short of everything from paramedics to electricity. “We are appealing for tents, dry goods, blankets, mattresses, and 80 different medicines ... that we desperately need now,” he told reporters. “Anyway, there’s not much point. 'The ground is shaking': Nepal earthquake triggers avalanche at Everest base camp – video.

Get tips and resources by joining America’s PrepareAthon! Read more.Magnitude 7.8 Earthquake in Ecuador USGS is providing up-to-date information. Read moreMagnitude 7.0 Earthquake in Japan USGS is providing up-to-date information.Read more.Magnitude 6.2 Earthquake in Japan USGS is providing up-to-date information. Read more.Induced Earthquakes Raise Chances of Damaging Shaking in 2016 For the first time, new USGS maps identify the potential for ground shaking from both human-induced and natural earthquakes in 2016. Read more.USGS Science for an El Niño Winter When El Niño shows up, the USGS goes to work monitoring its effects. One Year After a Devastating Earthquake, Nepal Is Still in Ruins. It was a miracle, the Nepalis say, that the 2015 Gorkha earthquake, which registered a magnitude of 7.8 and shook their Kathmandu Valley onto the world stage, happened on a Saturday morning.

Quick facts: What you need to know about the Nepal Earthquake. All photos: Miguel Samper for Mercy Corps. Narratives from Nepal: Relief and rebuilding after the Gorkha Earthquake. People at base camp on Everest — shown here during an avalanche in 2013 — felt the shaking of the April 25 Gorkha quake, which was followed by an enormous avalanche that killed 19 people. Credit: Deana Zabaldo, CC BY-NC-ND 2.0. Base Camp, Mount Everest, April 25, 2015, about noon: A tremendous boom echoes through the air, the ground heaves and a wall-like cloud of snow propelled by an avalanche advances toward the tents. Mountaineers scatter, diving into tents to avoid the blast. One mountaineer has a video camera and captures the whole thing, as he curses and dives into a tent while the cloud of snow engulfs him.

He survives, but 19 others perish. A few hundred kilometers away, Ben Erdmann, a professional mountaineer from Alaska, stands at about 6,000 meters elevation on the north face of Annapurna I. “It was like the [expletive] apocalypse up there, it was so [expletive] intense — hundreds of avalanches were triggered all at once,” Erdmann says. How Much Worse Could It Have Been? NSET-Nepal, Earthquake Safe Communities in Nepal by 2020.