Nepal schools after the quakes

Reconstruction of Durbar High School begins. Learning to reconstruct. Volunteers from around the world are filling the gap left by the government in helping rebuild quake-damaged schools Shreejana Shrestha BIDUR — Brought up in a family where education was an utmost priority, Carlota Padeira needed little convincing to fly to Nepal when she learnt about how All Hands Volunteers was helping rebuild schools destroyed in the 2015 earthquakes. 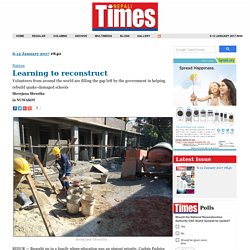 The 22-year-old Portuguese who is doing her masters in clinical psychology in London made personal appeals and raised funds through Facebook and Instagram to help rebuild some of the schools destroyed by the earthquakes before she came to Nepal. “Every child should have an opportunity to learn inside strong buildings where they can dream of a wonderful future,” says Padeira. She is currently working to reconstruct classrooms at the Prithvi Secondary School in Bidur municipality of Nuwakot district. Volunteer groups like All Hands have stepped in to fill the gap left by slow government response.

Read also. Quake-hit school runs classes under open sky. Yarusha Nepali, one of the students, says she only goes to school if the weather is fine Feb 6, 2016- After the devastating earthquake of April 25, 2015 destroyed the school building of Bindabasini Primary School of Pachok VDC-3 in Lamjung district, the school has been running its classes under the open sky. 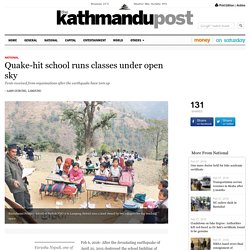 The school has been using a land owned by two villagers for teaching space. “Classes do not take place when it rains, the weather is too cold or windy,” said Ram Bahadur Ghimire, the headmaster. “The tents we received from some social organisations after the earthquake have torn up and no longer useful.” Schoolteacher Him Kumari Gurung said the children have trouble learning because of cold weather. “Wearing warm clothes does not help because they have to stay out,” he said.Yarusha Nepali, one of the students, said she only goes to school if the weather is fine. Back to classrooms. Earthquake resistant classrooms of Shree Bhim Vidhya Ashram Sec School. 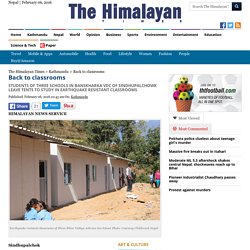 Photo: Courtesy Childreach Nepal Sindhupalchok Buildings of three government schools in Banskharka VDC, Sindhupalchok — Shree Bhim Bidya Ashram Secondary School, Shree Bal Bikash Primary School, and Shree Janahit Lower Secondary School — collapsed due to the Gorkha earthquake in 2015. The students were forced to study under tents and even inside unsafe classrooms. Seven months later, they have earthquake resistant steel framed classrooms, painted in light blue and green colours, where they can study without any disturbances and feel safe.

Childreach Nepal, that works for children, has constructed 20 classrooms for these schools (two for Shree Bal Bikash, four for Shree Janahit, and 14 for Shree Bhim Bidya Ashram), working with the Government. What's New - Press Room - World Education, Inc. January 11, 2016 January 11, 2016: Continuing to Support the Rebuilding Process While news headlines about the earthquakes in Nepal may have diminished, World Education's commitment has not. 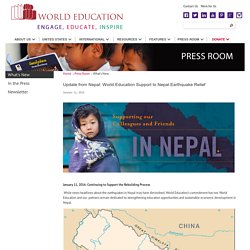 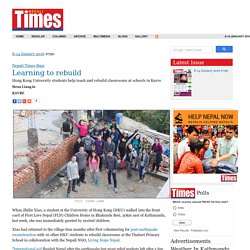 Xiao had returned to the village four months after first volunteering for post-earthquake reconstruction with 16 other HKU students to rebuild classrooms at the Thakuri Primary School in collaboration with the Nepali NGO, Living Hope Nepal. “International aid flooded Nepal after the earthquake but most relief workers left after a few months,” says Xiao, “we returned because we realised that Nepal still needs help to rebuild.” Nepal's 'ghost schools' hide large-scale corruption.

'In some cases, we found a building, but no people. 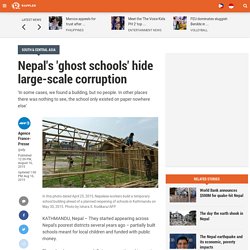 In other places there was nothing to see, the school only existed on paper nowhere else' In this photo dated April 25, 2015, Nepalese workers build a temporary school building ahead of a planned reopening of schools in Kathmandu on May 30, 2015. Photo by Ishara S. Kodikara/AFP KATHMANDU, Nepal – They started appearing across Nepal's poorest districts several years ago – partially built schools meant for local children and funded with public money. The schools never opened. U r welcome, wanna cu ASAP 4 a drink. ‘What is the main massage from our martyrs?’ 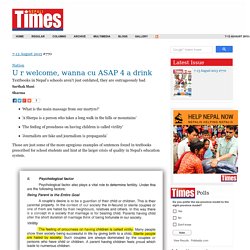 ‘A Sherpa is a person who takes a long walk in the hills or mountains’‘The feeling of proudness on having children is called virility’‘Journalists are fake and journalism is propaganda’ Lesson still to be learnt. The earthquake is an opportunity to rebuild Nepal’s education system, not just fallen schools "SAYAUN THUNGA": Children in Barabise of Sindhupalchok sing the national anthem and attend class in a tent after their school building was destroyed in the 25 April earthquake. 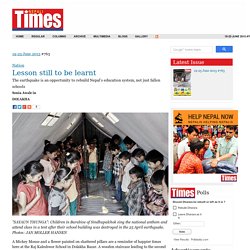 Photos: JAN MØLLER HANSEN A Mickey Mouse and a flower painted on shattered pillars are a reminder of happier times here at the Raj Kaleshwor School in Dolakha Bazar. A wooden staircase leading to the second floor is dangling precariously – there is no second floor. Desks and benches are crushed and scattered. MELA SCHOOL #1 : BAL PRATIVA, KAVRE, NEPAL. Makwanpur DEO to set up temp learning centres. HETAUDA, MAY 28 - The District Education Office (DEO) in Makwanpur plans to resume schools from May 31 by establishing temporary learning centres, managing multiple classes as well as shifts and placing students in nearby schools. 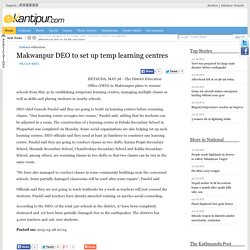 Schools reopen in districts amidst uncertainty, confusion. Students of local secondary school in Sangkosh-9 clear the debris of the quake-damaged classrooms on the first day of the school after the April 25 earthquake. 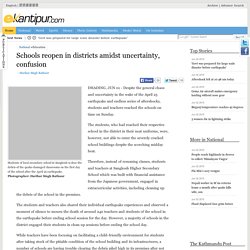 Photographer: Harihar Singh Rathaur DHADING, JUN 01 - Despite the general chaos and uncertainty in the wake of the April 25 earthquake and endless series of aftershocks, students and teachers reached the schools on time on Sunday. The students, who had reached their respective school in the district in their neat uniforms, were, however, not able to enter the severely cracked school buildings despite the scorching midday heat. Therefore, instead of resuming classes, students and teachers at Sangkosh Higher Secondary School which was built with financial assistance from the Japanese government, engaged in extracurricular activities, including cleaning up the debris of the school in the premises. Nepal quake: Schools in affected areas start to re-open - BBC News. Thousands of schools damaged during April's devastating earthquake in Nepal have begun to re-open. More than 25,000 classrooms in some 8,000 schools were destroyed in the 7.8 magnitude quake and its aftershocks, and more than 8,000 people died.

Many have only been rebuilt on a temporary basis using materials such as bamboo, wood and tarpaulin. Classes will initially focus on group activities to help children recover from the trauma of the disaster. Earlier this week, the United Nations said that one month on from the quake, the world needed to provide more food and shelter for those left homeless. Meanwhile, the Nepalese government - which has been criticised for being slow to respond - has called for more direct aid funding.

Nervous return. Can you do a quick thing to help nearly a million kids in Nepal survive the earthquake aftermath? Nearly 4,000 are dead from the intense earthquake and avalanche. For many Nepalese, the fight for survival has just begun: A family takes shelter on a sidewalk in the Kathmandu city centre. They need warm blankets and shelter from the elements. But even more crucially, first they need clean water: Nepal's 8 Key Historic Sites: What's Rubble, What's Still Standing.

The collapse of Kathmandu's 183-year-old Dharahara Tower, which once loomed nine stories over the ancient city and modern capital of Nepal, has become a symbol of nation’s cultural loss in the wake of last weekend's earthquake. (See how the earthquake has devastated Nepal.) While the 19th-century watchtower was a civic icon, sites of critical importance to the more ancient cultural and religious legacy of Nepal have also been damaged and destroyed by the quake. A country that occupies a mountainous land 1/20 the size of India (approximately the size of the U.S. state of Arkansas), Nepal is nonetheless home to eight UNESCO World Heritage cultural sites.

That includes three royal cities and several Hindu and Buddhist sites within the Kathmandu Valley, as well as Lumbini, the legendary birthplace of the Buddha, all of which are in the area affected by the quake. (Read about the discovery of the world's oldest Buddhist shrine.) Kathmandu Durbar Square Bhaktapur Durbar Square.

The 7.8 quake has claimed more than 5,000 lives. Many survivors remain in desperate need of food and water. Thousands of people are queuing to board buses and leave the capital, amid fears of further aftershocks. Nepal earthquake: How India and China vie for influence - BBC News. The Brief » Blog Archive » 82 hours. In a small alley in Gongabu bus park are a row of guest houses that usually accommodate Nepali migrant workers on their way to or from their home districts. Today, the guest houses are all leaning on each other, with broken windows, cracks and gapoing holes where their walls used to be.

A View of Katmandu After the Earthquake. Photo KATMANDU, Nepal — It had been an unseasonably cold and rainy Saturday morning. Across Nepal’s Countryside, Desperate Journeys to Ruined Homes After Quake. Photo RAMCHE, Nepal — Madhu Badu had been on the road for the better part of three days, trying to get back to his native village, back to his wife and children, near the epicenter of Nepal’s devastating earthquake northwest of Katmandu. His journey had begun on a bus, but the roads had become impassable and now he was on foot. Nepal earthquake: UN launches $415m appeal - BBC News. Frustration is growing in parts of rural Nepal over the pace of relief efforts, with some badly-affected villages yet to receive any assistance.

Survivors in some areas told the BBC that they were angry that neither food nor medicine has reached them. The UN has appealed for $415m (£270m) to help provide emergency relief over the next three months. Meanwhile, a teenage boy has been rescued alive after spending five days trapped under rubble in Kathmandu. Massive Earthquake Rattled Nepal. - Thomaslkelly. Could Nepal's messy politics hamper relief efforts? How Not to Report on an Earthquake. Photo As of Tuesday morning, exactly three days have passed since a 7.8-magnitude earthquake shook Nepal, killing thousands and leaving millions in need of help. Preparedness issues in Nepal earthquake recovery. Nepal rescuers find more quake survivors as banks, shops reopen. Kathmandu (Alliance News) - A Nepalese woman was rescued on Thursday after being buried under a guest house in Kathmandu since the massive earthquake which hit the country on Saturday, claiming thousands of lives, police and Interior Ministry officials confirmed.

Krishna Kumar Khadka, who was in a serious condition, was the second survivor recovered on Thurday, Interior Ministry spokesman Laxmi Dhakal, said. Giving to the living. Was the Nepal earthquake twice as big as we thought? This item has been corrected. Thanking the Living Goddess for life. Nepal quake: aid finally begins to arrive in remote villages, sent by locals. Facebook. Nepal earthquake death toll exceeds 6,000 with thousands unaccounted for. Effective and Organised Fundraising for Nepal. Nepal’s other disaster: Its politics. Quake should serve to shake up Nepal&apos;s lax system of government. Nepal’s Dangerous Dams. My Republica - Shut the window. The Brief » Blog Archive » Real story on PM Relief Fund. DN! Nepal One Week After the Big One. Want to Help Nepal Recover From the Quake? Cancel Its Debt. In the aftermath. To Restore Its Shattered Treasures, Nepal Has A Secret Weapon. Death Toll In Nepal Crosses 6,800. Nepal Earthquake May Trigger a New Wave of Migrant Workers - India Real Time.

Nepalese migrants return home to face earthquake devastation. Bureaucratising relief. Closing the loop: life before and after the earthquake. #GoHomeIndianMedia: a Reporter Covering Nepal Weighs In. Official: Nepal earthquake toll to climb 'much higher' We Are Injured in Nepal, But We Are Not Broken  Kathmandu rose three feet but Mt. Everest dropped by an inch in quake.