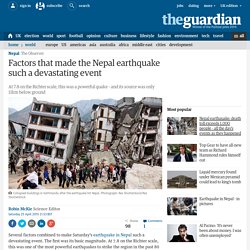 The first was its basic magnitude. At 7.8 on the Richter scale, this was one of the most powerful earthquakes to strike the region in the past 80 years. In addition, it was a shallow event with a source that was only 11km below ground. That has special consequences, according to David Rothery, professor of planetary geosciences at the Open University. Nepal quake: Eyewitness accounts - BBC News. The most powerful earthquake in decades has struck Nepal, demolishing buildings and leaving hundreds of people dead and others trapped and injured. 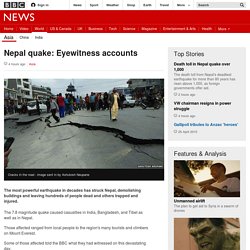 The 7.8 magnitude quake caused casualties in India, Bangladesh, and Tibet as well as in Nepal. Those affected ranged from local people to the region's many tourists and climbers on Mount Everest. Some of those affected told the BBC what they had witnessed on this devastating day. Nepal quake: Relief operation faces challenges - BBC News. Nepal has been expecting this earthquake for a long time. 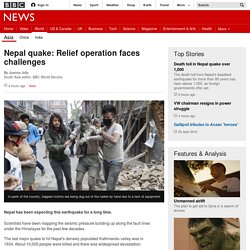 Scientists have been mapping the seismic pressure building up along the fault lines under the Himalayas for the past few decades. The last major quake to hit Nepal's densely populated Kathmandu valley was in 1934. About 10,000 people were killed and there was widespread devastation. Since then, the population of the valley has swelled to more than 2.5 million.

Kathmandu and the surrounding towns that dot the valley floor are now crammed full of new, overcrowded and often poorly constructed buildings. Nepal death toll climbs towards 2,000 as world responds to earthquake. The death toll from the devastating earthquake in Nepal climbed above 1,900 on Sunday and was continuing to rise as officials struggled to gauge the full scale of the disaster and the world rushed to provide desperately needed aid. 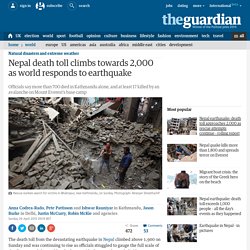 Dozens of aftershocks jolted Nepal on Saturday and Sunday as people sheltered where they could. Nepalese authorities continually revised the number of dead upwards a day after the Himalayan country was shaken by a magnitude 7.8 quake that wrecked houses, flattened centuries-old temples and triggered avalanches on Mount Everest. More than 5,000 people had been injured, with the number of dead and injured expected to rise in the coming days. Nepalese police officials said more than 700 people died in Kathmandu alone. An avalanche triggered by the quake struck a section of Everest’s base camp, killing at least 17 people and injuring 61 others, local reports said. “We hardly slept through the night. “At least I knew my family was safe. “I hardly got any sleep. Everest Climbers Killed In Quake Avalanche. At least 10 people have been reported killed after an earthquake triggered a "huge avalanche" near the Everest Base Camp. 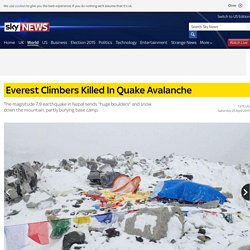 A Nepal tourism official said the part of the Everest base camp was buried. "We don't have the details yet, but 10 have been reported dead so far, including foreign climbers," Gyanendra Kumar Shrestha said. Romanian mountaineer Alex Gavan said there was panic as the avalanche hit. "Everest base camp huge earthquake then huge avalanche from pumori. Running for life from my tent. Video: Hundreds Dead After Nepal Quake Images from Everest showed belongings scattered on the ground and snow covering tents. Arjun Vajpai, who filmed himself at camp, said there had been "a big few avalanches". "From here we had quite a bit of rockfall," he said. "Most of our team is okay, we are doing well, some of our team members just moved up today towards camp one and camp two. High death toll as earthquake strikes Nepal - BBC News.

Nepal earthquake in pictures: Photos show devastation caused by 7.8 magnitude earthquake - Asia - World - The Independent. Tremors were felt as far away as Pakistan, Bangladesh, Tibet and India as more than 700 people, including children, were killed in five countries. 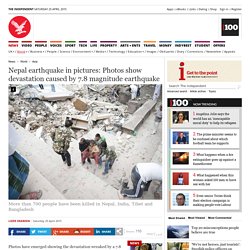 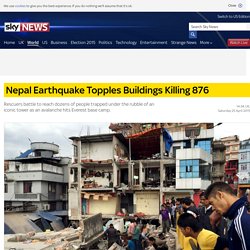 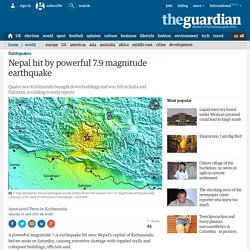 Nepal’s information minister, Minendra Rijal, told India’s NDTV station that there are reports of damage in and around Kathmandu but no immediate word on casualties. He said rescue teams were on the scene. The epicentre was50 miles (80km) north-west of Kathmandu, he said. The Kathmandu valley is densely populated with nearly 2.5 million people, with the quality of buildings often poor. An Associated Press reporter in Kathmandu said a wall in his compound collapsed and there was damage to nearby buildings. The US Geological Survey revised the magnitude from 7.5 to 7.9 and said the quake hit at 11:56 am local time at a relatively shallow depth of seven miles. Nepal Earthquake 2015 - Geography for 2015. Nepal’s Landmarks, Before and After the Earthquake.

Villages Near Nepal Earthquake’s Epicenter Are Desperate as Death Toll Tops 3,800. SAURPANI, Nepal — Residents of remote mountain villages at the epicenter of ’s powerful earthquake said on Monday that they were running out of food, and that two days after the quake they had seen no sign of outside assistance. 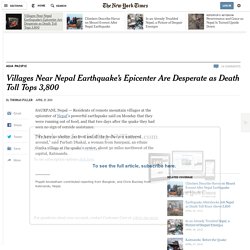 “We have no shelter, no food and all the bodies are scattered around,” said Parbati Dhakal, a woman from Saurpani, an ethnic Gurka village at the quake’s center, about 50 miles northwest of the capital, Katmandu. Villagers described a landscape of destruction. There had been 1,300 houses in Saurpani, but one resident, Shankar Thapa, said, “All the houses collapsed.” Several dozen villagers walked two hours down a jungle path on Monday to the banks of the Daraudi River to bury their dead. They carried 11 bodies attached to bamboo poles and lowered them into holes along the riverbank.

Continue reading the main story Mr. “We don’t even know how many people are missing,” he said. Nepal earthquake: what the thousands of victims share is that they are poor. After more than 36 hours of darkness, Garima Saha, 12, woke up on Monday morning in a makeshift orthopaedic surgery ward in the reception hall of a hospital in central Kathmandu. 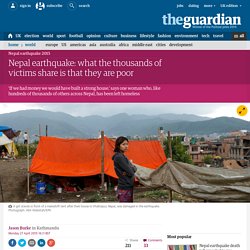 When she opened her eyes, finally regaining consciousness having been buried for nine hours in rubble after Saturday’s earthquake, she found she was safe, but in great pain with multiple fractures to her shoulder. She also learned that her mother and elder brother were dead. An hour or so later, held by her sobbing grandmother who had rushed from a distant village to be with her, she was gently raised to a semi-upright position in the bed she had been placed in after a long surgery on Saturday night. Garima looked out with stunned eyes on a scene that many in earthquake-prone Kathmandu suspected they might one day see, but fervently hoped they never would. Nepal earthquake destroys Kathmandu valley's architectural treasures.

Many of Kathmandu valley’s most historically important buildings have been destroyed in the earthquake that struck on Saturday, killing more than 4,000 people. But heritage experts say glimmers of hope remain. The Dharahara, a 60-metre white minaret tower built in in 1832 has been destroyed, while the Kasthamandap, a three-storey wooden temple in Durbar Square, has also been reduced to piles of wood and rubble.

In an Already Troubled Nepal, a Picture of Despair Emerges. Photo NEW DELHI — Her home and village near the earthquake’s epicenter were destroyed, her grandfather was killed, and no one from outside the village — not a soldier, police officer or rescue worker — had arrived to help. Bhima Lama, a Nepali living in New Delhi, pieced together this picture of despair from patchy cellphone calls to villagers now lacking shelter, and making do with little food and a trickle of water. It is a story that will probably be told again and again in the coming weeks as rescuers fight their way over broken roads and past landslides to reach ’s countless remote areas.

Mapping the Nepal Eq - ARCGIS. Nepal earthquake: authorities struggle to cope despite international aid efforts. A huge international aid operation is being mobilised to help the victims of the earthquake in Nepal, which has left tens of thousands of people homeless and raised fears of food and medicine shortages and an increased risk of waterborne and infectious diseases. As the death toll from Saturday’s quake passed 4,000, the Nepalese government said it was struggling to cope with the aftermath of the disaster and reach those cut off in remote areas. “We are overwhelmed with rescue and assistance requests from all across the country,” said Deepak Panda, a member of the country’s disaster management agency. Lila Mani Poudyal, the government’s chief secretary and the rescue coordinator, appealed for more help from the international community, saying Nepal was short of everything from paramedics to electricity. “We are appealing for tents, dry goods, blankets, mattresses, and 80 different medicines ... that we desperately need now,” he told reporters.

“Anyway, there’s not much point. Nepal earthquake: new footage shows extent of damage - video. Nepal was made vulnerable by more than its violent geology. Kathmandu was ever a disaster-in-waiting. The densely populated capital of one of the world’s poorest countries clings to the slopes of the seismically unstable Himalayas. The city was nearly levelled and 8,500 killed in its last great earthquake 81 years before. It had history. On Saturday the long-feared calamity struck. I first arrived in Kathmandu in 2007 to begin a new job with Oxfam. With the Kashmir tragedy fresh in my mind, I remember looking at the thousands of flimsy shacks and hovels lining Kathmandu’s dusty slums and the sturdier, but still precarious, multi-tiered family homes, the cheaply built apartment blocks and ornate temples that collectively give the city its colourful, distinctive appearance.

But it’s not just its violent geology that made Kathmandu fundamentally flawed. Nepal earthquake: latest. Nepal earthquake: How are climbers being evacuated from Everest? - BBC News. The avalanches triggered by Saturday's earthquake in Nepal led to the worst disaster in the history of Mount Everest. Eighteen people have been confirmed dead so far and rescue teams are racing to get to those who survived before their supplies run out. People involved spoke to the BBC about how they are co-ordinating the rescue operation. Large cracks in road after Nepal earthquake - video. Google 'person finder' tool deployed to help relatives find loved ones in Nepal. Google engineers first launched Person Finder in response to the 2010 earthquake in Haiti, which killed more than 100,000 people.

But it had been under development for years, part of an open-source effort to solve a problem identified during Hurricane Katrina in 2005. As more and more people turned to the internet for help in searching for missing persons, developers realised that relatives and aid workers were having to sift through dozens of websites to find information. People free a man from the rubble of a destroyed building Since then it has popped up at a string of major emergencies, everything from the 2011 Japanese earthquake and tsunami to the 2013 Boston Marathon bombing. It has been deployed twice before in India: for an earthquake in Jammu and Kashmir last year and flooding and mudslides in Uttarakhand a year earlier. It is part of a suite of applications developed by Google's crisis resource team.