Create a Nation. The Syrian women and girls sold into sexual slavery in Lebanon. Beirut, Lebanon - "How do I know most of the women working as prostitutes are controlled?

" asked Paul, a volunteer for the Jesuits, a religious order of the Roman Catholic Church, before answering his own question. - Lebanon's Economy and Politics: Data Visualization and Infographics. The following series of visualizations and infographics are adapted from a Twitter thread by Ahmad Barclay. 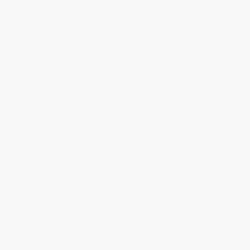 They were originally produced by Ahmad Barclay and Executive Magazine, where they were first published. The Currency Swap There has been a lot of talk of a foreign currency shortage. While much of it has to do with country’s balance of trade, or rather how much foreign currency it spends on the international market versus how much foreign currency it earns, domestic fiscal and monetary policy have played an important role in exacerbating the problem. In 2016, Banque du Liban (the Central Bank of Lebanon) offered Lebanese commercial banks a profitable arrangement to exchange billions of US dollars worth of their foreign currency reserves for Lebanese liras.

Declining Real Estate Market. Opinion: Is the crisis of capitalism a crisis of democracy? Globalization has many winners, but there are losers too, and they are taking to the streets around the world. 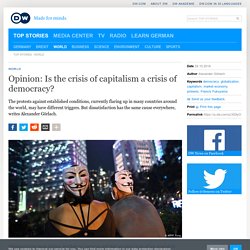 The list of countries where there is unrest spans the globe: Hong Kong, Lebanon, France, Chile and Ecuador. These protests all have similar roots: In Lebanon a tax was supposed to be levied on the use of social networks. Housing is too expensive in Hong Kong. In Chile, the price of bus tickets was set to rise. How has my country voted at the UN? HitchHiking IB I&S.

Development. When more women are decision-makers, the environment wins. Women farmers in Tanzania When more women are involved in group decisions about land management, the group conserves more—particularly when offered financial incentives to do so, according to a new CU Boulder study published this week in Nature Climate Change. 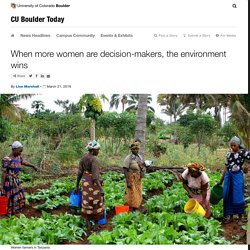 The study, involving 440 forest users from three developing countries, sheds new light on the role gender quotas for local governing bodies could play in reducing global deforestation and greenhouse gas emissions while also curbing local inequalities. "When policymakers think about what to do to increase conservation around the world, gender quotas don’t even come up as a viable policy instrument,” said senior author Krister Andersson, a political science professor and researcher at the Institute of Behavioral Science. “This study suggests they should.” “We wanted to know what would happen if you offered financial incentives for groups to conserve and made sure at least half the members were women,” said Andersson.

World 101 -Council on Foreign Relations. When NPR Is More Dangerous than Fox News. By Robert Wright When military conflict between the United States and Iran seems to be approaching, and you’re trying to get a clear picture of the situation, I’m only half-kidding when I say there’s a case to be made for staying glued to Fox News. 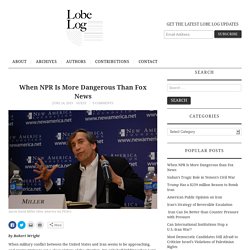 The new left economics: how a network of thinkers is transforming capitalism. For almost half a century, something vital has been missing from leftwing politics in western countries. 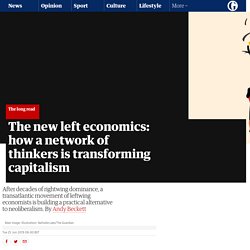 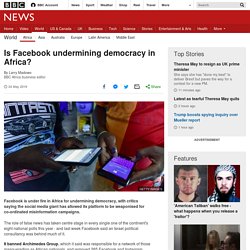 The role of false news has taken centre stage in every single one of the continent's eight national polls this year - and last week Facebook said an Israel political consultancy was behind much of it. It banned Archimedes Group, which it said was responsible for a network of those masquerading as African nationals, and removed 265 Facebook and Instagram pages and groups involved in "co-ordinated inauthentic behaviour" mainly targeting Nigeria, Senegal, Togo, Angola, Niger and Tunisia.

Nanjira Sambuli, from the World Wide Web Foundation, says it has taken Facebook too long to pay attention to this problem in developing countries. Why the media fails to cover Palestine with accuracy and empathy. Glasgow, Scotland - Often dubbed an open-air prison on account of Israel's and Egypt's ongoing air, land and sea blockade of the coastal enclave, Gaza is, according to Amnesty International and several other rights groups, on the brink of a humanitarian disaster. 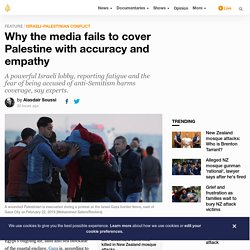 In February, Antonio Guterres, the United Nations secretary-general, highlighted the crisis, saying that the near two million Palestinians of the besieged strip "remain mired in increasing poverty and unemployment, with limited access to adequate health, education, water and electricity". But the mainstream media does not always succeed in telling Palestine's contemporary story with accuracy and empathy. On Thursday, in the Scottish city of Glasgow, experts discussed the media's role in covering one of the most pressing and divisive issues in international politics. She was based in Jerusalem in the 1990s. Today, similar concerns remain. International Law MOOC. Only six countries in the world give women and men equal legal work rights. Resources for Global Politics – Just another United World College of South East Asia Portfolios Sites site.

Iran’s 40 Years of Strife by Javier Solana. POLITICAL THEORY - John Rawls. Michael Kosh. HitchHiking IB I&S. PS On Point. Analysis of international affairs and global trends. World News Headlines, Essays and Opinion. Why Trump and his team want to wipe out the EU. The Trump administration not only dislikes the European Union, it is out to destroy it. 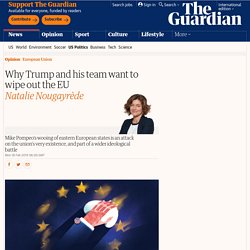 The trip by the US secretary of state, Mike Pompeo, to Europe last week was episode three of the onslaught, designed to play on east-west divisions within the EU. Episode one was Donald Trump’s 2017 Warsaw speech, infused with nativist nationalism. Episode two was Trump’s 2018 moves on tariffs, and his tearing up of key agreements such as the Iran nuclear deal and the Intermediate-range Nuclear Forces (INF) treaty.

To which should be added his open encouragements to Brexiteers, and his decision to pull out of Syria. All of the above affect European (including British) interests in very concrete ways, unlike mere tweets or insults thrown at allies. Europe is trying to put up a resistance. Should We Take Global Governance Seriously? Angela Merkel criticises US isolationism, urging 'win-win solutions' Angela Merkel has turned her fire on America’s “home alone” policies, saying multilateral bodies cannot simply be smashed up, and warned the US president, Donald Trump, that Europe must not be excluded from discussions on future nuclear disarmament, Syria or trade. 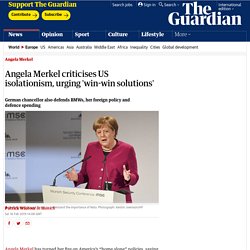 Warning of a collapse of the international order into tiny parts, the German chancellor said: “We cannot just smash it. We need to cooperate.” Merkel quoted the US Republican senator Lindsey Graham as saying: “Multilateralism may be complicated, but it’s better than simply staying at home alone.” John Mearsheimer and Stephen Walt · The Israel Lobby: the Israel Lobby · LRB 23 March 2006. For the past several decades, and especially since the Six-Day War in 1967, the centrepiece of US Middle Eastern policy has been its relationship with Israel. The combination of unwavering support for Israel and the related effort to spread ‘democracy’ throughout the region has inflamed Arab and Islamic opinion and jeopardised not only US security but that of much of the rest of the world. This situation has no equal in American political history.

Why has the US been willing to set aside its own security and that of many of its allies in order to advance the interests of another state? One might assume that the bond between the two countries was based on shared strategic interests or compelling moral imperatives, but neither explanation can account for the remarkable level of material and diplomatic support that the US provides. Instead, the thrust of US policy in the region derives almost entirely from domestic politics, and especially the activities of the ‘Israel Lobby’.

Bill Gates says poverty is decreasing. He couldn’t be more wrong. The embargo on Cuba failed. Let’s move on. [Opinion] HAVANA — It has been 60 years since Fidel Castro marched into Havana, so it’s time for both Cuba and the United States to grow up. Let’s let Cuba be a normal country again. Cuba is neither the demonic tyranny conjured by some conservatives nor the heroic worker paradise romanticized by some on the left. It’s simply a tired little country, no threat to anyone, with impressive health care and education but a repressive police state and a dysfunctional economy. Driving in from the airport, I saw billboards denouncing the American economic embargo as the “longest genocide in history.” That’s ridiculous.

How diverse the new United States' leadership really is. Out of 23 members of cabinet are white men Cabinet members are among the most powerful people in the county. Their job is to lead their respective executive departments and advise the president. The Brexiteers’ idea of how WTO rules would work is pure fantasy. A £2bn contingency fund, 3,500 troops on standby, and reserved space on ferries: these are some of the government’s plans for a no-deal Brexit. With Theresa May stepping up the planning, what was once seen as economic disaster for Britain, is being rebranded as a “clean break” from the EU on World Trade Organisation terms. What's the UN global compact on migration? OPEC’s Bigger Problems. Visualizing 2019: Trends to Watch. Facinghistory. Is the GCC dead? PS - The World's Opinion Page. Now the EU needs to hand power to its citizens. Here’s why.

Most people who believe in the EU project would like to see a truly democratic European parliamentary system emerge one day; a system in which EU citizens, not heads of government meeting behind closed doors, make the decisions. Europeans’ love-hate relationship with interdependence. Global Governance ..into the Future. Is a US-China war in Asia inevitable? New York City - Chinese President Xi Jinping's recent talk of "preparing for war and combat" is just the latest example of tough language that has stoked fears of a military flare-up with the United States over two potential flashpoints: Taiwan and the South China Sea.

Last week, Xi told his military commanders in Guangdong province to "concentrate preparations for fighting a war", in comments distributed by government-run media following a four-day visit to the south. NGOs and Global Policy-Making. What is the UN general assembly? The $80 Trillion World Economy in One Chart. Trump at 100 days: Cartoon views from around the world. Iran-US relations: Nine cartoons tell the story. Why America's Russia hysteria is dangerous. Freedom House. Theory in Action: Liberalism. Theory in Action: Realism.