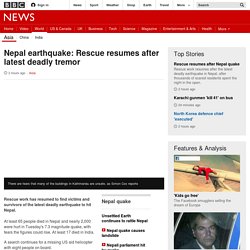 At least 65 people died in Nepal and nearly 2,000 were hurt in Tuesday's 7.3 magnitude quake, with fears the figures could rise. At least 17 died in India. A search continues for a missing US aid helicopter with eight people on board. Thousands of Nepalis spent the night in the open. Many have not returned to their homes since a 7.8 magnitude quake on 25 April that killed over 8,000. Tuesday's earthquake was centred about 76km (47 miles) east of the capital, Kathmandu, near the town of Namche Bazaar. A second tremor of 6.3-magnitude hit Nepal 30 minutes later and numerous other aftershocks continued into Wednesday morning.

Nepal earthquake: Eyewitness accounts - BBC News. A second major earthquake has struck Nepal just a fortnight after the first, causing tremors as far away as Delhi and sending people running into streets and open areas. 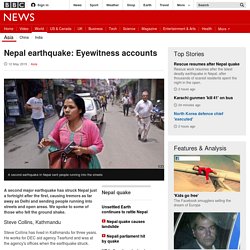 We spoke to some of those who felt the ground shake. Steve Collins, Kathmandu Steve Collins has lived in Kathmandu for three years. He works for DEC aid agency Tearfund and was at the agency's offices when the earthquake struck. "Everything suddenly started shaking. "I cycled to find my wife and children and there were trees down in the road and some walls, but it's difficult to tell because lots of walls are already down. "The earthquake felt like it carried on for a long while and even when it died down the earth was shaking under our feet, like standing in a boat. "We're all outside at the moment. Unsettled Earth continues to rattle Nepal - BBC News.

By any stretch, a magnitude-7.3 quake is a big one. 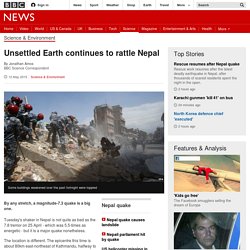 Tuesday's shaker in Nepal is not quite as bad as the 7.8 tremor on 25 April - which was 5.5-times as energetic - but it is a major quake nonetheless. The location is different. The epicentre this time is about 80km east-northeast of Kathmandu, halfway to Everest. Why Nepal is so vulnerable to quakes - BBC News. The pictures emerging from the Nepalese capital, Kathmandu, are shocking. 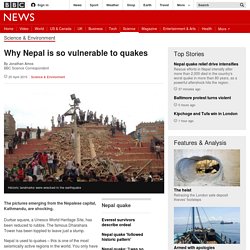 Durbar square, a Unesco World Heritage Site, has been reduced to rubble. The famous Dharahara Tower has been toppled to leave just a stump. Nepal is used to quakes – this is one of the most seismically active regions in the world. You only have to look at the Himalayas to understand that. Nepal earthquake: Eyewitness accounts - BBC News.

Nepal earthquake: Rescue resumes after latest deadly tremor - BBC News. Nepal hit by 7.3-magnitude earthquake near Mount Everest. Nepal has been hit by another strong earthquake, causing widespread panic and casualties just over two weeks after a devastating one killed more than 8,000 people, injured 18,000 and destroyed hundreds of thousands of homes. 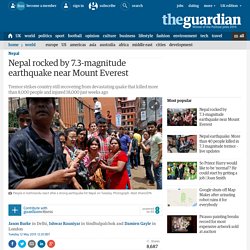 The US Geological Survey said the quake had a magnitude of 7.3 and struck 42 miles (68km) west of the town of Namche Bazaar, close to Mount Everest. It was followed closely by at least six strong aftershocks. Shockwaves were felt as far away as the Indian capital, Delhi, and Dhaka, the capital of Bangladesh. The full extent of casualties is unknown, with reports of collapsed buildings and some deaths coming in from remote areas close to the epicentre. At least four people were killed in the town of Chautara in Sindhupalchok district, north of Kathmandu, after several buildings collapsed and more than a dozen were injured in landslides. Nepal earthquake 2015. At 11.56 (NST) on 25 April, 2015, a 7.8–7.9 magnitude earthquake hit Nepal killing over 5000 people and injuring almost 8000 (source). 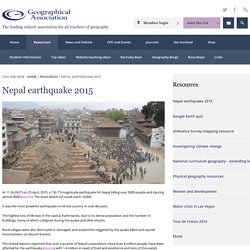 The exact death toll could reach 10,000. It was the most powerful earthquake to hit the country in over 80 years. The highest loss of life was in the capital, Kathmandu, due to its dense population and the number of buildings, many of which collapsed during the quake and after-shocks. Rural villages were also destroyed or damaged, and avalanches triggered by the quake killed and injured mountaineers on Mount Everest. The United Nations reported that over a quarter of Nepal's population, more than 8 million people, have been affected by the earthquake (source) with 1.4 million in need of food and assistance and tens of thousands without shelter. Many aid agencies are supplying aid to those effected, but this is hampered by Nepal only having one airport with a single runway. Horror in Nepal's 'worst-hit' village - BBC News. My cameraman Sanjay Ganguly and I were the first journalists to visit what is reckoned to be the worst hit village in all Nepal. 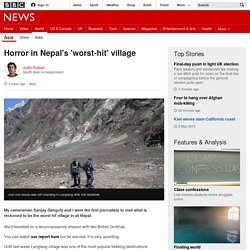 We'd travelled on a reconnaissance mission with two British Gurkhas. You can watch our report here but be warned, it is very upsetting. Until last week Langtang village was one of the most popular trekking destinations in Nepal. It was home to 435 people and 55 hotels and guest houses. Now just one house remains. Nepal quake: Why are some tremors so deadly? - BBC News. On 1 April, 2014, a Magnitude 8.2 earthquake rocked northern Chile. 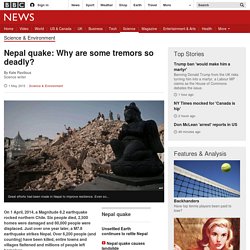 Six people died, 2,500 homes were damaged and 80,000 people were displaced. Just over one year later, a M7.8 earthquake strikes Nepal. Over 6,200 people (and counting) have been killed, entire towns and villages flattened and millions of people left homeless. Sentinel satellite reveals Nepal quake movement - BBC News. Europe's Sentinel-1a satellite has got its first good look at the aftermath of Saturday's big quake in Nepal. 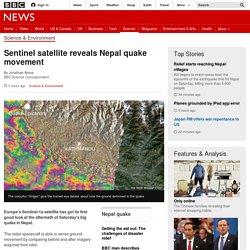 The radar spacecraft is able to sense ground movement by comparing before and after imagery acquired from orbit. Scientists turn this information into an interferogram - a colourful, but highly technical, representation of the displacement that occurs on a fault. The new data confirms an area of 120km by 50km around Kathmandu lifted up, with a maximum of at least 1m. Kathmandu daily exodus may reach 300,000 as residents flee chaos.

Desperate living conditions, and fears of disease and a breakdown in law and order in the aftermath of Saturday’s earthquake in Nepal, have sparked an exodus from the country’s capital. 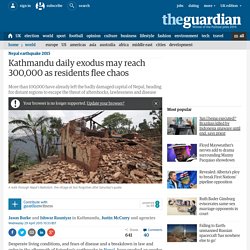 More than 100,000 people have already left Kathmandu, with officials estimating the number could reach 300,000, more than a 10th of the city’s population. Nepalis in the capital clashed with riot police and seized supplies of water as anger boiled over after buses promised by the government failed to materialise. At a checkpoint on the main highway out of Kathmandu, officials said more than 300 packed buses and coaches had passed since 5 am on Tuesday, nearly 10 times the usual number.

Most were heading for distant regions, where most Kathmandu residents are originally from. Kathmandu, Nepal, before and after the earthquake – in pictures. Nepal earthquake: how to donate. As the death toll continues to rise from Nepal’s devastating 7.8 magnitude earthquake, aid agencies are in the country delivering vital supplies, tracing lost family members and searching for survivors.

The UK’s Disasters Emergency Committee has launched an appeal to support survivors, with money going to its 13 member agencies. Here is a roundup of some of the agencies that have opened appeals for earthquake survivors. This list is not comprehensive, so feel free to highlight others in the comments section below. Nepal earthquake: rain hampers aid effort: 'nature seems to be against us'

Rescue teams worked in pouring rain on Thursday in the debris left by last week’s devastating earthquake in Nepal, but officials said the chances of finding any more survivors was bleak as the death toll neared 5,500. While rescue teams were out in the capital, Kathmandu, despite the rain, helicopters could not fly to the worst-hit areas in the countryside. “There may not be any more survivors,” said Rameshwor Dandal, chief of the disaster management centre at Nepal’s home ministry.

“The rain is adding to the problems. Nature seems to be against us.” Anger over the slow pace of the rescue flared on Wednesday with protests outside parliament. An official from Nepal’s home ministry said the number of confirmed deaths from Saturday’s 7.8 magnitude earthquake had risen to 5,489 by Thursday morning. Almost 11,000 were injured, and more than 80 were also killed in neighbouring India and Tibet.

Nepal is appealing to foreign governments for more helicopters. “This will be a long drawn-out affair. Nepal Earthquake 2015 - Geography for 2015. Drone Footage Shows Nepal Earthquake Damage. Fake quakes: rumours spread after Nepal tragedy - BBC News. In the midst of the tragedy, some of what's spreading online about the Nepal earthquake is false. Dramatic footage and images have emerged from Nepal, showing the devastation caused by the most deadly earthquake in the country in 81 years. But amid the authentic pictures are fake footage and viral hoaxes.

One of the biggest: On Facebook and YouTube, various versions of a video described as closed-circuit television footage from a Kathmandu hotel have emerged. They show an earthquake causing violent waves in a swimming pool - the video was picked up by internationalmedia and has been viewed more than 5m times. However it's not from Nepal - it appears to have been be taken during an earthquake in Mexico, in April 2010.

Nepal quake 'followed historic pattern' - BBC News. Nepal's devastating magnitude-7.8 earthquake on Saturday was primed over 80 years ago by its last massive earthquake in 1934, which razed around a quarter of Kathmandu to the ground and killed over 17,000 people. This latest quake follows the same pattern as a duo of big tremors that occurred over 700 years ago, and results from a domino effect of strain transferring along the fault, geologists say. The researchers discovered the likely existence of this doublet effect only in recent weeks, during field work in the region.

Saturday's quake, which struck an area in central Nepal, between the capital Kathmandu and the city of Pokhara, has had a far-reaching impact. Early reports indicate that nearly 2,000 people have lost their lives, with victims in Bangladesh, India, Tibet, and on Mount Everest, where avalanches were triggered. Trench investigations. Nepal earthquake: Relief starts reaching remote villages - BBC News. Aid has begun to reach remote regions near the epicentre of Saturday's devastating earthquake in Nepal. As relief efforts continue in the Kathmandu Valley, the UN says the response is broadening to include areas such as Dhading and Gorkha.

The 7.8 quake has claimed more than 5,000 lives. Many survivors remain in desperate need of food and water. Thousands of people are queuing to board buses and leave the capital, amid fears of further aftershocks. The government is providing free transport for Kathmandu residents hoping to travel to their hometowns. Police have been deployed at the main bus station, with thousands increasingly desperate to leave, AFP news agency reports. Nepal earthquake: How does the search and rescue operation work? - BBC News. The Guardian’s view on the earthquake in Nepal: it will be a long road back. Nepal Earthquake 2015. Nepal earthquake: '90% of his village was destroyed before his eyes' Hundreds of villages in the central Nepalese district of Gorkha were among the hardest hit by a 7.8-magnitude earthquake that struck the country on Saturday. The remote and mountainous region, home to an estimated 270,000 people, is struggling to evacuate survivors, with rescue efforts hampered by landslides.

Don’t rush to Nepal to help. Read this first. Weather, Hazards, Emergency Preparedness. Nepal earthquake: Panic as strong aftershock hits Kathmandu - BBC News. Nepal earthquake: Tent cities spring up in Kathmandu - BBC News. Major aftershock hits Nepal day after severe earthquake. Earthquake triggers Everest avalanche. How to help the victims of the Nepal earthquake. The Nepal Red Cross Society is the epicenter of the relief efforts and is a direct way to help the people of Nepal. Here is its online donation link; please note that their website connectivity is on and off, so you might not be able to get through. The American Jewish Joint Distribution Committee (JDC) has begun collecting funds for emerging relief efforts response to the Nepal Earthquake, which will have a critical focus on medical relief and supply delivery to earthquake survivors.

To support their efforts, donate online here. AmeriCares has sent its response team to the impact zone and relief workers are preparing shipments of medical aid and relief supplies for survivors. You can help by donating online to their disaster relief fund. CARE is on the ground and preparing to provide temporary shelter, ready-to-eat meals and water purification and latrine construction. The critical 72 hours after Nepal earthquake. Mount Everest: New avalanches from aftershocks in Nepal.