Why Self-Driving Cars Must Be Programmed to Kill. When it comes to automotive technology, self-driving cars are all the rage. 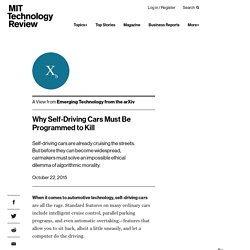 Standard features on many ordinary cars include intelligent cruise control, parallel parking programs, and even automatic overtaking—features that allow you to sit back, albeit a little uneasily, and let a computer do the driving. So it’ll come as no surprise that many car manufacturers are beginning to think about cars that take the driving out of your hands altogether (see “Drivers Push Tesla’s Autopilot Beyond Its Abilities”). These cars will be safer, cleaner, and more fuel-efficient than their manual counterparts. And yet they can never be perfectly safe. And that raises some difficult issues. The answers to these ethical questions are important because they could have a big impact on the way self-driving cars are accepted in society. So can science help? So they set out to discover the public’s opinion using the new science of experimental ethics.

Here is the nature of the dilemma. Self-Driving Cars: 5 Problems That Need Solutions. Google recently released data showing that its self-driving cars have been involved in 11 minor crashes over the past six years, which has raised questions about when such autonomous vehicles will be ready for prime time. 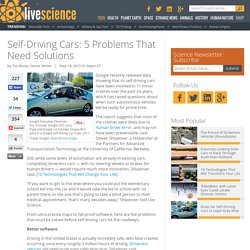 The report suggests that most of the crashes were likely due to human driver error, and may not have been preventable, said Steven Shladover, a researcher at the Partners for Advanced Transportation Technology at the University of California, Berkeley. Still, while some levels of automation are already in existing cars, completely driverless cars — with no steering wheels or brakes for human drivers — would require much more innovation, Shladover said. [10 Technologies That Will Change Your Life] From ultra-precise maps to fail-proof software, here are five problems that must be solved before self-driving cars hit the roadways.

Better software Given existing software, "that is amazingly difficult to do," he said. Better maps Better sensors Better communication. Google's driverless car is brilliant but so boring. The biggest compliment you could possibly give the Google driverless car team is that experiencing their groundbreaking product feels utterly unremarkable. 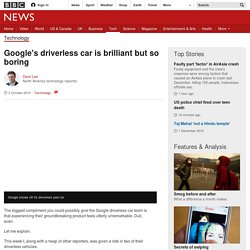 Dull, even. Let me explain. This week I, along with a heap of other reporters, was given a ride in two of their driverless vehicles. The first was a modified Lexus that has been out on the streets around here for well over a year now, and is improving and learning every day as new scenarios are logged and analysed by the team. This version, which is the most "ready" for the roads, though still years off, is essentially a normal car. The second "car" (at what point does something stop being a car?) Image copyright Google Safe and cautious It's an odd little pod, a prototype for a fully autonomous vehicle. The prototype was unveiled earlier this year, but we didn't hear much about it.

So why unremarkable? As much as I'd like to write here about the white-knuckle "Oh my gosh, there's no driver! " It was slow. Sunday driver. Advantages and Disadvantages of Electric Cars. The electric car (EV) is a relatively new concept in the world of the automotive industry. 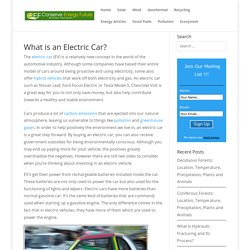 Although some companies have based their entire model of cars around being proactive and using electricity, some also offer hybrid vehicles that work off both electricity and gas. An electric car such as Nissan Leaf, Ford Focus Electric or Tesla Model S, Chevrolet Volt is a great way for you to not only save money, but also help contribute towards a healthy and stable environment. Cars produce a lot of carbon emissions that are ejected into our natural atmosphere, leaving us vulnerable to things like pollution and greenhouse gases.

In order to help positively the environment we live in, an electric car is a great step forward. By buying an electric car, you can also receive government subsidies for being environmentally conscious. EV’s get their power from rechargeable batteries installed inside the car. Advantages of an Electric Car 1. 2. 3. What Would Happen if a Future Apple Autonomous Car Made a Very Bad Decision? All the technical signs point to a future with autonomous (self-driving) cars. 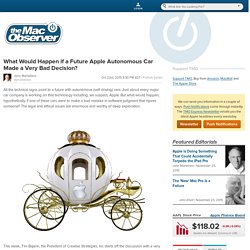 Just about every major car company is working on that technology including, we suspect, Apple. But what would happen, hypothetically, if one of these cars were to make a bad mistake in software judgment that injures someone? The legal and ethical issues are enormous and worthy of deep exploration. This week, Tim Bajarin, the President of Creative Strategies, Inc starts off the discussion with a very thoughtful essay. " Autonomous Cars and Their Ethical Conundrum. " Mr. ...we are years away from getting autonomous cars on the road and getting the right kind of government regulations passed to make this possible.

It's good that we have these early signs now because there are many ethical and legal issues to be worked out. Let’s say that I am in a self-driving car. Ponder that for a minute. Also, not considered here, and I think it should be, is the more important question of the car's responsibility to its owner.