Related Articles: Climate change. Related Articles: Earthquakes. Hundreds of bodies may be buried in Nepal avalanche:Thursday 7 May 2015. About 100 bodies were recovered in the area on Saturday and Sunday and Rimal had previously said about 120 more were buried there. 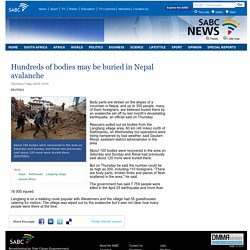 Bad weather disrupts links with avalanche-hit Nepal village:Tuesday 5 May 2015. Last week a senior EU official had estimated around 1 000 EU citizens were missing after the quake. 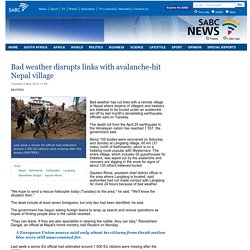 (REUTERS) Bad weather has cut links with a remote village in Nepal where dozens of villagers and trekkers are believed to be buried under an avalanche set off by last month's devastating earthquake, officials said on Tuesday. The death toll from the April 25 earthquake in the Himalayan nation has reached 7 557, the government said. About 100 bodies were recovered on Saturday and Sunday at Langtang village, 60 km (37 miles) north of Kathmandu, which is on a trekking route popular with Westerners. The entire village, which includes 55 guesthouses for trekkers, was wiped out by the avalanche and rescuers are digging in the snow for signs of about 120 others believed buried. Gautam Rimal, assistant chief district officer in the area where Langtang is located, said authorities had not made contact with Langtang for more 24 hours because of bad weather. "They can leave.

Three South Africans may still be missing in Nepal: Report:Tuesday 5 May 2015. The Department of International Relations says it's possible that there might be South African citizens still trapped in Nepal. 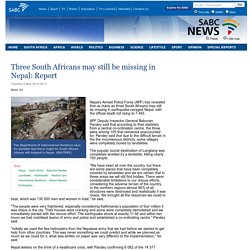 (REUTERS) Nepal’s Armed Police Force (APF) has revealed that as many as three South Africans may still be missing in earthquake-ravaged Nepal, with the official death toll rising to 7 493. APF Deputy Inspector General Baburam Pandey said that according to their statistics from a central co-ordination centre, the three were among 105 that remained unaccounted for. Shortage of helicopters hinder relief efforts in Nepal:Monday 4 May 2015. The Nepalese government is currently using 13 helicopters, including seven private ones, while the Indian Air Force is helping with 14 helicopters, to cover the country's mountainous terrain. 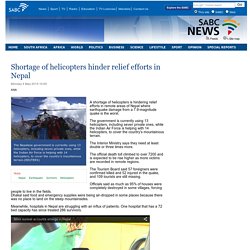 (REUTERS) A shortage of helicopters is hindering relief efforts in remote areas of Nepal where earthquake damage from a 7.9-magnitude quake is the worst. The government is currently using 13 helicopters, including seven private ones, while the Indian Air Force is helping with 14 helicopters, to cover the country's mountainous terrain. The Interior Ministry says they need at least double or three times more. The official death toll climbed to over 7200 and is expected to be rise higher as more victims are recorded in remote regions. The Tourism Board said 57 foreigners were confirmed killed and 52 injured in the quake, and 109 tourists are still missing. 1000 Europeans missing, 12 dead after Nepal quake:Friday 1 May 2015. Some people are still missing after an earthquake hit Nepal. 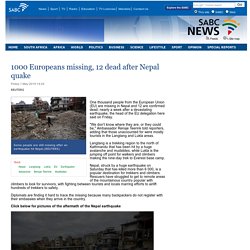 (REUTERS) One thousand people from the European Union (EU) are missing in Nepal and 12 are confirmed dead, nearly a week after a devastating earthquake, the head of the EU delegation here said on Friday. "We don't know where they are, or they could be," Ambassador Rensje Teerink told reporters, adding that those unaccounted for were mostly tourists in the Langtang and Lukla areas. Langtang is a trekking region to the north of Kathmandu that has been hit by a huge avalanche and mudslides, while Lukla is the jumping off point for walkers and climbers making the nine-day trek to Everest base camp.

Slow clean-up, aid stirs anger in quake-hit Nepal:Monday 27 April 2015. Key highways have been blocked by landslides, and many villages and communities are without water and electricity, surviving on salvaged food and with no outside help. 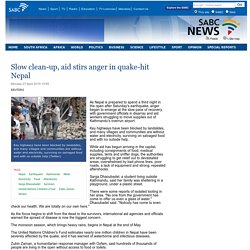 (Twitter) As Nepal is prepared to spend a third night in the open after Saturday's earthquake, anger began to emerge at the slow pace of recovery, with government officials in disarray and aid workers struggling to move supplies out of Kathmandu's overrun airport. Key highways have been blocked by landslides, and many villages and communities are without water and electricity, surviving on salvaged food and with no outside help. While aid has begun arriving in the capital, including consignments of food, medical supplies, tents and sniffer dogs, the authorities are struggling to get relief out to devastated areas, overwhelmed by bad phone lines, poor roads, a lack of equipment and strong, repeated aftershocks. There were some reports of isolated looting in her area. 17 Bodies recovered at Everest Base camp :Sunday 26 April 2015.

The earthquake in Nepal triggered an avalanche which swept down Everest, burying part of the base camp. 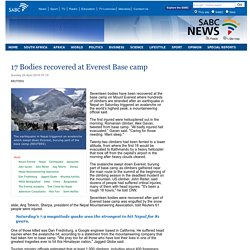 (REUTERS) Seventeen bodies have been recovered at the base camp on Mount Everest where hundreds of climbers are stranded after an earthquake in Nepal on Saturday triggered an avalanche on the world's highest peak, a mountaineering official said. The first injured were helicoptered out in the morning, Romanian climber, Alex Gavan, tweeted from base camp. "All badly injured heli evacuated," Gavan said. 7.9 Magnitude earthquake struck Nepal on Saturday:Saturday 25 April 2015. At least two people have been killed in the eTremors were felt as far away as New Delhi and other northern cities in India, with reports of tremors lasting almost one minute. 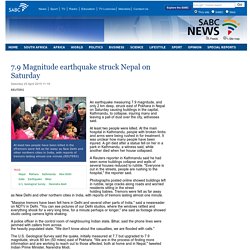 A UNICEF-European Union partnership to provide relief aid to Nepal. Quake victims continue to be pulled from ruined buildings in Nepal. Challenges faced by the Gift of the Givers in Nepal. Nepal Earthquake survivors recount their ordeal.