Nepal facing ‘human catastrophe’ similar to India’s amid Covid surge. Nepal is struggling to contain an explosion in Covid-19 cases, as fears grow that the situation in the Himalayan country may be as bad, if not worse, than in neighbouring India, with which it shares a long and porous border. 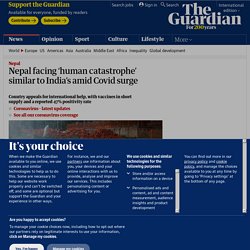 Following warnings by health officials earlier this week that the country was on the brink of losing control of its outbreak, Nepal has appealed for urgent international help. As the country reported its highest daily number of new infections – 9,070 – the prime minister, KP Sharma Oli, who has been criticised for his handling of the crisis, asked the army to help manage emergency facilities to take pressure off the health system. With vaccines running short and hospitals overwhelmed, serious outbreaks have hit both the capital, Kathmandu, and the south-west and west of the country. The national positivity rate – the percentage of tests that come back positive – is being reported at a staggering 47%.

Rates are even higher in some locations. Nepal’s Internal Political Feud During Inconsistent Global Order. Introduction Jake Sullivan the National Security Advisor of the US on 4th Feb stressed the fact that the relationship between China and the US will define the twenty-first century. 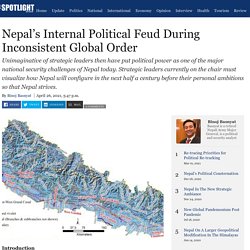 Secretary of State Antony Blinken indicted Beijing on human rights interruption in Xinjiang, Hong Kong and of various cybercrimes. China retorted by telling the US as an enormous human rights violator. Re-tracing Priorities for Political Re-tracking. As the country attempts a “re-track” onto functional state building, it is important to reinstate national priorities and revisit the vision of political order and state capacity. 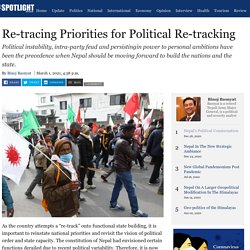 The constitution of Nepal had envisioned certain functions derailed due to recent political variability. Therefore, it is now time to ask political and institutional leaders to remember their envisioned roles and responsibilities, and tame monopoly of their power. The future of stability is, moving ahead with three things that are important to re-consider: National order and state building, strengthening national and federal institutions and an applicable election.

National Order and State Building. A state of permanent revolution. My first ‘political’ memory is a bit hazy. 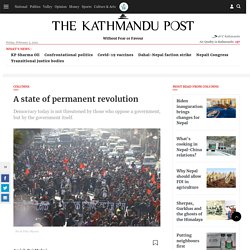 I remember a mashal julus going past our home in Pokhara during the 1990 revolution. There would have been slogans, I am sure. A blueprint for consolidating power: China exports Xi Jinping Thought to Nepal. China’s President Xi Jinping may be visiting Nepal next month, but his doctrine, widely known as Xi Jinping Thought, arrived a month earlier in Kathmandu, bundled as a two-day symposium for top leaders of the ruling party. 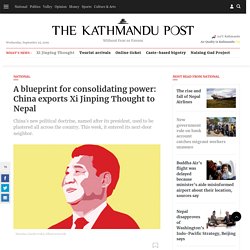 While the Nepal Communist Party has maintained that it wants to learn from China’s ruling party—particularly on functioning and discipline—the participation of around 200 leaders, including the party’s top brass and scores of Chinese officials, shows that there is more to this symposium than meets the eye. Own worst enemy. The Nepal Communist Party does not need enemies. 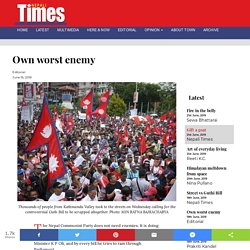 It is doing its best to undermine itself. It is squandering its two-thirds mandate with every act of omission, every speech by Prime Minister K P Oli, and by every bill he tries to ram through Parliament. The hubris comes out of its mistaken belief that a majority government can get away with anything. Own worst enemy. Culture Revolution.

There are more than 2,000 guthi all over Nepal, and they collectively own nearly 150,000 hectares of prime real estate. 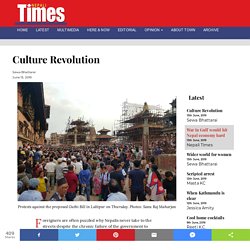 The management of such entities is traditionally passed down from one generation to the next. The Guthi Bill would create a central government authority to manage community trusts all over the country. It would have more executive powers than Guthi Sansthan, the current body that oversees trusts. The Record - How the Maoist strife has reignited in Nepal, explained. On the afternoon of May 26, Kathmandu was shaken with blasts that killed four cadres of the Nepal Communist Party headed by Netra Bikram Chand “Biplab”. 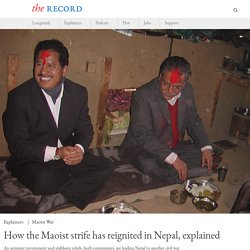 Prajwal Shahi, 26, of Bajhang district died in an explosion in Ghattekulo, one and a half kilometers away from the northern gate of Singha Durbar, the country’s main administrative center. Dipen BK, 28, and Nirantar Malla of Kalikot district and Gokul Rana Magar, 32, of Dang district, died in Sukedhara, near the party’s head-quarter. What does Narendra Modi’s landslide win mean for Nepal? May 23, 2019- With the reelection of the Bharatiya Janata Party and Prime Minister Narendra Modi in neighbouring India, Kathmandu’s diplomatic and political circles are certain to spend the coming weeks parsing what this could mean for Nepal. 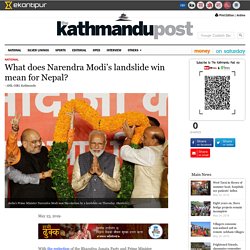 Discourse in Kathmandu is likely to centre on the future of Nepal-India ties, India’s neighbourhood policy, and Kathmandu’s attempts at striking a geopolitical balance, especially given increasing major power maneuvers in the region, according to foreign affairs experts and former diplomats. Hours before final elections results were announced, Prime Minister KP Sharma Oli telephoned Modi to congratulate him, exchanging views on strengthening Nepal-India relations, and expressing his readiness to work closely together. It’s a rich man’s world. Nepal’s Maoists fought a decade-long war for equality and inclusion. 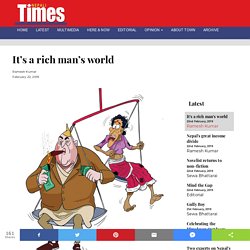 They have been in power off and on for the past 13 years after the conflict ended. But a report released last month shows that Nepal’s wealth gap is wider than ever. Municipalities want to manage Annapurna. Fixing what ain’t broke. Who now owns Nepal’s forests? Some forestry experts believe not enough was done to train local communities in the scientific management of trees to prevent degradation and fires, and picking suitable tree species. “We focused solely on preservation, and as a result forest coverage increased without contributing to the economy,” says Krishna Acharya, joint secretary at the Ministry of Forests and Environment. “Our next step should be to see how natural resources can yield economic benefit for local communities.” The Kathmandu Post -The reluctant federalist. Dec 7, 2018- The Record - Press Council colludes with the government to subvert free press. By any standard, it was a story that any editor would have loved to run. Khojtalas, a Nepali language daily newspaper based in Kathmandu, ran a front page story on July 27 with a headline: NCP leaders’ vulture’s eyes on Harisiddhi land, minister’s nephew threatens to transfer land revenue’s staffs.

Once the story came out, Raju Basnet, the editor and publisher of the paper, and his family members were followed by unknown men. He claims that his phone calls, messages and daily movement were tracked. Police arrested him from his home at Thencho in Lalitpur on July 29. The police did so without an arrest warrant. Calendar of economic change. Excerpts from an interview with Finance Minister Yuba Raj Khatiwada on Tuesday in which he played down rifts with Western donor agencies, or that Nepal did not want assistance for ‘soft’ sectors like human rights and democracy. Nepali Times: It has been seven months since you became Finance Minister, what are your tangible achievements so far? Yuba Raj Khatiwada: If you ask me how many more kilometers of road or railway lines have been laid or how much more electricity has been added to the national grid, we cannot claim to have achieved much. CORROSIVE CONDUCT. The survivors often lose their sight and are maimed because the acid burns through the skin down to the bone.

They suffer months of excruciating pain even if they do not survive, like Samjhana Das, who died on Monday two weeks after an acid attack. Her 15-year-old younger sister, Sushmita Das, was also injured. A neighbour, Rambabu Paswan, has confessed he used acid on them because Samjhana had rejected him. Inventing a new enemy. Politicians around the world need an enemy — real or fake. And if they do not have a foe, they will create one. After overthrowing an unpopular king and making peace with an India that it demonised, the Nepal Communist Party (NCP) seems to have found a new enemy: Westerners, particularly the Europeans.

Western aid agencies, experts and researchers have contributed immensely to Nepal’s development over the last half century. They worked with Nepali partners to eradicate malaria in the Tarai, build highways, support community forestry, connect mountain communities by building suspension bridges, promote tourism, and won the hearts and minds of many. Gagging the press in installments. It has only been two weeks since Nepal’s new Penal Code criminalised photography (Section 295), slapped heavy fines and jail terms for recording conversations (Section 293), and announced strict punishment for sending, receiving or using online data (Section 298). Another privacy-related bill in Parliament will prohibit people from publishing personal information of public officials.

How they kept Nepal in the dark ages. Kafle learnt the trick from his predecessors when the nexus evolved in 2006 while Arjun Karki was NEA chief and Sher Singh Bhat headed the Load Dispatch Centre. Karki and Singh forced Nepalis to bear up to 17 hours of power outage daily in winter, while supplying 24-hour power to influential business groups. In January 2013, the NEA Board of Directors ordered that dedicated feeders be disconnected. But that decision was reversed when Rameswor Yadav became the NEA’s new MD. That year, a probe panel led by Shyam Sundar Shrestha, Deputy Director General of Electricity Development Department, concluded that the NEA was ‘arbitrarily’ supplying uninterrupted electricity to industrial plants operated by powerful businesses.

Hunger for justice. Shape of things to come. Pro-women. Elections and everyday democracy. Free and fair elections act as the ultimate benchmark in assessing whether a society is democratic or not. The Jasmine Revolution. The Record - How Quotas Provided a Footing but Left Inequality Unresolved: Dalits in the Local Election. Bedfellows. The Record - Why victims of Nepal’s civil war may not get justice. Civil society to the fray.

Revolution through devolution. Electing for a better future. Nepal election: The women who want to bring change. How Nepal got the electricity flowing. The power of one. Kakistocracy. Package deal. The lonely struggle against tyranny. Nepal: The Maoist Dream. The Madhes message. A Maoist’s Burden in Nepal. Party time. Justice in transition. Not a yes-man. Stuck with these three. Crazy politics. International community concerned about 9-point pact. Journalist arrested in Nepal while covering protest. An Activist In Nepal Walked Across The Country And Decided To Throw Paint On The Prime Minister's House - BuzzFeed News. WAGES OF SIN. Kakistocracy. Nepal’s Destructive Politics. Deporting @robpenner.

Meaning of CIAA verdict. Lenin Sues Maoists, Gov’t & UN. The Year of Living Off-Balance. “How many times do we need to share our story?” Welcome to the Time Warp. In between disasters. Ex-PM Koirala passes away. Ex-PM, Nepali Congress President Sushil Koirala passes away. What was it all for? Don’t repeat past mistakes, PM tells EPG. Nepal slips 4 position down in global corruption index. Meet One of Nepal’s Charming Visionaries – The Other Nepal. Wasted. Rivalry in Madhes. Same old paradigm. Year on year.

New Constitution 2015. May the force be with you. There is Poor Representation…and Then There is Nepal. Bidhya Devi Bhandari elected Nepal's first female president - BBC News. Betrayal of the knowledgeable. MAIL TODAY COMMENT: Normalising ties with Nepal. UDMF to support Koirala in PM election, not to join govt though - The Himalayan Times. Oli reminds Nepali Congress of past agreement, urges Koirala to withdraw candidacy - The Himalayan Times.