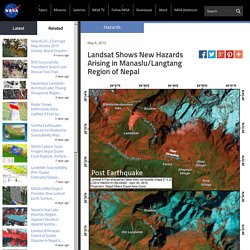 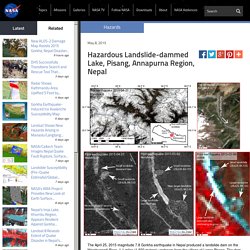 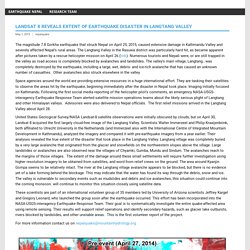 The Langtang Valley in the Rasuwa district was particularly hard hit, as became apparent after pictures taken by a rescue helicopter mission on April 26 (link). Numerous tourists and Nepali were, or are still trapped in the valley as road access is completely blocked by avalanches and landslides. The valley’s main village, Langtang , was completely destroyed by the earthquake, including a large, wet, debris- and ice-rich avalanche that has caused an unknown number of casualties. Other avalanches also struck elsewhere in the valley. Space agencies around the world are providing extensive resources in a huge international effort. International efforts to identify post-quake hazards. In response to the magnitude 7.8 earthquake that struck Nepal on 25 April 2015, the International Centre for Integrated Mountain Development (ICIMOD), National Aerospace and Space Administration (NASA), the University of Arizona, and their collaborators have coordinated an international volunteer team to map and assess hazards created by landslides, rockfalls, and avalanches. 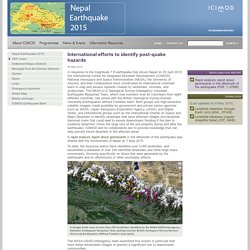 The NASA-U.S.Geological Survey-Interagency Volunteer Earthquake Response Team, which now numbers over 40 volunteers from eight different countries, has joined with the British Geological Survey-Durham University-Earthquakes without Frontiers team. A rapid analysis report about geohazards in the aftermath of the earthquake was shared with the Government of Nepal on 7 May 2015. Superadobe/Earthbag Orphanage Withstands Nepal Earthquake. Hesperia, Calif., May 5, 2015 -- Cal-Earth Institute today announced they received confirmation that the Superadobe/Earthbag orphanage project built for the Pegasus Children’s Project in the northern Khathmandu valley in Nepal survived the 7.6 magnitude earthquake on 25 April 2015, and the structures are all still standing. 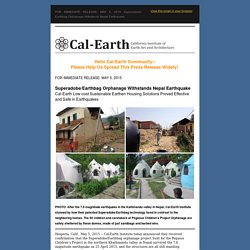 The Superadobe (sandbags/barbed wire) building system developed at Cal-Earth (U.S. Patent #5,934,027) integrates traditional earth architecture with contemporary global safety requirements, and passes severe earthquake code tests in California. The technology has been published by NASA, endorsed by the United Nations, featured in countless world media outlets, and awarded the prestigious Aga Khan Award for Architecture in 2004. A UK organization, Small Earth, built over 40 domes in 2006 for the Pegasus Children’s Project in Nepal, which is home to over 90 children and their caretakers, all of who are confirmed safe after the earthquake.

Next Generation Nepal - Donate Online. The tragic earthquake in Nepal has left thousands of children wandering the streets without food, water and shelter. 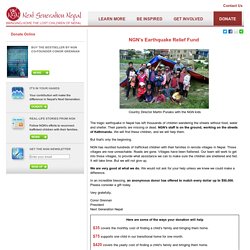 Their parents are missing or dead. NGN's staff is on the ground, working on the streets of Kathmandu. We will find these children, and we will help them. But that's only the beginning. Nepal earthquake emergency response. Expert medical and non-medical expert teams are assisting victims of the Nepal Earthquake, which shook the Kathmandu Valley before noon on Saturday 25 April. 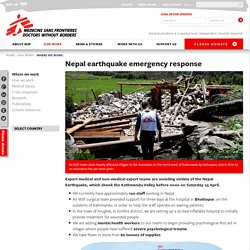 We currently have approximately 120 staff working in Nepal.An MSF surgical team provided support for three days at the hospital in Bhaktapur, on the outskirts of Kathmandu, in order to help the staff operate on waiting patients.In the town of Arughat, in Gorkha district, we are setting up a 20-bed inflatable hospital to initially provide treatment for wounded people.We are adding mental health workers to our teams to begin providing psychological first aid in villages where people have suffered severe psychological trauma.We have flown in more than 80 tonnes of supplies.

Disaster Relief Tourism : How To Help - It's One World...Travel. If you’ve been heartbroken by the recent tragedy in Nepal, you’re not alone. 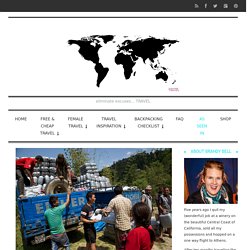 Claire Bennett put together a great article you need to read before you go to Nepal. This is one time that money can buy something of value. Nepals 2015 Earthquake, lest we forget – how to help. Today there is aid and shelter. 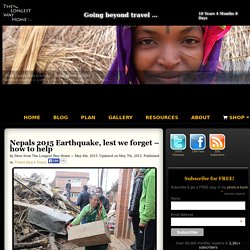 But what will this woman do in 6 months? The killer earthquake that hit Nepal is still causing damage Yes, the title is correct. On April 25th 2015 Nepal was struck with a 7.8 earthquake that has so far killed 8,000 people with a final number expected to be over 10,000. To give this some scale, 8.1 million people were directly affected – just under one-third of the population. This tiny country that is home to the world’s tallest mountain and some of the friendliest people on earth has been devastated.

2 million people set to die in Nepal... - Humans Of Our World - Nepal Edition. NASA Device Finds 4 Buried Victims in Nepal by Detecting Heartbeats - Good News Network. I was reading through all the negativity and stupidity this morning while drinking my coffee and something said, ‘how about some good news?’ 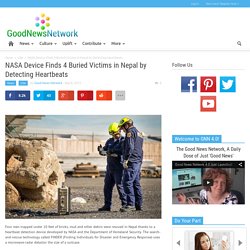 , so I typed in GOOD NEWS and found your site… Ahhh! John Longo Oh my, you’ve made my day! I can’t tell you completely how happy you’ve made me. - Dany Thank you for writing your newsletter, Some Good News! - former Sec. of State Colin Powell Your daily stories have allowed me to rekindle a certain appreciate for the good things in life. . - Trey Aubrey I think there needs to be a change of consciousness with the news ... to try to seek a higher ground. . - Oprah Winfrey When I read the newspaper, I look for the good news because every thought we think changes our biochemistry.