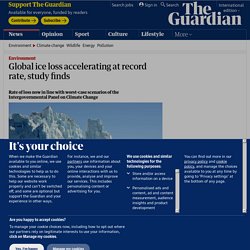 The rate of loss is now in line with the worst-case scenarios of the Intergovernmental Panel on Climate Change, the world’s leading authority on the climate, according to a paper published on Monday in the journal The Cryosphere. Thomas Slater, lead author and research fellow at the centre for polar observation and modelling at the University of Leeds, warned that the consequences would be felt around the world. “Sea level rise on this scale will have very serious impacts on coastal communities this century,” he said. India to fell ancient forest for new coalfields.

Over the past decade, Umeshwar Singh Amra has witnessed his homeland descend into a battleground. 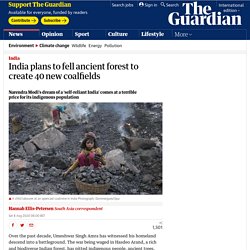 The war being waged in Hasdeo Arand, a rich and biodiverse Indian forest, has pitted indigenous people, ancient trees, elephants and sloths against the might of bulldozers, trucks and hydraulic jacks, fighting with a single purpose: the extraction of coal. Yet under a new “self-reliant India” plan by the prime minister, Narendra Modi, to boost the economy post-Covid-19 and reduce costly imports, 40 new coalfields in some of India’s most ecologically sensitive forests are to be opened up for commercial mining. Among them are four huge blocks of Hasdeo Arand’s 420,000 acres of forest in the central Indian state of Chhattisgarh, which sit above an estimated 5bn tonnes of coal. It marks a significant shift.

Arctic sea ice not yet freezing. For the first time since records began, the main nursery of Arctic sea ice in Siberia has yet to start freezing in late October. 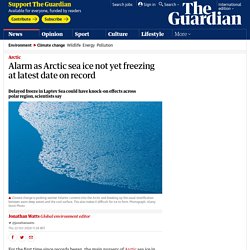 The delayed annual freeze in the Laptev Sea has been caused by freakishly protracted warmth in northern Russia and the intrusion of Atlantic waters, say climate scientists who warn of possible knock-on effects across the polar region. Carbon electricity. Carbon emissions from the global electricity system fell by 2% last year, the biggest drop in almost 30 years, as countries began to turn their backs on coal-fired power plants. 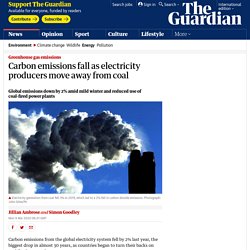 A new report on the world’s electricity generation revealed the steepest cut in carbon emissions since 1990 as the US and the EU turned to cleaner energy sources. Overall, power from coal plants fell by 3% last year, even as China’s reliance on coal plants climbed for another year to make up half the world’s coal generation for the first time. Bumblebees decline to mass extinction. Bumblebees are in drastic decline across Europe and North America owing to hotter and more frequent extremes in temperatures, scientists say. 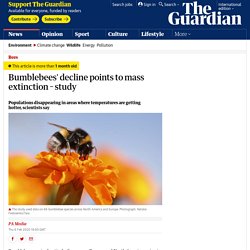 A study suggests the likelihood of a bumblebee population surviving in any given place has declined by 30% in the course of a single human generation. Trump rolls back methane climate standards. The Trump administration is revoking rules that require oil and gas drillers to detect and fix leaks of methane, a greenhouse gas that heats the planet far faster than carbon dioxide. 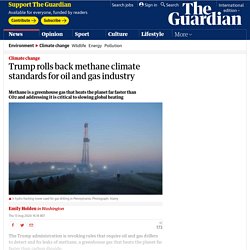 Methane has a much more potent short-term warming effect than CO2 and addressing it is critical to slowing global heating as the world is already on track to become more than 3C hotter than before industrialization. It’s important to say this is not a step towards a paywall We need more readers to register with us to help sustain our independent, quality journalism.

Without you taking this simple step, we miss out on revenues from personalised advertising - a critical source of funding for our future. First active leak of sea-bed methane. The first active leak of methane from the sea floor in Antarctica has been revealed by scientists. 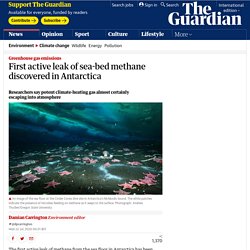 The researchers also found microbes that normally consume the potent greenhouse gas before it reaches the atmosphere had only arrived in small numbers after five years, allowing the gas to escape. Vast quantities of methane are thought to be stored under the sea floor around Antarctica. One billion people will live in insufferable heat. The human cost of the climate crisis will hit harder, wider and sooner than previously believed, according to a study that shows a billion people will either be displaced or forced to endure insufferable heat for every additional 1C rise in the global temperature. 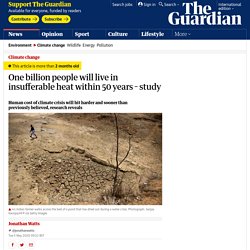 In a worst-case scenario of accelerating emissions, areas currently home to a third of the world’s population will be as hot as the hottest parts of the Sahara within 50 years, the paper warns. Even in the most optimistic outlook, 1.2 billion people will fall outside the comfortable “climate niche” in which humans have thrived for at least 6,000 years. World’s consumption of materials hits record. The amount of material consumed by humanity has passed 100bn tonnes every year, a report has revealed, but the proportion being recycled is falling. 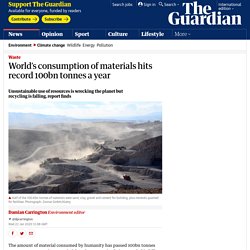 The climate and wildlife emergencies are driven by the unsustainable extraction of fossil fuels, metals, building materials and trees. The report’s authors warn that treating the world’s resources as limitless is leading towards global disaster. Weakened green laws after BP lobbying. BP has successfully lobbied US policymakers to weaken a landmark environmental law, clearing the way for major infrastructure projects to bypass checks. 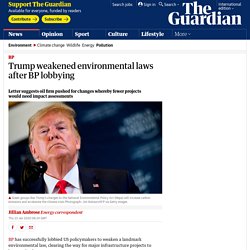 US government documents show BP America lobbied in favour of Donald Trump’s decision to dilute legislation, which could make it easier for new projects, such as oil pipelines and power plants, to move forward with far less federal review of their impact on the environment. Many green groups fear the changes to the 50-year-old National Environmental Policy Act (Nepa) will increase greenhouse gas emissions and accelerate the climate crisis. The changes, unveiled by Trump this month, would narrow the list of projects that require an environmental impact assessment and in some cases eliminate the need for federal agencies to consider the cumulative effects of projects, including the impact on the climate crisis. Mel Evans, a campaigner at Greenpeace UK, said BP’s support for weakening environmental checks was “despicable, but not surprising”. Two weeks in apocalyptic australia. In Australia this summer, talking about the weather inevitably leads to talking about the apocalypse.

“When’s the plague of locusts going to arrive?” Jokes one Sydney resident after hearing reports that her city is to receive another storm of giant hailstones on Friday afternoon, just a day after it sweltered in temperatures of 40C and toxic smoke kept people stuck indoors, away from the respite of the beach. A barista serving coffees to customers outside his cafe sees the spots of ash rain peppering their skin like freckles. Oceans temperatures hit record high. The heat in the world’s oceans reached a new record level in 2019, showing “irrefutable and accelerating” heating of the planet. The world’s oceans are the clearest measure of the climate emergency because they absorb more than 90% of the heat trapped by the greenhouse gases emitted by fossil fuel burning, forest destruction and other human activities. The new analysis shows the past five years are the top five warmest years recorded in the ocean and the past 10 years are also the top 10 years on record.

The amount of heat being added to the oceans is equivalent to every person on the planet running 100 microwave ovens all day and all night. 1 billion animals dead in australian fires. As fires continue to rip through Australia, some devastating numbers are emerging: At least 24 people killed. More than 15.6 million acres torched. Over 1,400 homes destroyed. And, according to one biodiversity expert’s count, an estimated 1 billion animals killed. That last number is staggeringly huge, and has begun to make the rounds on social media. You might be wondering: How are so many animals dying? The bushfires, exacerbated by climate change, have since September swept through vast swathes of Australia — we’re talking about an area bigger than Vermont and New Hampshire combined — affecting a mix of rural and suburban areas. Many wild animals and some farm animals have been killed directly by the flames.

Other animals have not been burned alive but have faced death due to the destruction of their natural environment, which they rely on for food and shelter. Some experts suggested that estimate was too high. Oceans losing oxygen at unprecedented rate. Oxygen in the oceans is being lost at an unprecedented rate, with “dead zones” proliferating and hundreds more areas showing oxygen dangerously depleted, as a result of the climate emergency and intensive farming, experts have warned. Sharks, tuna, marlin and other large fish species were at particular risk, scientists said, with many vital ecosystems in danger of collapse. Dead zones – where oxygen is effectively absent – have quadrupled in extent in the last half-century, and there are also at least 700 areas where oxygen is at dangerously low levels, up from 45 when research was undertaken in the 1960s. 1.9 billion people at risk from mountain water shortages. A quarter of the world’s population are at risk of water supply problems as mountain glaciers, snow-packs and alpine lakes are run down by global heating and rising demand, according to an international study.

The first inventory of high-altitude sources finds the Indus is the most important and vulnerable “water tower” due to run-off from the Karakoram, Hindu Kush, Ladakh, and Himalayan mountain ranges, which flow downstream to a densely populated and intensively irrigated basin in Pakistan, India, China and Afghanistan. The authors warn this vast water tower – a term they use to describe the role of water storage and supply that mountain ranges play to sustain environmental and human water demands downstream – is unlikely to sustain growing pressure by the middle of the century when temperatures are projected to rise by 1.9C (35.4F), rainfall to increase by less than 2%, but the population to grow by 50% and generate eight times more GDP.

Vital signs. Plummeting insect numbers. Worrying rise in global co2. Humanity wiped out 60% of animals. Bolsonaro spells catastrophe for the amazon. Far-right congressman Jair Bolsonaro, whose hostile campaign rhetoric has earned him comparisons to U.S. EPA wants to weaken mercury rules. Nicolas hulot démissionne. Jet stream fires. Collapse of civilisation. Domino hothouse. A domino-like cascade of melting ice, warming seas, shifting currents and dying forests could tilt the Earth into a “hothouse” state beyond which human efforts to reduce emissions will be increasingly futile, a group of leading climate scientists has warned. Tribute to Saw O Moo. Indigenous activists in Myanmar’s Karen state are mourning the killing of a community leader who campaigned for a peace park to protect a local forest and its residents’ land rights.

Saw O Moo was ambushed by government troops on 5 April as he was riding a motorbike with a soldier from the Karen National Liberation Army (KNLA), a rebel group that is fighting for autonomy. Uninhabitable earth. Billionaire survival guide. Narrower range of outcome. Earth’s surface will almost certainly not warm up four or five degrees Celsius by 2100, according to a study which, if correct, voids worst-case UN climate change predictions. Climate loop. For decades, scientists have warned that climate change would make extreme events like droughts, floods, hurricanes, and wildfires more frequent, more devastating, or both.