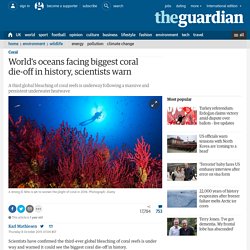 The Great Barrier Reef has been brutally bleached for the second year in a row. Contrary to what you may have heard, the reef isn’t dead — not yet. 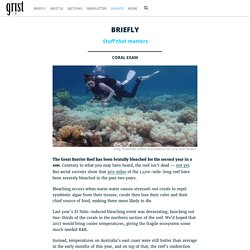 But aerial surveys show that 900 miles of the 1,400-mile-long reef have been severely bleached in the past two years. Bleaching occurs when warm water causes stressed-out corals to expel symbiotic algae from their tissues; corals then lose their color and their chief source of food, making them more likely to die. Last year’s El Niño–induced bleaching event was devastating, knocking out two-thirds of the corals in the northern section of the reef. Think you’ve had it rough this past year? You should hear what the Great Barrier Reef is dealing with. According to the cover article in today’s issue of the journal Nature, the iconic reef off the coast of Australia suffered unprecedented coral die-off after last year’s record-breaking bleaching event. 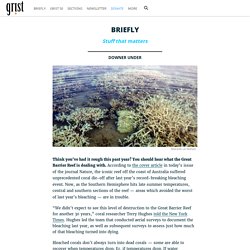 Now, as the Southern Hemisphere hits late summer temperatures, central and southern sections of the reef — areas which avoided the worst of last year’s bleaching — are in trouble. “We didn’t expect to see this level of destruction to the Great Barrier Reef for another 30 years,” coral researcher Terry Hughes told the New York Times. Hughes led the team that conducted aerial surveys to document the bleaching last year, as well as subsequent surveys to assess just how much of that bleaching turned into dying. Oceans are about to turn into a frothing cauldron of death. 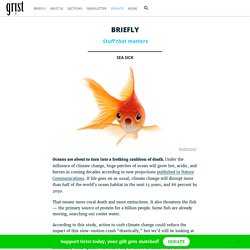 For nearly 25 years, he advocated for poor and minority neighborhoods stricken by pollution. As a senior adviser and assistant associate administrator, Ali served under both Democratic and Republican presidents — but not under President Donald Trump. His departure comes amid news that the Trump administration plans to scrap the agency’s environmental justice work. Acidification des océans : cartographie d'un phénomène 10 fois plus rapide qu'il y a 56 millions d'années. 18 510 lectures / 16 commentaires18 novembre 2014 ; révision : 16 juin 2015, 13 h 51. 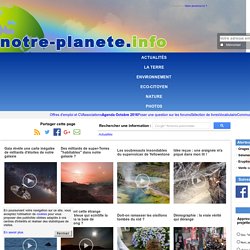 Dungeness crabs threatened by, you guessed it, climate change. When it comes to American culinary institutions, the Dungeness crabs that are hauled ashore from California to Washington state every winter season are the crustacean equivalents of apple pie. 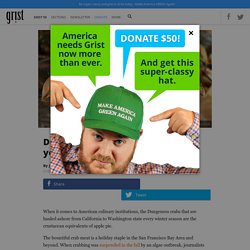 The bountiful crab meat is a holiday staple in the San Francisco Bay Area and beyond. When crabbing was suspended in the fall by an algae outbreak, journalists flocked to docks to produce lead news stories — just as they did when crabbing was restricted following a 2007 oil spill. Research published this month could give a crab connoisseur a case of acid reflux.

Scientists reported in the journal Marine Biology that ocean acidification, which is caused when carbon dioxide pollution dissolves into oceans, can kill and stunt young crabs, potentially jeopardizing whole populations. Page 7 of The Point of No Return: Climate Change Nightmares Are Already Here. Historians may look to 2015 as the year when shit really started hitting the fan. Some snapshots: In just the past few months, record-setting heat waves in Pakistan and India each killed more than 1,000 people. In Washington state's Olympic National Park, the rainforest caught fire for the first time in living memory. London reached 98 degrees Fahrenheit during the hottest July day ever recorded in the U.K.; The Guardian briefly had to pause its live blog of the heat wave because its computer servers overheated.

Will EPA Heed the Pope's Call to Save Our Oceans? When it comes to saving our oceans, I'm wondering: What would Pope Francis do? 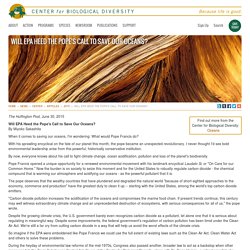 With his sprawling encyclical on the fate of our planet this month, the pope became an unexpected revolutionary. I never thought I'd see bold environmental leadership arise from this powerful, historically conservative institution. By now, everyone knows about his call to fight climate change, ocean acidification, pollution and loss of the planet's biodiversity. J-P Gattuso : "L'acidité de l'océan pourrait tripler d'ici 2100" Watch us explain ocean acidification with a soda maker. Now we can watch the oceans acidify in real time. How will ocean acidification impact marine life? Many marine organisms—such as coral, clams, mussels, sea urchins, barnacles, and certain microscopic plankton—rely on equilibrated chemical conditions and pH levels in the ocean to build their calcium-based shells and other structures. 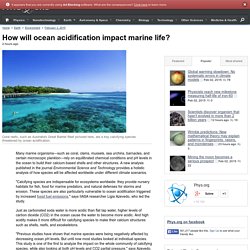 Ocean acidification slurps up oysters. Editor’s note: We’re publishing a series from The Story Group that shows Americans on the front lines of climate change. 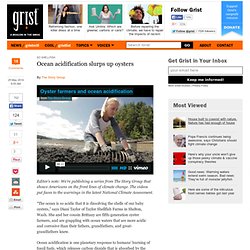 The videos put faces to the warnings in the latest National Climate Assessment. “The ocean is so acidic that it is dissolving the shells of our baby oysters,” says Diani Taylor of Taylor Shellfish Farms in Shelton, Wash. She and her cousin Brittany are fifth-generation oyster farmers, and are grappling with ocean waters that are more acidic and corrosive than their fathers, grandfathers, and great-grandfathers knew. Ocean acidification is one planetary response to humans’ burning of fossil fuels, which releases carbon dioxide that is absorbed by the oceans. According to the National Climate Assessment, oceans currently absorb about a quarter of human-caused carbon dioxide emissions to the atmosphere, leading to ocean acidification that will alter marine ecosystems in dramatic yet uncertain ways. Arctic Species at Risk from Increasing Ocean Acidity from Rising Carbon Dioxide.

First Posted: Dec 03, 2013 08:41 AM EST Cyclones can whip up water and wind, creating conditions that can impact local climate and conditions. 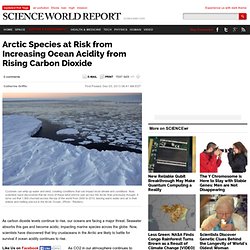 'Super corals' offer hope as oceans turn acidic. Corals began building reefs at least 200 million years ago, predating humans by at least 199.8 million years. They're literally pillars of their communities, supporting major ecosystems and economies all around the planet. But while natural selection has gotten them this far, the sudden danger of manmade climate change — particularly ocean acidification — may soon require an extra boost from "human-assisted evolution.

" People have a long history of selectively breeding plants and animals to feed or befriend us, and a pair of researchers from the U.S. and Australia thinks we might save coral reefs if we can breed them to withstand us. » 1356 Climat (21) : Conséquences (3) – Les Océans. What is Ocean Acidification? Our continued burning of fossil fuels is increasing the levels of carbon dioxide in the atmosphere.