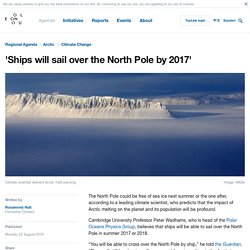 Cambridge University Professor Peter Wadhams, who is head of the Polar Oceans Physics Group, believes that ships will be able to sail over the North Pole in summer 2017 or 2018. Time to listen to the ice scientists about the Arctic death spiral. Ice scientists are mostly cheerful and pragmatic. 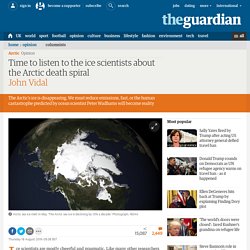 Like many other researchers coolly observing the rapid warming of the world, they share a gallows humour and are cautious about entering the political fray. Not Peter Wadhams. See Before-and-After Photos of the Changing Environment. Side-by-side comparisons reveal just how much glaciers, lakes, and snowpacks have been altered by nature and humans. 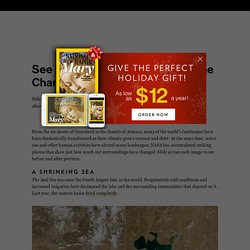 From the ice sheets of Greenland to the deserts of Arizona, many of the world’s landscapes have been dramatically transformed as their climate grows warmer and drier. At the same time, water use and other human activities have altered many landscapes. NASA has accumulated striking photos that show just how much our surroundings have changed. Slide across each image to see before and after pictures. July 2016 Was The Hottest Month Ever Recorded. World's leading sea ice expert warns the "Arctic death spiral" will make global warming even worse. The terrifyingly ominous phrase “Arctic death spiral” refers to a chart that measures the continual melt laying waste to the ice in the Arctic Circle over the last 30 years. 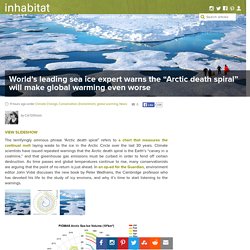 Climate scientists have issued repeated warnings that the Arctic death spiral is the Earth’s “canary in a coalmine,” and that greenhouse gas emissions must be curbed in order to fend off certain destruction. As time passes and global temperatures continue to rise, many conservationists are arguing that the point of no return is just ahead. World's hottest month shows challenges global warming will bring. In Siberia, melting permafrost released anthrax that had been frozen in a reindeer carcass for decades, starting a deadly outbreak. 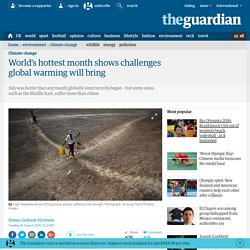 In Baghdad, soaring temperatures forced the government to shut down for days at a time. In Kuwait, thermometers hit a record 54C (129F). July was the hottest month the world has endured since records began in 1880, scientists have said, and brought a painful taste of the troubles people around the world may have to grapple with as global warming intensifies. Results compiled by Nasa showed the month was 0.84C hotter than the 1951-1980 average for July, and 0.11C hotter than the previous record set in July 2015. Glaciers in the Alps - before and after. Move the slider left and right to see how major glaciers in the Alps have dramatically changed over the past century. 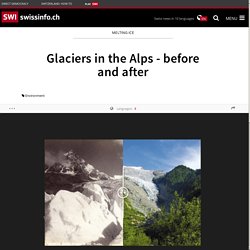 Images are taken from the book "Glaciers. Passé-présent du Rhône au Mont-Blanc" (Glaciers: Past-present from the Rhône to Mont Blanc) Editions Slatkine, (2010). (Photos: Amédée Zryd, Hilaire Dumoulin, Nicolas Crispini) Ice cap that once covered Brrr-itain was half a mile thick. Unity WebGL Player. Interactive: See How Much States Have Warmed Since the First Earth Day. Since the first Earth Day was celebrated 46 years ago, average temperatures across the U.S. have been steadily rising. 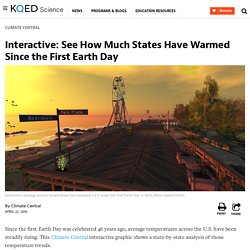 This Climate Central interactive graphic shows a state-by-state analysis of those temperature trends. Across most of the country, average temperatures have increased at a rate of about 0.13°F (0.07°C) per decade since 1910. That trend is in line with the broader trend of rising global temperatures fueled by the accumulation of heat-trapping greenhouse gases in the Earth’s atmosphere. Of course warming isn’t uniform across the planet, and some regions are warming faster than others. And since the 1970s, warming across the U.S. has accelerated.

The fastest-warming states over that period were New Mexico, Arizona and Delaware, which warmed at a rate of more than 0.6°F (0.3°C) per decade. The climate that most of us grew up with is gone for good. On Tuesday, two government science agencies announced that the first six months of 2016 were the warmest first half of any year on record. 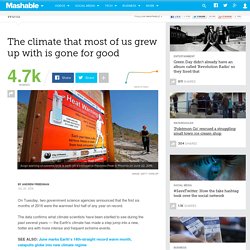 Glaciers melting in time lapse photography. "CHASING ICE" captures largest glacier calving ever filmed - OFFICIAL VIDEO. Permafrost - what is it? A Farewell to Ice by Peter Wadhams review – climate change writ large. Becoming a world authority on sea ice has taken Peter Wadhams to the polar zones more than 50 times, travelling on foot and by plane, ship, snowmobile and several nuclear-powered submarines of the Royal Navy. 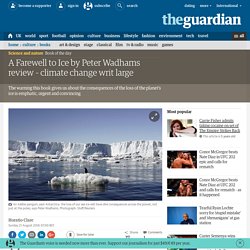 Nonscientists who read his astonishing and hair-raising A Farewell to Ice will agree that the interludes of autobiography it contains are engrossing, entertaining and, when one submarine suffers an onboard explosion and fire while under the ice, harrowing. Any reader should find the science of sea-ice creation and the implications for us all of its loss – explored and explained here with clarity and style – beautiful, compelling and terrifying. Wadhams thanks Ernest Hemingway for his title. Climate change, a cause and an effect of ice loss, brings conflict that would have interested the great author. Persecuted by trolls and climate-change deniers, Wadhams made news last year when three of his peers met premature deaths.

A Farewell to Ice proceeds methodically. This Artist Has Turned Depressing Climate Data Into Stunning Art. At first glance you might miss that these beautiful paintings actually visualise climate science data. 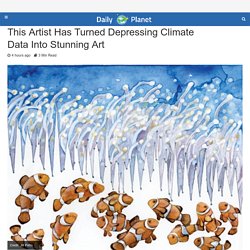 Most climate scientists focus on complex graphs and excel sheets to communicate their research, and they can be overwhelming and difficult to get your head around if math is not your thing. University of Maine student Jill Pelto, who describes herself as both a scientist and an artist, gets that. She decided to combine her skills to communicate climate science through art to reach a broader audience. Dwindling of Arctic's oldest ice since 1990. Forget the FTSE 500: the Arctic is the real barometer of global risk. Humans are naturally risk-averse. We try to avoid disaster zones, and don’t like to fly when there appear to be mechanical problems or heavy fog. However, often information about risk is incomplete, and sometimes we don’t even know the risks we’re taking until after the event.

Even for thrill-seekers, identifying and managing risk is a prudent approach. While there isn’t an official “barometer” of global risk, understanding global risk is big business, with companies such as Allianz publishing an annual global business outlook. Others look to global financial performance measures – such as the trends in the FTSE 500 or Dow Jones Index – to predict global economic resilience or vulnerability. New Antarctic ice discovery aids future climate predictions. A team of British climate scientists comparing today's environment with the warm period before the last ice age has discovered a 65% reduction of Antarctic sea ice around 128,000 years ago. The finding is an important contribution towards the challenge of making robust predictions about the Earth's future climate.

Carbon emissions 'postpone ice age'. Image copyright Ittiz The next ice age may have been delayed by over 50,000 years because of the greenhouse gases put in the atmosphere by humans, scientists in Germany say. Ed hawkins: Simulated global temperature change. This animated spiral portrays the simulated changes in the global averaged monthly air temperature from 1850 through 2100 relative to the 1850 - 1900 average. The temperature data are from Community Climate System (CCSM4) global climate model maintained by the National Center for Atmospheric Research. The simulation is for the IPCC Representative Concentration Pathway 8.5 (RCP8.5) emission scenario. RCP8.5 is the most aggressive scenario in which green house gases continue to rise unchecked through the end of the century, leading to an equivalent of about 1370 ppm CO2, which is roughly four times the concentration at present.

The CCSM4 simulation is part of the 5th Climate Model Intercomparison Program (CMIP5) and the data can be downloaded at The 21st century animations are an extension of the graphic ( for the 1850-2010 observed air temperature created by E. Hawkins at Reading University, UK. Ed hawkins: Spiralling global temperatures from 1850-2016 (full animation) Earth Temperature Timeline (very long!) August 2016 was the hottest August on record. Soaring temperatures on land and sea have pushed Earth to its hottest period in recorded history. August 2016 was the warmest August on record, and was tied with July 2016 as the hottest month ever. Data from NASA reveals August as the hottest August since record-keeping began 136 years ago.

NASA's figures, which combine sea-surface temperature and air temperature on land, also show August was the eleventh month in a row to break the monthly temperature record. Yacht sails through low-ice Arctic sea routes 2016. Image copyright POLAR OCEAN CHALLENGE. Extreme Weather Grows in Frequency and Intensity Around World. It was no anomaly: the floods of 2012 followed the floods of 2007 and also the floods of 2009, which all told have resulted in nearly $6.5 billion in insurance payouts. Was that climate change? Scientists are getting faster at linking extreme weather to warming. Is it still true to say you can’t point to any single extreme weather event and claim you can’t link it to human-caused climate change? The Arctic just had the warmest winter on record. The repercussions will be global. New Year’s Eve is a foggy memory for most of us during the summer. Thanks to global warming, an icebreaker with no ice to break.

.@SenTedCruz Another quick #MondayMorningClimateWarning sir: #climatechange is real. Surface temperature anomalies,.1880 -2015 red = higher than normal temp, blue = lower than normal temp. August 2016 was the hottest August on record. N.B. If this article sounds familiar, it should. This has been happening so frequently I just copied the post for March April May June July and updated it. Phil Plait writes Slate’s Bad Astronomy blog and is an astronomer, public speaker, science evangelizer, and author of Death From the Skies! October. November. Think It’s Hot Now? Just Wait. Far From Turning a Corner, Global CO2 Emissions Still Accelerating.

Scientists: How the new focus on 1.5C is reshaping climate research. Limiting global temperature rise to 1.5C has long been the goal of developing countries and those most at risk from climate change. Since becoming enshrined in the Paris Agreement last December, the 1.5C goal has come under increased scrutiny and examination. How do climate impacts at 1.5C and 2C compare? These Images Show Near-Record Low 2016 Arctic Sea Ice. Annual Arctic sea ice reconstruction. Climate Central Special Report. National Parks have grown up with photography. The world passes 400ppm carbon dioxide threshold. Permanently. In the centuries to come, history books will likely look back on September 2016 as a major milestone for the world’s climate. At a time when atmospheric carbon dioxide is usually at its minimum, the monthly value failed to drop below 400 parts per million (ppm). That all but ensures that 2016 will be the year that carbon dioxide officially passed the symbolic 400 ppm mark, never to return below it in our lifetimes, according to scientists.

Aquatic Plants May Accelerate Arctic Methane Emissions. Tree-rings reveal secret clocks that could reset key dates across the ancient world: Trees which grew during intense radiation bursts in the past have 'time-markers' in their tree-rings that could help archaeologists date events from thousands of years ag. Global Warming Effects Map - Effects of Global Warming. Attenborough ship to pursue climate research. 2016 locked into being hottest year on record, Nasa says. Stat of the day: 160 container ships create same pollution as all the cars in world. There are 6000 such ships at sea. Hurricane Matthew was a 1-in-1000-year disaster for North Carolina. This growing migration crisis is the canary in the mine on climate change.

Climate change rate to turn southern Spain to desert by 2100, report warns. *Climate change forecast in the past: Scientists have been forecasting that burning fossil fuels will cause climate change as early as 1882 — Quartz. Arctic Sea Ice Is Losing Its Bulwark Against Warming Summers. Hey guys, can we take a short break from Trump appointment stuff. Sea creatures are floating around Miami! Yikes!! □ 6 climate tipping points: How worried should we be? Bill McKibben (@billmckibben) A tipping point appears to have been reached. #COP22 #ClimateAction This graph is up to date as of 3 days ago at 15th November 2016! Ice-Hot News : The “Oldest Ice” quest has begun. The North Pole is an insane 36 degrees warmer than normal as winter descends. *Antarctic CO2 hit 400 ppm (incl visualisation)