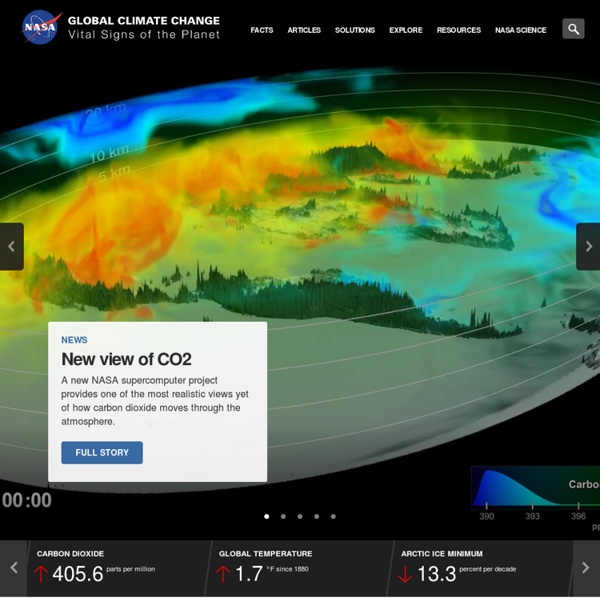 A History of Climate Science Skeptical Science takes a different approach to Naomi Oreskes' Science paper who sorted her papers into "explicit endorsement of the consensus position", "rejection of the consensus position" and everything else (neutral). In this case, the backbone of our site is our list of climate myths. Whenever a climate link is added to our database, it is matched to any relevant climate myths. Therefore, each link is assigned "skeptic", "neutral" or "proAGW" whether it confirms or refutes the climate myth.

No Place In the World Is Safe From Global Warming Scientists are simply unsure if climate change could have had anything to do with Hurricane Sandy, but there is plenty of other evidence about how global warming is changing nature as we know it and leaving no place on land or sea untouched. Scientists from Oregon State University have found that some high mountain meadows — described as “unique ecosystems that once were carpeted with grasses, shrubs and wildflowers” — in the Pacific Northwest are in rapid decline as a result of climate change. Warmer temperatures have led to reduced snowpacks and longer growing seasons that have resulted in trees invading the meadows and threatening the biodiversity of their plant, animal and insect life. The changes to the meadow ecosystem are occurring at high and low altitudes and in many areas of the American West, notes Harold Zald, a research associate in the College of Forestry at Oregon State University and lead author of this study which was published in Landscape Ecology.

climate loop For decades, scientists have warned that climate change would make extreme events like droughts, floods, hurricanes, and wildfires more frequent, more devastating, or both. In 2017, we got an up-close look at the raw ferocity of such an altered world as high-category hurricanes battered the East and Gulf coasts, and wind-whipped fires scorched the West (see “Did Climate Change Fuel California’s Devastating Fires? Probably”). We’re also seeing with greater clarity how these dangers are interlinked, building upon one another toward perilous climate tipping points. And yet for all the growing risks, and the decades we’ve had to confront them, we have yet to address the problem in a meaningful way (see “Trump’s Five Biggest Energy Blunders in 2017”). In fact, despite all our climate policies, global accords, solar advances, wind farms, hybrid cars, and Teslas, greenhouse-gas emissions are still moving in the wrong direction.

Science says: Cut that steak in half to keep the climate in check Photo by Jack Lyons. Eric Davidson has no grand plan to turn you into a vegetarian. But in order for us to avoid catastrophic climate change, this senior scientist and executive director at Woods Hole Research Center says people in developed nations may need to eat half as much meat. Yep — you heard that right. This isn’t about the way animals are treated, nor is it about reducing heart disease. For the sake of the climate alone, we — as a culture — need to eat half as many burgers, and half as much bacon.

The world passes 400ppm carbon dioxide threshold. Permanently In the centuries to come, history books will likely look back on September 2016 as a major milestone for the world’s climate. At a time when atmospheric carbon dioxide is usually at its minimum, the monthly value failed to drop below 400 parts per million (ppm). That all but ensures that 2016 will be the year that carbon dioxide officially passed the symbolic 400 ppm mark, never to return below it in our lifetimes, according to scientists. Because carbon pollution has been increasing since the start of the industrial revolution and has shown no signs of abating, it was more a question of “when” rather than “if” we would cross this threshold. The inevitability doesn’t make it any less significant, though. September is usually the month when carbon dioxide is at its lowest after a summer of plants growing and sucking it up in the northern hemisphere.

Earth Exploration Toolbook Awarded Science Magazine's Science Prize for Online Resources in Education (SPORE), September 30, 2011 AAAS Press Release What is the Earth Exploration Toolbook? Temperatures may rise 6c by 2100, says study - Climate Change - Environment It will now be almost impossible to keep the increase in global average temperatures up to 2100 within the 2C target that scientists believe might avert dangerous and unpredictable climate change, according to a study by the accountancy giant PricewaterhouseCoopers (PwC). An analysis of how fast the major world economies are reducing their emissions of carbon dioxide from fossil fuels suggests that it may already be too late to stay within the 2C target of the UN's Intergovernmental Panel on Climate Change, it found. To keep within the 2C target, the global economy would have to reach a "decarbonisation" rate of at least 5.1 per cent a year for the next 39 years.

narrower range of outcome Earth’s surface will almost certainly not warm up four or five degrees Celsius by 2100, according to a study which, if correct, voids worst-case UN climate change predictions. A revised calculation of how greenhouse gases drive up the planet’s temperature reduces the range of possible end-of-century outcomes by more than half, researchers said in the report, published in the journal Nature. “Our study all but rules out very low and very high climate sensitivities,” said lead author Peter Cox, a professor at the University of Exeter. How effectively the world slashes CO2 and methane emissions, improves energy efficiency and develops technologies to remove CO2 from the air will determine whether climate change remains manageable or unleashes a maelstrom of human misery. Cox and colleagues, using a new methodology, have come up with a far narrower range: 2.2C to 3.4C, with a best estimate of 2.8C.

Climate change conference in trouble as China rejects proposals for new treaty Delegates at COP17. Photograph: Nic Bothma/EPA The climate change talks in Durban were in trouble on Friday night as China's chief negotiator firmly rejected proposals for a new global treaty on greenhouse gas emissions. Su Wei said the proposals were unacceptable because they would lead to the end of the Kyoto protocol, the world's only existing treaty stipulating emissions cuts. He told the Guardian: "The G77 [group of more than 100 developing countries] could not take this [proposal] as the basis for discussion. This is killing the Kyoto protocol.

tribute to Saw O Moo Indigenous activists in Myanmar’s Karen state are mourning the killing of a community leader who campaigned for a peace park to protect a local forest and its residents’ land rights. Saw O Moo was ambushed by government troops on 5 April as he was riding a motorbike with a soldier from the Karen National Liberation Army (KNLA), a rebel group that is fighting for autonomy. The military has claimed both men were pain-clothes rebels “suspected of sabotage” who were armed with grenades at the time of the shooting, according to the Irrawaddy newspaper. But colleagues who worked with Saw O Moo say he was a peaceful campaigner who had simply given a ride to the KNLA soldier. “He was a civilian, and the allegations by the Tatmadaw (Myanmar military) that he was a plain clothes soldier are blatant lies,” said Hsa Moo, media coordinator for the Karen Environmental and Social Action Network, which works for indigenous rights in the region.

Capitalism vs. the Climate Denialists are dead wrong about the science. But they understand something the left still doesn’t get about the revolutionary meaning of climate change. There is a question from a gentleman in the fourth row. He introduces himself as Richard Rothschild. He tells the crowd that he ran for county commissioner in Maryland’s Carroll County because he had come to the conclusion that policies to combat global warming were actually “an attack on middle-class American capitalism.”