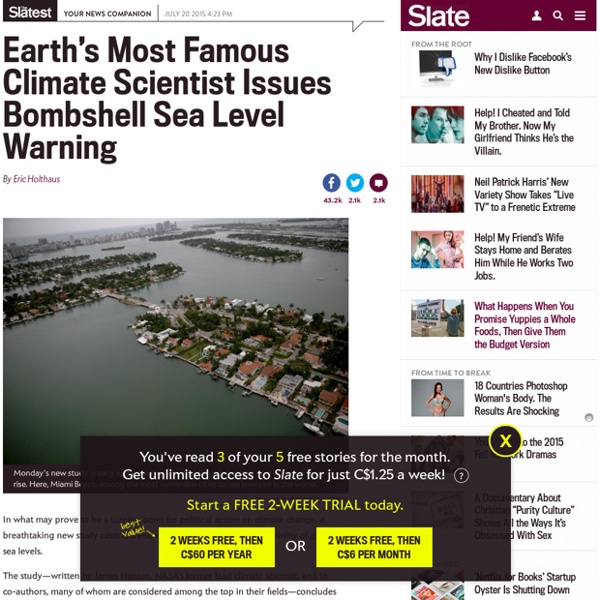 Photo by Joe Raedle/Getty Images In what may prove to be a turning point for political action on climate change, a breathtaking new study casts extreme doubt about the near-term stability of global sea levels. The study—written by James Hansen, NASA’s former lead climate scientist, and 16 co-authors, many of whom are considered among the top in their fields—concludes that glaciers in Greenland and Antarctica will melt 10 times faster than previous consensus estimates, resulting in sea level rise of at least 10 feet in as little as 50 years. The study, which has not yet been peer-reviewed, brings new importance to a feedback loop in the ocean near Antarctica that results in cooler freshwater from melting glaciers forcing warmer, saltier water underneath the ice sheets, speeding up the melting rate. Hansen, who is known for being alarmist and also right, acknowledges that his study implies change far beyond previous consensus estimates.

Networks of Genome Data Will Transform Medicine Breakthrough Technical standards that let DNA databases communicate. Why It Matters Your medical treatment could benefit from the experiences of millions of others. climate loop For decades, scientists have warned that climate change would make extreme events like droughts, floods, hurricanes, and wildfires more frequent, more devastating, or both. In 2017, we got an up-close look at the raw ferocity of such an altered world as high-category hurricanes battered the East and Gulf coasts, and wind-whipped fires scorched the West (see “Did Climate Change Fuel California’s Devastating Fires? Probably”). We’re also seeing with greater clarity how these dangers are interlinked, building upon one another toward perilous climate tipping points. And yet for all the growing risks, and the decades we’ve had to confront them, we have yet to address the problem in a meaningful way (see “Trump’s Five Biggest Energy Blunders in 2017”).

Global Warming’s Terrifying New Chemistry click 2x A Cabot Oil and Gas drill at a hydraulic fracturing site in 2012 in Springville, Pennsylvania. (Photo by Spencer Platt/Getty Images) This post originally appeared at The Nation. Global warming is, in the end, not about the noisy political battles here on the planet’s surface. It actually happens in constant, silent interactions in the atmosphere, where the molecular structure of certain gases traps heat that would otherwise radiate back out to space. If you get the chemistry wrong, it doesn’t matter how many landmark climate agreements you sign or how many speeches you give. We're More than Stardust — We're Made of the Big Bang Itself Transcript Anna Frebel: The work of stellar archaeology really goes to the heart of the "we are stardust" and "we are children of the stars" statement. You’ve probably heard it all but what does it actually mean?

narrower range of outcome Earth’s surface will almost certainly not warm up four or five degrees Celsius by 2100, according to a study which, if correct, voids worst-case UN climate change predictions. A revised calculation of how greenhouse gases drive up the planet’s temperature reduces the range of possible end-of-century outcomes by more than half, researchers said in the report, published in the journal Nature. “Our study all but rules out very low and very high climate sensitivities,” said lead author Peter Cox, a professor at the University of Exeter. How effectively the world slashes CO2 and methane emissions, improves energy efficiency and develops technologies to remove CO2 from the air will determine whether climate change remains manageable or unleashes a maelstrom of human misery.

Migratory birds bumped off schedule as climate change shifts spring GAINESVILLE, Fla. --- New research shows climate change is altering the delicate seasonal clock that North American migratory songbirds rely on to successfully mate and raise healthy offspring, setting in motion a domino effect that could threaten the survival of many familiar backyard bird species. A growing shift in the onset of spring has left nine of 48 species of songbirds studied unable to reach their northern breeding grounds at the calendar marks critical for producing the next generation of fledglings, according to a paper published today in Scientific Reports. That's because in many regions, warming temperatures are triggering plants to begin their growth earlier or later than normal, skewing biological cycles that have long been in sync. The result, researchers say, could be a future much like the one Rachel Carson hinted at more than 50 years ago. The key question, Mayor said, is whether this strategy will work long term. "That's the future many of us will see," he said.

Monkey teeth hint at a miraculous marine migration to North America Scientists have long thought that monkeys first ventured from South America into North America no earlier than about 4 million years ago, when the two continents merged. But seven teeth unearthed in Panama may change that story. These monkey teeth were discovered encased in 21-million-year-old rocks. This suggests that the primates accomplished the impossible: they crossed the more than 100 miles of ocean that separated South America from North America at the time. These prehistoric monkeys, which probably looked like today's capuchin monkeys, are the only mammals known to cross this watery boundary so early, says Jonathan Bloch. Dr.

tribute to Saw O Moo Indigenous activists in Myanmar’s Karen state are mourning the killing of a community leader who campaigned for a peace park to protect a local forest and its residents’ land rights. Saw O Moo was ambushed by government troops on 5 April as he was riding a motorbike with a soldier from the Karen National Liberation Army (KNLA), a rebel group that is fighting for autonomy. The military has claimed both men were pain-clothes rebels “suspected of sabotage” who were armed with grenades at the time of the shooting, according to the Irrawaddy newspaper. But colleagues who worked with Saw O Moo say he was a peaceful campaigner who had simply given a ride to the KNLA soldier. Scientists Saw A Nearly Unheard Of Antarctic Meltdown Antarctica is unfreezing. In the past few months alone, researchers have chronicled a seasonal waterfall, widespread networks of rivers and melt ponds and an iceberg the size of Delaware on the brink of breaking away from the thawing landscape. A new study published in Nature Communications only adds to the disturbing trend of change afoot in Antarctica. Researchers have documented rain on a continent more known for snow and widespread surface melt in West Antarctica last summer, one of the most unstable parts of a continent that’s already being eaten away by warm waters below the ice. Surface melt became widespread over West Antarctica in January 2016.

Missing links brewed in primordial puddles? The crucibles that bore out early building blocks of life may have been, in many cases, modest puddles. Now, researchers working with that hypothesis have achieved a significant advancement toward understanding an evolutionary mystery -- how components of RNA and DNA formed from chemicals present on early Earth before life existed. In surprisingly simple laboratory reactions in water, under everyday conditions, they have produced what could be good candidates for missing links on the pathway to the code of life.

domino hothouse A domino-like cascade of melting ice, warming seas, shifting currents and dying forests could tilt the Earth into a “hothouse” state beyond which human efforts to reduce emissions will be increasingly futile, a group of leading climate scientists has warned. This grim prospect is sketched out in a journal paper that considers the combined consequences of 10 climate change processes, including the release of methane trapped in Siberian permafrost and the impact of melting ice in Greenland on the Antarctic. The authors of the essay, published in Proceedings of the National Academy of Sciences, stress their analysis is not conclusive, but warn the Paris commitment to keep warming at 2C above pre-industrial levels may not be enough to “park” the planet’s climate at a stable temperature. “I do hope we are wrong, but as scientists we have a responsibility to explore whether this is real,” said Johan Rockström, executive director of the Stockholm Resilience Centre. “We need to know now.

New state of water molecule discovered Scientists, including one of Indian-origin, have unveiled unique and unexpected behaviour of water molecules that is unmatched by any known gas, liquid or solid states. Researchers at the US Department of Energy's Oak Ridge National Laboratory (ORNL) described a new tunnelling state of water molecules confined in hexagonal ultra-small channels - 5 angstrom across - of the mineral beryl. An angstrom is 1/10-billionth of a metre, and individual atoms are typically about one angstrom in diameter.

collapse of civilisation A shattering collapse of civilisation is a “near certainty” in the next few decades due to humanity’s continuing destruction of the natural world that sustains all life on Earth, according to biologist Prof Paul Ehrlich. In May, it will be 50 years since the eminent biologist published his most famous and controversial book, The Population Bomb. But Ehrlich remains as outspoken as ever. The world’s optimum population is less than two billion people – 5.6 billion fewer than on the planet today, he argues, and there is an increasing toxification of the entire planet by synthetic chemicals that may be more dangerous to people and wildlife than climate change. Ehrlich also says an unprecedented redistribution of wealth is needed to end the over-consumption of resources, but “the rich who now run the global system – that hold the annual ‘world destroyer’ meetings in Davos – are unlikely to let it happen”. The solutions are tough, he says.