2℃ Tipping Point Reached. Reuben Wu Decarbonizing the world economy will require renewable energy generation from vast solar farms, such as this one in Nevada. 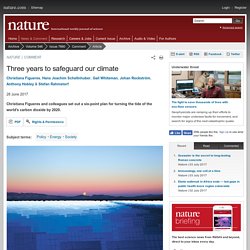 In the past three years, global emissions of carbon dioxide from the burning of fossil fuels have levelled after rising for decades. This is a sign that policies and investments in climate mitigation are starting to pay off. The United States, China and other nations are replacing coal with natural gas and boosting renewable energy sources.

'Record' Hot Year of 2015 Now the Average. The hottest year on record globally in 2015 could be an average year by 2025 and beyond if carbon emissions continue to rise at the same rate, new research has found. 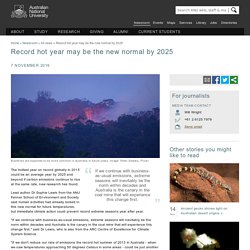 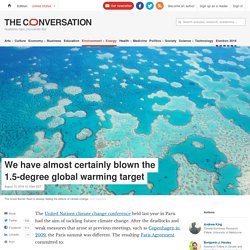 After the deadlocks and weak measures that arose at previous meetings, such as Copenhagen in 2009, the Paris summit was different. The resulting Paris Agreement committed to: AGW Outstrips New Crop Varieties' Ability to Cope. Image copyright Getty Images Crops yields around the world could fall within a decade unless action is taken to speed up the introduction of new varieties. 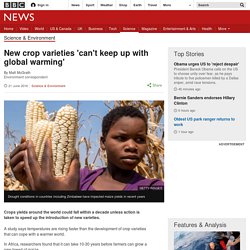 Many Areas Experiencing Pliocene-Like Conditions. Our current rate of warming will quickly lead us back to a climate that predates the evolution of modern humans, according to a new study in the Proceedings of the National Academy of Sciences. 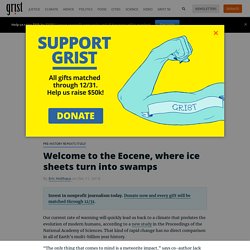 That kind of rapid change has no direct comparison in all of Earth’s multi-billion year history. “The only thing that comes to mind is a meteorite impact,” says co-author Jack Williams, a paleoecologist at the University of Wisconsin-Madison. The researchers analyzed the current, near-past, and near-future climates for every part of the planet, and then compared them to what likely existed during similar warming periods of the distant past. The results were shocking, even to Williams. “We are creating a geological-scale climate event,” Williams says. Without rapidly reducing emissions, we’ll quickly go back to a climate similar to somewhere between the Pliocene and Eocene — geological epochs that occurred about 3 million, and about 56 million years ago, respectively. 2℃ Warming Threshold Exceeded. Melbourne & Sydney Experiencing 50℃ Days. Meet Casey X. 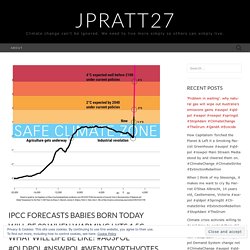 She was born in Alice Springs Hospital on October 13, 2018. She came into the world screaming, before projectile-vomiting over the hospital floor and falling asleep. Today — October 13, 2040 — she’s 22, and still lives in Alice Springs. But she’s been thinking more and more about leaving. Extreme hot days in Alice Springs hit 48 degrees Celsius — nearly 3C hotter than on her first birthday. Global Warming Exceeds 1.5°C Limit. The planet is on course to breach the internationally agreed warming limit of 1.5°C within 10 years, according to new research from Australia. 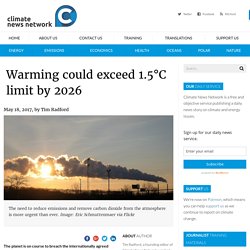 LONDON, 18 May, 2017 – Australian scientists have warned that planetary average temperatures could breach the internationally agreed target barrier of a 1.5°C rise as early as 2026. Although global warming is driven by human behaviour – and in particular the prodigal burning of fossil fuels at an ever-accelerating rate to dump ever-greater quantities of carbon dioxide in the atmosphere – it is also influenced by natural climate rhythms.

And, say scientists from Australia’s Centre of Excellence for Climate System Science, one of these is a slow-moving oceanic and atmospheric cycle called the Interdecadal Pacific Oscillation (IPO), which blows hot and cold and then hot again, every decade or so. The latest hot phase could be about to push the global thermometer beyond the ideal limit set by the UN climate conference in Paris in 2015. 50% of Global Population Facing Unknown Climates. Billions of people across the world could see climates they’ve never experienced before by the middle of the century, a new study says. 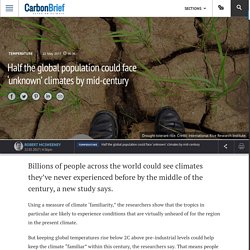 Using a measure of climate ‘familiarity,” the researchers show that the tropics in particular are likely to experience conditions that are virtually unheard of for the region in the present climate. But keeping global temperatures rise below 2C above pre-industrial levels could help keep the climate “familiar” within this century, the researchers say. High-Temp Flight Delays a Regular Occurrence. Imagine boarding a summertime flight at LaGuardia Airport in New York City, only to be told that the airline needs a dozen or so passengers to take a later flight because it’s too hot outside for the plane to take off fully loaded. 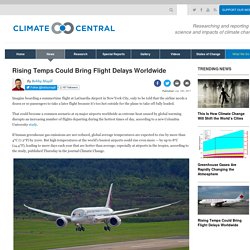 That could become a common scenario at 19 major airports worldwide as extreme heat caused by global warming disrupts an increasing number of flights departing during the hottest times of day, according to a new Columbia University study. If human greenhouse gas emissions are not reduced, global average temperatures are expected to rise by more than 4°C (7.2°F) by 2100. Average Temperature Rises 2℃ Above Normal. The world could hit two degrees Celsius of warming – the point at which many scientists believe climate change will become dangerous – as early as 2050, a group of leading experts has warned. 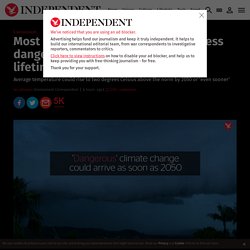 In a report called The Truth About Climate Change, they said many people seemed to think of global warming as “abstract, distant and even controversial”. But the planet is now heating up “much faster” than anticipated, said Professor Sir Robert Watson, a former chair of the Intergovernmental Panel on Climate Change and one of the authors of the report. Fisheries Harvests Drop 30% Due To Soaring Ocean Temps.

The soaring temperature of the oceans is the “greatest hidden challenge of our generation” that is altering the make-up of marine species, shrinking fishing areas and starting to spread disease to humans, according to the most comprehensive analysis yet of ocean warming. The oceans have already sucked up an enormous amount of heat due to escalating greenhouse gas emissions, affecting marine species from microbes to whales, according to an International Union for Conservation of Nature (IUCN) report involving the work of 80 scientists from a dozen countries.

The profound changes underway in the oceans are starting to impact people, the report states. “Due to a domino effect, key human sectors are at threat, especially fisheries, aquaculture, coastal risk management, health and coastal tourism.” Dan Laffoley, IUCN marine adviser and one of the report’s lead authors, said: “What we are seeing now is running well ahead of what we can cope with.

US SW Experiencing Mega-Drought. Southern California was ready to burn. El Niño rains that topped off reservoirs in the north of the state barely drizzled down south, leaving the region in a worst-in-centuries drought. By June, tree die-off in state forests, accelerated by bark beetles feasting on dry pines, had more than doubled from 2015, topping 66 million.

>970 Cities Experiencing Ave. Summertime Temps of ≥35˚C. Summary. African Heatwaves Increase ‘Five-Fold’ with 3℃ of Global Warming. The number of heatwaves affecting the African continent every year could be five times higher by 2050 as a result of climate change, a new study finds. Global warming of 3C above pre-industrial levels could also alter rainfall patterns across the continent, the research says, which could bring droughts to some countries and an increase in flood risk to others. However, limiting warming to 1.5C – the aspirational goal of the Paris Agreement – could greatly reduce the risk of heatwaves and other climate extremes in Africa, the lead author tells Carbon Brief. Continental countdown The new study, published in Earth’s Future, focuses on how global warming could impact a range of climate variables that tend to have a large effect on human life, including heatwaves, “hot nights” and rainfall intensity.

Most of Nicaragua's Coffee Industry Lost. Arctic Temperature Rises 3-5°C. GHG Emissions Increased 43% Over Past 40 Years. The extraction and processing of natural resources now accounts for more than 90 percent of global biodiversity loss and water stress impacts, and approximately half of global greenhouse gas emissions, a flagship UN report concludes. The Global Resources Outlook report, released on Tuesday at the United Nations Environmental Assembly in Nairobi, Kenya, provides a global analysis of the world's natural resource use and management.

The report depicts a story of relentless growth and increasingly severe trade-offs for human well-being and environmental health. Resource inequity. Summer Temperatures Hit 5°C Above Average. One Billion Living in Insufferable Heat. The human cost of the climate crisis will hit harder, wider and sooner than previously believed, according to a study that shows a billion people will either be displaced or forced to endure insufferable heat for every additional 1C rise in the global temperature. Ave. Surface Temp. 2º > Pre-Industrial Levels. Thousands of Heat Deaths in New York City. N.China Experiencing Repeated Fatal WBTs of 35℃ Great Lakes Spring Comes a Month Early. Warm springs in the Great Lakes and Northeast regions – which create havoc for agriculture – may start earlier by mid-century if greenhouse gas emissions are not reduced, according to a new Cornell study published in Climate Dynamics. Arctic Temperature Rises 5-9°C. Global Warming Reaches 4°C. 24th May 2018 Global warming predicted to reach 4°C by 2084.

Few Cities Cool Enough for Summer Olympics. By 2085, only eight Northern Hemisphere cities outside of western Europe are likely to be cool enough to host the summer Olympic games, predict researchers. San Francisco would be one of just three North American cities that could serve as hosts, they say. Wellington Gets Almost a Month of Days Over 25°C. Wellington city will have warmer autumns, almost a month of days over 25°C and up to 10 per cent more winter rain by 2090, according to a new NIWA climate report. The Climate Change Report for Wellington Region has just been released that shows specific weather changes for the capital, Kapiti Coast, Hutt Valley and Wairarapa for the first time.