The Year Climate Change Began to Spin Out of Control 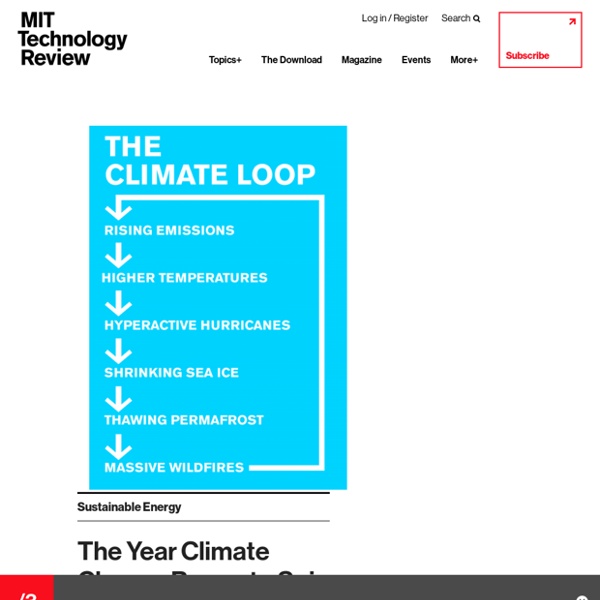 For decades, scientists have warned that climate change would make extreme events like droughts, floods, hurricanes, and wildfires more frequent, more devastating, or both. In 2017, we got an up-close look at the raw ferocity of such an altered world as high-category hurricanes battered the East and Gulf coasts, and wind-whipped fires scorched the West (see “Did Climate Change Fuel California’s Devastating Fires? Probably”). We’re also seeing with greater clarity how these dangers are interlinked, building upon one another toward perilous climate tipping points. And yet for all the growing risks, and the decades we’ve had to confront them, we have yet to address the problem in a meaningful way (see “Trump’s Five Biggest Energy Blunders in 2017”). In fact, despite all our climate policies, global accords, solar advances, wind farms, hybrid cars, and Teslas, greenhouse-gas emissions are still moving in the wrong direction. Emissions are rising again Hyperactive hurricanes The melting Arctic

Climate change will displace millions Wildfires tearing across Southern California have forced thousands of residents to evacuate from their homes. Even more people fled ahead of the hurricanes that slammed into Texas and Florida earlier this year, jamming highways and filling hotels. A viral social media post showed a flight-radar picture of people trying to escape Florida and posed a provocative question: What if the adjoining states were countries and didn’t grant escaping migrants refuge? By the middle of this century, experts estimate that climate change is likely to displace between 150 and 300 million people. If this group formed a country, it would be the fourth-largest in the world, with a population nearly as large as that of the United States. Yet neither individual countries nor the global community are completely prepared to support a whole new class of “climate migrants.”

Pope Francis' associates compare right-wing US Christians with jihadists - The i newspaper online iNews Two leading theologians close to Pope Francis have said that American evangelicals and hard-line Catholics have a worldview that is “not too far apart’’ from jihadists. Their article in the journal Civilta’ Cattolica, which has outraged religious conservatives in the US, goes on to accuse right-wing Catholics and Christians of making an unholy pact with President Trump, and of deepening political polarisation in the United States. Some experts have interpreted the article as a call from Pope Francis himself for the church to dissociate itself from the US administration’s right-wing policies on everything from climate change to migration.

Big Oil’s decades of deception: Report reveals that Exxon’s known the truth about climate science since 1981 While evaluating the potential impact of developing a gas field it was interested in off Indonesia, ExxonMobil found one major reason for concern: the field in question was 70 percent carbon dioxide. If the field were developed, and that gas vented into the atmosphere, it could become the “largest point source of CO2 in the world,” accounting for a full one percent of climate change-causing emissions. According to Leonard S. Bernstein, a former chemical engineer at the company, Exxon recognized the potential for global warming concerns to lead to regulations that would impact the project and others like it. The year was 1981.

There's No Scientific Basis for Race—It's a Made-Up Label This story is part of The Race Issue, a special issue of National Geographic that explores how race defines, separates, and unites us. In the first half of the 19th century, one of America’s most prominent scientists was a doctor named Samuel Morton. Morton lived in Philadelphia, and he collected skulls. He wasn’t choosy about his suppliers. Memo Restoring Use of Private Prisons Is Good News for One Company Memo Restoring Use of Private Prisons [...] Attorney General Jeff Sessions holds a meeting with the heads of federal law enforcement components at the Department of Justice Feb. 9, 2017 in Washington, DC. (Photo by Susan Walsh-Pool/Getty Images)

GAO: Climate change already costing US billions in losses WASHINGTON (AP) — A non-partisan federal watchdog says climate change is already costing U.S. taxpayers billions of dollars each year, with those costs expected to rise as devastating storms, floods, wildfires and droughts become more frequent in the coming decades. A Government Accountability Office report released Monday said the federal government has spent more than $350 billion over the last decade on disaster assistance programs and losses from flood and crop insurance. That tally does not include the massive toll from this year's wildfires and three major hurricanes, expected to be among the most costly in the nation's history.

Climate change: 'Hothouse Earth' risks even if CO2 emissions slashed Image copyright Getty Images It may sound like the title of a low budget sci-fi movie, but for planetary scientists, "Hothouse Earth" is a deadly serious concept. Researchers believe we could soon cross a threshold leading to boiling hot temperatures and towering seas in the centuries to come. Even if countries succeed in meeting their CO2 targets, we could still lurch on to this "irreversible pathway". Their study shows it could happen if global temperatures rise by 2C. Some States Spend Billions on Economic Tax Incentives for Little or No Return By one estimate, state and local governments spend at least $45 billion a year on tax breaks and other incentives to lure or keep job-producing businesses and plants in their jurisdictions. New York, for example, plows billions of dollars into the Empire State Development Corp. and Democratic Gov. Andrew Cuomo’s signature Start-Up NY program.

Americans Will Pay Billions More For Climate Change, and That’s the Best Case Photographer: The Washington Post/The Washington Post The Trump administration just published a major report documenting the advance of climate change, weeks earlier than expected and on a day many Americans are occupied with family and holiday shopping. The news is predictably bad, but this time the tally comes with a pricetag—one significantly larger than you’ll find at the mall. The report catalogs the observed damage and accelerating losses projected from a climate now unmoored from a 12,000-year period of relative stability.