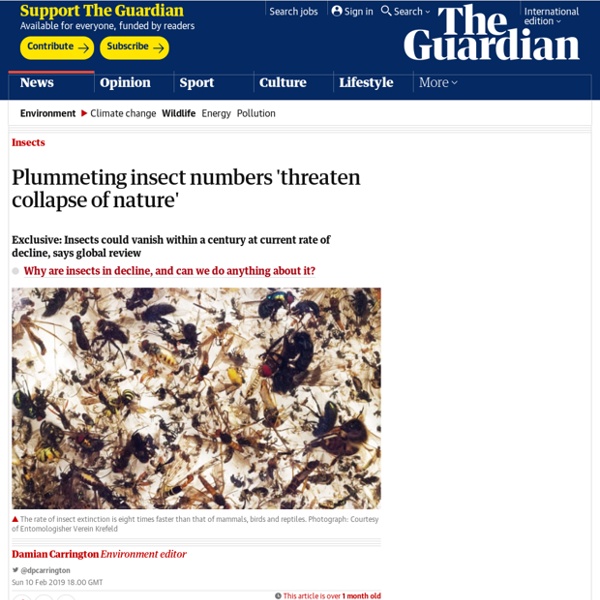 The world’s insects are hurtling down the path to extinction, threatening a “catastrophic collapse of nature’s ecosystems”, according to the first global scientific review. More than 40% of insect species are declining and a third are endangered, the analysis found. The rate of extinction is eight times faster than that of mammals, birds and reptiles. The total mass of insects is falling by a precipitous 2.5% a year, according to the best data available, suggesting they could vanish within a century. The planet is at the start of a sixth mass extinction in its history, with huge losses already reported in larger animals that are easier to study. But insects are by far the most varied and abundant animals, outweighing humanity by 17 times. Insect population collapses have recently been reported in Germany and Puerto Rico, but the review strongly indicates the crisis is global. One of the biggest impacts of insect loss is on the many birds, reptiles, amphibians and fish that eat insects.

worrying rise in global co2 The level of climate-warming carbon dioxide (CO2) in the atmosphere is forecast to rise by a near-record amount in 2019, according to the Met Office. The increase is being fuelled by the continued burning of fossil fuels and the destruction of forests, and will be particularly high in 2019 due to an expected return towards El Niño-like conditions. This natural climate variation causes warm and dry conditions in the tropics, meaning the plant growth that removes CO2 from the air is restricted. ‘The devastation of human life is in view’: what a burning world tells us about climate change I have never been an environmentalist. I don’t even think of myself as a nature person. I’ve lived my whole life in cities, enjoying gadgets built by industrial supply chains I hardly think twice about. I’ve never gone camping, not willingly anyway, and while I always thought it was basically a good idea to keep streams clean and air clear, I also accepted the proposition that there was a trade-off between economic growth and cost to nature – and figured, well, in most cases I’d go for growth.

Life-saving optimism: what the west can learn from Africa Nigeria, like most African nations, has been taught and dictated to since its independence, largely seen by the rest of the world as a receptacle for ideas rather than a generator of them. But is there something the world could learn from us? During the past few weeks in Nigeria, I’ve interviewed some 40 strangers whose lives, like those of most people in the country, were mired in want and suffering. Everywhere, people ambled about sweating, their skins wearing gradations of deprivation. Everywhere you turned there was a conspicuous lack of opportunities. A quantum experiment suggests there’s no such thing as objective reality Back in 1961, the Nobel Prize–winning physicist Eugene Wigner outlined a thought experiment that demonstrated one of the lesser-known paradoxes of quantum mechanics. The experiment shows how the strange nature of the universe allows two observers—say, Wigner and Wigner’s friend—to experience different realities. Since then, physicists have used the “Wigner’s Friend” thought experiment to explore the nature of measurement and to argue over whether objective facts can exist.

humanity wiped out 60% of animals Humanity has wiped out 60% of mammals, birds, fish and reptiles since 1970, leading the world’s foremost experts to warn that the annihilation of wildlife is now an emergency that threatens civilisation. The new estimate of the massacre of wildlife is made in a major report produced by WWF and involving 59 scientists from across the globe. It finds that the vast and growing consumption of food and resources by the global population is destroying the web of life, billions of years in the making, upon which human society ultimately depends for clean air, water and everything else. “We are sleepwalking towards the edge of a cliff” said Mike Barrett, executive director of science and conservation at WWF. “If there was a 60% decline in the human population, that would be equivalent to emptying North America, South America, Africa, Europe, China and Oceania. That is the scale of what we have done.”

The Uninhabitable Earth: David Wallace-Wells on the horrors of climate change “It is, I promise, worse than you think.” That was was the first line of David Wallace-Wells’s horrifying 2017 essay in New York magazine about climate change. It was an attempt to paint a very real picture of our not-too-distant future, a future filled with famines, political chaos, economic collapse, fierce resource competition, and a sun that “cooks us.” Wallace-Wells has since developed his terrifying essay into an even more terrifying book, titled The Uninhabitable Earth: Life After Warming.

We have 12 years to limit climate change catastrophe, warns UN The world’s leading climate scientists have warned there is only a dozen years for global warming to be kept to a maximum of 1.5C, beyond which even half a degree will significantly worsen the risks of drought, floods, extreme heat and poverty for hundreds of millions of people. The authors of the landmark report by the UN Intergovernmental Panel on Climate Change (IPCC) released on Monday say urgent and unprecedented changes are needed to reach the target, which they say is affordable and feasible although it lies at the most ambitious end of the Paris agreement pledge to keep temperatures between 1.5C and 2C. The half-degree difference could also prevent corals from being completely eradicated and ease pressure on the Arctic, according to the 1.5C study, which was launched after approval at a final plenary of all 195 countries in Incheon in South Korea that saw delegates hugging one another, with some in tears. The world is currently 1C warmer than preindustrial levels.