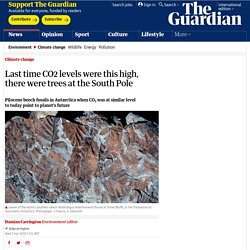 That is the world scientists are uncovering as they look back in time to when the planet last had as much carbon dioxide in the atmosphere as it does today. Using sedimentary records and plant fossils, researchers have found that temperatures near the South Pole were about 20C higher than now in the Pliocene epoch, from 5.3m to 2.6m years ago. Many scientists use sophisticated computer models to predict the impacts of human-caused climate change, but looking back in time for real-world examples can give new insights. The Pliocene was a “proper analogy” and offered important lessons about the road ahead, said Martin Siegert, a geophysicist and climate-change scientist at Imperial College London. “The headline news is the temperatures are 3-4C higher and sea levels are 15-20 metres higher than they are today.

About 100m years ago an even more extreme climate occurred. Ocean Warming Equivalent Heating of 3 to 5 Nuclear Detonations/Second. NZ Seas in 2018 Hottest on Record. It is official, the seas around New Zealand in 2018 were the hottest on record. 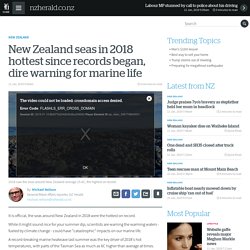 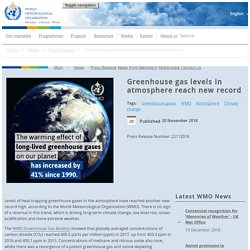 There is no sign of a reversal in this trend, which is driving long-term climate change, sea level rise, ocean acidification and more extreme weather. The WMO Greenhouse Gas Bulletin showed that globally averaged concentrations of carbon dioxide (CO2) reached 405.5 parts per million (ppm) in 2017, up from 403.3 ppm in 2016 and 400.1 ppm in 2015. Concentrations of methane and nitrous oxide also rose, whilst there was a resurgence of a potent greenhouse gas and ozone depleting substance called CFC-11, which is regulated under an international agreement to protect the ozone layer. 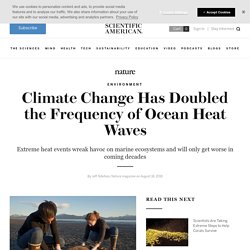 These episodes of intense heat could disrupt marine food webs and reshape biodiversity in the world’s oceans. Scientists analysed satellite-based measurements of sea surface temperature from 1982 to 2016 and found that the frequency of marine heatwaves had doubled. These extreme heat events in the ocean's surface waters can last from days to months and can occur across thousands of kilometres. If average global temperatures increase to 3.5 °C above pre-industrial levels by the end of the century, as researchers currently project, the frequency of ocean heatwaves could increase by a factor of 41.

Earth the Warmest it's been in 120,000 Years. Exceptional Heat Records Consistent with Expectations in a Warming World. Temperature difference from normal May through July. 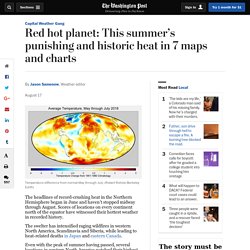 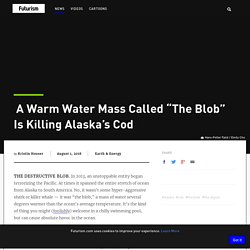 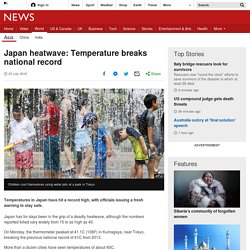 Japan has for days been in the grip of a deadly heatwave, although the numbers reported killed vary widely from 15 to as high as 40. On Monday, the thermometer peaked at 41.1C (106F) in Kumagaya, near Tokyo, breaking the previous national record of 41C from 2013. More than a dozen cities have seen temperatures of about 40C. Japan's disaster management agency urged people to stay in air-conditioned spaces, drink water and rest to prevent heat exhaustion. "People in areas where temperatures are as high as 35 degrees or higher should be extremely careful" to avoid heatstroke, a meteorological agency official told news agency AFP. "And even at lower temperatures, the heat can be dangerous for small children and elderly people, and depending on the environment and activities you are doing," the official warned. Image Copyright @nagaraj_keshav @nagaraj_keshav. 2017 the 3rd Warmest Year on Record. CO₂ Concentrations at Levels Not Seen in 800,000 Years.

CO₂ Exceeds 410ppm; a First for Human History. During May of 2018, average monthly CO2 values will likely range between 411 and 412 parts per million. 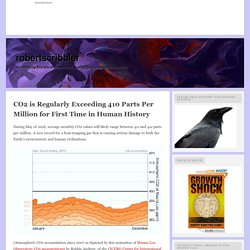 A new record for a heat-trapping gas that is causing serious damage to both the Earth’s environment and human civilizations. (Atmospheric CO2 accumulation since 2007 as depicted by this animation of Mauna Loa Observatory CO2 measurements by Robbie Andrew, of the CICERO Center for International Climate Research.) There’s one word that best describes this — trouble. And in the most simple terms it means that more unprecedented severe weather, ocean health impacts, and sea level rise is on the way. 2017 Warmest Year on Record Without El Niño. Provisional figures for global average near-surface temperatures confirm that last year, 2017, was the warmest year on record without the influence of warming from El Niño. 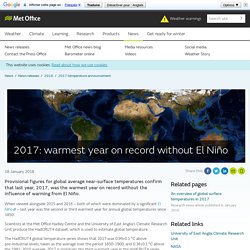 When viewed alongside 2015 and 2016 – both of which were dominated by a significant El Niño – last year was the second or third warmest year for annual global temperatures since 1850. Scientists at the Met Office Hadley Centre and the University of East Anglia's Climatic Research Unit produce the HadCRUT4 dataset, which is used to estimate global temperature. The HadCRUT4 global temperature series shows that 2017 was 0.99±0.1 °C above pre-industrial levels, taken as the average over the period 1850-1900, and 0.38±0.1 °C above the 1981-2010 average. 2017 is nominally the third warmest year in the HadCRUT4 series. Figures from other global centres place 2017 as second or third warmest. 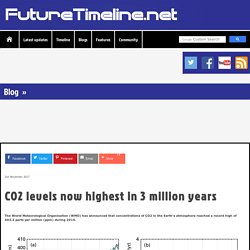 Concentrations of carbon dioxide in Earth's atmosphere surged at a record-breaking speed in 2016, according to the World Meteorological Organisation's Greenhouse Gas Bulletin. The abrupt changes in the atmosphere witnessed in the past 70 years are "without precedent", says the WMO, and the rate of increase in CO2 is nearly 100 times faster than during the end of the last ice age.

Globally averaged concentrations of CO2 reached 403.3 ppm in 2016 – up from 400.0 ppm in 2015 – caused by a combination of human activities and a strong El Niño event. "It is the largest increase we have ever seen in the 30 years we have had this network," said Dr Oksana Tarasova, chief of WMO's global atmosphere watch programme, in an interview with BBC News. 2016's Global Temps the Highest Ever Recorded. Less than a week after President Donald Trump notified the United Nations of his intent to exit from the Paris climate accord, his government’s chief science agency released a report demonstrating that global warming is real and getting worse.

The report, prepared by almost 500 scientists from around the world, shows that last year’s average global temperatures were the highest ever recorded. There were more major tropical cyclones than usual, longer droughts and less snow cover. After years of increasing, Antarctic sea ice declined, undercutting an argument by those who dispute the science of global warming.

"The major indicators of climate change continued to reflect trends consistent with a warming planet," said the report, which was edited by Jessica Blunden and Derek S. 3rd-Hottest June Puts 2017 on Track to Make Hat-Trick of Hottest Years. Last month was the third-hottest June on record globally, temperature data suggest, confirming 2017 will almost certainly make a hat-trick of annual climate records, with 2015, 2016 and 2017 being the three hottest years since records began. The figures also cement estimations that warming is now at levels not seen for 115,000 years, and leave some experts with little hope for limiting warming to 1.5C or even 2C. Highest GHG's in 5-20m Years. This past week, atmospheric carbon dioxide levels passed a new ominous milestone. Clocking in at 410.7 parts per million at the Mauna Loa Observatory, this key heat trapping gas hit a range not seen on Earth for many millions of years.

China Achieves 3rd Year of Zero Emission Increase; Future Uncertain. Published 06.03.2017 Chinese coal consumption dropped for the third year in a row in 2016, while CO2 emissions grew only slightly. The World at 1°C. Scientist Poll Finds None Believe 2℃ Target Achievable. It all seemed so simple in 2008. All we had was financial collapse, a cripplingly high oil price and global crop failures due to extreme weather events. In addition, my climate scientist colleague Dr Viki Johnson and I worked out that we had about 100 months before it would no longer be “likely” that global average surface temperatures could be held below a 2C rise, compared with pre-industrial times.

Hottest Planet in 115,000 Years. The global temperature has increased to a level not seen for 115,000 years, requiring daunting technological advances that will cost the coming generations hundreds of trillions of dollars, according to the scientist widely credited with bringing climate change to the public’s attention. A new paper submitted by James Hansen, a former senior Nasa climate scientist, and 11 other experts states that the 2016 temperature is likely to be 1.25C above pre-industrial times, following a warming trend where the world has heated up at a rate of 0.18C per decade over the past 45 years.

New Temperature Record for MENA. NOAA Scorecard Tracks Shattered Records. The world is careening towards an environment never experienced before by humans, with the temperature of the air and oceans breaking records, sea levels reaching historic highs and carbon dioxide surpassing a key milestone, a major international report has found. 400ppm World Threshold Passed. Record Water Temperatures for US East Coast. Hottest Month on Record. 2015 Confirmed as Earth’s Warmest Year on Record. 400ppm Passed At Aptly Named Cape Grim. Within the next couple of weeks, a remote part of north-western Tasmania is likely to grab headlines around the world as a major climate change marker is passed.