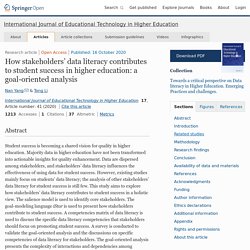 J., Liatsis, P., & Keight, R. (2018). Analyzing learners behavior in MOOCs: An examination of performance and motivation using a data-driven approach. IEEE Access, 6, 73669–73685.Article Google Scholar Beneito-Montagut, R. (2017). Big data and educational research. Digital Literacies and eCompetence. 17439884.2020. This article addresses the deliberately speculative question of ‘What might the school of 2030 be like?’ 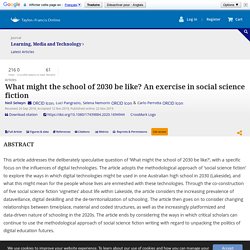 , with a specific focus on the influences of digital technologies. The article adopts the methodological approach of ‘social science fiction’ to explore the ways in which digital technologies might be used in one Australian high school in 2030 (Lakeside), and what this might mean for the people whose lives are enmeshed with these technologies. Through the co-construction of five social science fiction ‘vignettes’ about life within Lakeside, the article considers the increasing prevalence of dataveillance, digital deskilling and the de-territorialization of schooling.

The article then goes on to consider changing relationships between time/place, material and coded structures, as well as the increasingly platformized and data-driven nature of schooling in the 2020s. Developing Digital Literacy Skills - Developing Digital Literacy Skills Digital literacy refers to a particular set of competencies that allow you to function and participate fully in a digital world. 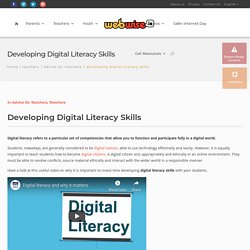 Students, nowadays, are generally considered to be digital natives; able to use technology effectively and easily. However, it is equally important to teach students how to become digital citizens. Privacy matters because it empowers us all. Imagine having a master key for your life. 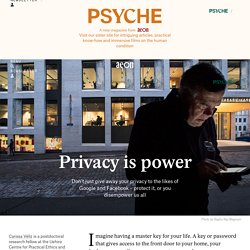 A key or password that gives access to the front door to your home, your bedroom, your diary, your computer, your phone, your car, your safe deposit, your health records. Would you go around making copies of that key and giving them out to strangers? Probably not the wisest idea – it would be only a matter of time before someone abused it, right? So why are you willing to give up your personal data to pretty much anyone who asks for it? 13562517.2018. DIGITAL LITERACY VS THE ANTI-HUMAN MACHINE: A PROXY DEBATE FOR OUR TIMES? (For the Vox Pol report that asks is digital literacy a solution to hate speech, extremism, and associated activities online?) 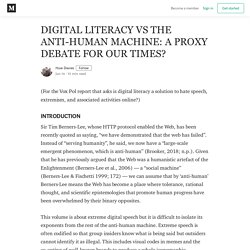 Sir Tim Berners-Lee, whose HTTP protocol enabled the Web, has been recently quoted as saying, “we have demonstrated that the web has failed”. Instead of “serving humanity”, he said, we now have a “large-scale emergent phenomenon, which is anti-human” (Brooker, 2018; n.p.). Given that he has previously argued that the Web was a humanistic artefact of the Enlightenment (Berners-Lee et al., 2006) — a “social machine” (Berners-Lee & Fischetti 1999; 172) — we can assume that by ‘anti-human’ Berners-Lee means the Web has become a place where tolerance, rational thought, and scientific epistemologies that promote human progress have been overwhelmed by their binary opposites.

This volume is about extreme digital speech but it is difficult to isolate its exponents from the rest of the anti-human machine. This means the problem is much bigger than skills. Atwan, A. What should be learnt? – The halfbaked.education blog. During my inaugural I asked participants to rank how important they thought a number of different possible 'learning outcomes' would be in 2033. 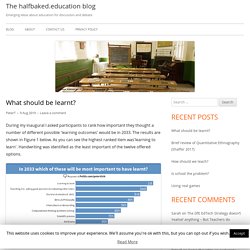 The results are shown in Figure 1 below. As you can see the highest ranked item was'learning to learn'. Handwriting was identified as the least important of the twelve offered options. Of course we cannot know what the most important things will be for young people to learn to prepare them for life in 2033 because we cannot know what life will be like then. Looking back to 2005 illustrates the magnitude of change in the last 14 years (see Figure 2). Care at the core. How should we teach? – The halfbaked.education blog. In my last post I set out why I thought schooling as it currently exists is a problem. 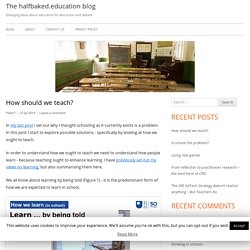 In this post I start to explore possible solutions - specifically by looking at how we ought to teach. In order to understand how we ought to teach we need to understand how people learn - because teaching ought to enhance learning. I have previously set out my views on learning, but also summarising them here. We all know about learning by being told (Figure 1) - it is the predominant form of how we are expected to learn in school. We are also familiar with the idea of learning by doing, though in schools this is usually decontextualised (Figure 2). Theorizing digital learning. This post is inspired by Dean Dad’s July 10 piece “Ideas in Search of a Theory: Day Two of the ‘Future of Higher Ed’ Conference.” 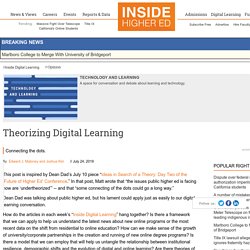 In that post, Matt wrote that “the issues public higher ed is facing now are ‘undertheorized’” -- and that “some connecting of the dots could go a long way.” Dean Dad was talking about public higher ed, but his lament could apply just as easily to our digital learning conversation. How do the articles in each week’s “Inside Digital Learning” hang together?

Is there a framework that we can apply to help us understand the latest news about new online programs or the most recent data on the shift from residential to online education? Anyone adding this to their reading list? #LAICILIPire19… #OpenBlog19 Are we the baddies? – Do academics dream of electric sheep? I’ve been thinking a lot about critical digital literacies and how I, as a supplier and ‘evangelist’, balance my professional role and my personal views. 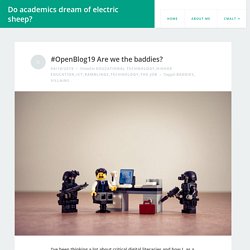 It has lead me to ask “are we the baddies?”. Before you read on, watch this brilliant Mitchell and Webb sketch: Who’s we? Well, I suppose I’m talking about those of us who make decisions about technologies, promote technologies or supply them. Particularly, institutionally-provided technologies. I am a supplier of services. 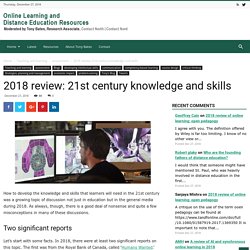 As always, though, there is a good deal of nonsense and quite a few misconceptions in many of these discussions. Two significant reports Let’s start with some facts. In 2018, there were at least two significant reports on this topic. The first was from the Royal Bank of Canada, called ‘Humans Wanted.’ The main conclusion was that there will be plenty of jobs in the future, but they will require different skills from those generally required at the present. Two of the main conclusions from the report were as follows: The second report was from the Higher Education Quality Council of Ontario (HEQCO) that claimed to be ‘one of the first major attempts to measure employment-related skills in university and college students on a large scale.’

Introduction Education and training are the best investments in Europe’s future. Learning Wales. Digital competence is one of 3 cross-curricular responsibilities, alongside literacy and numeracy. It focuses on developing digital skills which can be applied to a wide range of subjects and scenarios. The Framework, which has been developed by practitioners from Pioneer Schools, supported by external experts, has 4 strands of equal importance, each with a number of elements. Critical digital literacy: ten key readings for our distrustful media age. Misinformation and distrust are the characteristic of our time. They make the question of how to approach and promote critical digital literacy particularly important. Gianfranco Polizzi suggests ten texts that offer a framework for thinking about how to do it.

Since the 2016 US election and Brexit, debate around so-called ‘fake news’ has sharpened concerns that the internet and social media are spreading misinformation and thereby undermining democracy and its reliance on a well-informed citizenry. But the problem of misinformation is not the outcome of using digital media per se. The Zinoviev letter, published in 1924 by the Daily Mail, is an example of ‘fake news’ that preceded the internet by many decades. My Modern Professional Learners Toolkit. Jane Hart has derived a framework for the Modern Professional Learner’s Toolkit, based on the results of her Top 100 Tools for Learning survey results. After reading Harold Jarche and Clark Quinn’s personal toolkits, I was inspired to share my own. This one could get quite large and is ever evolving but here are a few of the places that I frequently find myself. YouTube, Wikipedia, blogs from people in my PLN (see the news & curation section below), and Stitcher for listening to podcasts and other audio resources.

It surfaces ideas in ways that are theoretically and methodologically ground-breaking … a refreshing, hopeful, and above all, challenging book, that enables, develops and supports new thinking in media education and literacy studies. Accessibly written, this is a welcome addition to the field, which speaks to the cultural context of civic engagement for young people in and out of school, or ‘not-school’. The Essential Elements of Digital Literacies (QUB, April 2017) - Google Slides. Sign IN - Open University. The 14 Most Destructive Millennial Myths Debunked by Data. “My generation sucks.” “Embarrassing to be apart of the “handout” generation offended by everything.” YSJ Talking about Teaching keynote. Yes, Digital Literacy. But Which One? Latest @SussexTEL podcast episode on Digitial Literacies with @jsecker. Developing digital literacies.

Introduction The UCISA User Skills Group are pleased to launch the first of what we plan to be a biennial survey of the UK HE sector, focusing on what have variously been called digital capabilities, digital literacies or digital competencies. This survey, and those to come, will start to describe how institutions are developing people to perform efficiently and effectively in a digital environment. It will complement the technology enhanced learning (TEL) survey that the UCISA Academic Skills Group runs, but will look at broader digital capabilities instead of TEL software and approaches.

Early August 2014 The survey will be launched early August, with a response deadline of 29 August. 9 Characteristics Of 21st Century Learning. The label of “21st Century learning” is vague, and is an idea that we here at TeachThought like to take a swing at as often as possible, including: Psychological Science. Super Chefs and critics - Digital Literacy Cookbook. Special Edition: Digital Technologies in Learning Development. Reimagining learning for a post-digital world (part 1) – Solutions not problems.

Editorial: Scholarship and literacies in a digital age. Exploring Curation as a core competency in digital and media literacy education. Presentation-by-Jo-Parker. Consumer Electronics Daily News: Texting While Studying: New Study from McGraw-Hill Education Reveals That Technology Can Be Students' Best Friend and Worst Enemy. EDIF%202013. Brain Research: Three Principles for the 21st Century Classroom. ‘The only idiot in this room is me’ – Fisher makes red faced apology.