Introduction The concept of sex robots (often referred to as “sexbots”) and artificial sexuality has awoken discussions regarding the ethics of robotics. This has resulted in calls for increased legislation or the outlawing of these anthropomorphic adult products (Richardson, 2016Richardson, K. (2016). The asymmetrical 'relationship': Parallels between prostitution and the development of sex robots. ACM SIGCAS Computers and Society, 45(3), 290–293. doi: 10.1145/2874239.2874281 [Crossref], [Google Scholar]). This fear has been illustrated in a number of fictional human–robot engagements. Ethics of Artificial Intelligence and Robotics. 1. 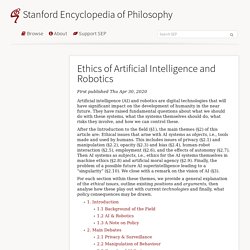 Introduction 1.1 Background of the Field The ethics of AI and robotics is often focused on “concerns” of various sorts, which is a typical response to new technologies. Many such concerns turn out to be rather quaint (trains are too fast for souls); some are predictably wrong when they suggest that the technology will fundamentally change humans (telephones will destroy personal communication, writing will destroy memory, video cassettes will make going out redundant); some are broadly correct but moderately relevant (digital technology will destroy industries that make photographic film, cassette tapes, or vinyl records); but some are broadly correct and deeply relevant (cars will kill children and fundamentally change the landscape).

The task of an article such as this is to analyse the issues and to deflate the non-issues. 1.2 AI & Robotics AI somehow gets closer to our skin than other technologies—thus the field of “philosophy of AI”. 1.3 A Note on Policy 2. Using intelligent personal assistants to assist the elderlies An evaluation of Amazon Alexa, Google Assistant, Microsoft Cortana, and Apple Siri. 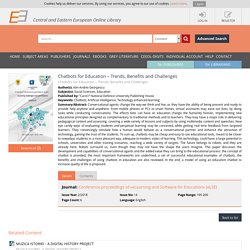 From mobile phones or PCs to smart homes, virtual assistants may ease our lives, by doing tasks while conducting conversations. The effects bots can have on education change the humanity forever, implementing new educational principles designed as complementary to traditional methods and to teachers. The rise of chatbots – new personal assistants in foreign language learning.

Abstract The creation and training of a smart conversational agent has long been a dream of the human race and a huge challenge for scientists and programmers. 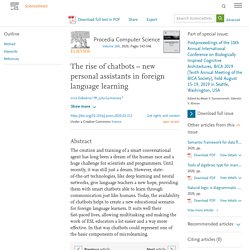 Until recently, it was still just a dream. A fully automated conversational agent for promoting mental well-being: A pilot RCT using mixed methods. 1. 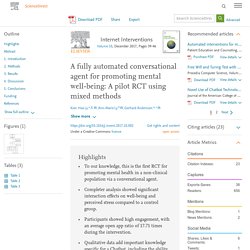 Introduction Over nearly two decades, researchers have gathered evidence to support the notion that rather simple cognitive and behavioural strategies, designed to mirror the thoughts and behaviours of naturally happy people, can help increase well-being, reduce negative symptoms and improve happiness (Bolier et al., 2013, Sin and Lyubomirsky, 2009, Weiss et al., 2016). By combining elements of positive psychology and cognitive behaviour therapy (CBT), this approach aims to increase the individual's engagement in meaningful and value-congruent behaviour, as well as in cognition focusing on the meaningful and valuable aspects of his or her life. This in turn is shown to translate into higher psychological well-being, increased levels of global life satisfaction and reduced stress levels (Bolier et al., 2013, Layous and Lyubomirsky, 2014).

Despite the many proven benefits of this type of self-help interventions, there are also significant problems related to the approach. Chatbots for Mental Health and Therapy – Comparing 5 Current Apps and Use Cases. According to the World Health Organization (WHO), the array of mental disorders include depression, bipolar affective disorder, schizophrenia and other psychoses, dementia, intellectual disabilities and developmental disorders including autism. 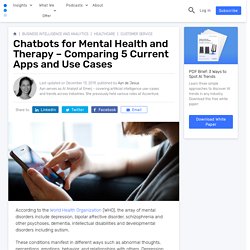 These conditions manifest in different ways such as abnormal thoughts, perceptions, emotions, behavior, and relationships with others. Depression alone affects more than 300 million people according to the WHO. Scientific American reports that the economic cost of depression in the US is in the hundreds of billions annually. Even with access to capable health care and social services, those afflicted with mental health conditions hesitate to avail of the treatment due to the stigma surrounding the illness. In response, technology companies have developed artificial intelligence applications for mobile phones that aim to be the first line of support for mental health patients, yet provide privacy and anonymity. Woebot. Robotic assistants in therapy and education of children with autism: can a small humanoid robot help encourage social interaction skills? 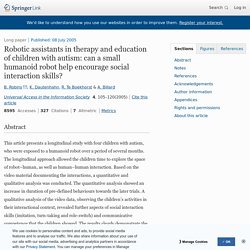 Chatbots for learning: A review of educational chatbots for the Facebook Messenger. 1. 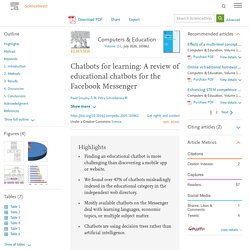 Introduction A chatbot is a software tool that interacts with users on a certain topic or in a specific domain in a natural, conversational way using text and voice. 1160f13e9771df3199b3684e085729110428. EDULEARN20 - TECHNICAL PROGRAM. Telaied whyaied. Full article: Teacherbot: interventions in automated teaching. Peer Review – Rodney Brooks. This blog is not peer reviewed at all. 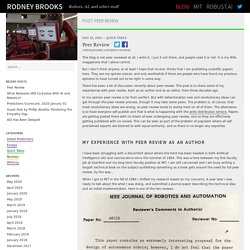 I write it, I put it out there, and people read it or not. It is my little megaphone that I alone control. But I don’t think anyone, or at least I hope that no-one, thinks that I am publishing scientific papers here. They are my opinion pieces, and only worthwhile if there are people who have found my previous opinions to have turned out to be right in some way. There has been a lot of discussion recently about peer review. In my opinion peer review is far from perfect. My Experience with Peer Review as an Author I have been struggling with a discomfort about where the herd has been headed in both Artificial Intelligence (AI) and neuroscience since the summer of 1984. When I got to MIT in the fall of 1984 I shifted my research based on my concerns. It was encouraging, but both it and a second review recommended that the paper not be published.

Brooks, R. Return of the chatbots. Natural Language Engineering. Crossref Citations This article has been cited by the following publications. 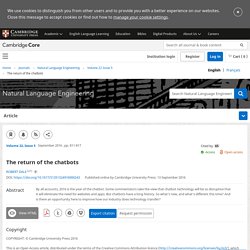 Mitsuku: “What do you call a chatbot that moves?” Respondent: “What?” Mitsuku: “A walkie-talkie.” OK, so it may not be the funniest joke in the world, but it is not bad for a 15-year-old piece of artificially intelligent coding. With around one third of the world population currently subject to self-isolation, the spectre of loneliness, which according to Cigna’s 2020 Loneliness Index regularly affects as many as three in five adult Americans, is looming large. Enter Mitsuku, or Kuki to her close friends. Using chatbots to aid transition: EBSCOhost. When will Alexa, Google Assistant, and other ‘chatbots’ finally talk to us like real people? Nearly every tech company worth its silicon now has a virtual assistant: Apple’s Siri, Amazon’s Alexa, Microsoft’s Cortana, and Google Assistant, among others.

What do these digital helpers—known as chatbots—have in store for us? Science talked with Alexander Rudnicky, a computer scientist at Carnegie Mellon University in Pittsburgh, Pennsylvania, who studies human-machine conversations, about what chatbots can and can’t do, how they learn from us, and whether we can prevent them from adopting our worst behaviors. This interview has been edited for brevity and clarity. Q: Let’s start with a pretty basic question. What is a chatbot? Chatbots for learning: A review of educational chatbots for the Facebook Me...: EBSCOhost.

Psychological, Relational, and Emotional Effects of Self-Disclosure After C...: EBSCOhost. Virtual Advising: EBSCOhost. Interactive Computing Technology in Anti-Bullying Education: The Effects of...: EBSCOhost. I Believe in a Thing Called Bot: Perceptions of the Humanness of "Chatbots": EBSCOhost. Promoting Learners' Voice Productions Using Chatbots as a Tool for Improvin...: EBSCOhost.

Research on Human-Computer Cooperative Teaching Supported by Artificial Intelligence Robot Assistant. Ethics of Artificial Intelligence and Robotics. 1. Introduction 1.1 Background of the Field The ethics of AI and robotics is often focused on “concerns” of various sorts, which is a typical response to new technologies. Many such concerns turn out to be rather quaint (trains are too fast for souls); some are predictably wrong when they suggest that the technology will fundamentally change humans (telephones will destroy personal communication, writing will destroy memory, video cassettes will make going out redundant); some are broadly correct but moderately relevant (digital technology will destroy industries that make photographic film, cassette tapes, or vinyl records); but some are broadly correct and deeply relevant (cars will kill children and fundamentally change the landscape).

The task of an article such as this is to analyse the issues and to deflate the non-issues. 1.2 AI & Robotics AI somehow gets closer to our skin than other technologies—thus the field of “philosophy of AI”. 1.3 A Note on Policy 2. Unlocking the Future of Learning by Redesigning Educator Learning. What I hear I forget, what I see I remember, what I do I know —Xunzi How do we cross the chasm between Now and Future? Creating the golden triangle of evidence‐informed education technology with EDUCATE - Cukurova - 2019 - British Journal of Educational Technology. EDUCATE is a London‐based programme that supports the development of research‐informed educational technology (EdTech), allowing entrepreneurs and start‐ups to create their products and services, and simultaneously grow their companies in a more evidence‐informed manner.

The programme partners businesses with researchers who mentor, guide and support this research journey, a key aspect of which is the evaluation of the company’s EdTech product or service. However, conducting impact evaluations of technology in education is challenging, particularly for early stage technologies, as rapid cycles of innovation and change are part of their essence.

Here, we present the pragmatic approach to evidence‐informed education technology design and impact evaluation, as developed and adopted by the EDUCATE programme. The research process is shaped by the core principles of evidence‐informed decision making detailed in the paper. The contributions of the paper are threefold. Posthuman. : AI steps up in battle against Covid-19. Image copyright Getty Images It feels as if a superhuman effort is needed to help ease the global pandemic killing so many. Artificial intelligence may have been hyped - but when it comes to medicine, it already has a proven track record. So can machine learning rise to this challenge of finding a cure for this terrible disease? There is no shortage of companies trying to solve the dilemma. Oxford-based Exscientia, the first to put an AI-discovered drug into human trial, is trawling through 15,000 drugs held by the Scripps research institute, in California.