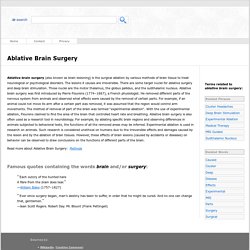 The lesions it causes are irreversible. There are some target nuclei for ablative surgery and deep brain stimulation. Those nuclei are the motor thalamus, the globus pallidus, and the subthalamic nucleus. People can die from giving up the fight. People can die simply because they've given up, life has beaten them and they feel defeat is inescapable, according to new research. 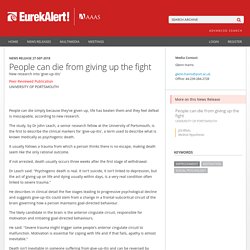 The study, by Dr John Leach, a senior research fellow at the University of Portsmouth, is the first to describe the clinical markers for 'give-up-itis', a term used to describe what is known medically as psychogenic death. It usually follows a trauma from which a person thinks there is no escape, making death seem like the only rational outcome. Baby boomers show concerning decline in cognitive functioning. In a reversal of trends, American baby boomers scored lower on a test of cognitive functioning than did members of previous generations, according to a new nationwide study. 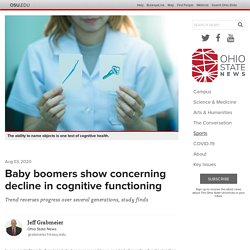 Findings showed that average cognition scores of adults aged 50 and older increased from generation to generation, beginning with the greatest generation (born 1890-1923) and peaking among war babies (born 1942-1947). Scores began to decline in the early baby boomers (born 1948-1953) and decreased further in the mid baby boomers (born 1954-1959). While the prevalence of dementia has declined recently in the United States, these results suggest those trends may reverse in the coming decades, according to study author Hui Zheng, professor of sociology at The Ohio State University. 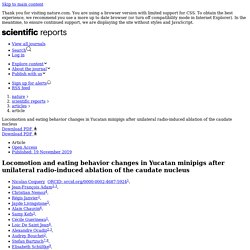 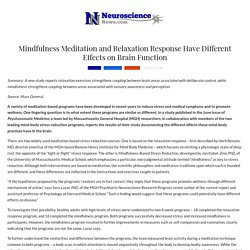 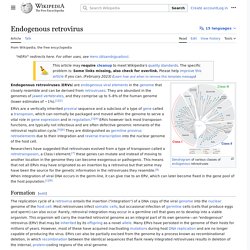 They are abundant in the genomes of jawed vertebrates, and they comprise up to 5–8% of the human genome (lower estimates of ~1%).[1][2] ERVs are a subclass of a type of gene called a transposon, which can be packaged and moved within the genome to serve a vital role in gene expression and in regulation.[3][4] They are distinguished as retrotransposons, which are Class I elements.[5] Researchers have suggested that retroviruses evolved from a type of transposable gene called a retrotransposon, which includes ERVs; these genes can mutate and instead of moving to another location in the genome they can become exogenous or pathogenic. 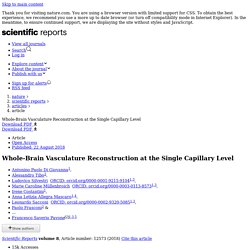 For neuronal and blood vessels imaging of the same brain, a two-months old transgenic (Thy1-GFP-M line) male mouse expressing the Green Fluorescent Protein (GFP) in sparse pyramidal neurons was used38. All experimental protocols involving animals were designed in accordance with the laws of the Italian Ministry of Health. All experimental protocols were approved by the Italian Ministry of Health. Blood-vessel lumen staining We used the protocol described in Tsai et al.21. Gel compositions. Hormones Stress and the Brain.

Paralyzed man regains use of arms and hands after experimental stem cell therapy at Keck Hospital of USC. September 7, 2016. 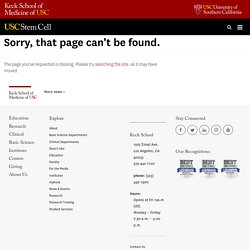 Why Didn’t She Get Alzheimer’s? The Answer Could Hold a Key to Fighting the Disease. “When you have delayed onset of Alzheimer’s by three decades, you say wow,” said Dr. 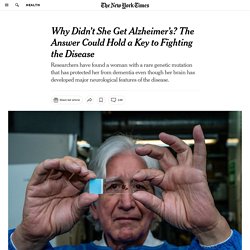 Bu, chairman of the neuroscience department at the Mayo Clinic in Jacksonville, Fla., who was not involved in the study. He said the research suggests that instead of drugs attacking amyloid or tau, which have failed in many clinical trials, a medication or gene therapy targeting APOE could be promising. Dr. Reiman, who led another newly published study showing that APOE has a bigger effect on a person’s risk of getting Alzheimer’s than previously thought, said potential treatments could try to reduce or even silence APOE activity in the brain. Untitled. Sex cells evolved to pass on quality mitochondria. A new brain mapping technique reveals circuitry of Parkinson’s disease tremors. Image Credit: Flickr/amy leonard If a piece of electronics isn’t working, troubleshooting the problem often involves probing the flow of electricity through the various components of the circuit to locate any faulty parts. 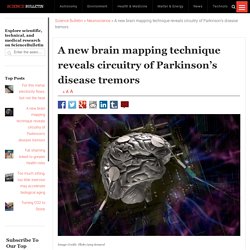 Deep Brain Stimulation off vs on. DBS electrically stimulates the brain to reduce effects of diseases such as depression and Par. The Cure For Fear. Klaver found it difficult to talk about her anxiety, even with her husband. Thinking back to the robbery left her feeling even more isolated and vulnerable. “The first seconds, you feel so very, very lonely,” she said. She resisted the idea of psychotherapy, with its long sessions devoted to reliving and processing the trauma. A comprehensive review of psychodynamic treatments for eating disorders. 2. Treasure J, Claudino AM, Zucker N (2010) Eating disorders. Lancet 375:583–593. doi:10.1016/S0140-6736(09)61748-7. Violent video games reduce brain response to violence, aggressive behavior. Scientists have known for years that playing violent video games causes players to become more aggressive. The findings of a new University of Missouri (MU) study provide one explanation for why this occurs: the brains of violent video game players become less responsive to violence, and this diminished brain response predicts an increase in aggression.

"Many researchers have believed that becoming desensitized to violence leads to increased human aggression. Until our study, however, this causal association had never been demonstrated experimentally," said Bruce Bartholow, associate professor of psychology in the MU College of Arts and Science. During the study, 70 young adult participants were randomly assigned to play either a nonviolent or a violent video game for 25 minutes. Johns Hopkins Neurology and Neurosurgery. The Prevalence Of Personality Disorders In The United States. An estimated 30.8 million American adults (14.8 percent) meet standard diagnostic criteria for at least one personality disorder as defined in the American Psychiatric Association's Diagnostic and Statistical Manual of Mental Disorders—Fourth Edition (DSM-IV), according to the results of the 2001-2002 National Epidemiologic Survey on Alcohol and Related Conditions (NESARC) reported in the current issue of the Journal of Clinical Psychiatry [Volume 65:948-958].