"Interviews with law enforcement officials, educators, researchers, students and a gunman’s mother, as well as a review of court documents, academic studies and the writings of killers and would-be killers, show that the school-shooting copycat syndrome has grown more pervasive and has steadily escalated in recent years.

And much of it can be traced back to the two killers at Columbine, previously ordinary high school students who have achieved dark folk hero status — their followers often known as “Columbiners” — in the corners of the internet where their carefully planned massacre is remembered, studied and in some cases even celebrated.

Investigators say school shootings have become the American equivalent of suicide bombings — not just a tactic, but an ideology. Young men, many of them depressed, alienated or mentally disturbed, are drawn to the Columbine subculture because they see it as a way to lash out at the world and to get the attention of a society that they believe bullies, ignores or misunderstands them."

Mass Shootings, the Media & American Terror w/ Dr. R. Defoster. 5/30/18 For ‘Columbiners,’ School Shootings Have a Deadly Allure. A Guide to Mass Shootings in America. In July 2012, in the aftermath of the movie theater massacre in Aurora, Colorado, Mother Jones created a first-of-its-kind open-source database documenting mass shootings in the United States. 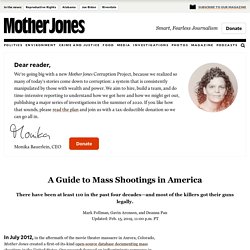 Our research focused on indiscriminate rampages in public places resulting in four or more victims killed by the attacker. We exclude shootings stemming from more conventionally motivated crimes such as armed robbery or gang violence. Other news outlets and researchers have since published larger tallies that include a wide range of gun crimes in which four or more people have been either wounded or killed. While those larger datasets of multiple-victim shootings are useful for studying the broader problem of gun violence, our investigation provides an in-depth look at a distinct phenomenon—from the firearms used and mental health factors to the growing copycat problem. Tracking mass shootings is complex; we believe ours is the most useful approach. US Mass Shootings, 1982-2019: Data From Mother Jones’ Investigation. Editor’s note: This database originally covered cases from 1982-2012 and has since been updated and expanded numerous times.

For analysis and context on this data—including how we built the database, and a change to the baseline for victim fatalities with cases dating from January 2013—see our Guide to Mass Shootings in America, which includes an interactive map documenting all of the cases. You can scan the underlying spreadsheet by clicking here and download the database in its entirety (in CSV format) by clicking here. 5/30/18: ‘You’ll All Know Who I Am,’ -Parkland Shooter Video. 5/19/18: New documents suggest Las Vegas shooter was conspiracy theorist. What’s the latest development in the Stephen Paddock story? 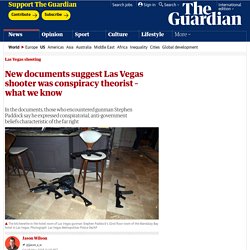 Stephen Paddock was the gunman who killed 58 people and wounded hundreds more last October, when he opened fire from the window of his room at the Mandalay hotel on the Las Vegas Strip. Yesterday, following legal action from news organizations, the Las Vegas police department released a trove of documents on the investigation, including statements from witnesses and victims. What did the document release tell us? Mostly the documents contain harrowing accounts from victims of Stephen Paddock’s shooting spree.

There is also an interview with Paddock’s wife. Mass Shootings in the United States: 2009-2017. Triple Entitlement and Homicidal Anger: An Exploration of the Intersectional Identities of American Mass Murderers. Conspiracy theory. An explanation of an event or situation that unnecessarily invokes a conspiracy A conspiracy theory is an explanation of an event or situation that invokes a conspiracy by sinister and powerful actors, often political in motivation,[2][3] when other explanations are more probable.[4] The term has a pejorative connotation, implying that the appeal to a conspiracy is based on prejudice or insufficient evidence.[5] Conspiracy theories resist falsification and are reinforced by circular reasoning: both evidence against the conspiracy and an absence of evidence for it, are re-interpreted as evidence of its truth,[5][6] and the conspiracy becomes a matter of faith rather than proof.[8] 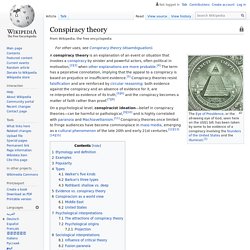 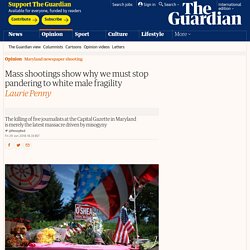 Whatever pageantry of violent intolerance is playing out in the news, liberals and women and people of colour must moderate our language so that certain sensitive Caucasian gentlemen in the room aren’t made uncomfortable. We must remember that their feelings matter. What do most of America's mass shootings have in common? White, male culprits. Mass Shooters All Different Except for 1 Thing: Most Are Men. Paddock Is a White Male Mass Shooter. That Makes Him Typical.

When we talk about mass shootings, we're talking about white men. President Trump is notorious for connecting acts of violence to race and faith, often blaming Muslims and people of color whenever tragedy plays out across the world. 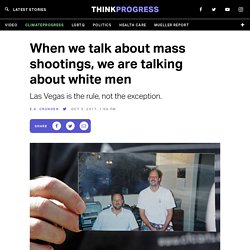 That default response, however, tripped up both the president and other elected officials this week, after a 64-year-old white male U.S. citizen allegedly opened fire on a crowded concert in Las Vegas, Nevada late Sunday evening, killing at least 59 people injuring more than 500. The incident horrified much of the country and left the people of Las Vegas grieving and searching for answers.

Much of the coverage following the tragedy centered on the identity of the alleged attacker, Stephen Paddock, with many commentators remarking on his supposedly unique profile: a quiet, lone white man whose family and friends were shocked by his actions. Paddock, they claimed, simply didn’t fit the profile of an alleged mass murderer. A 2013 study at the University of Washington noted:

America has silently accepted the rage of white men. In fact, America has been here 273 times in 2017 alone, according to the Gun Violence Archive, which compiles deaths and injuries from shooting incidents and defines a mass shooting as any incident where four or more people are wounded or killed. 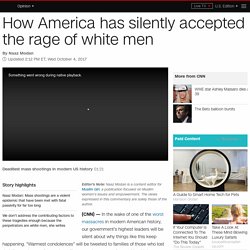 According to their tally, there have also been 11,698 deaths as a result of gun violence so far this year. Between 2001 and 2014, 440,095 deaths by firearms occurred on US soil, while deaths by terrorism during those years numbered 3,412. Today, America faces approximately one mass shooting per day on average. Why Most Mass Murderers Are Privileged White Men. Columbine High School massacre. School shooting at Columbine High School in Columbine, Colorado, United States on April 20, 1999 The two perpetrators injured 21 additional people with gunshots and also exchanged gunfire with the police. 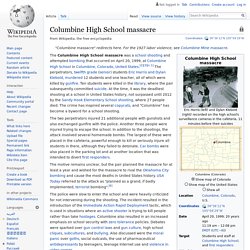 Another three people were injured trying to escape the school. In addition to the shootings, the attack involved several homemade bombs. The largest of these were placed in the cafeteria, powerful enough to kill or seriously injure all students in there, although they failed to detonate. Car bombs were also placed in the parking lot and at another location that was intended to divert first responders. The motive remains unclear, but the pair planned the massacre for at least a year and wished for the massacre to rival the Oklahoma City bombing and cause the most deaths in United States history. Background AOL website Harris's site attracted few visitors and caused no concern until March 1998. Van incident. Tree of Life Synagogue shooting. Christchurch mosque shooting. 6/28/18: Boston Globe Shooting. Heather Heyer, victim of Charlottesville car attack, was civil rights activist.

The woman who died when a car rammed into a group of people protesting against a white supremacist rally in Charlottesville was named on Sunday as Heather Heyer, a 32-year-old legal assistant with a law firm in Virginia, who repeatedly championed civil rights issues on social media. 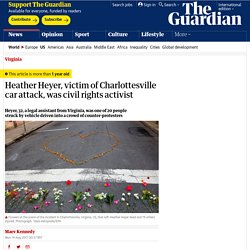 Heyer, whose Facebook cover photo read: “If you’re not outraged, you’re not paying attention”, worked for the Virginia law firm Miller Law and regularly drew attention to cases of police malpractice and racism, as well as posting her support for Bernie Sanders in his presidential campaign. En Memoria.