Open Educational practice. Alliance Policy Using evidence v4. Sci-Hub: removing barriers in the way of science. Why scientists are fighting back. We’ve had enough of Trump’s war on facts. Next Saturday, in Washington, DC, and in hundreds of rallies around the world, scientists and their supporters will stage what is likely to be the largest gathering of its kind in history. 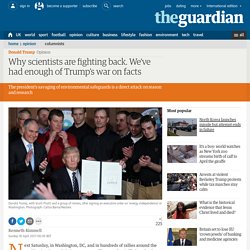 The March for Science, an idea hatched by a few enthusiastic people on Reddit, has mobilised scientists and their supporters as never before. As a colleague observed: “You know you’re in trouble when scientists take to the streets.” He’s right. I’ve worked closely with scientists for decades and, by training and temperament, they tend to be happiest in the lab, testing and retesting experiment results – among the last groups of people you might expect to find protesting. So, why are they grabbing placards now? Nowhere is the attack more ferocious than on the issue of global warming, where the Trump administration has taken a wrecking ball to the modest but important policies put in place by President Obama. There is nothing subtle about Trump’s antipathy to science. Comments will be switched on later. How and why academics should engage with social media - Pickle Jar. We’ve talked in the past about how you can experiment with social media and bring your activity together to find out what works for you and your audience. 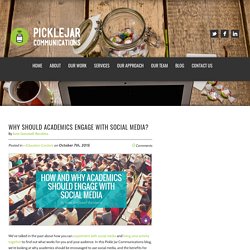 In this Pickle Jar Communications blog, we’re looking at why academics should be encouraged to use social media, and the benefits for them, their students and their institutions. Earlier this week, Jisc, the charity championing digital technology in education and research, named its top 50 UK higher education social media influencers. The list spans those using social media in varying and innovative ways. There are those such as Lee Dunn and the Glasgow University Student Teacher Network, using social media to develop teaching and learning networks, to others conducting whole modules, research and assessment through social media itself, such as Lisa Harris’ module at the University of Southampton, Living and Working on the Web. Letting them loose on the world Academics are a university’s strongest asset. Keynote: Maha Bali – Hiding in the Open Home : #OER17. European Commission considering leap into open-access publishing. 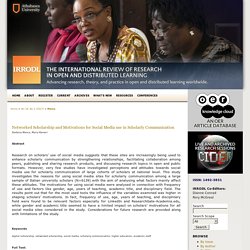 Web of science. 99 Serious Twitter Tips for Academics. By Staff Writers Twitter’s popularity has soared recently, and for good reason. 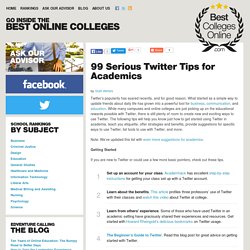 What started as a simple way to update friends about daily life has grown into a powerful tool for business, communication, and education. While many campuses and online colleges are just picking up on the educational rewards possible with Twitter, there is still plenty of room to create new and exciting ways to use Twitter.

The following tips will help you know just how to get started using Twitter in academia, teach you etiquette, offer strategies and benefits, provide suggestions for specific ways to use Twitter, list tools to use with Twitter, and more. Note: We’ve updated this list with even more suggestions for academics. » Social media for academics and the increasing toxicity of the online ecology The Sociological Imagination. In the last few months, I’ve begun to seriously plan a much more sophisticated follow-up to Social Media for Academics, investigating the implications of social media for academic labour. 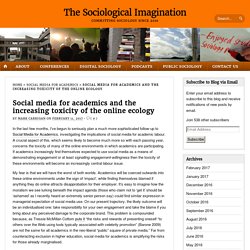 A crucial aspect of this, which seems likely to become much more so with each passing year, concerns the toxicity of many of the online environments in which academics are participating. If academics increasingly find themselves expected to use social media as a means of demonstrating engagement or at least signalling engagement-willingness then the toxicity of these environments will become an increasingly central labour issue. My fear is that we will have the worst of both worlds. Social media for research dissemination. Social Media and Digital Scholarship for Academic Research. 22 March 2017, from 1000 to 1630 The Cedars, University of Reading, UK. 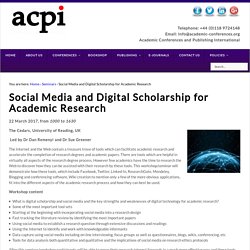 The Digital Scholar – An analogue academic making her way in the digital world. Google@Brookes Mail Blogging for academia. Book Review: Being a Scholar in the Digital Era: Transforming Scholarly Practice for the Public Good by Jessie Daniels and Polly Thistlethwaite. Enhancing your Academic online presence using LinkedIn. Opening up Education: A Support Framework for Higher Education Institutions. Open access: six myths to put to rest. Open access to academic research has never been a hotter topic. 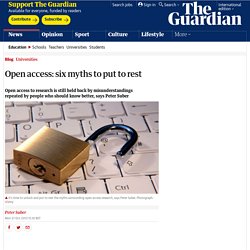 But it's still held back by myths and misunderstandings repeated by people who should know better. The good news is that open access has been successful enough to attract comment from beyond its circle of pioneers and experts. The bad news is that a disappointing number of policy-makers, journalists and academics opine in public without doing their homework.

Here, at the start of the sixth global Open Access Week, are the six most common and harmful misunderstandings about open access: 1) The only way to provide open access to peer-reviewed journal articles is to publish in open access journals. Topic 2: Managing your online identity - UOSM 2033 UOSM 2033. Please read these brief notes and check out the links, before preparing and posting your answer to the set question. 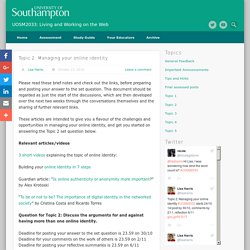 This document should be regarded as just the start of the discussions, which are then developed over the next two weeks through the conversations themselves and the sharing of further relevant links. These articles are intended to give you a flavour of the challenges and opportunities in managing your online identity, and get you started on answering the Topic 2 set question below. Relevant articles/videos. Opendistanceteachingandlearning. Image credit: Nowadays when someone asks me whether I blog, I am tempted to say “I used to blog, but not anymore” but then the next question would be “So, why did you stop blogging?” 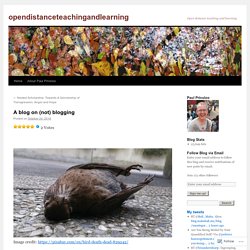 And that, my dear readers, is what this blog is about. In future I can just refer those who ask the question “Why have you not blogged recently?” The A to Z of social media for academia. Why should academics be using social media? 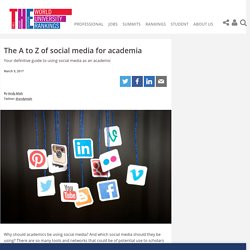 And which social media should they be using? There are so many tools and networks that could be of potential use to scholars that it can be difficult to keep track. Times Higher Education has teamed up with Andy Miah, chair in science communication and future media at the University of Salford, to offer you the definitive guide to the social media tools available to academics, and how you can use them as you go about your scholarly work. Home - Digital Scholarship Research Guide - Library Guides at University of Washington Libraries. Social Media and Digital Scholarship for Academic Research. Digital Scholar course. I may not have mentioned it, but I wrote a book called The Digital Scholar a few years back. It was published under a CC licence by Bloomsbury Academic. TDS_1 - OpenLearn - Open University - TDS_1.

A classic from @PHDcomics for #seriousacademic. Journal of Applied Social Theory. How do students access the resources they need? Survey finds only one in five obtain all resources legally. Laura Czerniewicz presents an overview of findings from a study on the practices of university students accessing learning resources at a research-intensive university in South Africa.

There is a grey zone in the access of resources that is now simply part of normal life in a new communication and information order. The students’ perspectives raise critical issues for new models of publishing, for digital literacies and for open scholarship. Academic textbooks are expensive and the cost of textbooks globally has continued to rise alarmingly even as other educational resources have become relatively cheaper. For students, open educational resources should make more sense – certainly financially. But, globally, the uptake of such resources is low. So how do students access the resources they need? This study concentrated on students at one of South Africa’s top research-intensive universities. What we found Here are a few key findings from the survey: Principled pragmatism. Becoming a Digital Scholar Plan. Investigar lo investigado. P48. Research Paper, Networked Learning Conference 2016 - NLC2016, Lancaster University UK.

How to write a blogpost from your journal article in eleven easy steps. You’ve just published a research article – why should you bother writing a blog post about it? Patrick Dunleavy argues that if you’ve devoted months to writing the paper, dealing with comments, doing rewrites and hacking through the publishing process, why would you not spend the extra couple of hours crafting an accessible blogpost? Enhancing your Academic online presence using LinkedIn.

Reading List: Using Social Media for Research Collaboration and Public Engagement. Workspace. Society for Research into Higher Education. The professional work of academics has radically transformed over the last two decades through digitisation. These changes have engendered different kinds of practices of knowledge production, distribution, and, more broadly, academic identity formation. As academic professional success is often measured against these practices, exploring the challenges faced by new and established researchers is key to understanding what the ‘digital university’ portends for the academic workforce and for scholarly work. This one-day event will bring together a group of scholars to discuss the impact of digitisation on academic working life and academic identity, including PhD students and early career researchers. The three speakers draw from their own, uniquely different, research contexts to offer new and critical perspectives on this current topic, with plenty of opportunities for participants to join in the discussions.

Session 1: Dr. Session 2: Dr. Dr. Scholarly behaviour and evaluation criteria: Uncovering the superficial characteristics that lead to higher citations. Do scholars adjust their publication behaviour depending on the criteria used in their evaluation? Maarten van Wesel presents findings showing how the publishing behaviour of scholars changed when evaluation switched from emphasising ‘publish-or-perish’ to impact factors. Whilst this may suggest a shift from quantity to quality, the number of citations a paper receives not only depends on its scholarly value, but also on seemingly superficial characteristics of a paper. Being open and networked – benefits and ways forward. I recently completed H818 which, assuming all goes well with marking, will be my final module in the MA in Online & Distance Education (MAODE).

Philosophical Disquisitions: Can blogging be academically valuable? Seven reasons for thinking it might be. I have been blogging for nearly five years (hard to believe). From Jennifer Kendall (h818) BishopBlog: Blogging as post-publication peer review: reasonable or unfair? In a previous blogpost, I criticised a recent paper claiming that playing action video games improved reading in dyslexics. In a series of comments below the blogpost, two of the authors, Andrea Facoetti and Simone Gori, have responded to my criticisms. Can Tweets Predict Citations? Metrics of Social Impact Based on Twitter and Correlation with Traditional Metrics of Scientific Impact. This paper is in the following e-collections/theme issues: How the internet changed career: framing the relationship between career development and online technologies - University of Derby Online Research Archive. Hdl Handle: Research impact: Altmetrics make their mark : Naturejobs. Creating An Academic Profile Online and Networking With Others - Careers Advice.

With a 40% cut in funding for Higher Education expected from central government over the next 4-5 years, and the tightening up of departmental budgets, academic, jobs will inevitably be lost. Don’t despair, because now may be the best time to raise your academic profile. Using Twitter for Curated Academic Content. 7 ways to make your Google Scholar Profile better. Twitter. Prevalence and use of Twitter among scholars. Our new report on Educational Resources and Copyright Exceptions and Limitations. Are 90% of academic papers really never cited? Reviewing the literature on academic citations.