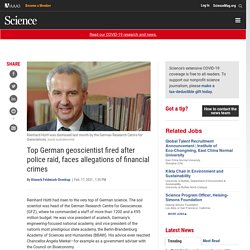 The soil scientist was head of the German Research Centre for Geosciences (GFZ), where he commanded a staff of more than 1200 and a €95 million budget. He was vice president of acatech, Germany’s engineering-focused national academy, and vice president of the nation’s most prestigious state academy, the Berlin-Brandenburg Academy of Sciences and Humanities (BBAW). His advice even reached Chancellor Angela Merkel—for example as a government adviser with the Council on Bioeconomy. Authors of meta-analysis on heart disease retract it when they realize a NEJM reference had been retracted. The authors of a meta-analysis on predicting cardiovascular disease have retracted the paper because it included a study that was retracted between the time they submitted their article and the date it was published. 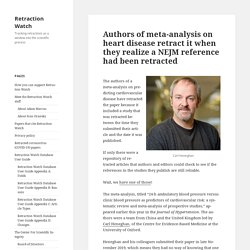 If only there were a repository of retracted articles that authors and editors could check to see if the references in the studies they publish are still reliable. Alchemical Promise, the Fraud Narrative, and the History of Science from Below: A German Adept’s Encounter with Robert Boyle and Ambrose Godfrey: Ambix: Vol 0, No 0. Authors retract Nature paper after realizing some data were “calculated wrongly” A group of authors at Nagoya University and Kyoto University have retracted a 2019 Nature paper because of errors. 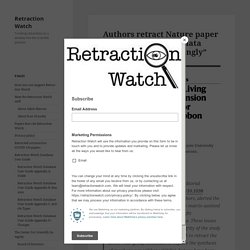 Publisher infected twice with the same anti-vaccine article. Researchers who lost a paper derided by critics as anti-vaccine have republished their article in a different journal … owned by the same publisher (hint: rhymes with “smells of beer”). 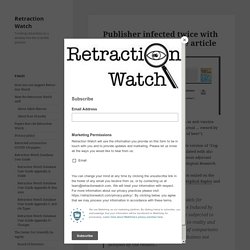 As we reported in April 2019, the original article version of “Cognition and behavior in sheep repetitively inoculated with aluminum adjuvant-containing vaccines or aluminum adjuvant only” appeared in November 2018 in Pharmacological Research. Antivaccine advocates such as Celeste McGovern seized on the study, which also drew harsh criticism from Skeptical Raptor and Orac, who called it. Contradicting statements cast doubts on Chinese raw data.

On February 3rd, 2020, researchers at the Wuhan Institute of Virology published their first article on the SARS-CoV-2 virus. 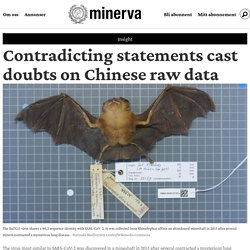 In the article “A pneumonia outbreak associated with a new coronavirus of probable bat origin”, the Wuhan researchers Zhou et al. compare the SARS-CoV-2 virus with other known viruses. Zhou et al also published the sequence of a hitherto completely unknown virus, called RaTG13, which is 96.2 percent identical to SARS-CoV-2 virus. The article has already been cited 3261 times, and is undoubtedly one of the most influential scientific publications in 2020. Among the articles that builds upon the research published by the Wuhan Institute of Virology, and more specifically the RaTG13 sequence, is the article “The proximal origin of SARS-CoV-2” by Kristian Andersen et al.

Unconsented acknowledgments as a form of authorship abuse: What can be done about it? - Mladen Koljatic, 2020. Abuses in authorship, such as redundant publication, ghost authorships, and coerced or hostage authorship, have received well-deserved attention lately (Bülow and Helgesson, 2018; Tang, 2018; Tarkang et al., 2017). 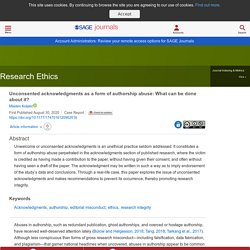 Although less conspicuous than forms of gross research misconduct—including falsification, data fabrication, and plagiarism—that garner national headlines when uncovered, abuses in authorship appear to be common and pervasive (De Vries et al., 2006). Concerns about authorship in scholarly publications, that is, who does and does not merit to be considered an author, have been around for decades (Street et al., 2010). The increase in the number of authors per paper became a matter of serious concern in the early 1990s (Rennie and Flanagin, 1994), and continues to be so today. The acknowledgments section in published research may appear to be quite harmless, included as a courtesy, to thank those who provided help during the research or writing process (Day and Gastel, 2011). Unconsented acknowledgments as a form of authorship abuse: What can be done about it? - Mladen Koljatic, 2020. 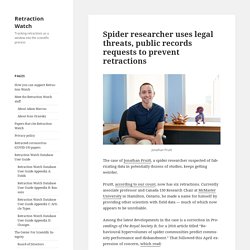 Pruitt, according to our count, now has six retractions. Currently associate professor and Canada 150 Research Chair at McMaster University in Hamilton, Ontario, he made a name for himself by providing other scientists with field data — much of which now appears to be unreliable. Authors retract highly cited 2014 Science paper. The authors of a 2014 paper in Science have retracted it, after becoming aware that impurities in the chemicals they used for their experiments may have generated the apparent findings. 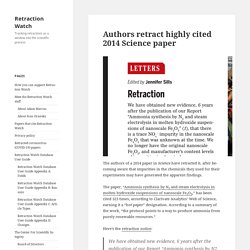 We no longer have the original nanoscale Fe2O3, and manufacturer’s content levels of impurities in chemicals may vary over time. Top chemistry journal retracts paper for faked data. Let me get this straight: You added a bunch of co-authors without their consent, and you couldn’t be bothered to include me? This retraction reminds us of an old joke about food in the Borscht Belt resorts: It’s terrible, and such small portions! 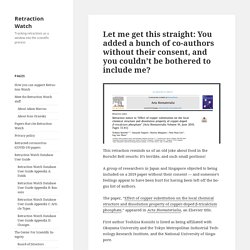 A group of researchers in Japan and Singapore objected to being included on a 2019 paper without their consent — and someone’s feelings appear to have been hurt for having been left off the bogus list of authors. The paper, “Effect of copper substitution on the local chemical structure and dissolution property of copper-doped β-tricalcium phosphate,” appeared in Acta Biomaterialia, an Elsevier title. First author Toshiisa Konishi is listed as being affiliated with Okayama University and the Tokyo Metropolitan Industrial Technology Research Institute, and the National University of Singapore. According to the retraction notice: Dr. 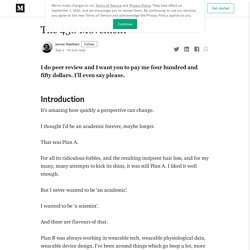 I’ll even say please. It’s amazing how quickly a perspective can change. I thought I’d be an academic forever, maybe longer. Integrating Integrity: The Organizational Translation of Policies on Research Integrity. Bouter, L. (2020). What research institutions can do to foster research integrity. Science and Engineering Ethics. Google Scholar Callaway, E. (2012). Danish neuroscientist challenges fraud findings. Nature. University of Kentucky demotes cancer researcher following finding of misconduct by scientist in his lab. A misconduct scandal at the University of Kentucky has led to the demotion of a senior cancer researcher for his lack of oversight of a now-former scientist who fabricated data in at least four papers and two grant applications. According to the university, the inquiry began in April 2019, after the institution received complaints about suspect figures in six papers published by UK researchers.

The lead on the articles was John D’Orazio, a clinician and researcher with appointments at the Markey Cancer Center and UK Healthcare. In November 2019, UK investigators turned their attention to Stuart Jarrett, a co-author on all six papers who had joined D’Orazio’s lab in 2012 but left in September 2019. According to the university: It was determined that Dr. The report on the inquiry states that:

Don’t be a prig in peer review. I very much enjoy being a peer reviewer. Reviewing manuscripts allows me to stay up to date on the most-current research in my field, and I feel a sense of accomplishment when helping authors to effectively disseminate their science. However, I have been discouraged by some comments from fellow reviewers that I’ve seen relayed to authors. Multiple reviews, which were shared with all reviewers, were rife with unnecessary, personal comments that merely served as subjective criticisms of the authors’ competencies, rather than as constructive assessment of the research.

One comment went as far as implying that the authors themselves were illogical and unintelligent. The process of peer review is meant to be highly critical. Although some journals redact ad hominem reviewer comments, many do not, and authors commonly receive them. These comments can slow down the publishing process. Journal editor breaks protocol to thank an anonymous whistleblower. As Retraction Watch readers may recall, we’ve been highlighting — and championing — the work of anonymous whistleblowers throughout the 10-year history of the blog. Our support for such anonymity, however, is not universally shared.

San Francisco is about 7,800 miles from Lagos, and the list of authors — Sam Brownstone, Alison Connor and Daniel Stein, a former economist at the World Bank — seemed suspiciously devoid of Nigerian names. A mystery: How did this team plagiarize an unpublished paper? French university rescinds researcher’s PhD after misconduct finding. Scientific Journal Pulls Over a Dozen Papers by Chinese Researchers. Defining and Handling Research Misconduct: A Comparison Between Chinese and European Institutional Policies - Dan Li, Gustaaf Cornelis, 2020. “Where there are girls, there are cats” returns, with a new title. 2006.16437. Indexer “obviously made a mistake” in sanctioning taxonomy journal, says editor. Red Flags Raised Over Chinese Research Published in Global Journals.

The case of the stolen journal. Physics journal removes study for breach of confidentiality. A physics journal has retracted a 2016 study after learning that the author published it without the knowledge or permission of the funder, which had a confidentiality agreement in place for the work. According to the retraction notice in Applied Physics Letters, the paper also lifted content from other researchers without due credit.

Given the “legal issue” associated with the breach of confidentiality, the journal has decided to remove the paper entirely. The “results should not be published:” Company confidentiality agreement squashes two insecticide papers. West Virginia University biologists have retracted two papers on insecticides for fruit pests due to a confidentiality agreement with a chemical manufacturer stating that the “results should not be published.” Former Harvard researcher who sexually harassed postdoc sparks turmoil at Italian institute. Top European hospitals deny providing data for retracted Covid-19 research. An influential osteoporosis study is “likely fraudulent” — but not retracted.

Plagiarism costs author five papers in five different journals. A two-year drama: The anatomy of a retraction request. Major indexing service sounds alarm on self-citations by nearly 50 journals. Journal calls 2012 paper “deeply offensive to particular minorities” Editors in chief past and present apologize for publishing article that “feed[s] into racist narratives” The peer review crisis. And then there were six: three more retractions for Japanese anesthesiologist. 2006.07849. A Wiley journal makes another article disappear. There is no I in data: Former grad student has paper retracted after mentor objects.