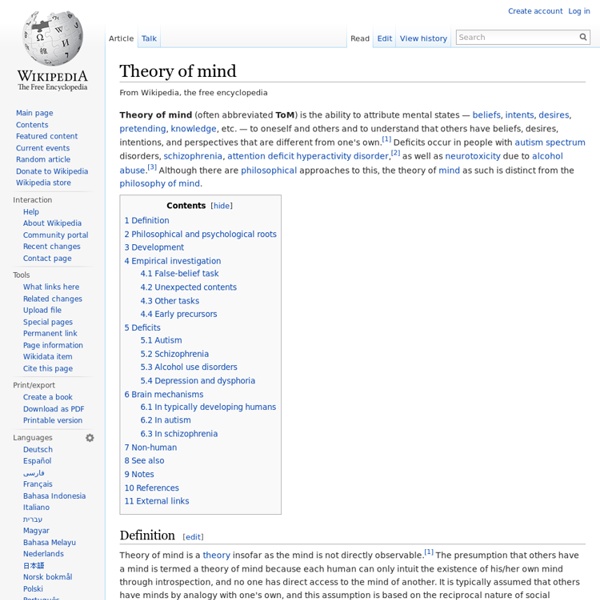 Definition[edit] Theory of mind is a theory insofar as the mind is not directly observable.[1] The presumption that others have a mind is termed a theory of mind because each human can only intuit the existence of his/her own mind through introspection, and no one has direct access to the mind of another. It is typically assumed that others have minds by analogy with one's own, and this assumption is based on the reciprocal nature of social interaction, as observed in joint attention,[4] the functional use of language,[5] and the understanding of others' emotions and actions.[6] Having a theory of mind allows one to attribute thoughts, desires, and intentions to others, to predict or explain their actions, and to posit their intentions. Theory of mind appears to be an innate potential ability in humans; one requiring social and other experience over many years for its full development. Different people may develop more, or less, effective theories of mind. Development[edit] Autism[edit]

Savant syndrome Savant syndrome is a condition in which a person with a mental disability, such as an autism spectrum disorder, demonstrates profound and prodigious capacities or abilities far in excess of what would be considered normal.[1][2][3] People with savant syndrome may have neurodevelopmental disorders, notably autism spectrum disorders, or brain injuries. The most dramatic examples of savant syndrome occur in individuals who score very low on IQ tests, but not always. In some very rare and extreme cases, some people with savant actually had an average to even a higher IQ while demonstrating exceptional skills or brilliance in specific areas, such as rapid calculation, art, memory, or musical ability.[4][5][6][7] In spite of the name "syndrome", it is not recognized as a mental disorder nor as part of mental disorder in medical manuals such as the ICD-10[8] or the DSM-V.[9] Characteristics[edit] Mechanism[edit] Savant syndrome is poorly understood. Epidemiology[edit] History[edit] See also[edit]

American Psychological Association (APA) 10 Ways Our Minds Warp Time How time perception is warped by life-threatening situations, eye movements, tiredness, hypnosis, age, the emotions and more… The mind does funny things to our experience of time. Just ask French cave expert Michel Siffre. In 1962 Siffre went to live in a cave that was completely isolated from mechanical clocks and natural light. When he tried to measure out two minutes by counting up to 120 at one-second intervals, it took him 5 minutes. But you don’t have to hide out in a cave for a couple of months to warp time, it happens to us all the time. 1. People often report that time seems to slow down in life-threatening situations, like skydiving. But are we really processing more information in these seconds when time seems to stretch? To test this, Stetson et al. (2007) had people staring at a special chronometer while free-falling 50 metres into a net. 2. We’ve all experienced the fact that time seems to fly when we’re having fun. 3. 4. 5. 6. 7. 8. 9. 10. Time is relative

Definition 10 Most Fascinating Savants in the World Sometimes the most amazing abilities of the human brain are revealed exactly when things go wrong with it. Take, for example, savants - people who have mental abilities that could only be characterized as superhuman (like having photographic memory, playing music perfectly after hearing it just once, or doing complex mathematical calculations in one's head) but otherwise severely disabled in every day cognitive functions and social interaction. Does the human brain have latent savant-like abilities? Does our higher cognitive functions somehow block these abilities, and why? And can we have savant-like abilities without the accompanying autism and/or developmental disabilities? Most savants are born with their abilities (and unfortunately, their developmental disorders), but not all: severe brain injuries can, in very rare instances, cause savant-like abilities to surface (see, for example: The Case of the "Sudden" Savant). 1. Kim Peek was born with severe brain damage. 2. [YouTube clip]

15 styles of Distorted Thinking 15 styles of Distorted Thinking Filtering: You take the negative details and magnify them while filtering out all positive aspects of a situation. Polarized Thinking: Things are black or white, good or bad. You have to be perfect or you're a failure. There is no middle ground. Checklist for Hidden Anger Procrastination in the completion of imposed tasks. Consciousness Representation of consciousness from the seventeenth century At one time consciousness was viewed with skepticism by many scientists, but in recent years it has become a significant topic of research in psychology, neuropsychology and neuroscience. The primary focus is on understanding what it means biologically and psychologically for information to be present in consciousness—that is, on determining the neural and psychological correlates of consciousness. The majority of experimental studies assess consciousness by asking human subjects for a verbal report of their experiences (e.g., "tell me if you notice anything when I do this"). Etymology and early history[edit] John Locke, British philosopher active in the 17th century A related word was conscientia, which primarily means moral conscience. In the dictionary[edit] Philosophy of mind[edit] The philosophy of mind has given rise to many stances regarding consciousness. The coherence of the concept[edit] Types of consciousness[edit]

Theory of Mind Theory of Mind is the branch of cognitive science that investigates how we ascribe mental states to other persons and how we use the states to explain and predict the actions of those other persons. More accurately, it is the branch that investigates mindreading or mentalizing or mentalistic abilities. These skills are shared by almost all human beings beyond early childhood. They are used to treat other agents as the bearers of unobservable psychological states and processes, and to anticipate and explain the agents’ behavior in terms of such states and processes. Both theory-theory and simulation-theory are actually families of theories. Finally, the claim─common to both theorists of theory and theorists of simulation─that mindreading plays a primary role in human social understanding was challenged in the early 21st century, mainly by phenomenology-oriented philosophers and cognitive scientists. Table of Contents 1. a. b. c. The inside access view comes in various forms. 2. a. b. 3.

The Rain Man's Disorder: Savant Syndrome The 1988 movie Rain Man introduced people to a rare but amazing disorder called savant syndrome. In the movie, Dustin Hoffman sensitively portrays the character Raymond Babbitt, who has autistic disorder. When Raymond's brother, Charlie, comes to visit, he discovers that Raymond also has an astounding memory for baseball statistics, the phone book, and the ability to count cards in Las Vegas. Occurs with brain dysfunction Savant syndrome is extremely rare. People with autistic disorder, developmental disability, or mental retardation may be born with it. It can also develop later in childhood or even adulthood after a brain injury or with a certain type of dementia. Range of skills All people with savant syndrome have an amazing memory that is very focused in one area. Formerly called idiot savant People with savant syndrome were described in the medical literature as early as 1751, but the name "idiot savant" was not applied until 1887, when Dr.

Mind A phrenologicalmapping[1] of the brain. Phrenology was among the first attempts to correlate mental functions with specific parts of the brain. A mind /ˈmaɪnd/ is the set of cognitive faculties that enables consciousness, perception, thinking, judgement, and memory—a characteristic of humans, but which also may apply to other life forms.[3][4] A lengthy tradition of inquiries in philosophy, religion, psychology and cognitive science has sought to develop an understanding of what a mind is and what its distinguishing properties are. Important philosophers of mind include Plato, Descartes, Leibniz, Kant, Martin Heidegger, John Searle, Daniel Dennett and many others. Etymology[edit] The original meaning of Old English gemynd was the faculty of memory, not of thought in general. The meaning of "memory" is shared with Old Norse, which has munr. Definitions[edit] Which attributes make up the mind is much debated. Mental faculties[edit] Mental content[edit] Memetics[edit] Relation to the brain[edit]

How is theory of mind useful? Perhaps to enable social pretend play | Psychology It is often claimed that theory of mind (ToM) is facilitated by pretend play (PP), or by a particular type of PP, social pretend play (SPP). Here we challenge that view, proposing instead that ToM might be useful for driving SPP, rather than the reverse. We discuss background theory, review pertinent studies, and explain why the “ToM first” view is at least equally likely. The first form of pretend to consider is solitary PP, emerging at 12–18 months, in which one engages in three basic types of transformation: substitutes one object for another, projects imaginary characteristics onto objects, and imagines situations that do not exist (Leslie, 1987). There is a fundamental similarity, or isomorphism (Leslie, 1987), between PP and ToM. Hence it is possible that PP engenders ToM by giving children practice at projecting representations that differ from reality onto that reality. This brings us to the second type of PP, social PP. Conflict of Interest Statement Acknowledgments References

Theory of mind - an overview | ScienceDirect Topics “Theory of Mind”: Empathy “Theory of mind” is the ability of an individual to infer the feelings, motives, opinions, and emotions of another on the basis of that other’s expressions, however fragmentary or incomplete these may be. It is an indispensable ability for meaningful social interaction. Clearly, theory of mind (also designated by the acronym ToM) is closely related to empathy, which ToM can be said to include. Empathy refers specifically, however, to affective understanding (“emotional resonance”), whereas ToM in general extends beyond affect to include cognition. Prefrontal lesions are now well known to commonly impair ToM. Large prefrontal lesions impair both components of ToM, affective and cognitive, but lesions of orbitofrontal/ventromedial cortex impair mainly the affective, empathic component (Stone et al., 1998; Rowe et al., 2001; Shamay-Tsoory et al., 2004, 2005; Leopold et al., 2012).

Critical Thinking and Emotional Intelligence In addition to Goleman’s lack of sensitivity to the brain-to-mind translation problem, and his failure to acknowledge that we already know much about the mind through its works and constructs, Goleman’s work is often inconsistent and sometimes incoherent. Let us look at some cases. Two Brains Equals Two Minds Because Goleman’s “theory” of mind is based strictly on his interpretations of data from brain research, he comes to some questionable conclusions about the mind. For example, he states, “sensory signals from eye or ear travel first in the brain to the thalamus and then — across a single synapse — to the amygdala; a second signal from the thalamus is routed to the neocortex — the thinking brain. Based on this description of brain activity (and other similar descriptions), he concludes " . . . we have two minds, one that thinks and one that feels . . . For either we grant that the amygdala has some cognitive capacity, or that it has none. Otherwise all emotions would be identical.