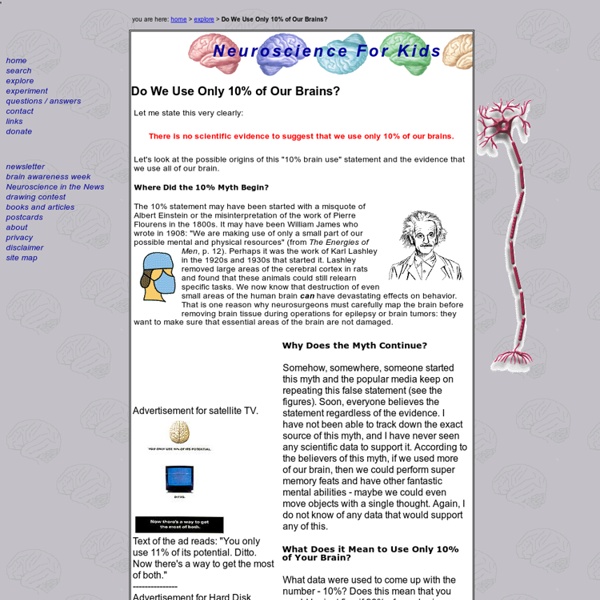 Let me state this very clearly: There is no scientific evidence to suggest that we use only 10% of our brains. Let's look at the possible origins of this "10% brain use" statement and the evidence that we use all of our brain. Where Did the 10% Myth Begin? The 10% statement may have been started with a misquote of Albert Einstein or the misinterpretation of the work of Pierre Flourens in the 1800s. Perhaps it was the work of Karl Lashley in the 1920s and 1930s that started it. The Evidence (or lack of it) Perhaps when people use the 10% brain statement, they mean that only one out of every ten nerve cells is essential or used at any one time? Furthermore, from an evolutionary point of view, it is unlikely that larger brains would have developed if there was not an advantage. Finally, the saying "Use it or Lose It" seems to apply to the nervous system. So next time you hear someone say that they only use 10% of their brain, you can set them straight. "We use 100% of our brains."

Brain Explorer - StumbleUpon Brain & Behavior mental_floss Blog » How to Learn Fast: Clever Tips from Tim Ferr Tim Ferriss is a New York Times best-selling author, widely known for his book The Four-Hour Work Week. Not only has he cracked the secrets of productivity, he's figured out how to learn things super quickly! Mental Floss' own Chetan Nandakumar managed to snag a few minutes with him. We're interested in this notion of rapid learning. Things like Argentine tango, for example . Yabu-what? Yabusame is Japanese horseback archery. I've also read that you became a National Chinese Kickboxing Champion in almost no time. Sure. Are there some overarching principles that apply across domains? The first is that material is more important than method . Point two is association, basically the power of associative memorization. The third important thing is self-observation, which is critically important. Your rapid learning approach seems to require a lot of analysis and self-observation. Are there any limits to what someone can learn? Well, there are a few. Any thoughts on education in schools?

Cranial Nerves Can't remember the names of the cranial nerves? Here is a handy-dandy mnemonic for you: On Old Olympus Towering Top AFamous Vocal German Viewed Some Hops. The bold letters stand for: olfactory, optic, oculomotor, trochlear, trigeminal, abducens, facial, vestibulocochlear, glossopharyngeal, vagus, spinal accessory, hypoglossal. Still can't remember the cranial nerves? Sleep Sleeping is associated with a state of muscle relaxation and limited perception of environmental stimuli. The purposes and mechanisms of sleep are only partially clear and the subject of substantial ongoing research.[2] Sleep is sometimes thought to help conserve energy, though this theory is not fully adequate as it only decreases metabolism by about 5–10%.[3][4] Additionally it is observed that mammals require sleep even during the hypometabolic state of hibernation, in which circumstance it is actually a net loss of energy as the animal returns from hypothermia to euthermia in order to sleep.[5] Humans may suffer from a number of sleep disorders. These include dyssomnias (such as; insomnia, hypersomnia, and sleep apnea) and parasomnias (such as sleepwalking and REM behavior disorder; and the circadian rhythm sleep disorders). Physiology[edit] Hypnogram showing sleep cycles from midnight to 6.30 am, with deep sleep early on. Stages[edit] 30 seconds of deep (stage N3) sleep. REM sleep[edit]

A Complete MDMA Synthesis for the First Time Chemist - Taimapedia A Complete MDMA Synthesis for the First Time Chemist Compilation and Editorial by Bright Star HTML and Pictures by Rhodium Introduction Thanks to Strike, Rhodium, Ritter, Osmium, r2d3, Semtex Enigma, Spiceboy, ChemHack, Labrat, Eleusis, Ketone/LabGrrrl, and a personal hero, Dr. Shulgin. And to the object that made this possible - the Internet. Disclaimer: This is for theoretical argument only. IF someone chooses to follow this synthesis, note that the product has been 'Scheduled 1' by the United States Government, and offenders can be prosecuted. This is a hypothetical synthesis for: 3,4-methylenedioxy-N-methylamphetamine. Overview Apparatus and Glass "The Organic Chemistry Lab Survival Manual" by James W. Chemicals Step 1: Distillation: of Natural Oil to obtain pure Safrole Comprehensive Description of This Step by Chromic Set up for a vacuum distillation like on page 53 of Zubrick. The Peanut Oil: A bowl with a flat bottom rests on the Hotplate. At 80°C a clear solution was obtained. Step 5

Level 3 of Consciousness by Richard Brodie Meme Central Books Level 3 Resources Richard Brodie Virus of the Mind What’s New? Site Map Level 3 of Consciousness You are reading about something that most people don’t even know exists. 1. Sometimes like attracts like and sometimes opposite attracts opposite. When like attracts like, it can end there, like an oxygen molecule made up of two oxygen atoms, or it can continue to attract like, like a Carbon atom. 2. Sometimes a self-replicating thing makes a copy of itself with a mistake in it. The only way for new things to get created is by a complex series of mistakes that turn out to be better after all. 3. 4. 5. 6. Self-replication is the most powerful force in the universe. Sometimes a self-replicating memeplex makes a mistake in copying itself. The only way for a new idea to gain acceptance is by a series of copying mistakes that turn out to be better after all. 7. 8. 9. 10. 11. The battle can be influenced in three ways. 12. 13. Life is largely composed of conversations. 14.

Culture Vaults : Resonant Frequencies and the Human Brain - StumbleUpon One of the great revelations of 20th century science is that all existence can be broken down into simple wave functions. Every photon, energy emission, and elementary particle rings with its own unique wave signature. When we see a color, we are actually seeing a distinct frequency of visible light. When we hear a sound, our eardrums are actually being vibrated by subtle waves in the air molecules around us. Even the neurochemical processes of human consciousness ­ our very thoughts ­ ring with their own distinct wave patterns. By studying the way that waves interact with other waves, researchers have found that even low-powered oscillations can have enormous effects on standing waves, physical structures, and even the human brain. Tesla first realized the massive potential of resonant waves in 1898 when he performed a simple experiment with an electromechanical oscillator the size of an alarm clock. "The principle cannot fail," Tesla would say. Monroe's Big Discovery The Neural Radio

Two Suns? Twin Stars Could Be Visible From Earth By 2012 - StumbleUpon By Dean Praetorius | HuffingtonPost.com Earth could be getting a second sun, at least temporarily. Dr. Brad Carter, Senior Lecturer of Physics at the University of Southern Queensland, outlined the scenario to news.com.au. Betelgeuse, one of the night sky’s brightest stars, is losing mass, indicating it is collapsing. It could run out of fuel and go super-nova at any time. When that happens, for at least a few weeks, we’d see a second sun, Carter says. The Star Wars-esque scenario could happen by 2012, Carter says... or it could take longer. But doomsday sayers should be careful about speculation on this one. In fact, a neutrino shower could be beneficial to Earth. UPDATE: To clarify, the news.com.au article does not say a neutrino shower could be beneficial to Earth, but implies a supernova could be beneficial, stating, "Far from being a sign of the apocalypse, according to Dr Carter the supernova will provide Earth with elements necessary for survival and continuity." Top Image: Source

Career self-efficacy and perceptions of parent support in adolescent career development. The authors examined the relative contributions of both proximal and distal supports to the career interests and vocational self-efficacy in a multiethnic sample (N = 139) of middle school adolescents. Consistent with Social Cognitive Career Theory, it was found that (a) vocational self-efficacy and career planning/exploration efficacy consistently predicted young adolescents' career interests across Holland (J. L. Holland, D. R. Whitney, N. The role of parents and the role of professional school counselors go hand in hand in the career development of young adolescents. The role of parental influence and support outside the school setting has also been hypothesized to have a significant, positive impact on a child's career development process. Research has demonstrated some of the positive effects of parent support on adolescent and young adult career development. Purpose of the Study Participants Measures Mapping vocational challenges. Career Planning and Exploration Efficacy Scale.