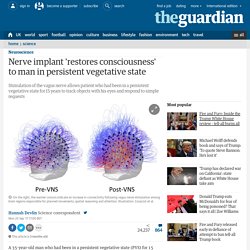 The treatment challenges a widely-accepted view that there is no prospect of a patient recovering consciousness if they have been in PVS for longer than 12 months. The Neuroscientist Who Lost Her Mind - The New York Times. A bug in fMRI software could invalidate 15 years of brain research. There could be a very serious problem with the past 15 years of research into human brain activity, with a new study suggesting that a bug in fMRI software could invalidate the results of some 40,000 papers. 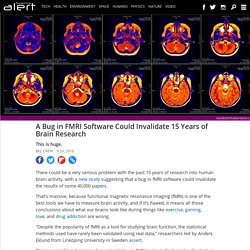 That's massive, because functional magnetic resonance imaging (fMRI) is one of the best tools we have to measure brain activity, and if it’s flawed, it means all those conclusions about what our brains look like during things like exercise, gaming, love, and drug addiction are wrong. "Despite the popularity of fMRI as a tool for studying brain function, the statistical methods used have rarely been validated using real data," researchers led by Anders Eklund from Linköping University in Sweden assert. Addressing reverse inference in psychiatric neuroimaging: Meta-analyses of task-related brain activation in common mental disorders. 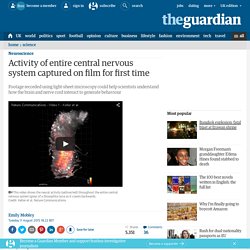 The video footage shows neurons firing in the nervous system of a fruit fly larva, Drosophila melanogaster, as it crawls back and forth. Scientists at the Howard Hughes Medical Institute in Ashburn, Virginia, imaged patterns of motor neuron activity in the organism as it crawled backwards and forwards. The images were captured five times per second for up to an hour, at a resolution high enough to see single neurons firing. The Machine That Tried To Scan The Brain — In 1882. Angelo Mosso's "human circulation balance" machine worked like a seesaw to measure blood flow changes to the brain. 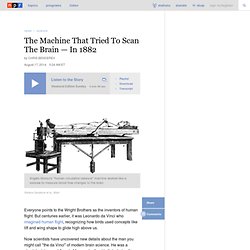 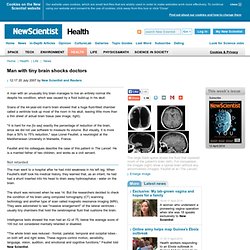 Scans of the 44-year-old man's brain showed that a huge fluid-filled chamber called a ventricle took up most of the room in his skull, leaving little more than a thin sheet of actual brain tissue (see image, right). "It is hard for me [to say] exactly the percentage of reduction of the brain, since we did not use software to measure its volume. But visually, it is more than a 50% to 75% reduction," says Lionel Feuillet, a neurologist at the Mediterranean University in Marseille, France. Feuillet and his colleagues describe the case of this patient in The Lancet. He is a married father of two children, and works as a civil servant. Not retarded. Reflecting on mirror neurons. Mirror neurons have been used to explain everything from language acquisition to autism. 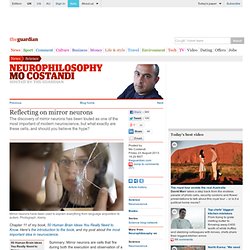 Photograph: Alamy Chapter 11 of my book, 50 Human Brain Ideas You Really Need to Know. Here's the introduction to the book, and my post about the most important idea in neuroscience. Dying brains: is our last hurrah an explosion of conscious experience? What does it feel like to die? 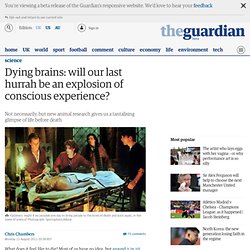 Most of us have no idea, but around 1 in 10 people who survive a cardiac arrest report having near death experiences (NDEs). These can range from relived memories to vivid experiences of light, sound, and emotion. An interesting new study by Jimo Borjigin and colleagues at the University of Michigan, published in PNAS, may help explain what happens in the brain immediately before death. False memory planted in mouse's brain. Scientists have implanted a false memory in the brains of mice in an experiment that they hope will shed light on the well-documented phenomenon whereby people "remember" events or experiences that have never happened. 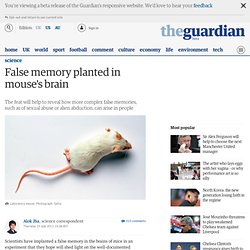 False memories are a major problem with witness statements in courts of law. Defendants have often been convicted of offences based on eyewitness testimony, only to have their convictions later overturned when DNA or some other corroborating evidence is brought to bear. In order to study how these false memories might form in the human brain, Susumu Tonegawa, a neuroscientist at the RIKEN-MIT Center for Neural Circuit Genetics, and his team encoded memories in the brains of mice by manipulating individual neurons. He described the results of the study in the latest edition of the journal Science. Memories of experiences we have had are made from several elements including records of objects, space and time. 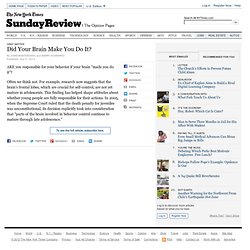 For example, research now suggests that the brain’s frontal lobes, which are crucial for self-control, are not yet mature in adolescents. This finding has helped shape attitudes about whether young people are fully responsible for their actions. In 2005, when the Supreme Court ruled that the death penalty for juveniles was unconstitutional, its decision explicitly took into consideration that “parts of the brain involved in behavior control continue to mature through late adolescence.” Similar reasoning is often applied to behavior arising from chemical imbalances in the brain. It is possible, when the facts emerge, that the case of James E. Whatever the merit of such cases, it’s worth stressing an important point: as a general matter, it is always true that our brains “made us do it.” Unfortunately, our research shows that clear thinking on this issue doesn’t come naturally to people. The pattern of results was striking. 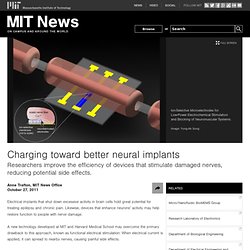 Likewise, devices that enhance neurons’ activity may help restore function to people with nerve damage. A new technology developed at MIT and Harvard Medical School may overcome the primary drawback to this approach, known as functional electrical stimulation: When electrical current is applied, it can spread to nearby nerves, causing painful side effects. Nerves, the long bundles of neuronal extensions that carry instructions to the muscles — as well as sensory information such as pain — communicate via extremely rapid electrical signals. By manipulating the concentration of charged ions surrounding a nerve, the researchers were able to dramatically reduce the current needed to keep an impulse going; they could also interrupt an impulse as it traveled along a nerve. Treating damage with electricity.

Scientists Create Tiny Artificial Brain That Exhibits 12 Seconds of Short Term Memory. Guiding lights. In a scientific first that could shed light on how signals travel in the brain and the effects of learning on neural pathways, scientists at Harvard have created genetically altered neurons that light up as they fire. The work may also lead to speedier drug development. Led by John L. Loeb Associate Professor of the Natural Sciences Adam Cohen and described in Nature Methods on Nov. 27, the research involved using a gene from a Dead Sea microorganism to produce a protein that, when exposed to the electrical signal in a neuron, fluoresces, allowing scientists to trace the propagation of signals through the cell. “It’s very exciting,” Cohen said. Rebuilding the brain’s circuitry. Neuron transplants have repaired brain circuitry and substantially normalized function in mice with a brain disorder, an advance indicating that key areas of the mammalian brain are more reparable than was widely believed.