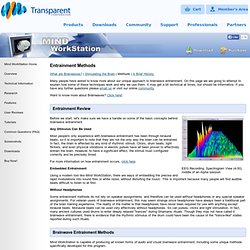 | Stimulating the Brain | Methods | A Brief History Many people have asked to know more about our unique approach to brainwave entrainment. On this page we are going to attempt to explain how some of these techniques work and why we use them. It may get a bit technical at times, but should be informative. Want to know more about Brainwaves? Before we start, let's make sure we have a handle on some of the basic concepts behind brainwave entrainment. Any Stimulus Can Be Used Most people's only experience with brainwave entrainment has been through binaural beats, so it is important to note that they are not the only way the brain can be entrained. For more information on how entrainment occurs, click here. Embedded Entrainment Using a modern tool like Mind WorkStation, there are ways of embedding the precise and rapid modulations into sound files or white noise, without distorting the music.

Hypnosis. Pineal Gland. Inferior Colliculus in Relation to Pineal Gland. Inferior Colliculus and Ventriloquism : The Brain: Sight, Sound Processed Together And Earlier Than Previously Thought. The area of the brain that processes sounds entering the ears also appears to process stimulus entering the eyes, providing a novel explanation for why many viewers believe that ventriloquists have thrown their voices to the mouths of their dummies. 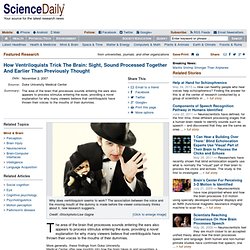 More generally, these findings from Duke University Medical Center offer new insights into how the brain takes in and assembles a multitude of stimuli from the outside world. By studying monkeys, the researchers found that auditory and visual information is processed together before the combined signals make it to the brain's cortex, the analytical portion of the brain that assembles the stimuli from all the senses into coherent thoughts. "The prevailing wisdom among brain scientists has been that each of the five senses -- sight, hearing, smell, touch and taste -- is governed by its own corresponding region of the brain," said Jennifer Groh, Ph.D., a neurobiologist in Duke's Center for Cognitive Neuroscience. 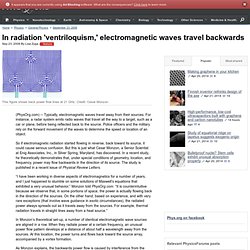 For instance, a radar system emits radio waves that travel all the way to a target, such as a car or plane, before being reflected back to the source. Police officers and the military rely on the forward movement of the waves to determine the speed or location of an object. So if electromagnetic radiation started flowing in reverse, back toward its source, it could cause serious confusion. But this is just what Cesar Monzon, a Senior Scientist at Enig Associates, Inc., in Silver Spring, Maryland, has discovered. In a recent study, he theoretically demonstrates that, under special conditions of geometry, location, and frequency, power may flow backwards in the direction of its source.

“I have been working in diverse aspects of electromagnetics for a number of years, and I just happened to stumble on some solutions of Maxwell’s equations that exhibited a very unusual behavior,” Monzon told PhysOrg.com. Switching between habitual and goal-directed actions—a 'two in one' system in our brain. To unravel the circuit that underlies this capacity, the capacity to "break habits," was the goal of the study, carried out by Christina Gremel and Rui Costa, at NIAAA, National Institutes of Health, USA and the Champalimaud Foundation, in Portugal published in Nature Communications. 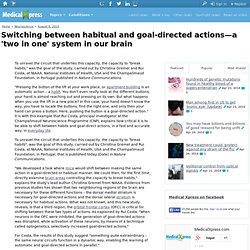 "Pressing the button of the lift at your work place, or apartment building is an automatic action – a habit. You don't even really look at the different buttons; your hand is almost reaching out and pressing on its own. But what happens when you use the lift in a new place? In this case, your hand doesn't know the way, you have to locate the buttons, find the right one, and only then your hand can press a button. Here, pushing the button is a goal-directed action. " "We developed a task where mice would shift between making the same action in a goal-directed or habitual manner. Explore further: Study identifies brain circuits involved in learning and decision making.

Study identifies brain circuits involved in learning and decision making. (Medical Xpress)—Research from the National Institutes of Health has identified neural circuits in mice that are involved in the ability to learn and alter behaviors. 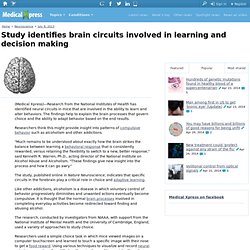 The findings help to explain the brain processes that govern choice and the ability to adapt behavior based on the end results. Researchers think this might provide insight into patterns of compulsive behavior such as alcoholism and other addictions. "Much remains to be understood about exactly how the brain strikes the balance between learning a behavioral response that is consistently rewarded, versus retaining the flexibility to switch to a new, better response," said Kenneth R. Warren, Ph.D., acting director of the National Institute on Alcohol Abuse and Alcoholism. "These findings give new insight into the process and how it can go awry. "