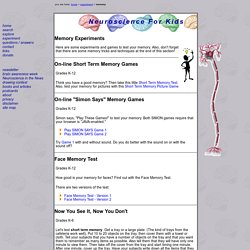 Also, don't forget that there are some memory tricks and techniques at the end of this section! On-line Short Term Memory Games Grades K-12. Pavlovia. Robust and efficient online auditory psychophysics with the right auditory hygiene. I had a brain tumor removed. I asked the neurosurgeon to take a before & after pic inside my head. : interestingasfuck. Otter showing a human how to pet him. : Damnthatsinteresting. 67% of participants who received three MDMA-assisted therapy sessions no longer qualified for a PTSD diagnosis, results published in Nature Medicine : science.

Nervous system diagram blank. This guy seeing colors for the first time. His reaction is priceless. : PublicFreakout. 24 Sites to Find Free Images You Would Actually Use for Your Marketing. Here at Buffer, we think a lot about visual content. 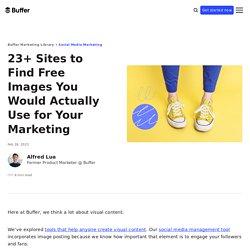 We’ve shared our own study on the importance of images in Twitter posts for more social sharing. We’ve explored tools that help anyone create visual content. Our social media management tool incorporates image posting because we know how important that element is to engage your followers and fans. Early Illustrations of the Nervous System by Camillo Golgi and Santiago Ramón y Cajal. Born the son of a doctor in a small town in Lombardy, Italy, Golgi studied at the University of Pavia, where he eventually specialized in the etiology of mental disorders. 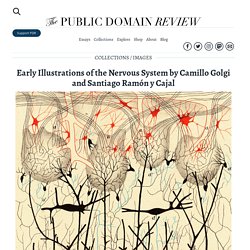 Eager to do research but in need of money, he took a job at a hospital, where, in a makeshift laboratory set up in the kitchen, he developed what he called the “black reaction”. Now known as the Golgi method, it involves immersing tissue specimens in silver nitrate, creating a black deposit on the soma, axon, and dendrites which, once placed under the microscope, become clearly visible against a yellow background. This method made it possible not only to trace the connections between neurons but also to visualize the complex networking structure of the brain and spinal cord. Scientists find new evidence linking essential oils to seizures: Analyzing 350 seizure cases, researchers found that 15.7% of seizures may have been induced by inhalation, ingestion or topical use of essential oils. After stopping use of oils, the vast ma. Neuropsychology of Consciousness: Some History and a Few New Trends. Seizures and Traumatic Brain Injury.

One of the problems that can occur after a traumatic brain injury (TBI) is seizures. 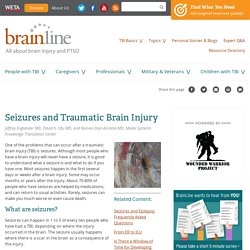 Although most people who have a brain injury will never have a seizure, it is good to understand what a seizure is and what to do if you have one. Most seizures happen in the first several days or weeks after a brain injury. Schematic representation of a parasagittal section of the human brain,... Context 1 ... is a devastating neurovascular disease with high mortality and a staggering economic burden on the United States, estimated at $73.7 billion for the year 2010 (Lloyd-Jones et al , 2010). 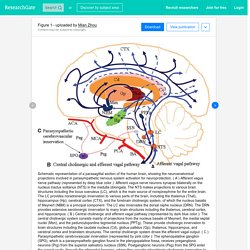 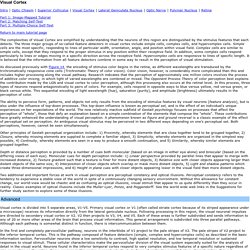 The three major groups of so-called feature detectors in visual cortex include simple cells, complex cells, and hypercomplex cells. Simple cells are the most specific, responding to lines of particular width, orientation, angle, and position within visual field. The Science of Scientific Writing. This article was originally published in the November-December 1990 issue of American Scientist. 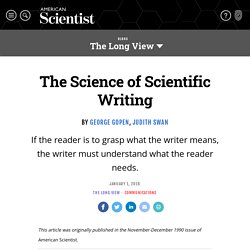 Science is often hard to read. Most people assume that its difficulties are born out of necessity, out of the extreme complexity of scientific concepts, data and analysis. We argue here that complexity of thought need not lead to impenetrability of expression; we demonstrate a number of rhetorical principles that can produce clarity in communication without oversimplifying scientific issues. The results are substantive, not merely cosmetic: Improving the quality of writing actually improves the quality of thought.

The fundamental purpose of scientific discourse is not the mere presentation of information and thought, but rather its actual communication. Rate of Hanger Reflex Occurrence: Unexpected Head Rotation on Fronto-temporal Head Compression. Zombie Parasites. 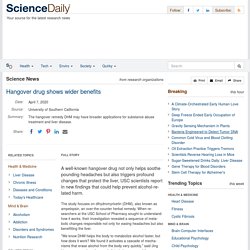 The study focuses on dihydromyricetin (DHM), also known as ampelopsin, an over-the-counter herbal remedy. When researchers at the USC School of Pharmacy sought to understand how it works, their investigation revealed a sequence of metabolic changes responsible not only for easing headaches but also benefitting the liver. "We know DHM helps the body to metabolize alcohol faster, but how does it work? We found it activates a cascade of mechanisms that erase alcohol from the body very quickly," said Jing Liang, a research professor of clinical pharmacy and the corresponding author of the study. The study appears today in Alcoholism: Clinical and Experimental Research. Alcohol use disorders constitute the most common form of substance abuse. What is an individual? Information Theory may provide the answer. 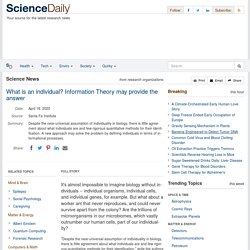 But what about a worker ant that never reproduces, and could never survive apart from the colony? Are the trillions of microorganisms in our microbiomes, which vastly outnumber our human cells, part of our individuality? "Despite the near-universal assumption of individuality in biology, there is little agreement about what individuals are and few rigorous quantitative methods for their identification," write the authors of new work published in the journal Theory in Biosciences.

The problem, they note in the paper, is analogous to identifying a figure from its background in a Gestalt psychology drawing. We Tested Europe’s New Digital Lie Detector. It Failed. They call it the Silent Talker. 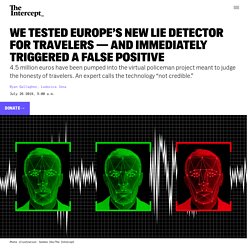 It is a virtual policeman designed to strengthen Europe’s borders, subjecting travelers to a lie detector test before they are allowed to pass through customs. Prior to your arrival at the airport, using your own computer, you log on to a website, upload an image of your passport, and are greeted by an avatar of a brown-haired man wearing a navy blue uniform.

Computational. Writing Quality. Blindness & Brain. Italian family's inability to feel pain spurs research on relief for chronic sufferers. Chronic pain affects millions of people, who not only suffer but also risk becoming addicted to the opioid drugs used to treat it. A new report on six members of a three-generation Italian family who barely notice burns, bone breaks, and even red hot chili pepper extract rubbed into pricked skin, may pave the way to new painkillers — following clues from a single mutant gene. The new report, published in the journal Brain, is from James Cox, PhD, senior lecturer in the Molecular Nociception Group at University College London (UCL) and colleagues. SchembriMirolliBaldassarre2007. The gradient of the reinforcement landscape influences sensorimotor learning.

Reinforcement Contingency Learning in Children with ADHD: Back to the Basics of Behavior Therapy. Different memory patterns of digits: a functional MRI study. Brain mechanisms of visual long-term memory retrieval in primates. Aggleton and Brown, 2006 J.P. Aggleton, M.W. BrownInterleaving brain systems for episodic and recognition memory Trends Cogn. Sci., 10 (2006), pp. 455-463 Arcaro et al., 2011 M.J. J. Arsenault et al., 2013 J.T. PNAS Plus: Multiple interactive memory representations underlie the induction of false memory. Create, Discover and Share on Gfycat. Cookies are Not Accepted - New York Times. “They Basically Reset My Brain” MIT challenges New York Times over book on famous brain patient. He Massachusetts Institute of Technology brain sciences department and, separately, a group of some 200 neuroscientists from around the world have written letters to The New York Times claiming that a book excerpt in the newspaper’s Sunday magazine this week contains important errors, misinterpretations of scientific disputes, and unfair characterizations of an MIT neuroscientist who did groundbreaking research on human memory.

In particular, the excerpt contains a 36-volley verbatim exchange between author Luke Dittrich and MIT’s Suzanne Corkin in which she says that key documents from historic experiments were “shredded.” “Most of it has gone, is in the trash, was shredded,” Corkin is quoted as telling Dittrich before she died in May, explaining, “there’s no place to preserve it.” Destroying files related to historic scientific research would raise eyebrows, but Corkin’s colleagues say it never happened. [1704.03855] How brains are built: Principles of computational neuroscience. 521 532(jos) Spaceinvaders. Aging on Nautilus: Yes, Life in the Fast Lane Kills You.

Nick Lane is an evolutionary biochemist at University College London who thinks about the big questions of life: how it began, how it is maintained, why we age and die, and why we have sex. Shunning the habit of our times to regard these as questions for evolutionary genetics, Lane insists that our fundamental biochemical mechanisms—particularly those through which living cells generate energy—may determine or limit these facts of life.

Scratching is catching in mice. How Brain Scientists Forgot That Brains Have Owners - The Atlantic. A giant neuron found wrapped around entire mouse brain. Allen Institute for Brain Science. Split brain does not lead to split consciousness. A depiction of the traditional view of the split brain syndrome (top) versus what the researchers actually found in two split-brain patients across a wide variety of tasks (bottom). Brain’s connections which keep related memories distinct from each other, identified in new study. Credit: University of Bristol. America's Long-Overdue Opioid Revolution Is Finally Here. Special Report: New Study Finds Performance-Enhancing Drugs for Chess. It is the first time that drugs have been found to improve chess performance under rigorous scientific conditions. The results of the ground-breaking study have been published in a leading scientific journal.

How LSD Binds to the Brain, and Why Trips Last So Long. Sat-nav neurons tell bats where to go. Poet: I can’t answer questions on Texas standardized tests about my own poems. Science AMA Series: We are the neuroscientists who started the Open Neuroimaging Lab, a winner of the Open Science Prize - AMA : science. The Brainless Slime That Can Learn By Fusing - The Atlantic. Psychiatrists Must Face Possibility That Medications Hurt More Than They Help - Scientific American Blog Network. Study Links Gut Bacteria to Parkinson’s Disease. Rhythms of the brain, Buzsaki 2008 (Rhythms of the Brain, Book, Buzsaki 2008.pdf) - PDF Archive. Greenberg Educational Consulting Organization. ‘Shock Therapy’ Is Saving Some Children With Autism From Self-Harm - The Atlantic. Midget pathways of the primate retina underlie resolution and red green color opponency by Helga Kolb.