Reporting Rape: How the Justice System is Failing Victims of Violence. Photo credit: Reuters Violence against women and girls remains one of the most prominent and pressing issues of inequality globally, with at least one in three women around the world becoming a victim of rape or attempted rape in her lifetime. 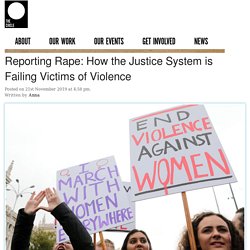 In the UK, one in five women have experienced some type of sexual assault, according to official analysis of violent crime figures by the Crime Survey for England and Wales. Despite the fact that the UK comes in at 14th on the Gender Inequality Index (1st being most equal), 173 women were killed at the hands of their partners over the last year and more than 85,000 were raped. The Guardian view on rape and the justice system: victims deserve more than t... The criminal justice system has been failing victims of rape for a long time. 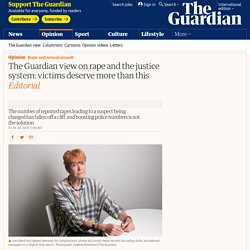 From the initial reporting of a crime, through to investigation and trial, for decades women could expect to be on the receiving end – from police, lawyers, judges, juries and the wider public – of some combination of disrespect, distrust and scorn. This doesn’t mean that sympathy was always with the accused, or that justice was never done. But sexual mores and sexist prejudice combined to make the process of seeking justice an impossibly hard one.

To what extent we have left that world behind is not easy to say. The Justice System Is Failing Rape Victims - VICE. From-Report-to-Court-2018. SAGE Journals: Your gateway to world-class journal research. Introduction Rape can have a devastating impact on every aspect of victims’/survivors’ lives and make them vulnerable to further episodes of sexual abuse or violence (McMillan and Thomas, 2009). 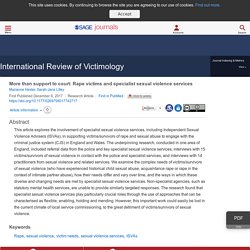 There can be long-term physical, psychological and wider impacts of being the victim of rape and sexual assault that include post-traumatic stress disorder, depression, anxiety, inability to sleep and other effects, such as physical disability. There are also secondary effects, such as a reduction in victims’ ability to work or study, difficulties with forging new relationships or maintaining positive relationships with family and friends, or problems with their ability to care for others, their children, for example (McNaughton Nicholls et al., 2012: 21). 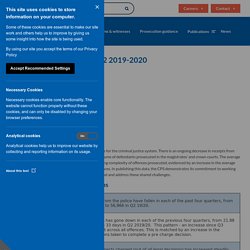 There is an ongoing decrease in receipts from the police, and as a result, a continuing decline in the volume of defendants prosecuted in the magistrates’ and crown courts. Police sending a third fewer rape cases to prosecutors, figures show. Rape victims are finding it increasingly difficult to access justice as police refer fewer cases to the Crown Prosecution Service and fewer allegations of rape are being prosecuted and convicted, according to new figures. 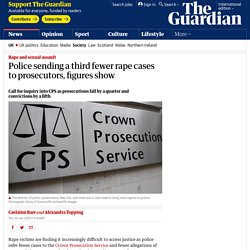 The number of cases referred by the police for charging decisions fell by 32% in the year to September 2019, while prosecutions by the CPS fell 26% and convictions dropped 21%, according to Guardian analysis of quarterly CPS prosecution data. The victims’ commissioner for England and Wales has called on the attorney general to reject a recent report by the CPS inspectorate (HMCPSI) that concluded the service was not to blame for a precipitous drop in rape charges.

Group and workshops - One In Four UK. One in Four runs courses and workshops for survivors to look at issues related to a history of sexual abuse. 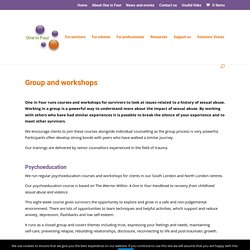 Working in a group is a powerful way to understand more about the impact of sexual abuse. By working with others who have had similar experiences it is possible to break the silence of your experience and to meet other survivors. We encourage clients to join these courses alongside individual counselling as the group process is very powerful. Participants often develop strong bonds with peers who have walked a similar journey. Thesurvivorstrust. The Sue Lambert Trust (previously known as the Sexual Violence Alliance) in a Norfolk based charity which provides support for survivors of sexual violence and/or abuse. 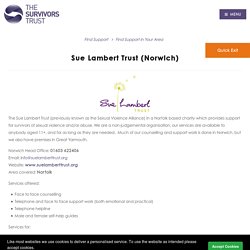 We are a non-judgemental organisation, our services are available to anybody aged 11+, and for as long as they are needed. Much of our counselling and support work is done in Norwich, but we also have premises in Great Yarmouth. City Research Online - Memory as evidence: How normal features of victim memory lead to the attrition of rape complaints. Hohl, K. and Conway, M. 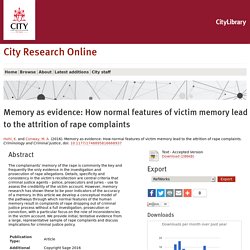 A. (2016). Memory as evidence: How normal features of victim memory lead to the attrition of rape complaints. Criminology and Criminal Justice, doi: 10.1177/1748895816668937 Abstract. Lawyers’ Strategies for Cross-examining Rape Complainants: Have We Moved Beyond the 1950s? Issue 85 - "What is the justice system willing to offer?" Research has established that sexual assault is widespread and its harms are significant to individual victims, families and society more broadly (Morrison, Quadara, & Boyd, 2007; VicHealth, 2004; World Health Organization [WHO], 2000, 2002). 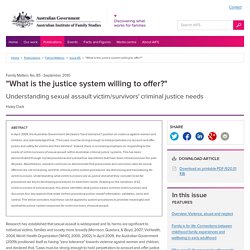 In April 2009, the Australian Government (2009) positioned itself as having "zero tolerance" towards violence against women and children, and declared that, "Laws must be strong enough to hold perpetrators to account and offer justice and safety for victims and their families". Currently, the criminal justice system is the primary institution available for responding to sexual offences, yet this system is underused and largely ineffective at prosecuting cases (Australian Bureau of Statistics [ABS], 2010; Daly & Bourhours, 2009). Victim/survivors are placed in a central yet compromised position within the criminal justice system, and two interrelated aspects facilitate this.

Justice I just thought, no, we are gonna pursue this. Information Validation. Error - Cookies Turned Off. Lawyers’ Strategies for Cross-examining Rape Complainants: Have We Moved Beyond the 1950s? Sexual assault victimization and psychopathology: A review and meta-analysis. - PubMed - NCBI. SAGE Journals: Your gateway to world-class journal research. 10. Justice from the victim's perspective. - PubMed - NCBI. Report of the Independent Review into The Investigation and Prosecution of Rape in London by Rt Hon Dame Elish Angiolini DBE QC. Survivors of sexual violence are let down by the criminal justice system – here's what should happen next. How well do criminal justice systems treat survivors of sexual violence? 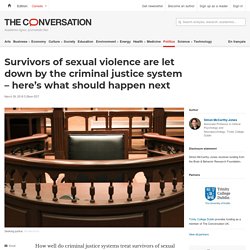 The answer is not only important to survivors. It also signals to society how sexual violence should be viewed. The poor treatment of survivors, when combined with few perpetrators being convicted and a perception of lenient sentencing, could tacitly signal to society a “decriminalisation of rape”. This cannot be permitted. Many survivors in the United Kingdom, Ireland and the US (which all have adversarial legal systems) have negative experiences of the criminal justice system (CJS). There is an urgent need to discuss and rectify these. Problems entering the system The first problem with the CJS for survivors is that most never enter it in the first place. The reasons for this are often rooted in fear. Even when people do enter the CJS, many leave it again. In recognition of such problems, many police forces have committed to improving training for officers. The problems at trial What should happen now Beyond reform.