10 Tools Every Teacher Should Master This Summer 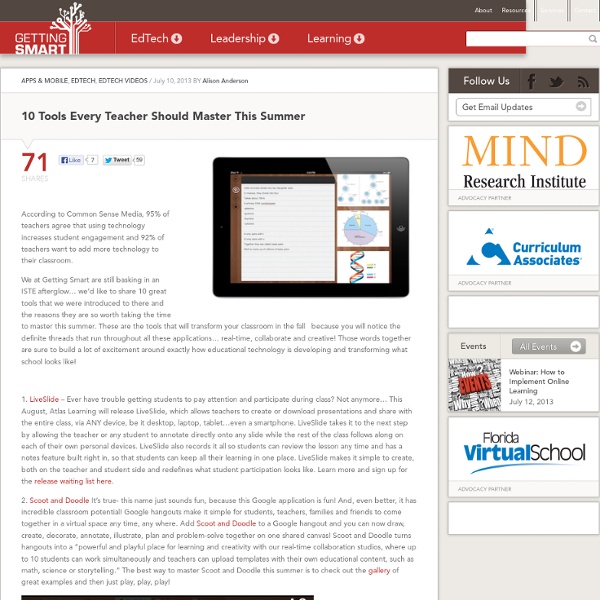 According to Common Sense Media, 95% of teachers agree that using technology increases student engagement and 92% of teachers want to add more technology to their classroom. We at Getting Smart are still basking in an ISTE afterglow… we’d like to share 10 great tools that we were introduced to there and the reasons they are so worth taking the time to master this summer. These are the tools that will transform your classroom in the fall because you will notice the definite threads that run throughout all these applications… real-time, collaborate and creative! Those words together are sure to build a lot of excitement around exactly how educational technology is developing and transforming what school looks like! 1. LiveSlide – Ever have trouble getting students to pay attention and participate during class? 2. 3. 4. 5. 6. 7. 8. 9. 10. Related:  Flipped 3 • 11 PHILOSOPHY

Five Ways to Visually Explore Wikipedia Wikipedia is one of the first places that students often go to get some background information on a topic they're researching. Besides just going to Wikipedia.org and entering a search, there are some other ways to explore the content of Wikipedia. Here are five ways that students can visually explore Wikipedia's content. Wiki Mind Map is a resource for visually exploring Wikipedia. Wikihood is a neat way to explore the world in your web browser. Wiki Field Trip is a neat website for exploring Wikipedia entries about places around the world. The Full Wiki offers an interesting mash-up of Google Maps and Wikipedia entries. One of the standard layers in Google Earth is the Wikipedia layer.

Teaching and Learning with the iPad – a 3 Year Review In this excellent 3 part article series, Principal David Mahaley shares lessons learned from the 1:1 iPad program that he has overseen in his role as Principle of The Franklin Academy. David has written several excellent articles for EmergingEdTech, and is the author of the eBook Teaching and Sharing with the iPad: Instructor Quick Guide. I am delighted to publish this series of posts in which he shares the perspective of the Administrator, the Teacher, and the Student, after nearly 3 years of experience with integrating the iPad into the Academy’s curricula. – KW The Franklin Academy, in Wake Forest, North Carolina, completed its third year implementing iPads into the instructional environment. The Administrator We find that the demands of the education system to teach 21st Century Skills challenging when student access to the tools of technology is limited. Lesson 1 – Its About Workflow & Connectivity, Not Apps Lesson 2 – Staff Development & Support Lesson 3 – Be A Model Print This Post

Classroom Aid | Game Building Resources The best FREE resources of game building for teachers and children: Building games for teaching Teach with Portal – Today, innovative educators are finding ways to incorporate Portal™ and Portal 2 into their classrooms—helping teach physics and critical-thinking skills. Machinima (from Knowclue’s wiki) – Film making in virtual worlds can have many roles in education from digital story telling and making documentaries by students in the K-12 classroom to creative expression in the Arts to training farmers about climate change in developing nations. ClassTools – Over 20 free web tools for teachers … create quizzes, diagrams, and educational games, you can host them on your own site free of charge (licensed under creative common). … plus no log in. Purpose Games is a free service that allows users to create custom games, share, and play. Parade of Games in Powerpoint was developed by faculty at the University of Wisconsin at Whitewater. GameSalad is the democratization of game creation.

8 Mistakes Our Brains Make Every Day And How To Prevent Them 12.3K Flares Filament.io 12.3K Flares × Get ready to have your mind blown. I was seriously shocked at some of these mistakes in thinking that I subconsciously make all the time. Obviously, none of them are huge, life-threatening mistakes, but they are really surprising and avoiding them could help us to make more rational, sensible decisions. Especially as we thrive for continues self-improvement at Buffer, if we look at our values, being aware of the mistakes we naturally have in our thinking can make a big difference in avoiding them. Regardless, I think it’s fascinating to learn more about how we think and make decisions every day, so let’s take a look at some of these thinking habits we didn’t know we had. 1. We tend to like people who think like us. This is called confirmation bias. It’s similar to how improving our body language can actually also change who we are as people. Confirmation bias is a more active form of the same experience. 2. 3. 4. Well, no. 5. 6. 7. The lesson here?

The brain mechanism behind your inner voice Corollary discharge plays a central role in our motor system. It allows us to correct motor errors before we have committed them and it allows us to prevent confusion between self- and externally-caused sensory events. Dr Mark Scott How can we ‘hear’ ourselves speak even when we are not speaking aloud? Research published this month suggests that the same mechanism that means we cannot tickle ourselves is responsible… The study, which appeared in the Association for Psychological Science’s journal Psychological Science , involved two experiments aimed at testing the role of corollary discharge in participants’ experiences of inner speech. We are all familiar with the phenomenon of hearing our own voice inside our head despite not saying words out loud, but it has gone largely unexamined and unexplained until recently. "I suspect inner speech has not been a popular research topic for several reasons," Dr Scott began. Preventing confusion Development of consciousness?