13 Wonderful Old English Words We Should Still Be Using Today 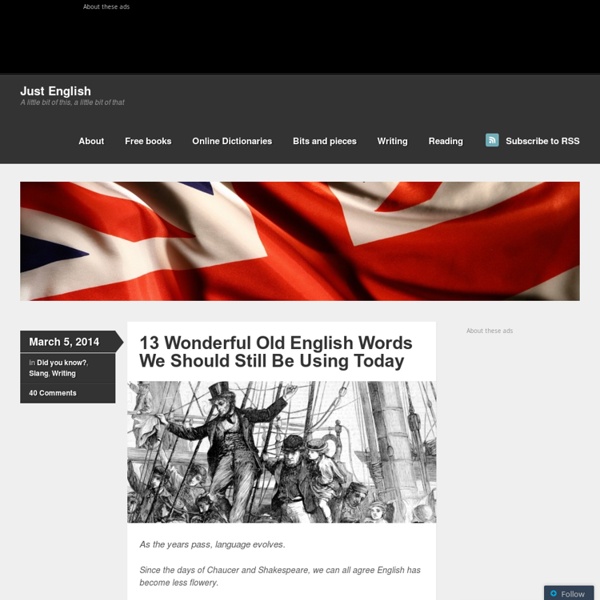 As the years pass, language evolves. Since the days of Chaucer and Shakespeare, we can all agree English has become less flowery. Some fantastic vocabulary just dropped out of everyday conversation. Author Mark Forsyth writes about the words we’ve lost. From his book “Horologicon” to his Tumblr and published articles, we compiled a list of the best words that need reviving. 1. 2. 3. 4. 5. 6. 7. 8. 9. 10. 11. 12. 13. Click to read: Importantly infrequently used words to know Source: www.businessinsider.in Image: Like this: Like Loading... Related 13 Words You Probably Didn't Know Were Coined By Authors Boredom If you're not a fan of his books then it's probably no surprise that Charles Dickens is credited with inventing the word boredom in his classic 1853 novel Bleak House. In "Bits and pieces" Top 10 Charming Words for Nasty People #1: Ruffian Definition: a brutal person; bully Examples: "'You try me too much. In "General Learning" Top 10 Funny-Sounding and Interesting Words In "Did you know?"

10 Everyday Words With Unexpected Origins Books Etymology, or the study of the origin of words, is dry, dusty stuff that will give you allergies if you play with it too long. It also happens to be one of our favorite topics—because sometimes a word travels through such a twisted path to get to its modern meaning that all you can do is scratch your head and wonder how civilization manages to keep itself going. Eat. Live. Laugh. and sometimes shop!: 50 most beautiful English words. A few weeks ago I ran across a list, which I shared with you, of 33 Ways to Stay Creative. One suggestion was to read a page in the dictionary. That one stuck with me. It made me pause and think: When was the last time I even looked up a word in a real {not online} dictionary?

45 ways to avoid using the word 'very' Three Telling Quotes About ‘Very’ Substitute ‘damn’ every time you’re inclined to write ‘very;’ your editor will delete it and the writing will be just as it should be. ~Mark Twain‘Very’ is the most useless word in the English language and can always come out. More than useless, it is treacherous because it invariably weakens what it is intended to strengthen. ~Florence KingSo avoid using the word ‘very’ because it’s lazy.

List of English words of Anglo-Saxon origin A[edit] B[edit] C[edit] D[edit] E[edit] F[edit] 100 Whimsical Words by Mark Nichol The English language can be maddening to native speakers and learners alike, but is also delightfully rich, especially for those who seek to convey a lighthearted tone in their writing. Here are 100 words it’s difficult to employ without smiling. Though their meanings may be obscure, they each present a challenge — I mean an opportunity — for you to paint a vivid word picture.

10 Words That Don't Mean What You May Think They Do by Mark Nichol As English evolves, word meanings shift and turn, sometimes reversing themselves altogether. These ten words have shifted their senses over the years. 100 Mostly Small But Expressive Interjections David Bier Thanks for this – what a fun post considering there’s no actual narrative in it! Cecily Some of these interjections are quite culturally and age specific, so if people need to be told what they mean, they should probably not be using them.For example, to many Brits, va-va-voom is not old-fashioned at all, but instead is firmly linked to the long-running ads that footballer Thierry Henry made for the Renault Clio. Himanshu Chanda Whoa ! What a biiiig list.

The Mind is a Metaphor: As It Were As It Were · 2006-09-27 by Brad Pasanek Must we mean what we say? In the case of metaphor, meaning is underspecified, patently false, or—according to some theorists—somehow transmuted.