Geoengineering And The Collapse Of Earth 2014 - THIS MUST BE SHARED! 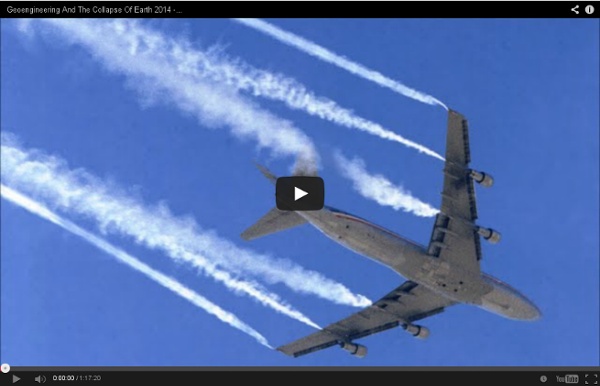 "September 11 - The New Pearl Harbor" - Full version (1/3) Analysis of Welsbach Alumina Aerosol Seeding Patent As Major Contributor to Global Warming Image from Page 1 of Welsbach Patent (PDF) Click Here Notice the Welsbach patent specifies deployment of aluminum oxide into the STRATOSPHERE at 70 to 90,000 feet where the majority of military and commercial aircraft cannot even fly. When aluminum oxide – as artificial contrails and clouds – is sprayed up to 7 miles lower in the troposphere, the result is consistent with climatologist data that confirms the result could warm surface temperatures - thus aggravating global warming. IPCC scientists and NASA agree that Contrails and artificial clouds have significant impact of climate. “Contrails tend to warm the Earth’s surface, similar to thin high clouds”. (1) Artificial clouds sprayed by jet aircraft can “change the climate and affect natural resources”. (2) “The notion that the aerosols are in some way cooling the planet is contradictory to direct observation and the examinations of physics” (3) Sources: Like this: Like Loading...

Kevin Barrett: 9/11 Probe Closing in on Israel Why is Israel committing suicide? (Kevin Barrett) Netanyahu’s genocidal onslaught in Gaza has done more to delegitimize the Zionist entity than the work of all the world’s anti-Zionists put together. Yet the Israeli military cannot stop the Palestinian resistance; from an Israeli standpoint, the hecatomb in Gaza serves no military or strategic purpose. Is Israel insane? That is a rhetorical question. At least since the first Intifada – and arguably since 1948 – Israel has had a de facto official policy of butchering Palestinian children. But until now they were sane enough to hide it. Today they are bragging about it. On Sunday, the Israelis intentionally bombed a United Nations school full of refugees, many of them children, killing more than ten and wounding dozens. The strategic insanity of such actions beggars belief. If Gates is right, the Zionists must be taking desperate measures because they are in a desperate situation. The week’s third 9/11 truth triumph was in the US Congress.

Zim Shipping: New Evidence suggests Six Months Foreknowledge of the September 11th Attack Date and Potential Involvement in the Israeli Deep Cover Operation By Keith Maart | February 20, 2014 Zim American-Israeli Shipping (“Zim”) was the predecessor company of the present Zim Integrated Shipping Services and was 49 percent owned by the Israeli government on 9/11. In 2004, the Israeli government sold their interest to the Israeli Ofer Brothers Group, which then became the sole owner of the company.[1] On 9/11, Zim’s headquarters was in Haifa, Israel, and it had worldwide regional offices in Hong Kong, Hamburg, Germany, and Manhattan, New York/Norfolk, Virginia.[2] At the time of the 9/11 attacks Zim was one of two Israeli companies with lease contracts at the World Trade Center. The other Israeli tenant, Clear Forest, had a small office of 18 employees on the 47th floor of WTC 1 (the North Tower). Zim’s remaining lease term had long been a point of debate, with 9/11 conspiracy debunkers claiming there was no evidence that Zim’s WTC lease term extended beyond their move-out date.

Donald Fox | Exposing the Nuclear Truth of 9/11 and other things I find interesting 9/11: The Shocking Truth Laid Bare This article consists of key 9/11 quotations arranged in the form of a 6500-word dramatic collage so as to give the impression of a live “debate” — an imaginary debate in which the shocking Truth is finally laid bare. 1. Introduction LASHA DARKMOON: I’d like to start by saying that every statement you read here is a 100 percent authentic quote. Nothing has been fabricated. You can check out every word and phrase on the internet. If the overall effect is at times surrealistic, this is intentional. The aim of the debate is to pose and answer the question: Who did 9/11? Israel is the rogue state that is arguably responsible for the greatest mass murder in history: the catastrophe of 9-11. Finally, I wish to apologize in advance for any offense given by this article. “Wildcard. — Comment about Mossad in a report issued by the US Army School of Advanced Military Studies, quoted in the Washington Post on September 10, 2001, the day before 9/11. HUGO CHAVEZ: Don’t be shameless, Mr Blair! 2. 3.

9/11 - Hard Facts, Hard Truth | WTC Building 7 While these intelligence failures suggest at least the reasonable possibility of U.S. government complicity in 9/11, there is a mountain of physical evidence that directly implicates high-level government knowledge and participation in the planning and execution of September 11. Perhaps the most damning evidence lies in the bizarre collapse of WTC Building 7. Anyone familiar with the story of 9/11 knows about the collapse of the WTC North and South Twin-Towers. The official explanation for the collapse is fire - as in fire weakened the building's structural support steel to the point where it could no longer hold its own weight upright. Flames were visible on 3-4 floors of the building, having been apparently ignited by falling debris and ruptured diesel tanks at the base of the structure. Jones specifically references the fire at the Windsor Building in Madrid, Spain in February of 2005, which did not result in total structural collapse. Perhaps this is just wild conjecture. A.

Corporate Media Discredits 9/11 Truth-Tellers By Broadcasting Invalid Conspiracy Theories Whatsupic -- 13 years & counting! I remain in a state of limbo trying to decide what's worse - the carnage that's occurred as a direct result of 9/11 or the fact the true conspirators remain free, many of them adding insult to injury by actively compounding the ungodly level of death & destruction to this very day! As the years have passed I’ve come to believe very few folk remain undecided about 9/11! One either believes the official account or feels the whole thing was a set up! Also it seems, it’s becoming an increasingly arduous task trying to convert people either way. 1). 2). 3). 4). 5). 6). 7). 8). 9). 10). Architect Minoru Yamasaki discussing plans for the World Trade Centre in New York. Aaahhh Minoru Yamasaki! I'll tell you why! I wholeheartedly believe if one is not cognizant of each & every one of the 10 points above, then how can one even voice an opinion, let alone argue with those who've painstakingly researched every aspect of the case? Barack couldn't contain himself!

Paying Attention to 9/11 Related News From the History Commons Groups blog: A large number of entries have been added to the Complete 9/11 Timeline at History Commons. Most of these focus on the events of September 11, 2001, including the actions of White House personnel in response to the terrorist attacks that day, and a number of apparent threats to President Bush and his plane, Air Force One. White House Officials Visited Emergency Bunker during Exercise A new timeline entry describes a training exercise held shortly before 9/11 in which some senior White House staffers were shown to the Presidential Emergency Operations Center (PEOC), a bunker below the White House where numerous government officials went on September 11. Bolten, according to his own recollection, alerted National Security Adviser Condoleezza Rice to the second crash at the World Trade Center after seeing coverage of it on television.

9/11 TRUTH GOES NUCLEAR: Massive Download In Progress . . . It’s time to wake up — before they do it to us again!!! “This 9/11 data dump is so radioactive the US Government will likely collapse. The world will never be the same when nations everywhere see this report!” – Veteran 9/11 Investigator State of the Nation The evidence is now clear and indisputable that the false flag operation carried out on September 11, 2001 was a multi-nation conspiracy. There were other state actors and intelligence agencies involved such as Pakistan’s ISI; however, the US Federal Government and Israel Secret Services are by far the most complicit. Enter Russia … Edward Snowden … and the Alternative News Media When Edward Snowden opted to stay in Russia after fleeing the USA little did he know that the NSA treasure trove he absconded with would serve as the basis for so much 9/11 revelation. As long as the Anglo-American Axis, the European Union, and NATO continue to antagonize and persecute Russia, why would they not continue their “massive download” of 9/11 evidence which indicts the original accusers.