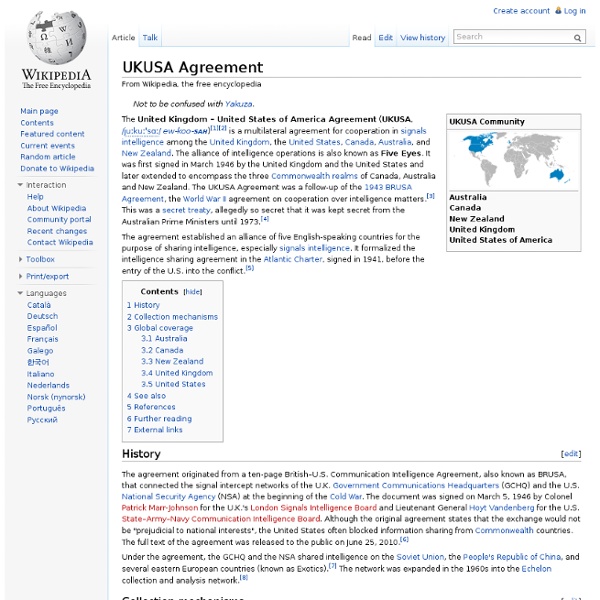 The United Kingdom – United States of America Agreement (UKUSA, /juːkuːˈsɑː/ ew-koo-SAH)[1][2] is a multilateral agreement for cooperation in signals intelligence between the United Kingdom, the United States, Canada, Australia, and New Zealand. The alliance of intelligence operations is also known as Five Eyes.[3][4][5][6][7] In classification markings this is abbreviated as FVEY or the countries are listed like AUS, CAN, GBR, NZL, USA.[8] Emerging from an informal agreement related to the 1941 Atlantic Charter, the secret treaty was renewed with the passage of the 1943 BRUSA Agreement, before being officially enacted on 5 March 1946 by the United Kingdom and the United States. In the following years, it was extended to encompass Canada, Australia and New Zealand. History[edit] Origins (1940s–1950s)[edit] The parties agree to the exchange of the products of the following operations relating to foreign communications:- The agreement originated from a ten-page British–U.S. Five Eyes[edit] Related:  New World Order NWO

FOURTEEN EYES 1943 BRUSA Agreement The 1943 BRUSA Agreement was an agreement between the British and US governments to facilitate co-operation between the US War Department and the British Government Code and Cypher School (GC&CS). It followed the Holden Agreement of October 1942. This led to the signing of the 1943 BRUSA Agreement on 17 May, which was a formal agreement to share intelligence information. It covered: the exchange of personneljoint regulations for the handling and distribution of the highly sensitive material The security regulations, procedures and protocols for co-operation formed the basis for all SIGINT activities of both the US National Security Agency and the British GCHQ. See also[edit] References[edit]

five eye members NINE EYES 1941 Atlantic Charter The Atlantic Charter was a pivotal policy statement issued in August 14, 1941 that, early in World War II, defined the Allied goals for the post-war world. It was drafted by the leaders of Britain and the United States, and later agreed to by all the Allies. The Charter stated the ideal goals of the war: no territorial aggrandizement; no territorial changes made against the wishes of the people; restoration of self-government to those deprived of it; reduction of trade restrictions; global cooperation to secure better economic and social conditions for all; freedom from fear and want; freedom of the seas; and abandonment of the use of force, as well as disarmament of aggressor nations. In the "Declaration by United Nations" of 1 January 1942, the Allies of World War II pledged adherence to this charter's principles. The Atlantic Charter set goals for the post-war world and inspired many of the international agreements that shaped the world thereafter. Origin[edit] British Empire[edit]

additional 9 eyes members US spies on UK for UK Telecommunications industry experts and the pressure group Liberty fear the top-secret US listening-post on the edge of moorland six miles west of Harrogate, is being used by Britain's intelligence agencies and police to avoid the requirement to obtain Home Office warrants authorising tapping. A university computer lecturer who has made a study of electronic eavesdropping told the Independent on Sunday he understood that the 1,760 staff at the heavily-guarded base were used regularly to tap phones in this country. He said: "If the security service wants to tap your phone and wants nobody to know, there are two ways they can do it: illegally - or, entirely above board, ask US personnel at Menwith Hill to do it." Under US law, the phone-tapping of foreign nationals in a foreign country does not require any licence. Even though it is on British soil, Menwith Hill is US-owned and regarded by the US government as under its jursidiction.

Additional 14 Eye Members Israel Special Relations The National Security Agency routinely shares raw intelligence data with Israel without first sifting it to remove information about US citizens, a top-secret document provided to the Guardian by whistleblower Edward Snowden reveals. Details of the intelligence-sharing agreement are laid out in a memorandum of understanding between the NSA and its Israeli counterpart that shows the US government handed over intercepted communications likely to contain phone calls and emails of American citizens. The agreement places no legally binding limits on the use of the data by the Israelis. The disclosure that the NSA agreed to provide raw intelligence data to a foreign country contrasts with assurances from the Obama administration that there are rigorous safeguards to protect the privacy of US citizens caught in the dragnet. The deal was reached in principle in March 2009, according to the undated memorandum, which lays out the ground rules for the intelligence sharing.

1960 AUSCANNZUKUS AUSCANNZUKUS History Early in World War II the lack of communications interoperability between Allied Forces became a matter of concern for all nations. During March 1941 the first high-level proposals to formally structure combined operations between the United States and the United Kingdom were considered. These discussions were the genesis of the current Combined Communications Electronics Board (CCEB). The origins of the AUSCANNZUKUS (A-Z) organization arose from dialogue between Admiral Burke, USN, and Admiral Lord Mountbatten, RN, in 1960. Their intention was to align naval communications policies and prevent, or at least limit, any barriers to interoperability with the imminent introduction of sophisticated new communications equipment.

Stone Ghost STONEGHOST or "Stone Ghost", is a codename for a network operated by the United States' Defense Intelligence Agency (DIA) for information sharing and exchange between the United States, the United Kingdom, Canada and Australia.[1] Other sources say that New Zealand is also participating, and that STONEGHOST therefore connects, and is maintained by the defense intelligence agencies of all Five Eyes countries.[2] STONEGHOST does not carry Intelink-Top Secret information and was previously known as Intelink-C and may also be referred to as "Q-Lat" or "Quad link".[1] It's a highly secured network with strict physical and digital security requirements. The network not only hosts information about military topics, but also about SIGINT, foreign intelligence and national security.[2] 2012 Canadian Spy Case[edit] Royal Canadian Navy intelligence officer Sub-Lt. References[edit]

1942 New World Map Outline of the Post-War New World Map. Published 1942, Philadelphia, PA The map was self-published by Gomberg and offered for sale for $1 in magazines such as American Teacher in 1942 and Survey Graphic in 1944 (seen here). The Outline of the Post-War New World Map was a map completed before the attack on Pearl Harbor[1] and self-published on February 25, 1942[2] by Maurice Gomberg of Philadelphia. Description of proposed territories on map[edit] The map proposes a total of 14 independent sovereign states, 13 of them democracies and 10 of them demilitarized. United States[edit] The United States has 80 states, not including Security Outposts in the Pacific and the Atlantic, gaining all of Canada, Mexico, and Central America, among other places: Protectorates: - Celebes - Hainan - Halmahera Islands - Iceland - Moluccas Islands - Commonwealth of the Philippines - Taiwan Port "Peace-security bases": Dakar and Freetown on the Atlantic coast of Africa United States of South America[edit] Éire[edit]

New World Order Technocrats and the Surveillance State – ClimateViewer News War leads to the erosion of liberty for the benefit of the military-industrial complex. World War II set in motion the destruction of privacy and the formation of an Orwellian Police State controlled by the National Security Agency (NSA) of the United States of America. Under the guise of cooperation and mutual respect, countries signed secret agreements with the NSA to share signals intelligence (SIGINT) which in layman’s terms means your phone calls, instant messages, and more. [1] Shortly after World War II, the United States and its allies built the ECHELON system to spy on land and satellite-based communications worldwide. [2] Their closest allies, dubbed The Five Eyes (FVEY), received privileged treatment from the NSA community wherein these five countries share resources on a grand scale. [3] The Five Eyes are also know as AUSCANNZUKUS, short for AUStralia, CANada, New Zealand, UK, and US. The Fourteen Eyes feed a brain in Nevada at the Utah Data Center. Canadian Forces Sub-Lt.