Essential Movies for a Student of Philosophy - Movie List on mubi 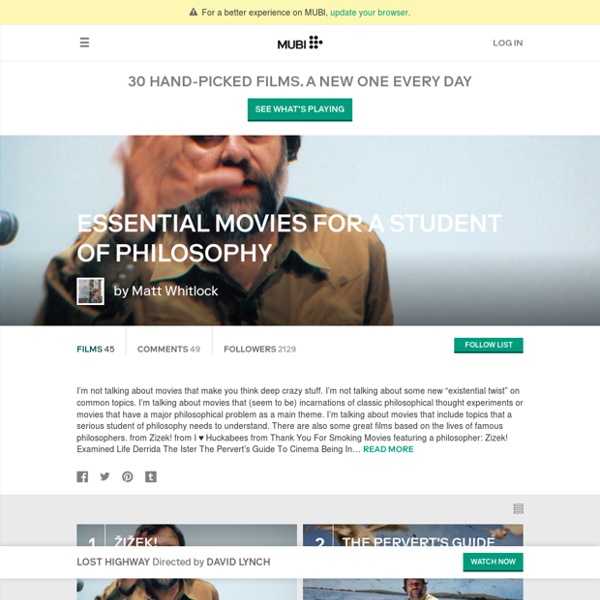 Theory of Knowledge Filmography 'The Oxford Murders' and Knowledge A perfect movie for lovers of Mathematics (the book of the same title is good too). The opening scene is a fascinating anecdote about how Wittgenstein wrote ideas for the Tractatus in a notebook while being fired upon from all directions during the First World War. This is, however, just a prelude to the knowledge question which the philosopher addressed: how can we know the truth? Imagine the irony of the moment as he sat there in the horror of battle. As the opening speech explains, Wittgenstein framed his approach to this KQ through the language and logic of mathematics, hoping to find an answer that would yield the same certainty and absolute rigorous knowledge of mathematical reason.

The 18 Best Philosophical Movies of All Time Whether realizing the art form of filmmaking or not, directors and writers often use their preferred visual medium to tell a story. Ideologies, theories or whatever form of message is always decoded in this visual medium in hopes that the audience gets the message. The secret of making a successful film, especially when telling a story, is to avoid preaching. From Mel Gibson to Seth Macfarlene, Federico Fellini to Ridley Scott and of course Hitchcock, their movies have messages, from symbolist storytelling to clever subtext dialogues. Here’s a list of some of the movies that have philosophical messages encoded for the audience.

Dualism (philosophy of mind) René Descartes's illustration of dualism. Inputs are passed on by the sensory organs to the epiphysis in the brain and from there to the immaterial spirit. In philosophy of mind, dualism is the position that mental phenomena are, in some respects, non-physical,[1] or that the mind and body are not identical.[2] Thus, it encompasses a set of views about the relationship between mind and matter, and is contrasted with other positions, such as physicalism, in the mind–body problem.[1][2] Ontological dualism makes dual commitments about the nature of existence as it relates to mind and matter, and can be divided into three different types:

Best Depressing Movies to Watch - A Good Movie to Watch Renton (McGregor), a Scottish twenty-something junkie, must choose to clean up and get out, or continue following the allure of the drugs and the influence of friends. Find out if he chooses life in this brutal yet entertaining Danny Boyle masterpiece. While definitely not for the faint of heart, Trainspotting still manages to be funny at times, … The Analytics Edge In the last decade, the amount of data available to organizations has reached unprecedented levels. Data is transforming business, social interactions, and the future of our society. In this course, you will learn how to use data and analytics to give an edge to your career and your life. We will examine real world examples of how analytics have been used to significantly improve a business or industry. These examples include Moneyball, eHarmony, the Framingham Heart Study, Twitter, IBM Watson, and Netflix. Through these examples and many more, we will teach you the following analytics methods: linear regression, logistic regression, trees, text analytics, clustering, visualization, and optimization.

The Best Movies For IB Theory Of Knowledge Classes – What Are Your Suggestions? Generally, the only times students in my classes watch full movies are the few times I’m absent (though we’ll often watch short clips), and when I’m not there it usually relates to a school-related meeting. All of the English teachers at our school spend four days each year — two near the beginning and two near the end — to review writing assessments all students in our school do twice a year (you can read all about that process at a previous post). Two of those days are coming-up and, since substitute teachers aren’t allowed to supervise computer use, I’m going to have my IB Theory of Knowledge class students watch a movie.

27 More "Essential Films for the Student of Philosophy," As Suggested By Open Culture Readers A post of ours last week on philosophical films piqued the interest of many a film-loving, philosophically-inclined reader, and raised an important and perhaps unanswerable question: just what is a “philosophical film”? Does such a creature even exist? Reader Albert Hoffman suggested that “a really great movie always is a philosophical movie, always opens the path to important philosophical questions.” I find that statement hard to dispute, but then find myself also agreeing with another reader, Assyouti, who writes “all bad films can be resources for philosophical discussion.” Why not?

Dualism, by Lisa Storrs DualismLisa K. Storrs Most generally, dualism is the view that reality consists of two disparate parts. 12 Mindf*ck Movies Every Guy Should See When you sit down to watch a movie, a lot of the time you want to veg out and give your brain a little rest (see: Every Michael Bay movie). On the rare occasion you want to give your noggin a little workout, here are 12 films that will kick it into overdrive. Each is brilliant but confusing. Prepare to have your mind fucked. Dogtooth Dogtooth doesn’t really have a hard-to-follow plot, but ask anyone who has seen the Greek film, it’s a bizarre trip.

The Science of Everyday Thinking Course Syllabus Skip Syllabus Description EPISODE 1 - A TASTE A taste of things to come, a few questions, and information about the course. EPISODE 2 – ILLUSIONS The way we perceive the world and remember events is, in a very real sense, shaped by the sum of our experiences. As a result, we tend to see what we expect to see. EPISODE 3 - KNOW THYSELF? Who knows why we do what we do, what’s important to us, and how we feel, better than ourselves? 44 Essential Movies for the Student of Philosophy What comes to mind when you hear the phrase “philosophical film”? The Matrix, most likely, an obvious example of a movie—or franchise—that explores timeless questions: Who are we? What is reality? Are our lives nothing more than elaborate simulations programmed by hyperintelligent supercomputers? Okay, that last one may be of more recent vintage, but it’s closely related to that ancient cave allegory of Plato’s that asks us to consider whether our experiences of the world are nothing more than illusions emanating from a “real” world that lies hidden from view.

The brain mechanism behind your inner voice Corollary discharge plays a central role in our motor system. It allows us to correct motor errors before we have committed them and it allows us to prevent confusion between self- and externally-caused sensory events. Dr Mark Scott Year In Review: The 11 Best Short Films of 2011 Over the course of the year, curating the Short Film of the Day feature has given me a deep and affecting appreciation of the art form. Before, I hadn’t given much thought to the little bastards, but the truth is that they are incredibly versatile and representative of the boundaries that film can break. They can be jokes told well or human dramas driven home. They can be a perfect bite or demand to be expanded into a full meal. They can feel classic or break out into the long, strange realm of experimentation.

Søren Kierkegaard: A Free Online Course on the "Father of Existentialism" The playlist above features roughly eight hours of video lectures on Søren Kierkegaard, the “father of existentialism.” They’re presented by Jon B. Stewart, currently a fellow at Harvard’s Radcliffe Institute for Advanced Study, and before that Associate Professor at the Søren Kierkegaard Research Center at the University of Copenhagen. You can watch them independently, or as part of an online course regularly offered by Coursera.