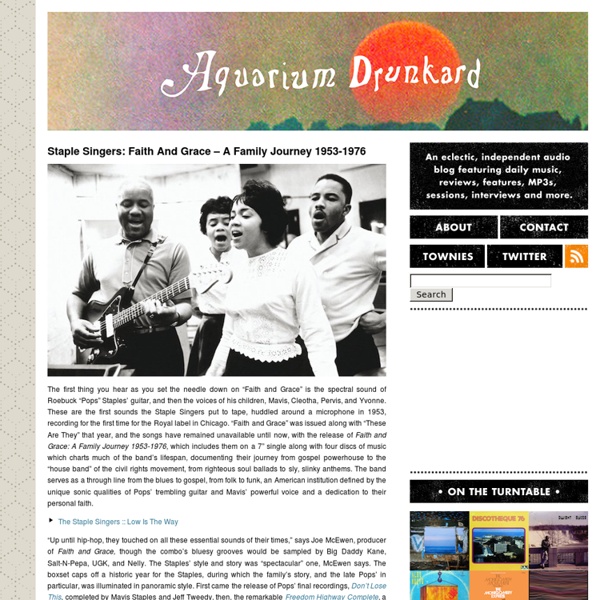 Music is never incidental in a Jim Jarmusch movie. It’s part of his film’s DNA, a through line running through his characters’ black comedy gags and existential wanderings. There’s no stylistic template – everything from crazed blues to ambient drones have soundtracked Jarmusch’s films — but the director ties songs together with an unmatched patience and style. Jarmusch’s films often feel like personalized mixtapes, but for his latest, the vampire romance Only Lovers Left Alive, Jarmusch himself gets in on the action, joining with his band Sqürl and frequent musical collaborator Jozef van Wissem to craft a set of moody, psychedelic goth pop, with guests like Zola Jesus and Madeline Follin, who joins Jarmusch for a take on “Funnel of Love,” as made famous by Wanda Jackson. The languid, stomping pace of the song suggests Sqürl might be familiar with the trick DJ Diddy Wah taught us of playing Wanda’s original 45 at 33 RPM to great effect.

Music For Kids Who Can't Read Good: Denny's is for winners An Album and a Song is a series where I pick a favorite album and song from a year (working up from 1960) for your listening pleasure. One rule: The year’s album and song can not both come from the same artist. Strangely enough, the Abbey Road got mixed reviews on it’s initial release, but retrospectively it’s rightfully considered The Beatles' last and perhaps greatest masterpiece.

this song is sick Posted in Bangin, Video by nick | Tags: 2014, Chance the Rapper, Hip-Hop, LIVE, Lollapalooza Chance the Rapper made a legendary return to his home city of Chicago after gaining a monstrous global following as he played a huge set at the trend setting Lollapalooza music festival. This Sunday's set was a very special one for the rapper as him and his Social Experiment band went through an impressive collection of all the favorites from his popular mixtapes and even managed to slip in a few unreleased new tracks. This was truly something special as the love for his home city resulted in some unreal chemistry. Enjoy! Chance The Rapper | Lollapalooza Live 2014

Swedesplease – The Swedish Music Blog 25 of the Best Music Sites and Blogs for Discovering New Artists and Musicians and Streaming Free Music Your guide to discovering new beats that put you ahead of the game making personal playlists. In today’s music industry, there’s a lot to keep up with, and as much as we love them, Pandora, Spotify and your personal iTunes on shuffle just can’t do it all. That said, we pulled together a list of 25 of our favorite music sites, our go-to sources for finding new tunes, streaming our favorite mixes and above all, staying ahead on our playlists.

Et Musique Pour Tous Wine & Bowties Cover to Cover How unsung Oakland design duo Phunky Phat Graph-X quietly shaped the aesthetic of '90s rap Tumblr, and I guess the Internet in general, has a tendency to play out trends to death. One of the most prevalent of these in the last few years (which I want to say, like many Internet trends, started with the BasedGod) has been the resurgence of Pen & Pixel-style album artwork. Music Blog, Music Videos, Mp3s Le Choix : Accueil The Music Ninja - Discover new music everyday Ad Hoc I AM FUEL, YOU ARE FRIENDS Free mp3s, music reviews, videos J'ai tout lu, tout vu, tout bu... MissInfo.tv