Know Every Note on the Guitar in 9 Days 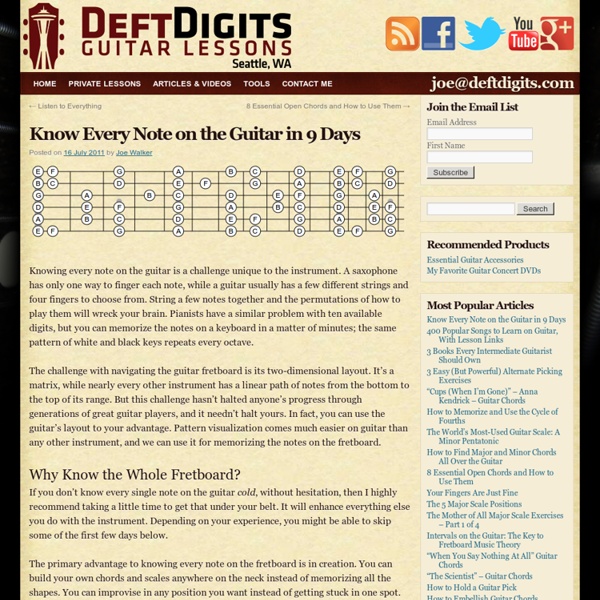 Knowing every note on the guitar is a challenge unique to the instrument. A saxophone has only one way to finger each note, while a guitar usually has a few different strings and four fingers to choose from. String a few notes together and the permutations of how to play them will wreck your brain. Pianists have a similar problem with ten available digits, but you can memorize the notes on a keyboard in a matter of minutes; the same pattern of white and black keys repeats every octave. The challenge with navigating the guitar fretboard is its two-dimensional layout. It’s a matrix, while nearly every other instrument has a linear path of notes from the bottom to the top of its range. Why Know the Whole Fretboard? If you don’t know every single note on the guitar cold, without hesitation, then I highly recommend taking a little time to get that under your belt. The primary advantage to knowing every note on the fretboard is in creation. Day 1: Open Strings Day 3: First Three Frets Conclusion

Easy Guitar Chords-Basic Guitar Chords Basic Major Chords (M) Major chords are the base from which most guitar songs are built. If you notice the A Chord has two 2's and a three. This is the way I play the chord. "The Mind as the Software of the Brain" by Ned Block Ned BlockNew York University 1. Machine Intelligence 2. Intelligence and Intentionality 3. The Chord Guide: Pt I – Chord Progressions Chord progressions are the canvas on which musicians paint their masterpieces, and it’s a canvas which is a piece of art in itself. A chord progression can be subtle and in the background or it can be blatant and up front; it can be simple and catchy, or it can be technical and complex, it can stay in one key or it can change like the seasons. In any of these cases a chord progression is what drives the song as it literally shapes the music that accompanies it. Chord progressions are like a cozy home where melody and rhythm can kick their feet up. All the songwriting giants, like John Lennon, Paul McCartney, George Harrison, and Bob Dylan, to name a few, have/had a tremendous knowledge of the art of the chord progression.

English 50 Exercises for Story Writers English 50 – Intro to Creative Writing: Exercises for Story Writers Basic Theory: What is a short story? As soon as someone delivers a definition, some good writer will write a story that proves the theory wrong. Theme and Variations - Keys A key defines the collection of pitches to be used in a given piece or section. That is, if a piece is in the key of C major, the majority of pitches will be those found in the C major scale. The tonic and dominant scale degrees are considered the most important, and since the key defines which pitches fill these roles, it also helps establish which pitches will be the most important in a given piece or section. Once we know what scale we will be using, we also know that the harmonic content will be drawn from that scale.

INFJ Personality (“The Advocate”) “Treat people as if they were what they ought to be and you help them to become what they are capable of being.” The Advocate personality type is very rare, making up less than one percent of the population, but they nonetheless leave their mark on the world. Advocates have an inborn sense of idealism and morality, but what sets them apart is that they are not idle dreamers. Music, Mind, and Meaning This is a revised version of AI Memo No. 616, MIT Artificial Intelligence Laboratory. An earlier published version appeared in Music, Mind, and Brain: The Neuropsychology of Music (Manfred Clynes, ed.) Plenum, New York, 1981 Why Do We Like Music?

Secret Teachings of All Ages: The Pythagorean Theory of Music and Color Index Previous Next HARMONY is a state recognized by great philosophers as the immediate prerequisite of beauty. A compound is termed beautiful only when its parts are in harmonious combination.