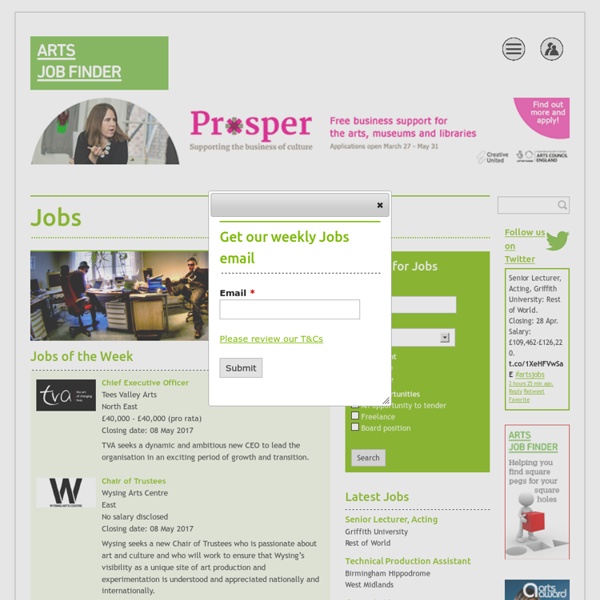 £40,000 - £40,000 (pro rata) Closing date: 08 May 2017 TVA seeks a dynamic and ambitious new CEO to lead the organisation in an exciting period of growth and transition. Wysing seeks a new Chair of Trustees who is passionate about art and culture and who will work to ensure that Wysing’s visibility as a unique site of art production and experimentation is understood and appreciated nationally and internationally. £27,668 - £31,601 (per annum) Closing date: 23 Apr 2017 Rugby Art Gallery and Museum has an exciting opportunity to welcome a person with visual art curatorial experience to our friendly team. Northern Heartlands Great Place Scheme £45,000 - £45,000 (per annum) Closing date: 24 Apr 2017 We are seeking a Director to take responsibility for the overall management and successful delivery of the Northern Heartlands project, to manage the staff team to deliver the programme and to drive the partnership forward. £35,000 - £35,000 (per annum) Closing date: 18 Apr 2017

GEM home page Vacancies Trustees Sherman Cymru Salary: Apply by: Fri 6 Feb 2015 Job Specification Sherman Cymru, Cardiff’s producing and presenting theatre is seeking Trustees to join their Board. Sherman Cymru’s Mission is to a) make and present great theatre and live performance, in Welsh and in English, that is excellent, ambitious and memorable for its audiences. b) to engage our communities in the creative process of theatre making and to contribute to the national development of theatre in Wales. We are looking for Trustees who will see the beyond the horizon as well as the detail; who will provoke, encourage and facilitate staff in a way that helps nurture and nourish the on-going and developing governance needs of the charity.We are looking to add to the diversity of our Trustees with experience/knowledge and skills in the following areas: Fundraising, Commercial Trading, Income Generation, Playwriting, Arts Marketing/Audience Development, Finance, Creative Learning/Teaching/Youth Theatre.

How to: Get a job in the music industry - The Big Music Project Very few industries are more exciting to work in than the music industry. We’re not saying that it is all glitz and glamour – it’s hard work, more so now than ever! We know that it isn’t always easy to get your foot in the door of the industry – but it is possible. First and foremost, it is important to be clear about the role you want within the industry and work towards the skills required to fulfil it. Like any other industry, the record industry wants to recruit and retain the very best talent from within the worlds of digital, marketing, A&R, communications, sales, and much more. There is no magic formula for getting that dream job, but you can help yourself along the way. 1. Don’t just say that you want to work in the music industry – identify the skills you have and the way in which you could apply those to a job in the business. 2. The industry offers a number of internships – paid and unpaid – each year to those who demonstrate passion and enthusiasm for music. 3. 4. 5. 6. 7.

Jobs Desk The UK's most extensive free vacancy listing source for museums and galleries. Jobs advertising on this website is always FREE. The Jobs Desk is updated on Thursdays. Entries close at 12 noon on the day of the update. Job Type Key While we make every effort to ensure that wordings, salaries and conditions in job advertisements are correct, these are a guide only; the University of Leicester and its staff accept no responsibility for loss or inconvenience through inaccuracy, omission or misunderstanding. Arts Culture Media Jobs (ACM) - the job website for creative people. AMERICAN THEATRE | Whitewash ‘In the Heights’? Chicago, You Can Do Better Samantha Pauly with the cast of "Evita" at the Marriott Theatre. (Photo by Liz Lauren) Last week, Chicago’s Porchlight Music Theatre released the cast list for its upcoming production of In the Heights, Lin-Manuel Miranda and Quiara Alegría Hudes’s musical set in the predominantly Latino neighborhood of Washington Heights in New York City. Almost immediately, a number of people noticed that while a majority of the cast featured Latinos, the show’s lead and narrator, Usnavi—an immigrant from the Dominican Republic played by Miranda in the original Off-Broadway and Broadway productions—will be played by a white actor, Jack DeCesare. The creative team is also predominantly non-Hispanic white. This news follows another Chicago casting controversy from earlier this year, when Marriott Theatre announced the cast for its production of Evita, a show set in Argentina, that featured only one Latino actor. These roles were written by Latin@s for Latin@ actors. Edited to add.

The Art Newspaper Association of British Orchestras The ABO's primary event each year is its annual conference, the major gathering of the classical music industry in the UK, with over 300 delegates drawn from orchestras both from within the UK and abroad, plus funding agencies, venues, agents, publishers and suppliers. Our Principal Media Partner is Classic FM and Rhinegold Publishing is our print media partner. The 2019 Conference will be held in Belfast from 23-25 January 2019, hosted by Ulster Orchestra. We are now looking for a conference assistant to join the ABO team for 8 weeks in the run-up to and for the duration of the conference. This year, the Conference Assistant will also have the opportunity to attend an ABO Board meeting and the ABO’s Annual General Meeting on 27 November and also assist with preparations for a Scottish Parliament event in December 2018. For more information, please download the Job description here. Contact: Emma Nevell, Office and Events Administrator | Email: Emma@abo.org.uk