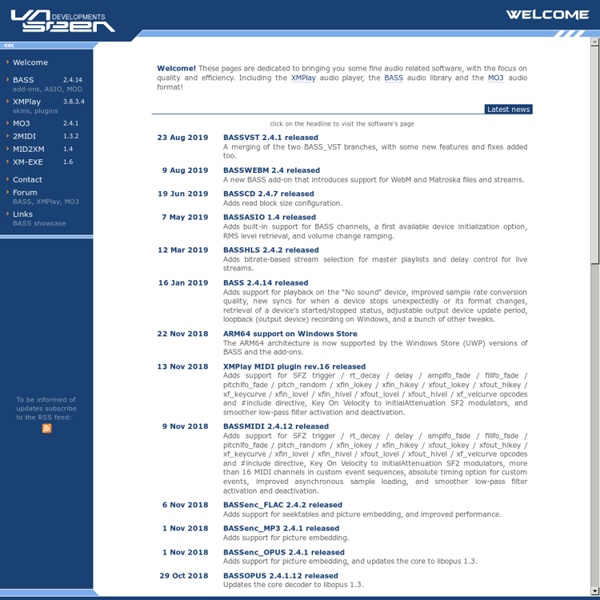 30 new music apps for iPhone, Android and iPad There's something of an explosion in music apps happening on iPhone and Android at the moment, from official artist apps that look to go beyond pure news and audio samples, through to social location services aimed at gig-goers. Here's a list of 30 apps that have launched in the past few months, from big stars and startup developers alike. It offers a glimpse at the trends and technologies that make apps as potentially habit-changing for music fans as they are for gamers and TV viewers. Note, this list is focused on apps that involve listening to or interacting around music, rather than actually creating it.

woolooloo - An open source framework on top of the reacTIVision project to allow for higher-level projects. Tacchi is a project written in Java that combines the multi-touch/fiducial recognition functionality of the opensource reacTIVision ( and Community Core Vision ( projects with the strength of Supercollider ( in the form of JCollider ( and the strength of the Java 2D libraries to allow for an opensource alternative to the Reactable ( The project will also end up being host to higher-level GUIs and projects on top of the TUIO client framework including music mixing, games, etc. A short demonstration video can be found here, since Google Code does not support Vimeo embedding. If all goes well, the project will also be home to instructions to build your own DIY reactable using parts that can be purchased from stores, and a projector/camera combination.

The Miles Sound System The Miles Sound System is one of the most popular pieces of middleware ever released. It has been licensed for over 5,200 games on 14 different platforms! John Miles first released MSS in 1991 in the early days of PC gaming. Today, Miles features a no-compromise toolset that integrates high-level sound authoring with 2D and 3D digital audio, featuring streaming, environmental reverb, multistage DSP filtering, and multichannel mixing, and highly-optimized audio decoders (MP3, Ogg and Bink Audio). New!

Decode MP3 Audio Data To PCM Audio Format In Android Sponsored Links: Related Forum Messages: Android :: Determining Audio Format Of Audio Files Is there a way to determine the audio format of an audio file in Android? Johnny Chung Lee - Projects - Wii As of June 2008, Nintendo has sold nearly 30 million Wii game consoles. This significantly exceeds the number of Tablet PCs in use today according to even the most generous estimates of Tablet PC sales. This makes the Wii Remote one of the most common computer input devices in the world. It also happens to be one of the most sophisticated. It contains a 1024x768 infrared camera with built-in hardware blob tracking of up to 4 points at 100Hz. This significantly out performs any PC "webcam" available today.

The ABC Music project - abcMIDI Maintainer: Seymour Shlien Download the latest abcMIDI Go to James Allwright's original abcMIDI page. abcMIDI is a package of programs developed by James Allwright for processing ABC music notation files. Beardyman's favourite music software Bit Shape TC-11 “This iPad app is one of the most unique synths ever made. It measures metadata from your touches, giving you the ability to intuitively control hundreds of variables: time since last touch; average speed of movement; speed of first, second, third touch; distance between touches... It’s unique and sounds fucking insane.