25 Independent Record Labels You Should Know. By Monster, Joyce Ng, Caitlin White & Brendan Klinkenberg If you're reading this article, chances are you've previously poked around some of the other pages on Pigeons & Planes before landing here. 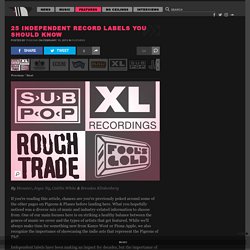 What you hopefully noticed was a diverse mix of music and industry-related information to choose from. One of our main focuses here is on striking a healthy balance between the genres of music we cover and the types of artists that get featured. While we'll always make time for something new from Kanye West or Fiona Apple, we also recognize the importance of showcasing the indie acts that represent the Pigeons of P&P. Independent labels have been making an impact for decades, but the importance of their work is more evident than ever. Mezzrow jazz club. The Bell House » Kevin Devine – Tickets – The Bell House – Brooklyn, New York – December 11th, 2015. Kevin Devine is an American songwriter and musician from Brooklyn, New York, who is known for alternately introspective and political lyrics and melodic acoustic guitar tunes. 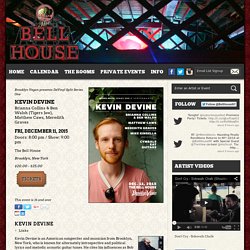 He cites his influences as Bob Dylan, Elliott Smith, Guns N' Roses, Brother Paramo and Nirvana, among others. He grew up in Brooklyn and Staten Island, and has spent significant time in Manhattan and Queens as well. Devine graduated Fordham University at Lincoln Center in 2001, majoring in journalism. He also played in an indie/punk/emo band called Miracle of 86 after the (Miracle) New York Mets.

Even before that, he played with a popular band in the local Staten Island scene called Delusion. During this time he also appeared in regular stints at the Wetlands Preserve. Devine was able to gather a strong fan base as a result of his exposure through touring with Brand New. Mason Jar Music. Past Projects: The Storm is Passing Over - A Hurricane Sandy Benefit Album by Mason Jar Music & Friends - Featuring: Abigail Washburn & Béla Fleck, Rosanne Cash, Aoife O'Donovan (w. 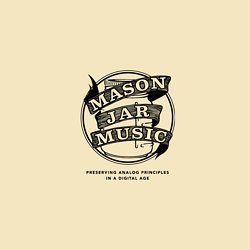 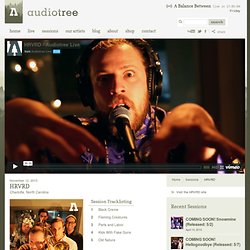 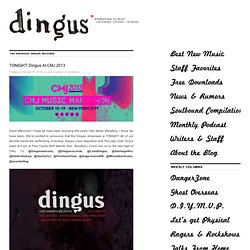 I hope all have been enjoying this years CMJ Music Marathon, I know we have been. We’re excited to announce that the Dingus showcase is TONIGHT. All of our favorite bands are performing, including: Happy Lives, Napoleon and The Ugly Club. Doors open at 4 pm at Free Candy (905 Atlantic Ave., Brooklyn). Fresh Out Of The Oven. Calendar – The Rock Shop. FYF PRESENTS VANS HOUSE PARTIES - 2013. Welcome to First City Festival. » James Blake – Tickets – Terminal 5 – New York, NY – November 6th, 2013. It all started, says James Blake, with Joni Mitchell. 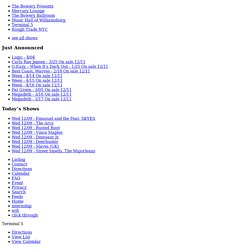 His favorite singer and songwriter came to see him at the Troubadour in Los Angeles two years ago and hung around afterwards to talk. "She's an oracle," smiles James. "I learned a lot just from meeting her. " What they talked about most was the idea of permanence—how to survive and thrive as an artist. On the flight back to London James wrote “Overgrown”, the gently immense song which lends its name to his highly anticipated second album. Most importantly, touring the debut led him to meet his girlfriend, whose presence (and sometimes absence: she lives in Los Angeles) gives Overgrown its considerable emotional weight. “This past year has been intense,” says James. Their transatlantic relationship informs songs, such as the extraordinary electronic soul of the single “Retrograde”, which evoke both intimacy and distance. “He said songs are what people remember and you need to write some,” James adds. Lincoln Center for the Performing Arts.