Enlighten Education - Self Esteem & Resilience Education For Girls. Theconversation. Most women who face economic abuse do not see it as family violence. 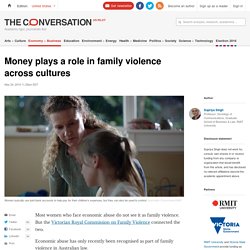 But the Victorian Royal Commission on Family Violence connected the two. Economic abuse has only recently been recognised as part of family violence in Australian law. The Royal Commission report places economic abuse within the wider framework of economic gender inequality. Following Good Shepherd’s formulation it defines economic abuse as behaviours that “control a woman’s ability to acquire, use and maintain economic resources, thus threatening her economic security and potential for self-sufficiency”. The examples range from restricting women’s access to funds, not allowing women to work or study, restricting mobility, having women take on debt that only benefits the perpetrator, or threatening to cut off services. The Royal Commission recommends improving the understanding of economic abuse and improving financial literacy.

Another woman told of how her wages went to the joint account. 160+ Examples of Male Privilege in All Areas of Life For You To Reflect On and Address. We Need To Change Our Thinking About Violence. Dr Melinda McPherson argues that the way we think about male violence runs the risks of entrenching it in our society forever. 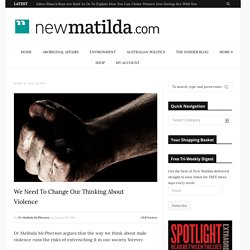 *I have written this article knowing that information continues to emerge in the Port Lincoln case. I want to acknowledge this week’s statement by Melissa Little expressing the depth of love for her partner and children, and consequently the depth of her pain. Men really need to stop calling women crazy. By Harris O'MalleyJuly 9, 2014 Harris O’Malley is a dating coach who provides geek dating advice at his blog Paging Dr. 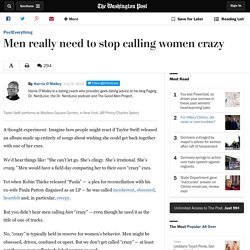 NerdLove, the Dr. NerdLove podcast and The Good Men Project. The bear in this video is a brilliant metaphor for rape, and it's hilariously done. Ignore a huge crisis, and maybe it will go away? 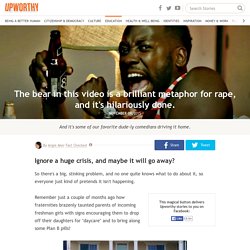 So there's a big, stinking problem, and no one quite knows what to do about it, so everyone just kind of pretends it isn't happening. This magical button delivers Upworthy stories to you on Facebook: Remember just a couple of months ago how fraternities brazenly taunted parents of incoming freshman girls with signs encouraging them to drop off their daughters for "daycare" and to bring along some Plan B pills? Campus rape is a huge problem. She Warns Dad About The Boys At School, But Watch When He Drives Away. I'm Speechless. According to the World Health Organization, one in three women worldwide will experience physical or sexual violence in their lifetime, usually from a male partner. 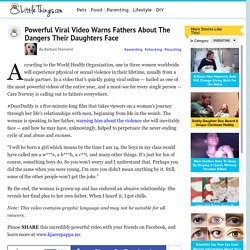 In a video that’s quickly going viral online — hailed as one of the most powerful videos of the entire year, and a must-see for every single person — Care Norway is calling out to fathers everywhere. #DearDaddy is a five-minute-long film that takes viewers on a woman’s journey through her life’s relationships with men, beginning from life in the womb. The woman is speaking to her father, warning him about the violence she will inevitably face — and how he may have, unknowingly, helped to perpetuate the never-ending cycle of and abuse and excuses. “I will be born a girl which means by the time I am 14, the boys in my class would have called me a w***e, a b***h, a c**t, and many other things. Respect – more than just a word. ROAR for Good. It Looks Like A Normal Purse — But See That Black Clip? This Could Save Your LIFE!

Violence against women is an extremely serious problem, and it leaves many asking the question, “What can we do about it?” 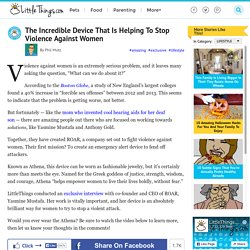 According to the Boston Globe, a study of New England’s largest colleges found a 40% increase in “forcible sex offenses” between 2012 and 2013. This seems to indicate that the problem is getting worse, not better. But fortunately — like the mom who invented cool hearing aids for her deaf son — there are amazing people out there who are focused on working towards solutions, like Yasmine Mustafa and Anthony Gold.

Together, they have created ROAR, a company set out to fight violence against women. Their first mission? This new 'sexual consent and tea' video from Thames Valley Police is brilliant. Sex and consent is a difficult issue, mainly because something that seems so simple is continually ‘misunderstood’ in rape cases.

Thames Valley Police have highlighted the issue by promoting a cartoon comparing sex to a well known British pastime – drinking a cup of tea. The result is this simple, effective and at times quite funny video, which gives clear instructions as to what constitutes as sexual consent. The Brave Girls Alliance  #BraveGirlsWant - Brave Girls Want Change! I Think Majority Of Women Have Had A Male Friend Do This For Them. Get the latest stories from viralwomen on your feed! 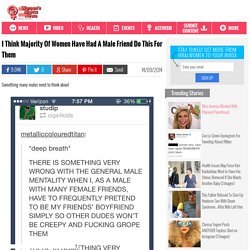 Watch what happens when men are Photoshopped out of politics. Recently, world leaders gathered in New York to commit to the new sustainable development goals. 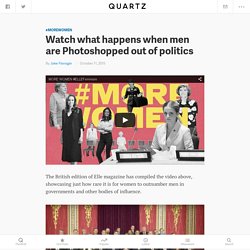 For the first time, a specifically urban goal is among the 17 goals to be achieved by 2030. This goal is to “make cities and human settlements inclusive, safe, resilient and sustainable”. It reflects growing recognition that human development depends on how well urbanisation is managed. According to Dr Joan Clos, Executive Director of UN-Habitat and former mayor of Barcelona, the global view of “cities as containers of problems” must change.

Cities are, in fact, “accelerators of development”. This is important for Africa, where despite high urbanisation rates the development focus has been primarily rural. Ghana demonstrates how cities can be highly productive in Africa. Similarly, the Nairobi metropolitan region generates at least 50% of Kenya’s GDP. Theconversation. There are many barriers to ending an abusive relationship, and financial worries are often a major consideration. 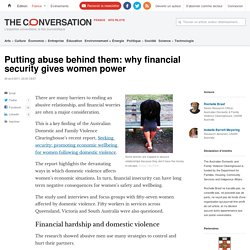 Fifty workers in services across Queensland, Victoria and South Australia were also questioned. Financial hardship and domestic violence The research showed abusive men use many strategies to control and hurt their partners. They often try to undermine women’s confidence, isolate them from friends and family, and take away their financial resources. Theconversation. Australia is making long-overdue moves aimed at stopping domestic violence.

These responses focus almost exclusively on physical injury and death. Consequently, we are not recognising the existence and impact of less obvious forms of abuse that damage women’s well-being. One particularly widespread and insidious example is economic abuse. What it is. Step aside, Barbie, this looks like a job for the new breed of girls’ superhero action dolls. Walk into any toyshop in the world and the chances are you’ll be greeted by row upon row of big-breasted dolls with bee-stung lips and doe-eyes, wearing hardly any clothing. Now a new range of dolls, designed by women following creative input from girls, aims to break that mould. SuperHero Girls transports DC Comics superheroes such as Batgirl, Supergirl and Wonder Woman back to their teens and is made by toy giant Mattel, best known for former behemoth Barbie.

The dolls will arrive in stores in early 2016, alongside an animated TV show, a series of books and a tie-in with Lego. Michelle Obama : ‘There Is No Boy Cute Enough or Interesting Enough to Stop You From Getting Your Education’ A hashtag shouldn't make men fear for their lives. They already have a safe space – most of the world. Life in this society being, at best, an utter bore and no aspect of society being at all relevant to women, there remains to civic-minded, responsible, thrill-seeking females only to overthrow the government, eliminate the money system, institute complete automation and destroy the male sex.

If I put this on Twitter would you call the police? It’s the best first line of anything ever. What Is Fempathizing? 5 Ways to Recognize This Act of Internalized Sexism. If you’re like me, despite your best efforts, you sometimes hear yourself saying things in social settings that sound downright pre-recorded – from, like, the middle of the last century. Maybe you smile, shrink, and say “I’m sorry” when a guy just got in your way. Or you say “Oh, it’s okay,” after someone asks if a comment was offensive, and actually, it was. And you wonder, What was that? Why can’t I rewind and undo it? This is the power of socialization, my friends. Condos in Ho Chi Minh City connected by roof gardens.

When we first showed the work of Vietnamese architect Vo Trong Nghia, it was his glorious tube house that had a wall of white planters. Now he has built a condominium housing project for Ho Chi Minh City that looks like that early project writ large. © Vo Trong Nghia via Designboom It's composed of three twenty-two storey towers with roof gardens connected by suspension bridges, turning it into a giant linear garden. Designboom notes that "with many current developments in Ho Chi Minh City expediting the loss of greenery, the roof garden feature and green screen façade is regarded not only as a dedication to the comfort of inhabitants, but also a contribution to the wider urban landscape. The bamboo in the planters will shade the apartments from the sun, and evidently also provide "structural flexibility against storms.

" Documentary reveals Vo Trong Nghia, Vietnam's visionary bamboo architect (Video) Rapidly developing nations are a wild frontier of sorts for sustainable design and architecture; often building codes are lax or non-existent here, allowing local architects to experiment more freely with unconventional ideas and materials. Vietnamese firm Vo Trong Nghia Architects is one of these pioneers, having made their name with their award-winning projects made out of bamboo, as part of a larger movement to re-define a locally appropriate architecture that is distinctly Asian, affordable, durable and environmentally friendly.

Listening to voices of domestic violence and other talking points. John Paul Langbroek brought me to boiling point the other week with his comments about domestic violence. Domestic violence: five women tell their stories of leaving - the most dangerous time. Home - Our Watch. What I've learned about domestic violence in my year reporting on it. Takepart. Top Stories - Charlie Pickering: Instead of blaming women, let's make men accountable. Snappy response to sexist harrasser. It’s time to make emotional abuse a crime. Kind Campaign. Send This Instead » App. The “Send this Instead” app empowers kids giving them a voice when they are under pressure to send intimate images of themselves online.

Female Superheroes...Who Wear Clothes (PHOTOS) Eight things to do when men dominate the room. She Wants To Look Like Her Mom. What That Means Might Make You Wince. Geena Davis Institute on Gender in Media. Our Core Values. Women and Hollywood. What Does it Mean that Most Children's Books Are Still About White Boys? Neoliberal neopatriarchy: the case for gender revolution. 'Too Much Estrogen': The Golden Globes, Chris Christie and Men Who Don't Want to Share Culture. Sports Direct under fire for 'Girl Stuff' toy cleaning set. Girls on Film: Hollywood's 4 percent problem. Enjoy A Few Moments Of Messed-Up Messages, Created And Shared By The Beauty Industry. Here It Comes. Miss Representation. Women: Know Your Limits! Harry Enfield - BBC comedy. Watch A Student Totally Nail Something About Women That I've Been Trying To Articulate For 37 Years.

Children at play: The war on pink. Van Badham battles the Brosphere: On women, trolls and the Australian media in 2013. Welcome to WEAVE - Women Everywhere Advocating Violence Elimination Inc (Australia) When God Was a Woman. A-märkt.se. SmartSafe. Rape in India: Satirical Video About Victim-Blaming Goes Viral. Anna in Frozen: Her eyes are bigger than her wrists. 5 Minutes Of What The Media Actually Does To Women. Why young women being aware of gender inequity is good news.

Killing Us Softly 4 - Media critic Jean Kilbourne uncovers a pattern of sexism and misogyny across a range of print and television advertisements in this latest edition of her influential and award-winning Killing Us Softly series. Racial and Gender Differences in the Relationship Between Children’s Television Use and Self-Esteem. Overview_copy. Curriculum. The Representation Project.